The nephew of an Anzac soldier killed in World War I says he was staggered to learn of the existence of a war diary, which was handed to him at Melbourne’s Shrine of Remembrance on Saturday.

The diary of Morris Milliken was found among the papers of another Gallipoli veteran, John O’Callaghan, by Mr O’Callaghan’s great-grandson, who traced Mr Milliken’s relatives. 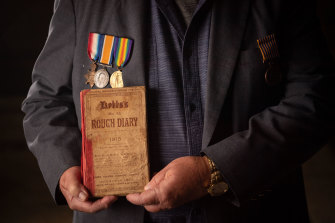 Malcolm Milliken, 81, who travelled from his home in Nelson Bay, NSW, to Melbourne to accept the diary, is keen to find out more about Morris Milliken, the uncle killed at Gallipoli before Malcolm was born.

Morris, who came from a farming family in Tatuanui, in New Zealand’s north, wrote in neat cursive script, but the diary captures the precarious nature of life at Gallipoli.

On June 25, 1915, second lieutenant Milliken writes about washing his kit, and writing to his mother.

The next day, he reports that a fellow Auckland Mounted Rifles soldier was killed. “A shell went right through him before bursting.”

On June 17, Mr Milliken told of the enemy, the Turks, lobbing shells. One colleague is killed by shrapnel and another badly wounded. 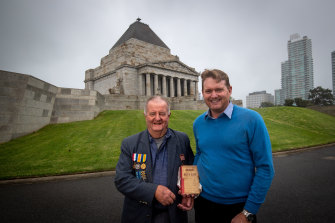 As if in shock, Mr Milliken intersperses this entry by describing farmers ploughing and herding cattle on nearby fields. “It looks so tempting, one feels inclined to go out there for a stroll,” Mr Milliken writes.

Shepparton teacher Clark Pettigrew, 45, found the diary 18 months ago among papers of his own beloved great-grandfather, or “papa” – Australian 13th Lighthorse Regiment soldier John O’Callaghan, who survived World War I and died in Shepparton in 1985, age 92. 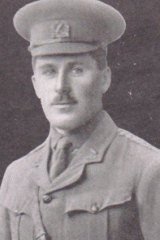 Morris Milliken, the diary’s author, who was killed at Gallipoli on August 8, 1915. Credit:Milliken family

Marcus’s father, Malcolm, who accepted the diary on behalf of the family, said he was “staggered and surprised” at the diary find.

He thanked the Pettigrews. “So many people probably would have thrown it away as rubbish, not thinking about what it was,” he said.

It’s not known how the diary ended up with the O’Callaghans, who are not related to Mr Milliken. 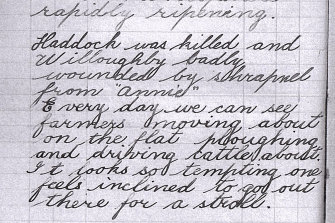 An extract from Morris Milliken’s World War I diary.

One theory is that the diary was mixed up with Ben’s relics and sent to Ben’s family in Australia. John’s and Morris’s units had shared camps.

Or John could have found the diary while fighting in Gallipoli in late 1915.

Mr Pettigrew is pleased to hand over the diary, saying it belongs with the Millikens.

“It’s theirs. It’s their history,” he said. “I couldn’t imagine someone else having my own papa’s diary. I put myself in their shoes.”

*The 2021 dawn service at the Shrine is going ahead at 5.40am on Anzac Day, April 25, but due to government restrictions, there is a limit of 1400 people, with entry by free booked tickets only. Bookings open at 11am on April 15 at www.shrine.org.au/anzac-day-2021

Family, Im, See, So, staggered
You may also like: