Follow
Home » World News » In Comerío, Puerto Rico, Hurricane Fiona has left people without water, food and medicine: 'We are not OK'

In Comerío, Puerto Rico, Hurricane Fiona has left people without water, food and medicine: 'We are not OK'

COMERÍO, Puerto Rico — Maria de Jesus Medina stands in her nightgown and looks across at her soaked belongings – a couch and loveseat, a television stand, two bedroom sets, a stove, a refrigerator, clothes and boxes of personal items – all destroyed by a hurricane.

For the second time in five years.

When torrential rains poured down on this center-eastern region of Puerto Rico this week, a nearby river and creek flooded rapidly, sending muddy water into Medina’s first-floor apartment and those of her neighbors.

“I lost a lot of belongings, some very precious things,” Medina, 83, told USA TODAY in Spanish on Wednesday. “Almost all of our food has spoiled.”

HURRICANE FIONA LEAVES A ‘NIGHTMARE’ IN PUERTO RICO: The power is out. Homes and roads are flooded.

Days after Fiona hit the territory as a Category 1 hurricane, more than a million people remained without power on Wednesday, said Keith Turi, FEMA assistant administrator for recovery. And the Puerto Rico Aqueduct and Sewer Authority said about 45% of its subscribers were still without water service.

More than 1,000 people were in shelters early Wednesday, said Brad Kieserman, vice president of operations and logistics for the Red Cross.

“That just gives you a sense of the number of people that continue to be displaced by the storm,” Kieserman said. 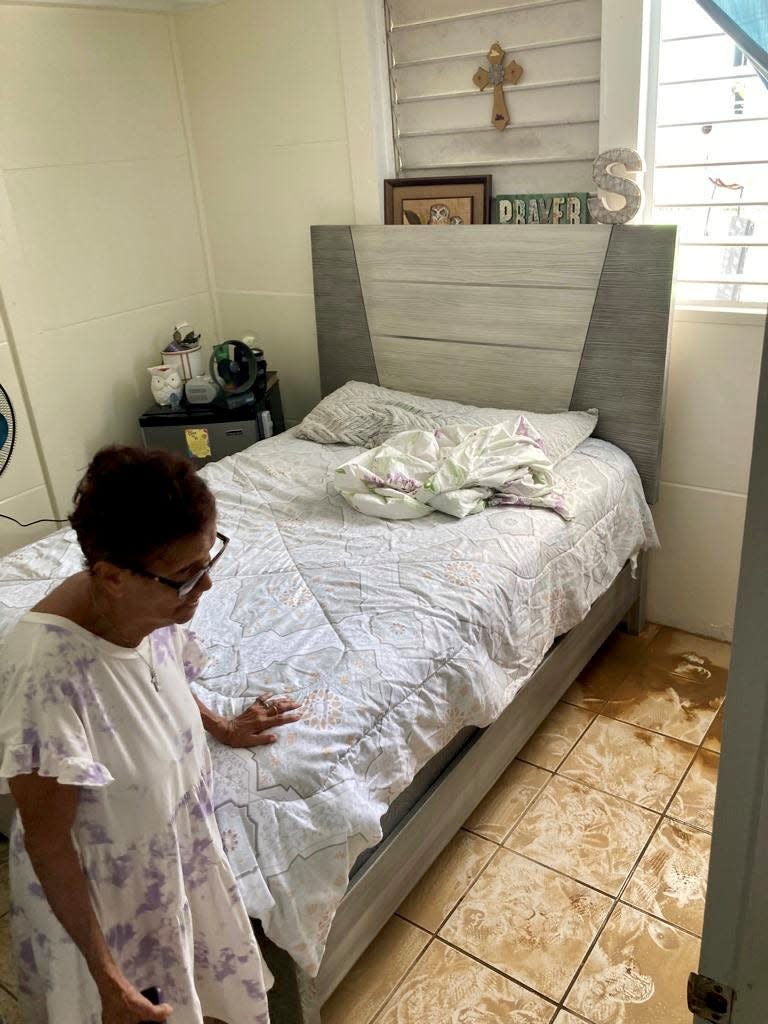 Public health officials in Puerto Rico are working to ensure residents who use electricity-dependent care, such as dialysis or oxygen, are receiving it.

Some health care centers were running on generators, and one cancer hospital had to transfer patients because of power issues, said Alexandra Lúgaro, 41, executive director of the non-profit Foundation for Puerto Rico’s Center for Strategic Innovation and a former candidate for governor.

“(People) are very scared that they’re not going to be able to use their medical equipment or refrigerate medications,” Lúgaro told USA TODAY.

That includes Medina’s daughter, Jesusa Vilches, 60. Flooding in Comerío damaged a small refrigerator where Vilches, who is diabetic, stored her insulin. Now she has nowhere to keep it and hasn’t had a dose in days.

“We are not OK,” Medina said. “It’s difficult to keep it together, to try and get back up again.” 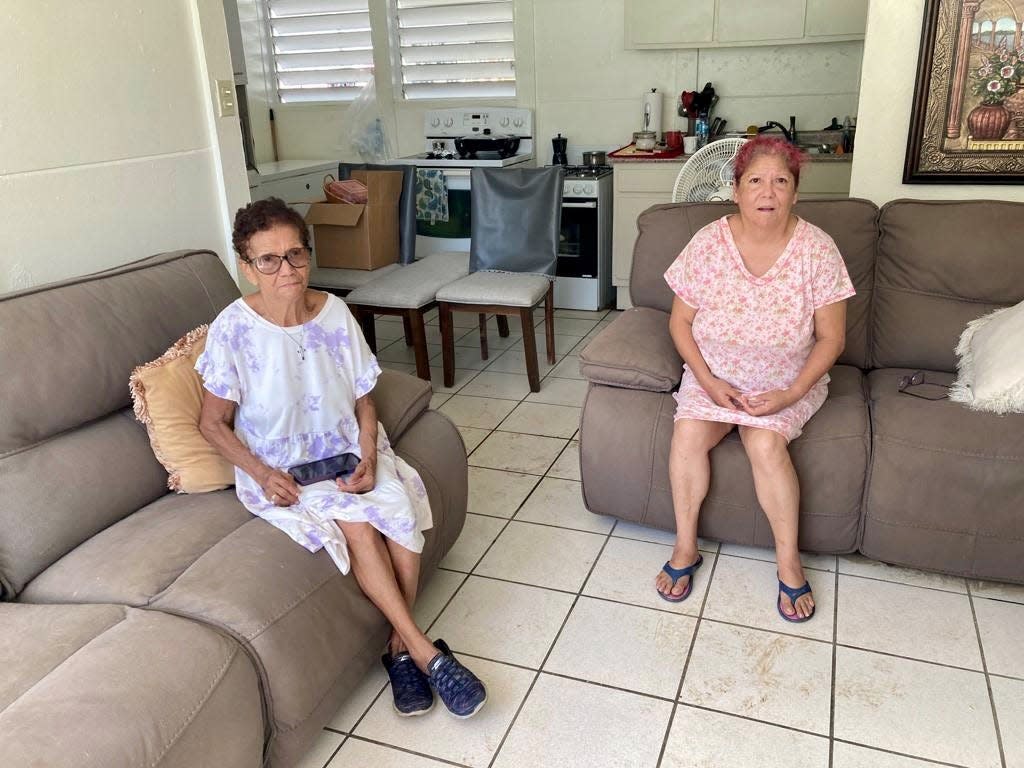 Medina and her daughter said they are running low on food and potable water. They don’t have a car, so it’s difficult to make a trip to get ice, if any is even available. The main grocery store in town, the Econo next to Rio de la Plata, flooded Sunday and was closed for days. It reopened Wednesday.

Medina said she moved to the apartment in the Ariel neighborhood in what was supposed to be a temporary relocation after Hurricane María destroyed her house further up the hill. She said officials told her she would be in the apartment for 4 to 5 months. It’s been five years.

“They moved me down here into a flood zone,” Medina said. “And, well, it was destined to flood again.”

Floodwaters also entered the home of Nereida Rivera, 60, one of Medina’s neighbors in Comerío, some 30 miles south of the island’s capital of San Juan. She said much of her furniture is ruined. She passed the storm in her daughter’s home up the hill and came back after as her family helped her clear out mud, water and debris.

“What affects you emotionally is knowing how you had your home versus how you find it,” Rivera said in Spanish. “You get sad because you lost things of value.”

Her most urgent need, she said, is water so she and her husband can cook for their 8-year-old grandson, Jayden Ramos. 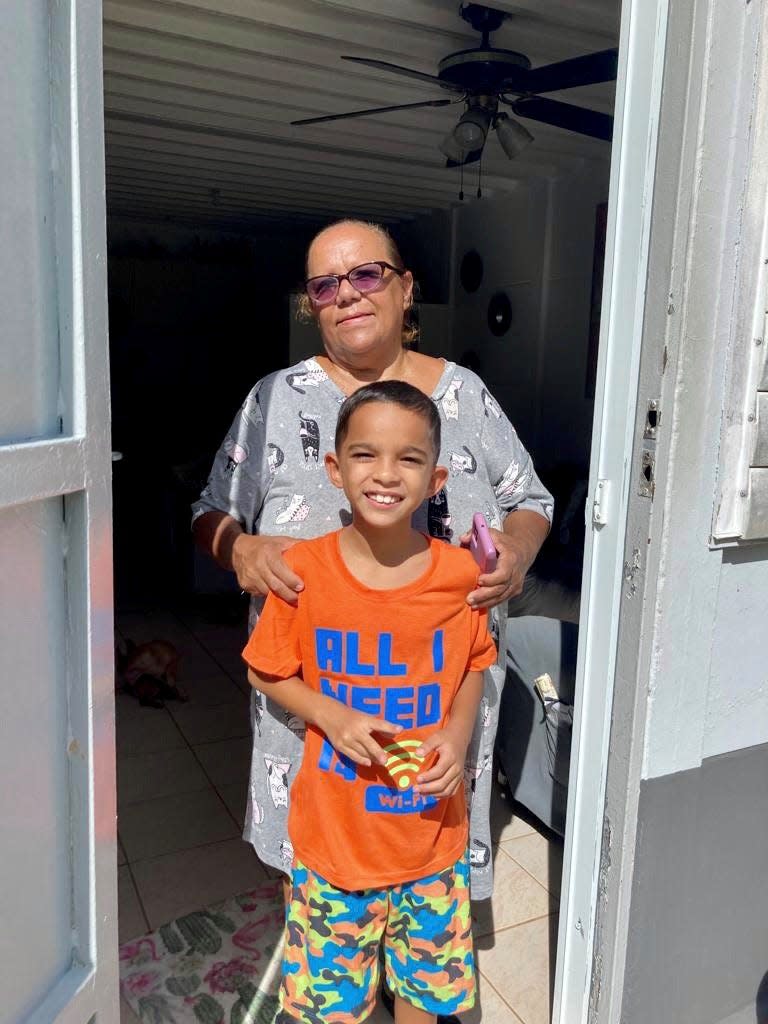 Rivera has a gasoline generator she runs for a few hours a day, mainly to cool the refrigerator. But buying gas every day is a significant expense – one of many that people face after a disaster.

Municipal officials still haven’t been able to assess the damages to the main water treatment plant in Comerío, Mayor José “Josian” Santiago told USA TODAY. They are still waiting for the floodwaters to recede enough to inspect pipes that draw water from Rio de la Plata. 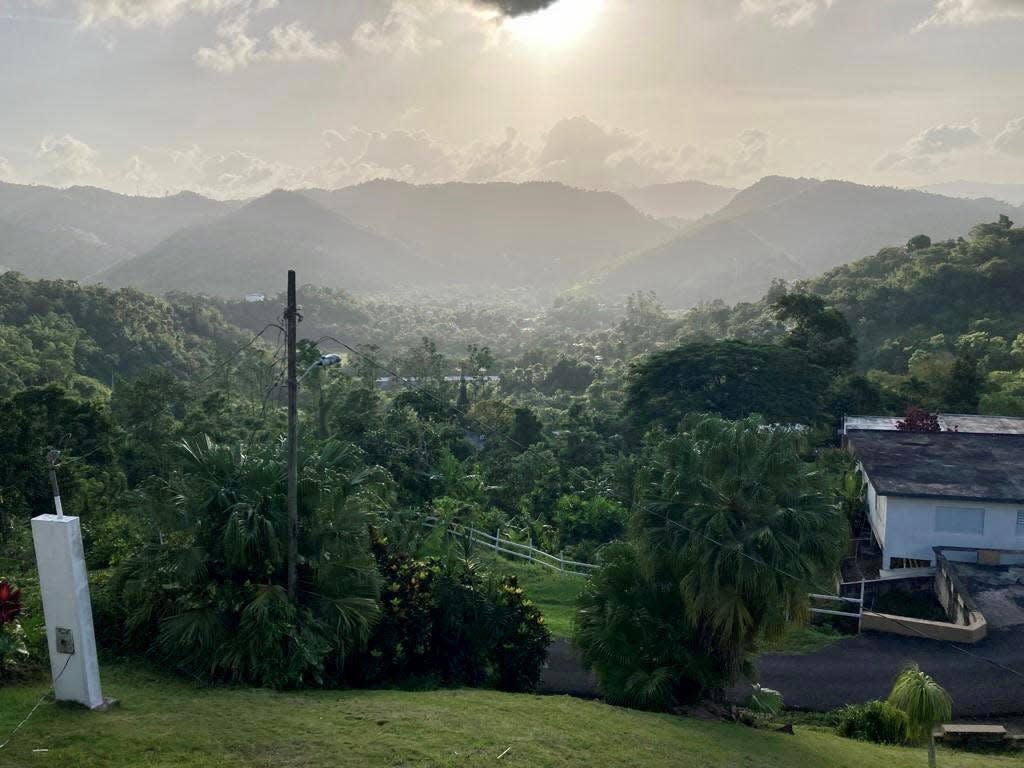 For now, tanker trucks have to make a three-hour roundtrip to a neighboring municipality, Bayamón, to fill up with water and bring it back to neighborhoods in Comerío. Each tanker truck has enough water for a few dozen homes, he said, but there are about 7,000 residences.

“We’re in the third day (after the storm), and the principal problems are lack of potable water and electricity,” Santiago said in Spanish. “After three days, people have used up the water they had stored.” 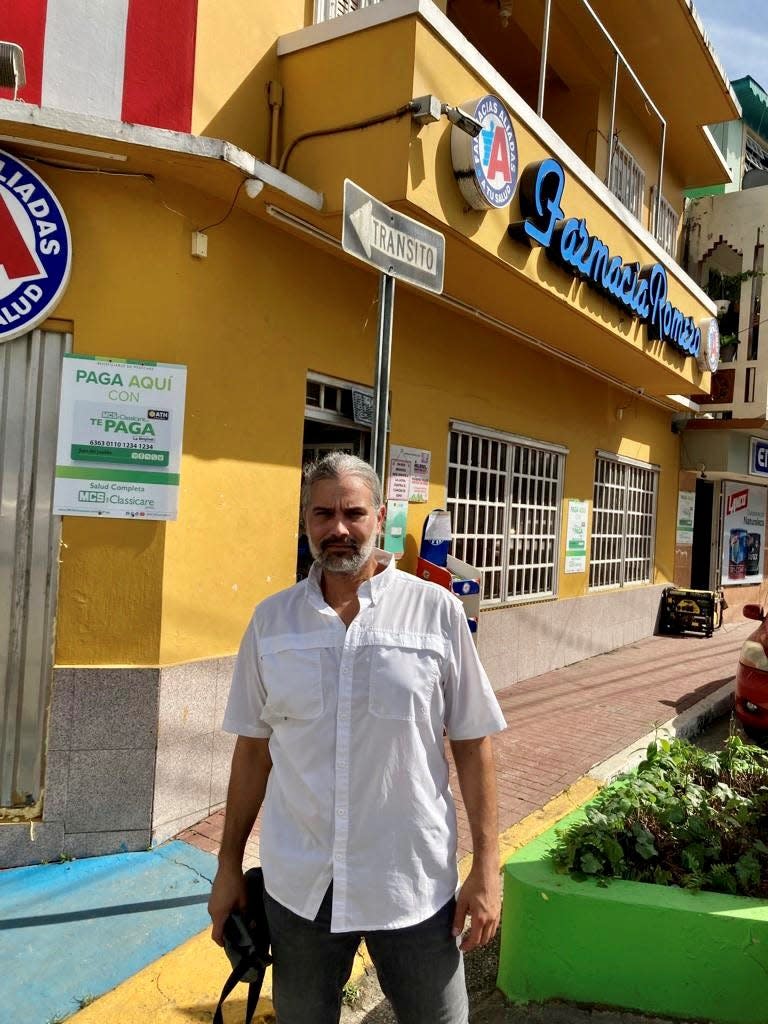 In downtown Comerío, José Iván Romero, 44, owns and operates Farmacia Romero, about half of a block from the banks of Rio de la Plata. Sunday, the river rose within feet of the front door of his business.

“Thank God it didn’t come into the pharmacy,” he said in Spanish.

Without power or running water, Romero each day takes medications that need to be kept cold to his home in San Juan. He keeps the pharmacy’s lights on with a generator. But he needs to shut it down to cool off every 90 minutes.

“If we run out of gas, we have to close,” Romero said.

Romero also has a farm in the Paloma neighborhood of Comerío. He estimated he lost around 20,000 plantain plants to wind damage during the hurricane. 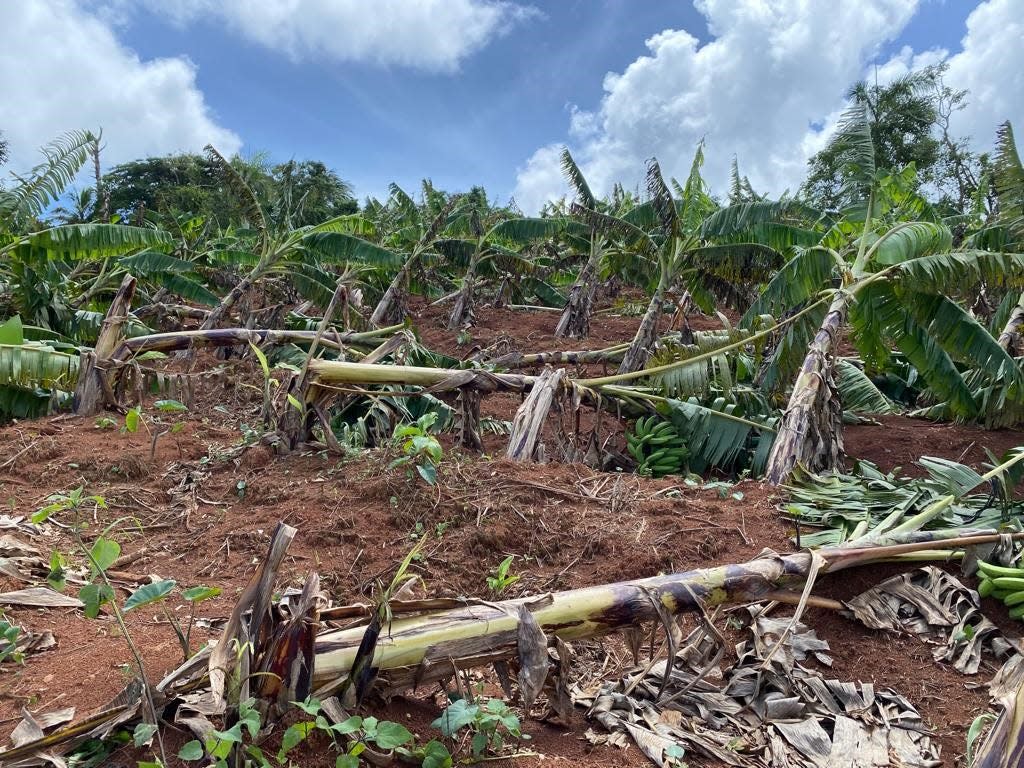 It’s the third time his farm has suffered catastrophic losses. The first was during Hurricane Maria five years ago. Then came the coronavirus pandemic and the lockdown restrictions that closed off most of the outlets for selling his produce.

Hurricane Fiona may prove the last straw for the farm.

After he inspected the damage this week, Romero said he texted his wife, “I think it’s time.”

This article originally appeared on USA TODAY: Puerto Rico is digging out after Hurricane Fiona: ‘We are not OK’