Delhi: India prohibited wheat exports that the world was counting on to alleviate supply constraints sparked by the war in Ukraine, saying that the nation’s food security is under threat.

All new shipments will be banned with immediate effect. 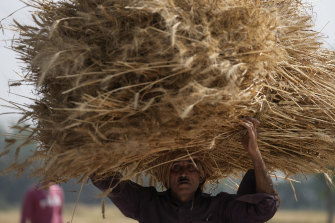 A farmer carries wheat crop after harvested on the outskirts of Jammu, India.Credit:AP

Exports will still be allowed to countries that require wheat for food security needs and based on the requests of their governments, India’s Directorate General of Foreign Trade said in a notification dated May 13.

The decision to halt wheat exports highlights India’s concerns about high inflation, adding to a spate of food protectionism since the war started.

Global buyers were banking on India for wheat supplies after exports from the Black Sea region plunged since Russia invaded Ukraine in late February.

Ukraine and Russia are among the world’s leading wheat suppliers.

Governments around the world are seeking to ensure local food supplies with agriculture prices surging.

Curbing exports would be a hit to India’s ambition to cash in on the rally in global wheat prices after the war upended trade flows out of the critical Black Sea breadbasket region.

Importing nations had looked to India for supplies, with top buyer Egypt recently approving the South Asian nation as an origin for wheat imports. 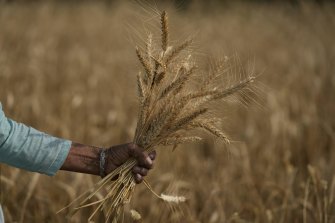 An unusually early, record-shattering heat wave in India has reduced wheat yields, adding to the pressure on food prices. Credit:AP

Bloomberg News reported earlier this month that a record-shattering heat wave has damaged wheat yields across the South Asian nation, prompting the government to consider export restrictions. The food ministry had said it didn’t see a need to control exports, even as the government cut estimates for India’s wheat production.

Shipments with irrevocable letters of credit that have already been issued will still be allowed, according to the latest notification. Traders have already contracted to export 4 million tons of wheat so far in 2022-23, the food ministry said on May 4.

After Egypt, Turkey has also given approval to import wheat from India, it said.

The government said its wheat purchases for the country’s food aid program, the world’s largest, will be less than half of last year’s level.

The ban on shipments will likely hurt farmers and traders who have stockpiled the grain in anticipation of higher prices on the domestic market.