Indian professor, 38, dies from Covid after another 3,874 fatalities

Indian professor, 38, dies from coronavirus days after using Twitter to beg for an ICU bed as death toll keeps climbing with another 3,874 fatalities

An Indian professor has died of Covid-19 soon after taking to social media to beg for an ICU bed, as the death toll has climbed with another 3,874 fatalities in 24 hours.

Nabila Sadiq, a professor at Delhi’s Jamia Millia Islamia University, died on Monday night after taking to Twitter on May 4 to beg for an ICU bed amid her Covid battle.

Meanwhile, a woman, 45, with coronavirus died on Wednesday, while her daughter claimed she was gang raped by three employees of Paras HMRI Hospital in Patna. The hospital has denied the rape allegation.

India has been fighting a serious third wave of coronavirus for the past month, and although the number of cases and deaths are starting to decline, there is speculation the death doll could be an under-representation, due to most deaths in rural areas of India going unrecorded.

Questions about the Delhi’s official Covid statistics have been raised after a private testing company found that 63 per cent of the people it tested had coronavirus antibodies, meaning they have been infected by the virus and recovered.

India reported 276,110 new coronavirus infections on Thursday over the previous 24 hours, while the daily death toll rose by another 3,874. 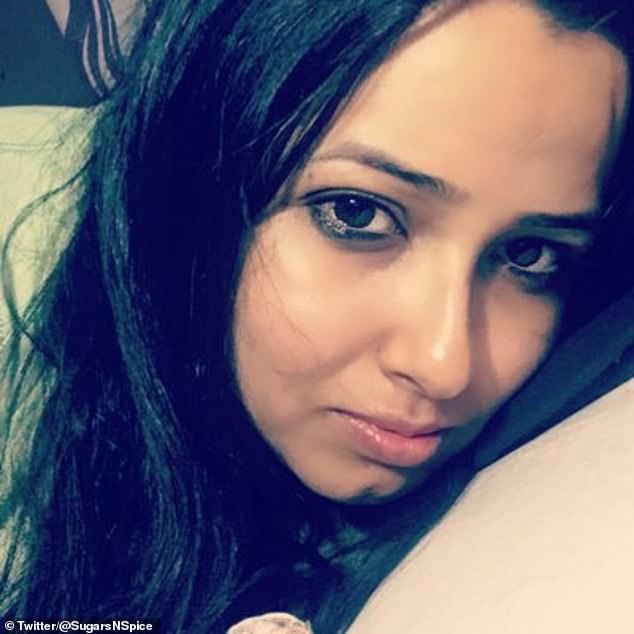 Nabila Sadiq (pictured), a professor at Delhi’s Jamia Millia Islamia University, died on Monday night after taking to Twitter on May 4 to beg for an ICU bed amid her Covid battle

University professor Nabila Sadiq died on Monday evening after recording her battle with Covid on Twitter, including putting out an SOS call for an ICU bed on May 4, according to NDTV.

Her Twitter feed tragically recorded her last few days before her death, where she asked people to ‘pray’ for herself and her parents and expressed her fear that ‘no one will stay alive in Delhi’.

In April, she shared a flood of social media posts expressing her desperation at the Covid crisis in India, writing on April 24: ‘Too young and known people dying due to lack of oxygen.

‘Every day I wake up to a death news. Too much for the mental state. When will this end.’

Nabila, 38, also documented her own battle with the deadly virus, taking to Twitter on April 26 to ‘pray’ that her health would improve after her fever had reduced.

On May 1, she penned: ‘Pray for me and parents please. We sail through.’

The next day, Nabila then tweeted: ‘At this rate no one will stay alive in Delhi at least.’

She then begged people to help her find a bed in an intensive care unit, soon after Indian hospitals were forced to turn patients away amid a spike in Covid cases. 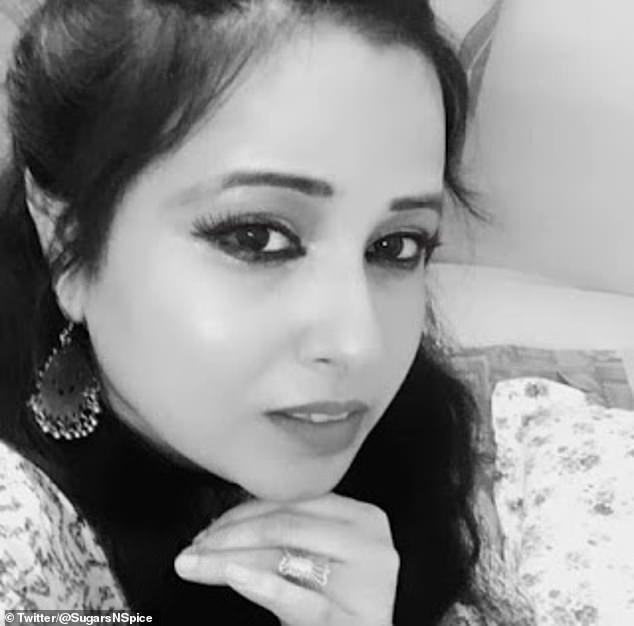 Nabila, 38, (pictured) documented her own battle with the deadly virus, taking to Twitter on April 26 to ‘pray’ that her health would improve after her fever had reduced

Despite securing herself a hospital bed, after being turned away by three hospitals, Nabila’s lungs were already too damaged and she died on Monday night

Her last tweet, posted on the same day, simply read: ‘Got it.’

Despite securing herself a hospital bed, after being turned away by three hospitals, Nabila’s lungs were already too damaged and she died on Monday night, NDTV reported.

While she was in Fortis Hospital in Faridabad, Nabila was also allegedly not told when her mother Nuzhat, who was also battling coronavirus, had died on May 7.

Her father Mohammad Sadiq, 86, said he is a ‘walking corpse’ after tragically losing both his wife and his daughter, who died within just 10 days of one another.

The former Jamia professor continued: ‘When my wife died I thought I have my daughter. Now all I have are memories.’

Her student Wagar, who was with the family throughout, said they called every hospital in Delhi NCR to get Nabila an oxygen bed before her friends helped them secure one at Fortis Hospital.

But Nabila’s oxygen levels had reportedly already dropped to 32 per cent by the time they got her a hospital bed, and she was put on a ventilator on Saturday before she tragically died on Monday.

Wagar added: ‘It feels like we lost our mother. She helped so many people during the pandemic.’

Meanwhile, a Covid-infected woman, 45, died on Wednesday, while her daughter alleged that she was gang raped by three employees at a private Patna hospital.

The deceased woman’s daughter has claimed that her mother was admitted to Paras HMRI Hospital in Patna on May 15 with symptoms of coronavirus, National Herald India reported.

She claimed that her mother was sexually assaulted by three members of staff in the hospital’s ICU on May 16. The hospital denied the rape allegation in a written statement on Wednesday.

The daughter said: ‘My mother was sexually assaulted by three persons inside the hospital ICU on May 16.

She added that hospital administration put her mother on a ventilator because it would be ‘life-threatening’ not to after her health had deteriorated. 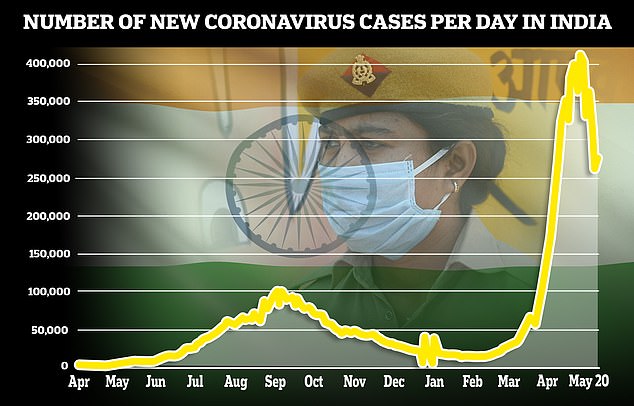 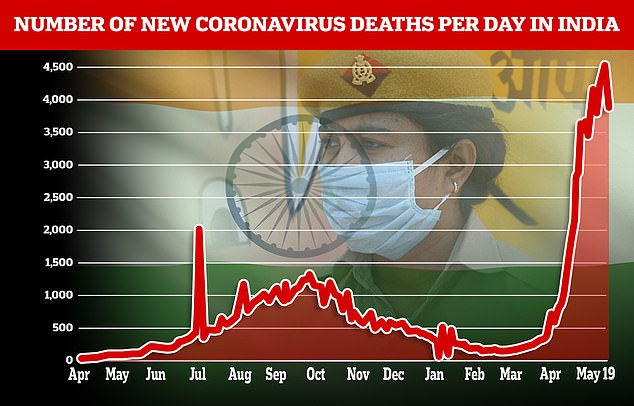 India reported 276,110 new coronavirus infections on Thursday over the previous 24 hours, while the daily death toll rose by another 3,874

The daughter continued: ‘I suspect that the doctors in the hospital intubated her in the neck, so that she couldn’t give her statement to the police. Now they have declared her dead.’

M.L. Khan, the Duty Magistrate of Patna, said: ‘We have received a complaint from the deceased’s person’s daughter against the hospital administration. The names of the accused are not mentioned in her complaint.

‘We have sent the body for post-mortem to ascertain if there was sexual assault. The hospital administration has cited corona infection as the cause of her death. Further investigation is on.’

The hospital management team also released a written statement on Wednesday, which denied the rape charge and claimed ‘such an incident did not happen’ in the hospital, the National Herald India reported.

The statement read: ‘The patient was admitted to the Covid ICU of our hospital on May 15, with symptoms of Covid. On May 16 evening, the patient had become restless and was not maintaining proper saturation on high flow oxygen.

‘The patient after being put on ventilation did not show signs of recovery and her vitals and other parameters kept deteriorating. The poor prognosis of the patient was explained to the next of kin on several occasions. Unfortunately, the patient lost her battle with Covid on the morning of May 19.’

It added: ‘The patient’s daughter has alleged that the patient had been molested by three personnel, whom she was unable to identify between 6 pm of May 16 and 11 am of May 17. This matter was taken up by the hospital management and an internal enquiry was done based on the same.

‘After the investigation, the hospital management had shared its conclusion with the appropriate authorities that such an incident did not happen in the premises of the hospital.’

It concluded: ‘We are committed to providing the best care to our patients and we will support and extend our cooperation in all investigations and related matters of this case.’

Elsewhere, it was reported on Wednesday that hundreds of decomposing bodies of coronavirus victims were continuing to wash up in the Ganges across India.

Local residents from towns on the banks of the 1,560-mile long river said dozens of new corpses appear everyday, and claimed the events expose India’s official death toll of 287,122 as a sham.

Questions about the Delhi’s official Covid statistics have also been raised after a private testing company found that 63% of the people it tested had coronavirus antibodies, meaning they have been infected by the virus and recovered.

Locals in Uttar Pradesh say they are being forced to wade through corpses while bathing in the river as feral dogs and birds feast on the bodies. The grim scenes on the Ganges started last week when 71 bodies washed up on the bank in Chausa village.

The following day, in Gahmar, six miles away, dozens more decomposing corpses were spotted by villagers, while in the neighbouring Ballia district, bathers found 62 rotting bodies floating in the river.

All along the Ganges, in villages including Kanpur, Kannauj, Unnao and Prayagraj, shallow graves and human mounds line the embankment, while in Mahadevi ghat, more than 50 bodies were found. 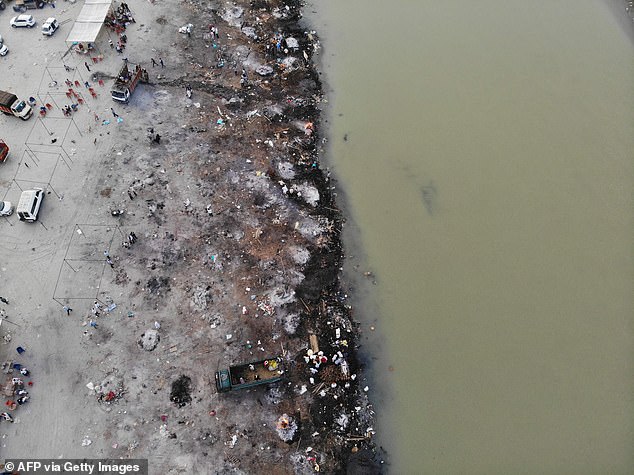 It was reported on Wednesday that hundreds of decomposing bodies of Covid victims were  washing up in the Ganges. Pictured: Funeral pyres are seen in a cremation ground in Garhmukteshwar 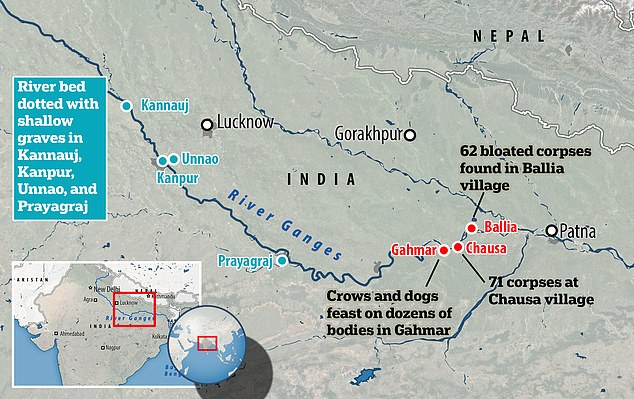 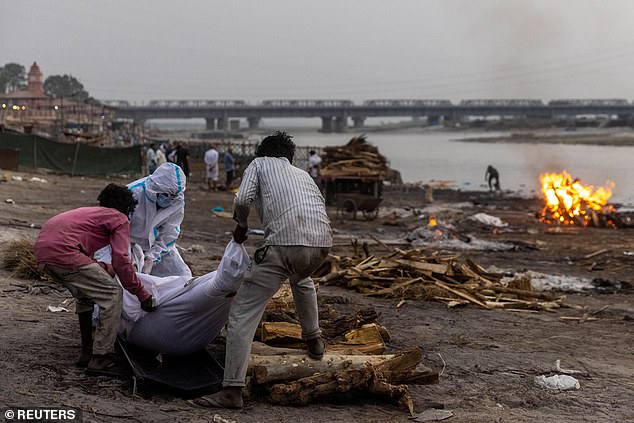 Locals in Uttar Pradesh say they are being forced to wade through corpses as dogs and birds feast on the bodies. Pictured: Covid victim is burned on a funeral pyre on banks of the Ganges

A journalist in Kanpur told the BBC that poorer people cannot afford cremations, so wrap bodies in muslin and push them into the river.

This practice happens in non-pandemic times but villagers have never seen so many bodies wash up in such a short space of time.

In Kanpur, officially 196 people died from Covid between April 16 and May 5, but the data shows around 8,000 cremations took place, which were often held by family members rather than official crematoriums.

Crematoriums only accepted bodies that had come from a hospital with a Covid certificate but many people were dying at home having not received a test.

A source said: ‘Their families took the bodies to the outskirts of the city or to neighbouring districts like Unnao. When they couldn’t find wood or a cremation spot, they just buried them on the river bed.’

There are fears that the new, highly infectious variant is out of control and that many cases are going unreported because of lack of testing, particularly in the vast countryside.

Data from Thyrocare, a chain of private laboratories, appeared to back up those fears, showing that 63.5 per cent of people tested positive for Covid-19 antibodies on average over the last seven days, up from 45 per cent a month ago.

The data from 25 states included individuals who were infected in the past, vaccinated, uninfected and those who had not been vaccinated, the company’s Chief Executive Arokiaswamy Velumani said on Twitter.

But that still falls short of India’s claimed daily testing capacity of 3.3million, said Rijo M John, a professor at the Rajagiri College of Social Sciences in the southern city of Kochi.

India performed 224 tests for every 1,000 of its population in a single day this month, according to estimates by research firm GlobalData. This compared with 1,307 tests per 1,000 of population in the United States on the same day, the firm said.