Singapore: Indonesian authorities have defended the use of a locally developed COVID-19 breathalyser at airports and train stations despite fresh questions about its accuracy.

In Australia, “blowing into the bag” is simply slang for a roadside breath test, with more modern devices now being used to catch drink drivers.

A woman blows air in a plastic bag to be tested for COVID-19 at Bali airport.Credit:Getty

But in Indonesia, plastic tubes are used to diagnose another danger – the coronavirus – with commuters providing breath samples that can return a result in three minutes.

Produced by researchers at Gadjah Mada University in Yogyakarta, the GeNose C-19 pre-boarding test has been on offer at major provincial airports in Palembang, Bandung, Surabaya, Yogyakarta and in Bali this month after being used at 44 train stations since February.

In a country of 270 million people with the highest number of infections in south-east Asia but one of the world’s lowest testing rates, the introduction of a cheaper, faster and less invasive mechanism is seen by the government as another weapon in the battle to fight off the virus, with developers harbouring ambitions to test 1.2 million people a day.

Sold for 30,000 rupiah ($2.65) per test, the GeNose has already been used by thousands of domestic travellers told to choose between it, a polymerase chain reaction (PCR) swab test or a rapid antigen analysis, both which involve nasal swabs.

Those who test positive on the breathalyser are made to take a proper diagnostic test and quarantine for 10 days at home or in a state-run isolation unit if they’re confirmed to have COVID.

Other COVID-19 breathalysers have been researched and tested in countries such as the netherlands, the United States and Singapore but Indonesia, whose problems have been compounded by delays in vaccine supply, got ahead of the pack, granting developers a marketing licence last December.

It works by artificial intelligence sensors analysing a person’s breath.

Test results for GeNose can be delivered in three minutes.Credit:Getty

However, the introduction of GeNose in Indonesia has not been without critics.

Pandu Riono, an epidemiologist at the University of Indonesia, disputes the claim by the developers that the breathalyser can detect COVID-19 only two days after viral exposure while the other tests can’t pick it up until four days after infection.

He queries its accuracy and said it was “dangerous” for it to be rushed out despite Indonesia’s desperation to contain a virus that has infected nearly 1.6 million people and claimed more than 43,000 lives.

“It is impossible [to detect the virus two days after transmission],” Riono said. “What is problematic is that the claim has never been validated. And what makes me even more confused is that the COVID-19 Task Force allowed it.”

The expansion of the rapid breath test for the virus comes as Indonesia bans internal travel for Eid al-Fitr next month when millions in the world’s most populous Muslim majority nation would usually return home to mark the end of Ramadan.

Indonesian Health Ministry spokeswoman Widyawati said the breath test was approved but “only for screening purposes”.

“In accordance to the WHO [World Health Organisation], only PCR tests and rapid antigen tests can be used for diagnosis,” Widyawati said.

The GeNose tests have been carried out on about 700,000 people in the past two months, according to Indonesian Transportation Ministry spokeswoman Adita Irawati.

She said some results may have been affected by people not fasting for 30 minutes before the test, as they are instructed to do. 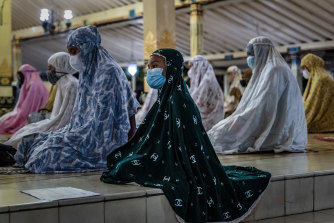 “If there is any information from the ground that it is not accurate, well, I think there is no test method that provides a 100 per cent effectiveness,” Irawati said.

The developers reported the test had an accuracy of 93 to 94 per cent following a clinical trial involving 1999 people in Yogyakarta last year.

Dian Kesumapramudy, one of the two researchers who devised the COVID-19 breathalyser in Indonesia, is taken aback by questions about GeNose’s effectiveness and the process by which it was released.

“I am confused why some people say that our research was not open. I have given speeches everywhere including in front of PDUI [the Association of Indonesian General Practitioners],” he said.

“Since December I have spoken about our research everywhere. In normal times, the procedures are to publicise your research first [in scientific journals] and after obtaining a patent you can start production. But we are not in a normal condition.

Associate Professor Paul Griffin, an infectious diseases expert at the University of Queensland, said speed usually came at the expense of accuracy when it came to such testing.

“There is experience in this sort of testing,” he said. “I’ve certainly been involved in some breath testing for malaria for example and that seemed to actually perform reasonably well. But what is clear is that whenever we use quicker and less invasive testing, is it nearly always comes at the cost of testing performance,” Griffin said.

“Having said that, it doesn’t mean it doesn’t have a use, provided we interpret the results in the appropriate context. If it’s a rapid screening test, for example, to augment the typical laboratory protocol, then I think it may well have a lot of use.”

blow, in, Indonesia, out, rolls, t
You may also like: