IRAN'S warped terrorist army the Revolutionary Guard are hellbent on vengeance over the killing of Qasem Soleimani – and it has been warned the group has "British blood on its hands".

The shadowy force are brainwashed into having a deep and violent hatred of the West, Christians and Jews, researchers told The Sun Online. 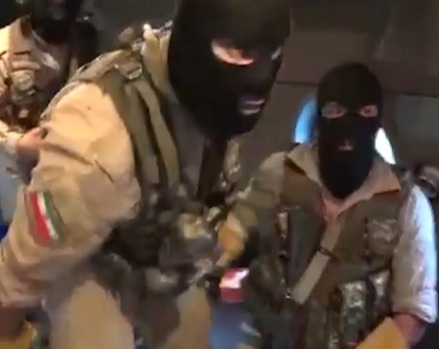 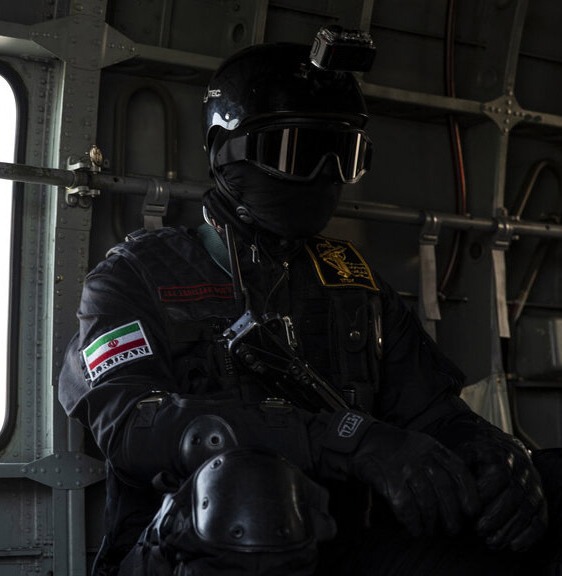 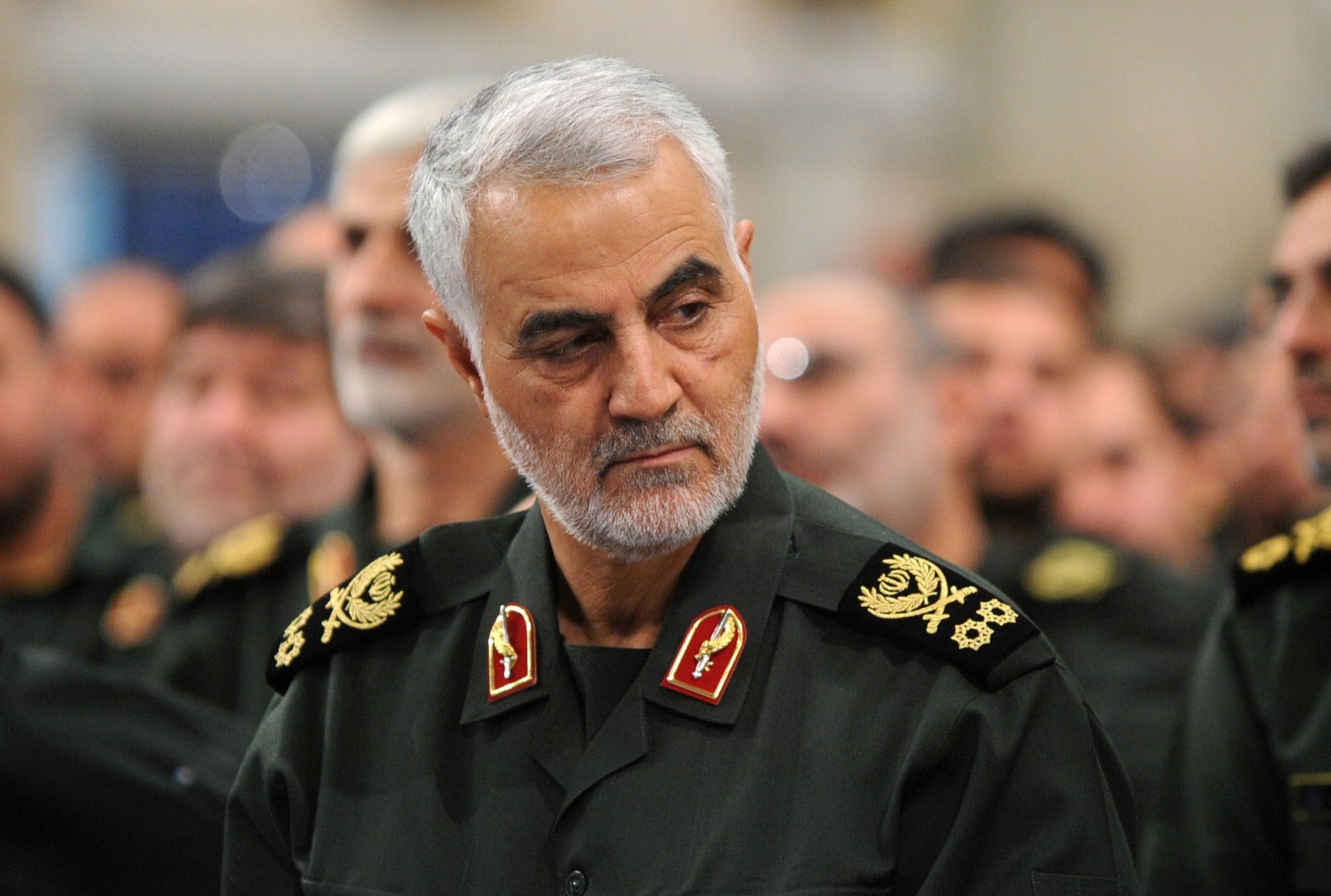 The brainwashed army are said to be growing in power within Iran as it is committed spreading jihad across the world while Iran mourns on the first anniversary of the death of Soleimani.

Iran has been threatening revenge over his assassination, after the US blew him up in a drone strike in Iraq, and even accused a British company of playing a role in his death.

And now The Sun Online can lay out the twisted world inside this mysterious force that has been behind attacks across the Middle East.

“It’s certainly the case they have British blood on their hands,” Iran expert Kasra Aarabi told The Sun Online.

British soldier Lance Corporal Brodie Gillon, 26, died when at least 15 missiles were fired at a camp north of Baghdad in an attack blamed on a group backed by the IRGC

And they have been accused of the deaths of 150 British troops in Iraq, while last year they seized a UK-flagged tanker in the Persian Gulf.

He said the materials more akin to what you would expect for al-Qaeda and ISIS.

“The worldview within this training is extremist and violent

Vile training manuals talk explicitly about execution and amputation of limbs as justified punishments for their enemies.

Recruits are referred to as “mujahideen” – the Islamic term for warriors of God – rather than as soldiers.

And the training materials label any Muslims who do not engage in jihad as deserving "agony in hell".

The revelations come as the House of Commons Foreign Affairs Select Committee has called on the UK Government to officially designate it a terrorist organisation – as the United States did in 2019. 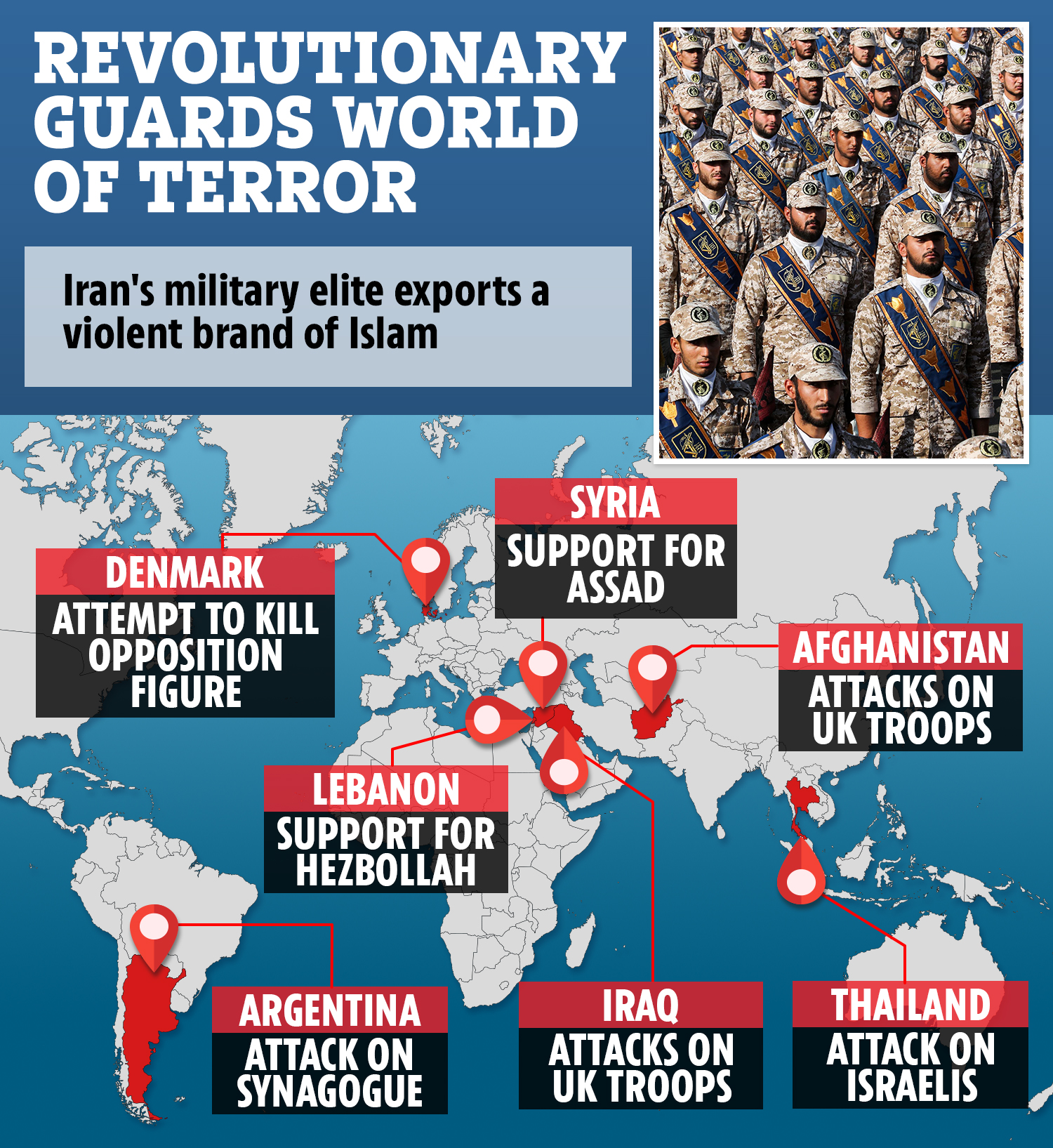 WHO WAS QASEM SOLEIMANI? 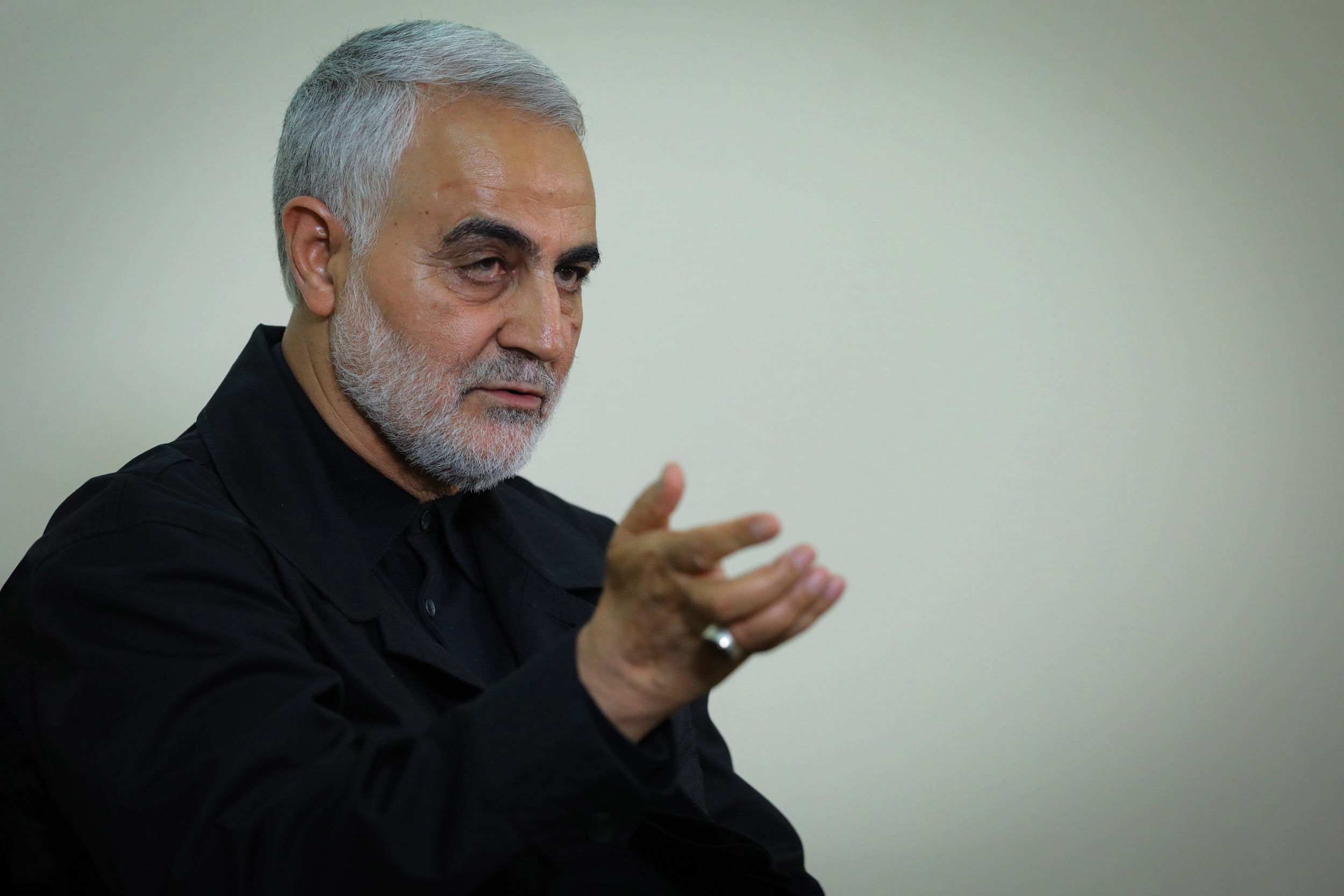 ONE year ago Iranian major general Qasem Soleimani was blown up in an airstrike by the US.

Soleimani, 62, spearheaded Iran's military operations in the Middle East as head of the country's elite Quds Force – a wing of the IRGC.

He was considered to be one of the most powerful figures in the country, masterminding Iranian intelligence and military operations abroad.

Outside of war-games he was considered to be even more pivotal, with commentators comparing his role to that of US Vice President, Mike Pence.

He is thought to have directly reported to Ali Khamenei, Iran's Supreme Leader.

He was killed at Baghdad airport by a US air strike, personally approved by Donald Trump on January 3, 2020.

Two missiles fired from a MQ9 Reaper drone struck Soleimani after he disembarked from an aircraft at Baghdad airport.

The Pentagon justified the assassination, saying General Soleimani was "actively developing plans to attack American diplomats and service members in Iraq and throughout the region".

His death put both Iran and the US at each others throat, tensions which persist and have begun to inflame again around the anniversary.

Soleimani's replacement Esmail Qaani has openly called for "revenge", and judiciary chief Ebrahim Raisi has said even Trump is not "immune from justice".

Mr Aarabi – who has researched the IRGC extensively and gave evidence to the committee – welcomed the call for it to be labelled a terrorist group.

The IRGC was formed as an “ideological army” to defend the Iran’s Islamic Revolution that overthrew the pro-Western Shah in 1979.

Mr Aarabi, from the Tony Blair Institute for Global Change, looked at the propaganda material produced to train recruits in its original Farsi to produce a rare and chilling insight into how they are indoctrinated.

When it comes to defining the enemies of Islam, the IRGC are “explicit” about who they are opposed to.

The most vehement hatred appears to be reserved for mohareb – or one who wages war on God. 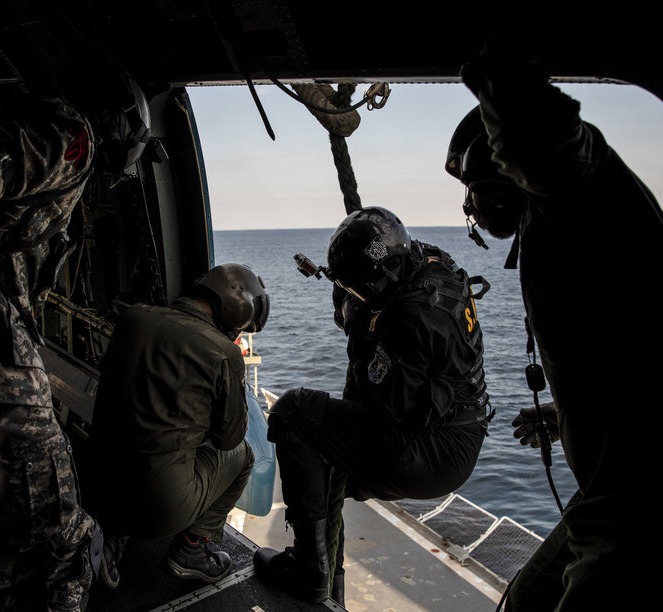 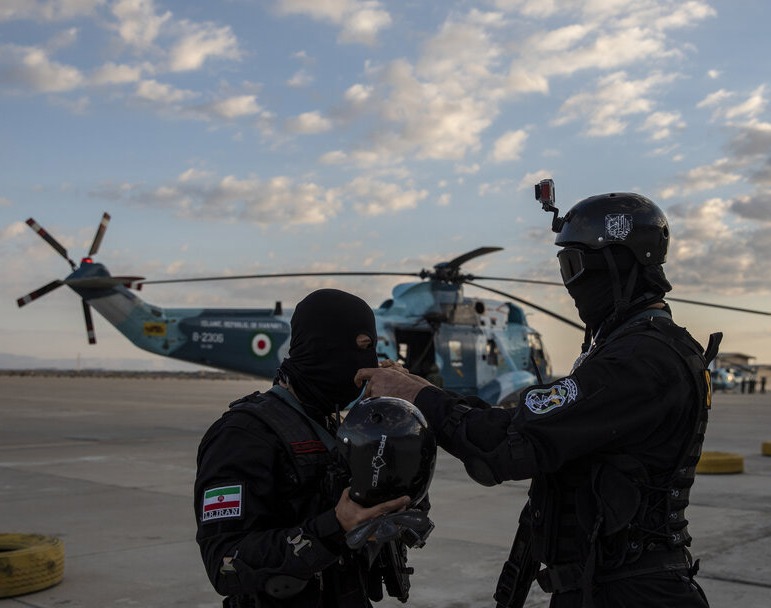 IRGC textbooks outlines four specific punishments for the mohareb which are execution, hanging, and cross-amputation – cutting off a hand and the opposite foot – and exile, says his report.

Aarabi found that “the worldview within this training is extremist and violent” and advocates “jihad in the name of exporting Iran’s Islamic Revolution”.

At the core of the IRGC is a fanatical ideology and a distorted version of Islam that is hammered into all its recruits.

Its enemies are the West, Christians and Jews as well as Iranians who oppose the regime and textbooks claims there is an “Arab-Zionist-Western axis” conspiracy against Iran.

In that respect it shares the same enemies as other jihadi fanatics, ISIS and al-Qaeda, despite them being from the rival Sunni branch of Islam, says Aarabi. 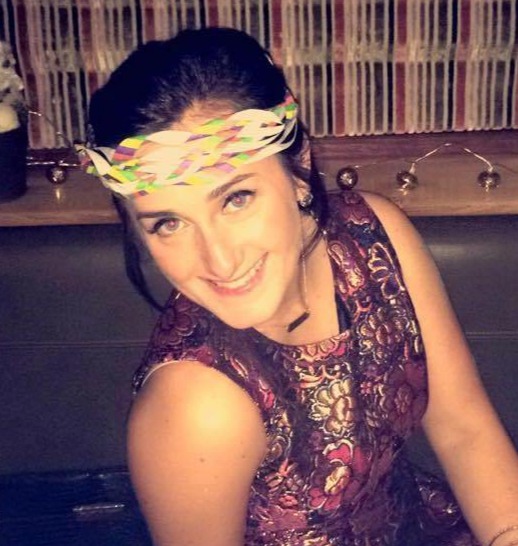 Simon Waldman, a fellow with Henry Jackson Society think-tank, told The Sun Online the IRGC “is completely alien to most people in the UK” as it’s a terrorist organisation that is part of the armed forces.

“The reason it’s taken so long to designate the IRCG a terrorist organisation is that it’s actually part of Iran’s armed forces,”said Dr Waldman, who also gave evidence to MPs.

“It’s not common to designate a country’s military a terrorist organisation.

“Imagine in the UK there is the armed forces as we have it but then we say we also need to protect the nature of what it means to be British so we create another armed forces.

“We then find British people across the world and arm them into militias and they commit acts of terrorism."

The IRGC are believed to have been behind terrorist attacks across the globe, from Argentina to Thailand.

It is is currently led by Hossein Salami and is estimated to have more than 190,000 active personnel. 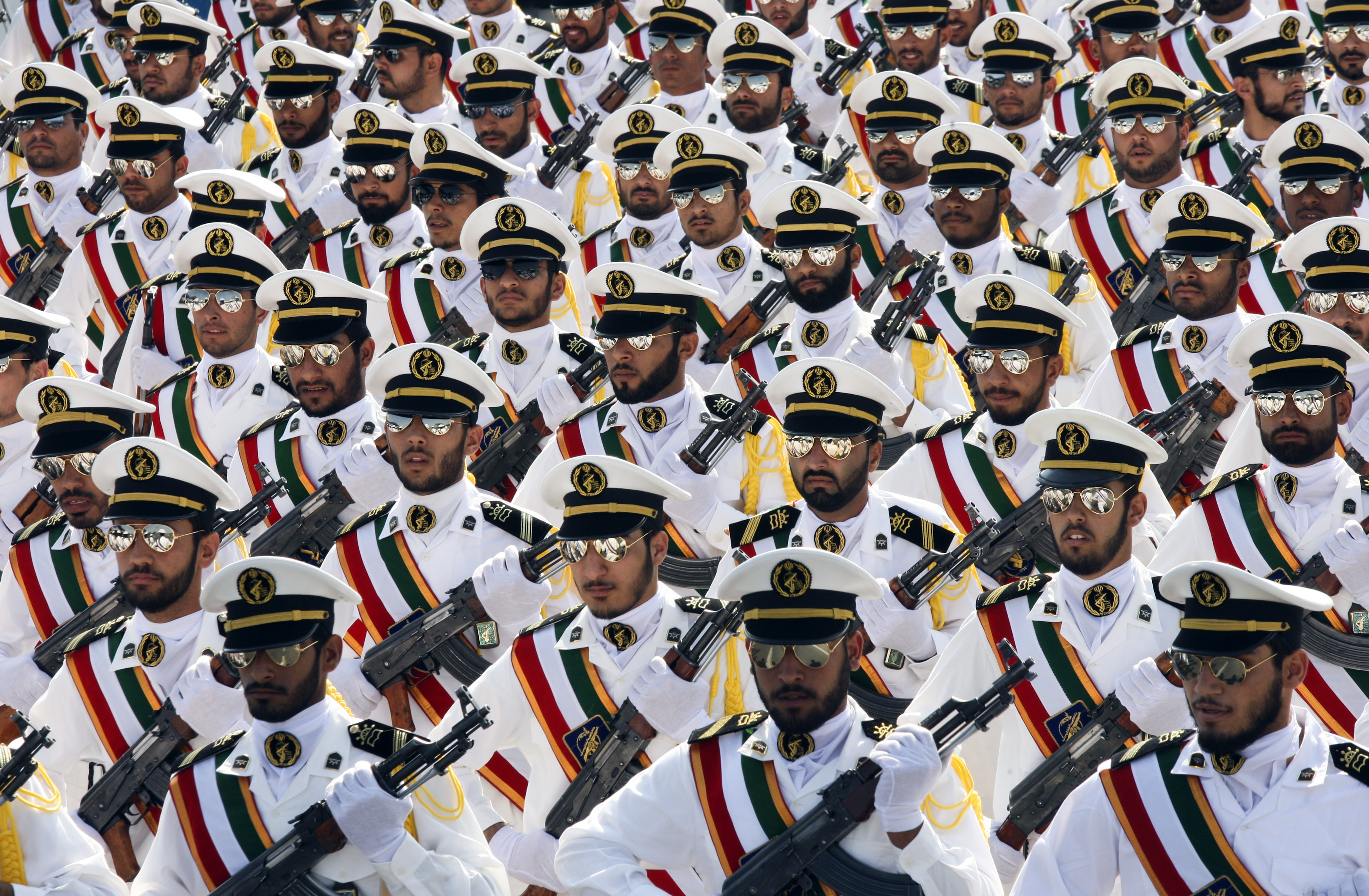 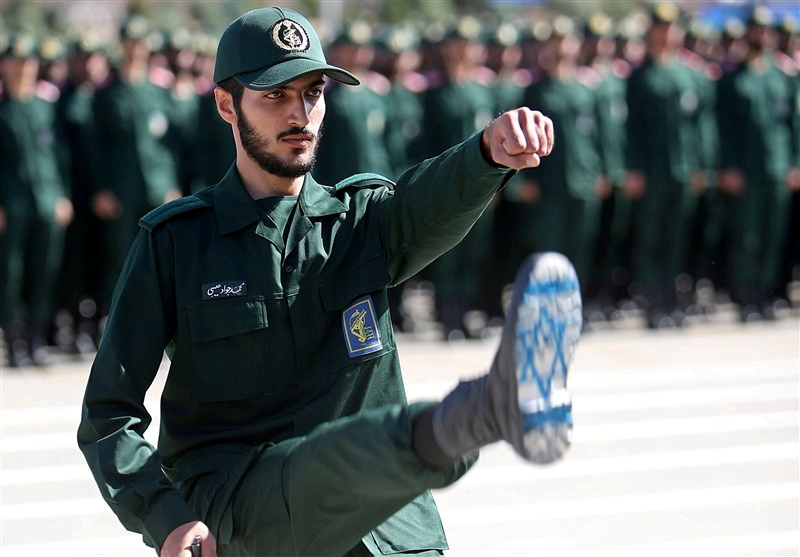 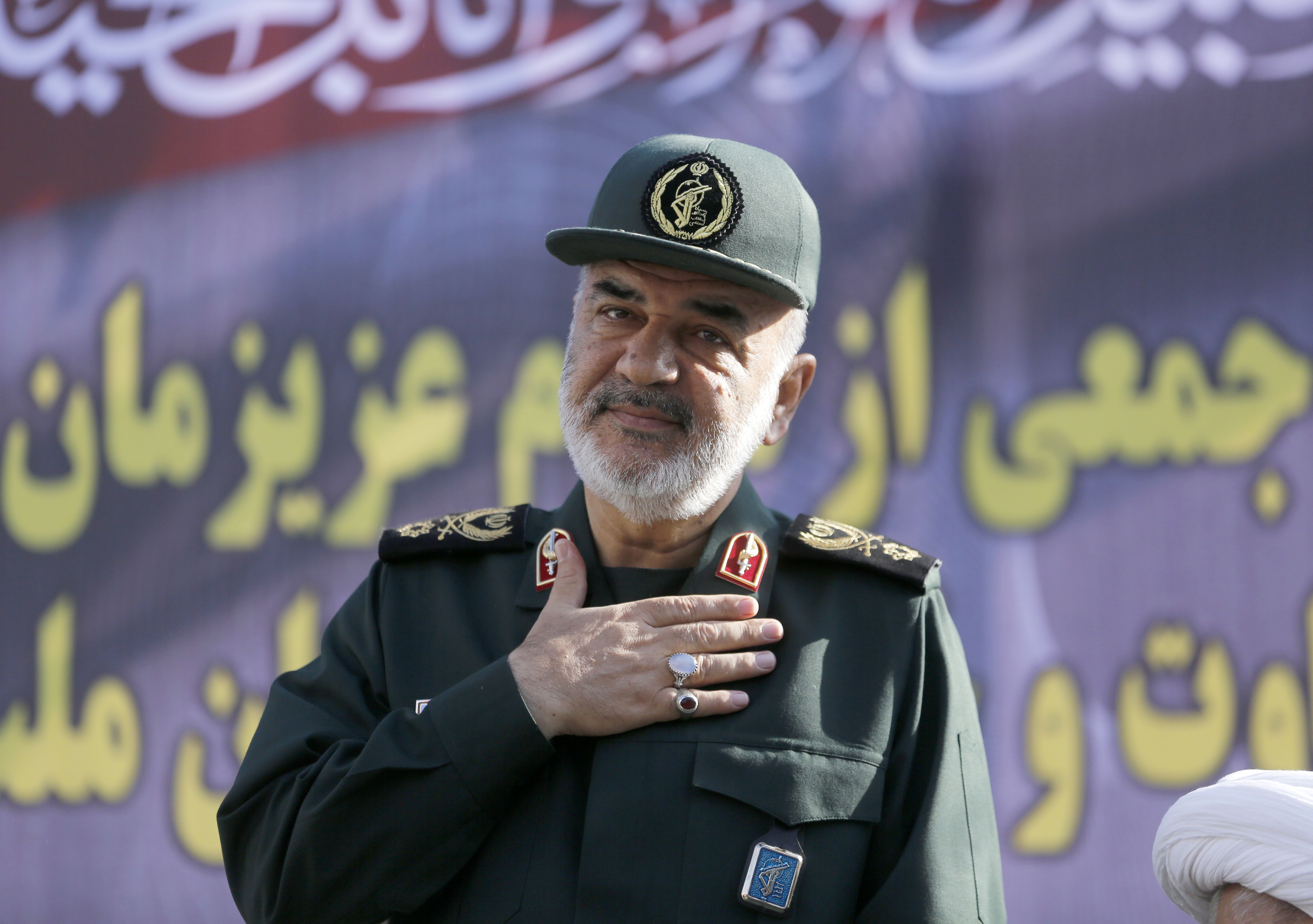 It boasts its own ground forces, navy and air force, and oversees Iran's strategic weapons.

Within it lies the Quds Force – literally the Jerusalem force – which is responsible for overseas operations and surveillance.

It has provided funding, training, weapons and equipment to terrorist groups in the Middle East, including Hezbollah movement and the Palestinian Islamic Jihad group based in Gaza.

Quds Force’s former commander General Soleimani was considered to have masterminded a new type of roadside bomb that was deployed in Iraq from 2004 onwards, killing many UK and US troops.

Former CIA officer John Maguire said that Soleimani was "the single most powerful operative in the Middle East".

He was finally killed in a US drone strike in Iraq amid claims from the Trump administration that he was planning attacks on US diplomats.

The Quds Force has also been linked to attacks on Iranian exiles and is widely believe to behind the luring of dissident Rouhollah Zam back to Iran, where he was hanged.

The Foreign Affairs select committee found the actions of the IRGC meet the criteria for proscription in the Terrorism Act 2000.