London/Yangon/Kashmir: Late on a December evening Masrat Jan, a 40-year-old mother of four from the village of Sangria Barzol in Indian-administered Kashmir, developed sudden chest pain.

Her family took her to the nearest hospital. But because it had no cardiac specialists, she was referred to another facility more than another hour’s drive away. She died there five minutes after arrival – a collateral victim, doctors explained, of a draconian security environment. 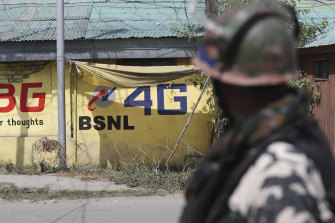 “The doctors told us if there was an internet, they could have contacted the cardiologists in Srinagar and stabilised her,” her father, Gul Mohammad Shah, said. “She would have survived had there been an internet service available.”

India’s government shut down internet, mobile phone and landline services in Kashmir before stripping the region of its partial autonomy on August 5, 2019, saying it wanted to stave off civilian protests.

The Kashmir blackout, which finally ended earlier this month, stood out because of its record length and because it was imposed by a democratic government. But it is far from unique.

At any time over the past year or so, at least one part of the planet has been subject to an internet blackout by its own government, often at a shocking cost in freedom, prosperity and lives. 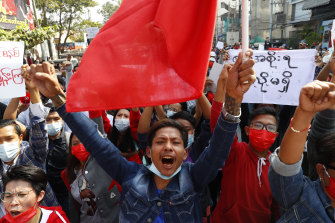 Protesters march in Mandalay, Myanmar earlier this month in the face of an internet blackout. Credit:AP

In July 2020, Ethiopia, east Africa’s biggest economy and most important transport hub, imposed a blackout for nearly three weeks on the pretext of trying to suppress hate speech.

From August 9 to 12, authorities in Belarus cut the country off from the World Wide Web while police conducted a violent crackdown on protesters angered by President Alexander Lukashenko’s apparently fraudulent election “victory”.

Authorities in Uganda pulled a similar trick in January amid a sustained crackdown on opponents of President Yoweri Museveni during presidential elections.

And on February 1, military authorities in Myanmar imposed their own blanket internet blackout as cover for their coup against Aung San Suu Kyi – ironically as they lifted a more local 18-month shutdown in the conflict-torn Rakhine and Chin states.

They cut the country off again the following weekend, and for the past two weeks have been imposing a nightly blackout from 1am to 9am.

The alarming truth, said Alp Toker, a British artificial intelligence technologist who five years ago set up NetBlocks, an observatory that monitors the phenomena, is that “internet shutdowns have always been there, but the world has not always been good at tracking them”.

He added: “It turns out they are more prevalent than previously thought and they come in a variety of forms from regional shutdowns to nation scale shutdowns.

“The most damaging ones are the near-total information vacuum in which misinformation can spread and information is dominated by government.”

For authoritarian governments, the appeal of shutting down communications is obvious.

It disrupts opposition groups trying to organise on social media or messaging apps, gives the government a monopoly on information, and makes it extremely difficult for international media and foreign governments to uncover atrocities.

Above all, it induces fear.

“We notice a pattern,” Nwe Oo, a woman who has been active in the protests in Yangon since the February 1 coup in Myanmar, said. “When the internet is cut at night, the regime starts to arrest civil society activists and public servants who are part of the civil disobedience movement.

“The blackout is affecting almost all the things we do in our protests and communications,” she added. “It is scary and dangerous because everyone is in the dark and we don’t know if there’s police violence happening nearby.”

Firstly, there is a practical challenge: it turns out that unless your national internet infrastructure, like China’s, was constructed from the ground up to allow censorship, it is extremely difficult to make a blackout watertight.

In Myanmar, some protesters have worked out how to use VPNs and smuggled Thai SIM cards to help circumvent the blocking of Facebook and other social media platforms as well as the blackouts.

In Belarus, journalists and protesters found that small service providers were able to continue providing enough bandwidth to send emails during the three-day August shutdown. Certain powerful VPNs were also found to circumvent the weekly shutdowns to coincide with Sunday rallies that followed.