An Irish football supporter has found fans in both Gary Lineker and Emmanuel Macron for hilariously interrupting a French TV interview at the World Cup in Qatar.

In the three-second clip following Saturday’s France Vs Denmark match, Eddie O’Keefe approaches the camera as a France supporter is being interviewed by a reporter in the fan zone.

Looking directly into the camera as he slides into view from the side, Mr O’Keefe says ‘Je suis une baguette’, translating to ‘I’m a baguette’, as the French fan turns to him and smiles in pleasant shock.

As Mr O’Keefe retreats following his one-liner, the French fan calls him ‘a drunk Irishman’ to the reporter, as can be seen 30 seconds in on the clip below. 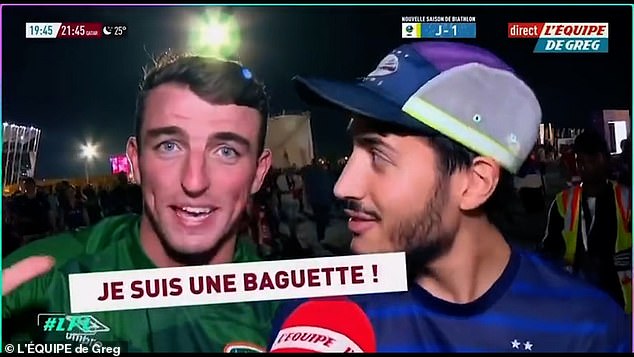 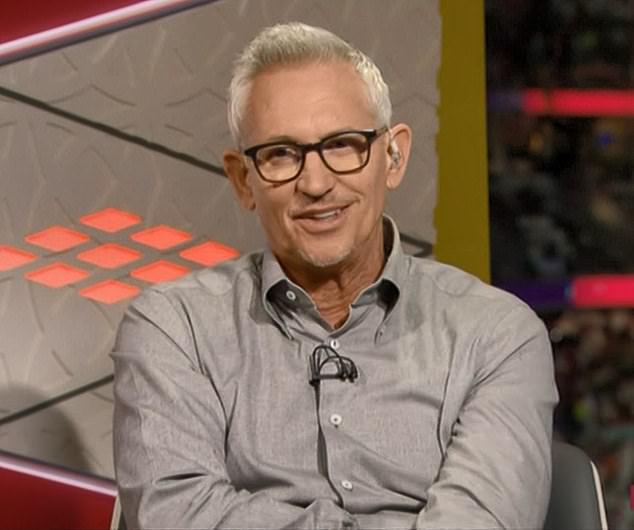 Gary Lineker, who is presenting coverage of the World Cup 2022 in this image, seems to be a fan of Mr O’Keefe’s baguette-themed interruption after sharing the clip on Twitter

The clip, which has since gone viral with 4.2 million views after a shorter version of the original from L’ÉQUIPE de Greg was posted on Tuesday by French comedian Pierre-Antoine Damecour, has found some unlikely fans.

And the hilarious interruption has even reached the upper echelons of French government, with French President Emmanuel Macron himself liking the tweet.

‘I don’t know where it came from. “Je suis une baguette” came out of my mouth and I just ran off,’ Mr O’Keefe told Cork’s 96Fm radio station, the Irish Independent reported.

‘We’re always up for mischief, Irish people, like. Always just up for the craic, up for mischief and sure, we were just laughing away. We had a few drinks in us as well.’

The Limerick native’s mother wasn’t as impressed as President Macron, however, with Mr O’Keefe telling 96Fm that she asked her son: ‘What are you doing, you fecking eejit?’

This is the latest spotlight to be shone on the humble baguette this week, with the iconic French baked good hitting headlines yesterday after it was awarded UNESCO heritage status.

UNESCO voted to include the ‘artisanal know-how and culture of baguette bread’ on its list of Intangible Cultural Heritage, which already includes around 600 traditions from over 130 countries. 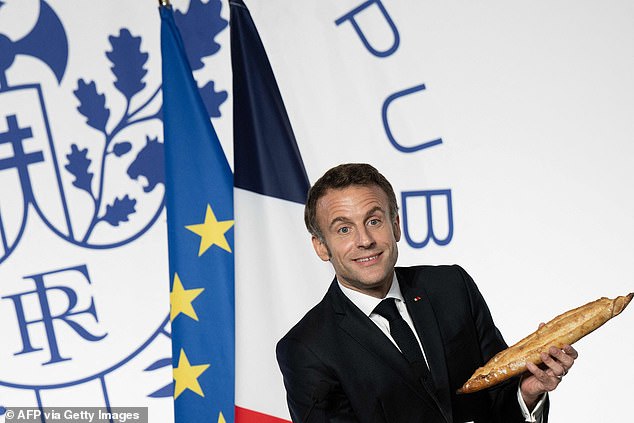 French President Emmanuel Macron holds a baguette during a reception honoring the French community in the US, at the French Embassy in Washington, DC, on November 30, 2022

It does not afford any special protections to baguettes but is added to the list to ‘help demonstrate the diversity of this heritage and raise awareness about its importance’.

France decided to submit the baguette to the panel after seeing pizza from Naples be granted the special status, with Macron declaring: ‘The baguette is the envy of the whole world.’

He added: ‘Excellence and expertise must be preserved, and that is why it should be heritage-listed.’

UNESCO chief Audrey Azoulay said it ‘celebrates the French way of life: the baguette is a daily ritual, a structuring element of the meal, synonymous with sharing and conviviality.