Tehran and Moscow have denied Western accusations that Russia is using Iranian drones to attack targets in Ukraine, where officials warned of a winter-long power deficit after repeated Russian attacks on its energy infrastructure. 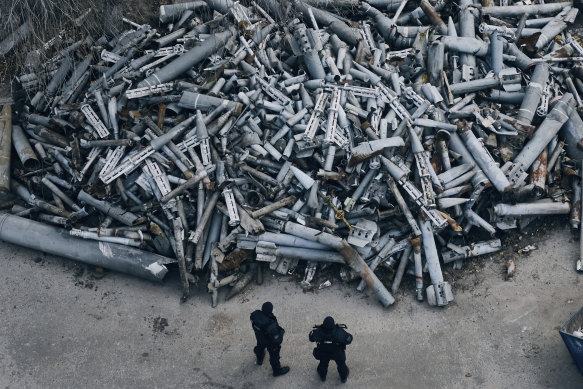 The additional US aid announcement came as NATO secretary general Jens Stoltenberg expressed worry that the fighting in Ukraine could spin out of control and become a war between Russia and NATO.

“It is a terrible war in Ukraine. It is also a war that can become a full-fledged war that spreads into a major war between NATO and Russia,” he said. “We are working on that every day to avoid that.” 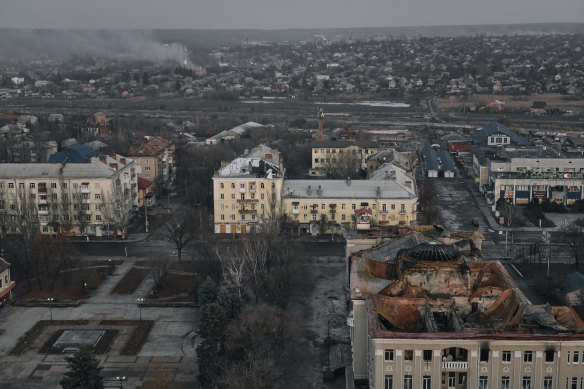 moke rises, background, in this aerial view of Bakhmut, the site of the heaviest battles with the Russian troops.Credit:AP

Earlier, in comments that reflected soaring tensions between Russia and the West, President Vladimir Putin suggested Moscow might think about using what he described as the US concept of a preemptive strike.

“Speaking about a disarming strike, maybe it’s worth thinking about adopting the ideas developed by our US counterparts, their ideas of ensuring their security,” he said.

Long before the Ukraine war, the Kremlin expressed concern about US efforts to develop the so-called Prompt Global Strike capability that envisions hitting an adversary’s strategic targets with precision-guided conventional weapons anywhere in the world within one hour.

Putin noted that such a strike could knock out command facilities.

“We are just thinking about it, they weren’t shy to openly talk about it during the past years,” he said, claiming that Moscow’s precision-guided cruise missiles outperform similar US weapons and Russia has hypersonic weapons that the US hasn’t deployed.

White House national security spokesman John Kirby on Friday told reporters Washington was growing concerned about the “deepening and burgeoning defence partnership” between Iran and Russia and would work to disrupt that relationship, including on drones.

Washington was sending a $US275 million ($404.5 million) package of aid to Ukraine to strengthen air defences and defeat drones, he said. 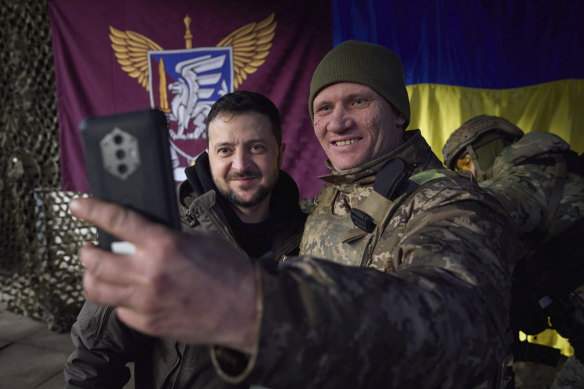 A Ukrainian soldier takes a selfie with President Volodymyr Zelensky, left, during his visit to Sloviansk, Donbas region in Ukraine.Credit:AP

“Russia is now attempting to obtain more weapons, including hundreds of ballistic missiles,” she told reporters. “In return, Russia is offering Iran an unprecedented level of military and technical support.”

The Iranian and Russian missions to the United Nations did not immediately respond to requests for comment.

Putin also said Moscow would probably do a deal over Ukraine one day but that Russia’s near-total loss of trust in the West would make an eventual settlement, which he did not elaborate on, much harder to reach.

On the ground in Ukraine, the entire front line in the east of the country was being shelled, said the governor of the Donetsk region, which is partly occupied by Russia. Five civilians were killed and two wounded in Ukrainian-controlled areas, the governor said.

President Volodymyr Zelensky said Ukrainian forces were standing their ground in the Donbas, made up of Donetsk and Luhansk regions, despite huge difficulties, but that Russian forces had reduced the town of Bakhmut to ruins.

“The situation on the front line remains very tough,” he said in an evening address. “I thank all our heroes, all soldiers and commanders who are… repelling assaults and inflicting significant losses on the enemy.”

‘The question of trust’

Putin earlier repeated an accusation that the West was “exploiting” Ukraine and using its people as “cannon fodder” in a conflict with Russia, and said the West’s desire to maintain its global dominance was increasing risks.

“They deliberately multiply chaos and aggravate the international situation,” Putin said in a video message to a summit of defence ministers from the Shanghai Cooperation Organisation and a group of ex-Soviet states.

He later specifically criticised France and Germany, which in 2014 and 2015 brokered ceasefire accords between Kyiv and Russian-backed separatists in eastern Ukraine, saying they had betrayed Moscow by supplying Ukraine with weapons.

“The question of trust arises. And trust of course is almost at zero… But nevertheless, in the final analysis we have to come to agreements. I have already said many times that we are ready for these agreements,” Putin said.

US Defence secretary Lloyd Austin criticised Putin on Friday as he voiced concern about Russia’s expanding nuclear arsenal. His comments came hours after Putin vowed that any country that dared attack Russia with nuclear weapons would be wiped from the face of the earth.

“As the Kremlin continues its cruel and unprovoked war of choice against Ukraine, the whole world has seen Putin engage in deeply irresponsible nuclear sabre-rattling,” Austin said, speaking at US Strategic Command, which oversees America’s nuclear forces.