Follow
Home » World News » It was used to grow rice and bananas, now the water-logged plot will accommodate the dead

Jakarta: The rising number of COVID-19 infections and hospitalisations in Indonesia have forced the provincial government in Jakarta to convert vacant and swamp land into cemeteries in anticipation of the need for thousands more burial sites.

Officials are rushing to prepare up to 17,900 new plots on the outskirts of the metropolis of 10 million people. 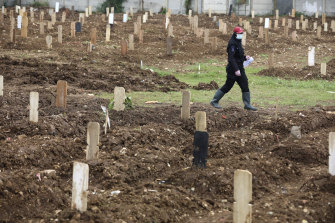 An employee walks among graves at the special section of Srengseng Sawah cemetery which was opened to accommodate the surge in deaths in Jakarta.Credit:AP

Ivan Nurcahyo spokesman for Jakarta’s parks and cemetery agency said around 3500 new burial plots would be ready in South and North Jakarta areas by February, in addition to 800 extra plots already in use at the COVID-19 cemetery of Bambu Wulung in East Jakarta.

The other thousands of new plots were still in the various stages of planning, he said.

In the space of four days in January, the number of daily burials in the city increased from 78 to 113. These include only confirmed and suspect COVID-19 deaths.

The government blamed the Christmas and New Year holidays for the worsening situation in the country. Jakarta has since extended its social restriction policy, which includes shorter opening hours for shopping centres and restaurants, to restrict people movement until February 8, to help bring down infection numbers. 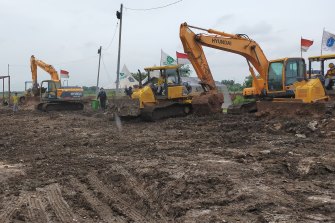 New cemeteries are being built in a hurry in Jakarta to bury the COVID dead.Credit:Karuni Rompies

Now, not far along, a 1.2-hectare block of land is being prepared to accommodate 1900 tombs next month.

Nurcahyo said if the existing cemeteries could not accommodate the increased number of coronavirus burials, the new facility and a new two-hectare, 1500-plot site being built on water-logged ground in North Jakarta would have to be fast-tracked.

Local residents have used the unoccupied land to grow crops such as rice, bananas and water spinach, Nurcahyo said. 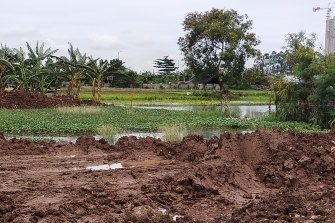 Asked if he anticipated having to open even more sites, Nurcahyo replied: “Our hope is that the pandemic will be over soon.”

He said the sites were also accepting the COVID dead from neighbouring areas such as Depok, Bekasi and Tangerang.

Indonesia recorded 11,948 new positive cases on Wednesday, bringing the total to 1,024,298. It has officially lost more than 28,000 people to the virus since the start of the pandemic, but experts say the number is likely to be much higher as testing is limited. Some 387 people died of it on Wednesday, according to the country’s official data. It has the highest death toll in South-east Asia.

Medical workers are among the groups most affected. Some 647 have lost their lives on the front line – among them 289 doctors, 27 dentists, 221 nurses, 84 midwives, 11 pharmacists and 15 laboratory staff, according to the Indonesia Medical Association or IDI quoted by local media. Among the doctors, 161 were general practitioners.

The administration of President Joko Widodo is giving vaccine priority to health workers and public officers after authorising the emergency use of the Chinese Sinovac vaccine. Joko and several top military, police and health officials received their second shots at the Presidential Palace on Thursday, along with a celebrity who is a social media influencer.

The Health Ministry data showed about 245,685 people have been vaccinated so far, most of them health workers, Reuters reported.

Authorities have been criticised for low testing and tracing rates, and for focusing on vaccines at the expense of better enforcing health protocols, which are less strict than in most countries.

Health Minister Budi Gunadi Sadikin said earlier this week that improvements would be made to contain the virus and urged the public to follow regulations.

“We need to flatten the curve […] so our health facilities don’t have too much burden and thus we could have more time to respond to this virus,” he told a news conference.

Hospitals have come under increasing strain, with dozens of people turned away from Jakarta facilities already at full capacity.

“The government should be stricter because we still can see crowds and those who don’t wear masks,” Sabriyanti, who uses only one name, told the Associated Press.