For a long time, the Reverend Peter Palmer has been at odds with his earthly boss. His unhappiness went beyond employee gripes to matters of the soul. “Four years ago, the archbishop [of Brisbane] sat in my lounge room, and said, ‘one day we will bless same-sex marriages’,” Palmer recalled this week. “I said, ‘no, I won’t’ … God said it’s a sin, to be in a same-sex relationship. And to bless sin? You just can’t do it.”

A few weeks ago, he quit. He gave up his bricks-and-mortar church, a pretty yellow-brick building south of Brisbane, as well as the stipend that covered his bills, to defect to a breakaway movement. The Diocese of the Southern Cross shares his views on sex and marriage, and has the support of the socially and theologically conservative – opponents say fundamentalist – Anglican dioceses of Sydney and Tasmania. 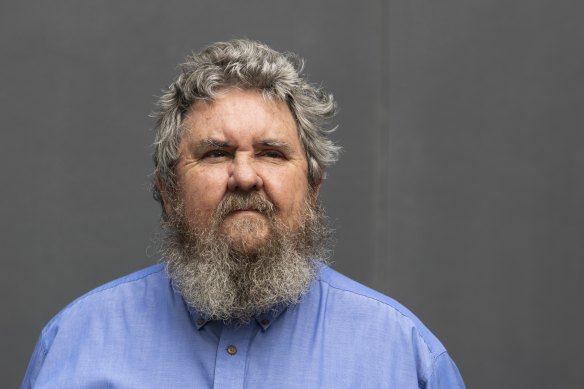 Reverend Peter Palmer quit his church in Brisbane to be the first priest in the Diocese of the Southern CrossCredit:Alex Ellinghausen

Last Sunday, Palmer ran the new church’s first-ever service at an RSL club. Ten minutes beforehand, he was nervous. “There were about 10 people,” he told a church broadcaster, inner Sydney priest Dominic Steele. “All of a sudden, another 30 people came in and we started to worship God together in a whole new style of Anglican worship.” Half his congregation had defected with him, including two of the three musicians. “It felt good … we didn’t feel the heaviness and burden of darkness around us.”

Anglicanism owes its beginnings, in part, to a schism over marriage between Henry VIII and the Catholic Pope. Marriage has now split the modern church. Some, like Palmer, believe the Bible is clear that a godly union can only be between a man and a woman, and there should be abstinence outside it. Others disagree, saying the scriptures are far from definitive. Many Australian dioceses are erring on the side of theological caution, and not blessing same-sex unions. The debate has caused deep distress for gay Christians who want their love acknowledged.

The splintering that culminated in this week’s rupture of the Australian church began 20 years ago, when an openly gay, non-celibate man was elected as a bishop in the United States. Angry, orthodox Anglicans began a rival church, just as Australian rebels have now done. The American split led to protracted legal fights over millions of dollars, accusations of schism and heresy, and a war over which side’s adherents were the true Anglicans.

Prompted by events in North America, the Sydney Diocese – particularly then archbishop Peter Jensen – played a significant role in creating an international alliance between like-minded churches, called the Global Anglican Future Conference, or GAFCON. The breakaway north Americans joined, as did many African countries, such as Nigeria, Uganda and Rwanda. Those churches no longer wanted to be with those “in fellowship” with the Archbishop of Canterbury because their reading of the Bible was too loose. 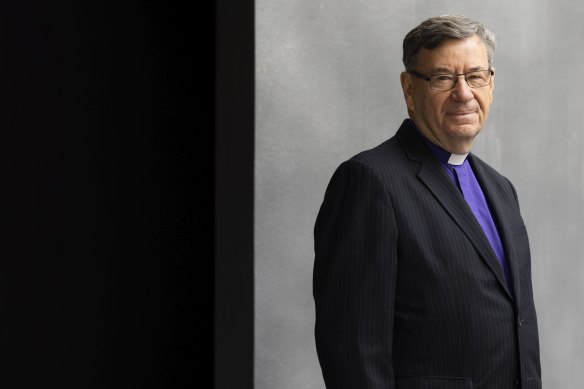 The former archbishop of Sydney Glenn Davies was instrumental in the formation of a more conservative international Anglican fellowship.Credit:SMH

In 2008, when GAFCON first met in Jerusalem, the Herald predicted the new alliance would turn the church into a “a sort of Balkan confusion in which national branches turn their backs on ­each other, [and] bishops dabble in one another’s territory”, and that Bible-focused Anglicans would build a fence against gay-tolerant “liberals”. Many would argue that has now come to pass.

In the years since, Sydney’s brand of orthodoxy has sprouted in other parts of the country, where views tend to be more moderate. Concerned those pockets would get short shrift from their progressive bishops, GAFCON Australia – which has representatives from each state – decided to set up a breakaway church. Over the past year, it set up a business and charity called the Diocese of the Southern Cross, a potential “lifeboat” for Anglicans who share their concerns about the direction of the church.

It pulled the trigger after a vote at the national Anglican synod (a church parliament) in May when the country’s bishops vetoed Sydney’s motion – 10 in favour, 12 against – affirming that marriage was between a man and a woman. In some circles, the bishops are known as the “faithful 10”, and the “unfaithful 12”. Some of the latter say it was not the definition of marriage as between a man and a woman they objected to – that, after all, is doctrine – but rather the hurt the motion would cause gay Anglicans. 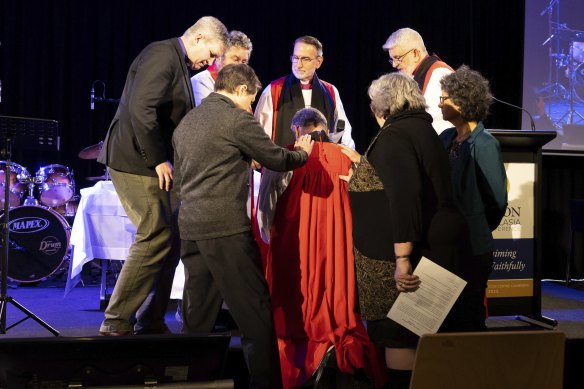 Former Sydney archbishop Glenn Davies was sworn in as the bishop of the breakaway Diocese of the Southern Cross on ThursdayCredit:Alex Ellinghausen

The chair of GAFCON Australia, Richard Condie, who is also bishop of Tasmania, says the issue is, at heart, about the authority of the scriptures. “Innovations” around same-sex marriage are forcing people “who [listen to their] conscience on the authority of the Bible” to leave their churches, like Palmer did. “There will be congregations [in Australia] who will leave with their ministers who leave, and they’ll walk away from their buildings, they’ll start worshipping in school halls and RSL clubs and lounge rooms,” he tells the Herald.

“We don’t know whether there will be masses, or just a few. We’re not recruiting people. It’s just if they do [leave], they’ll have somewhere to go.” In a statement to Anglican organisations on Thursday, Sydney Archbishop Kanishka Raffel said the new church was sad but necessary, and he extended the hand of fellowship to it. “May God bless Bishop Davies and his work.” Sydney, however, had “no intention” of leaving the Anglican Church of Australia, and would keep trying to change it from the inside.

The more progressive dioceses – Perth, Brisbane, Wangaratta, Newcastle – are the ones most likely to see defections from orthodox Anglicans. As the first bishop of the new church, former Sydney archbishop Glenn Davies, put it: “It will send shivers down the spines of some bishops in the Anglican Church of Australia.”

The most senior woman in the Australian Anglican Church, Kay Goldsworthy – who was criticised by Sydney for ordaining a male deacon living in a same-sex marriage – said the only thing she was worried about was parishioners who might be anxious about the split. “My spine is absolutely intact,” she says. “It is not shivering.”

Some believe the seeds of the Diocese of the Southern Cross were sown three decades ago, during the fight over the ordination of women. There were threats of a split then, too. Back in 1992, Laurence Scandrett – who is a secretary of the new Diocese of the Southern Cross – and two other Sydneysiders took the bishop of Canberra-Goulburn to court over his plans to ordain 11 women. The matter went as far as the NSW Court of Appeal, which said it had no power to stop it. They also tried to annul the ordination of 10 women in Western Australia. 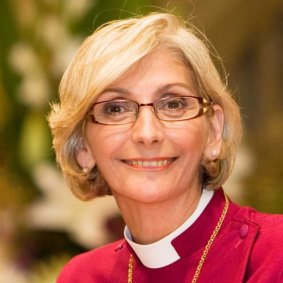 The Archbishop of Perth, Kay Goldsworthy.Credit:Anglican Diocese of Perth

Up in far north Queensland, the church did rupture. In 1997, members of the Torres Strait Regional Anglican Council seceded from the Anglican Church of Australia, and $1 million in investments and $100,000 in trust funds were in dispute. Their decision was partly driven by concerns the ordination of women betrayed the “church of the fathers”. The fallout is felt to this day, says North Queensland bishop Keith Joseph. “Schisms, splits, always hurt,” he says. “There has been an awful lot of hurt and anger.”

Sydney remains one of the few dioceses in the English-speaking world to ordain only men to the priesthood. Supporters believe the bible was clear throughout both the old and new testaments about male headship – “the husband is the head of the wife” (Ephesians 5:23) – and that men and women have different roles in life, priesthood being one of them (Sydney ordains women as deacons). Others read those passages differently, noting historical context; the old and new testaments condone slavery, too.

Opponents of women’s ordination “ignore a lot of biblical evidence that shows the opposite; women as leaders in the early church”, says Reverend Professor Dorothy Lee, a scholar at Trinity College Theological School in Melbourne. “There are also very few verses that say anything negative about homosexuality in the New Testament. Those verses are disputed by scholars; we’re not certain what Paul is talking about.

“The Sydney people, and this new diocese, claim their interpretation of the bible is not only right, but it’s the only one possible,” says Lee. “They will not engage with the scholarly world in disputed texts. That hubris really troubles me from a Christian point of view.”

Sydney priests reject accusations of religious uniformity. One, in an off-the record conversation, told the Herald he did not have a problem with civil same-sex marriage; some of his fellow conservatives voted yes in the 2017 postal vote. The issue was with the church blessing.

Some wonder whether Sydney, having learnt its lessons from the dispute over women’s ordination, is adopting a different strategy to protect traditional marriage. “You could say it’s a bit of payback,” says Muriel Porter, a Melbourne-based Anglican journalist and historian. “The diocese lost that battle in 1992, when general synod [an Anglican parliament] by one vote allowed women to be priests. I have a feeling they’ve lost that, but they’re not going to lose anything more.”

The ordination of women could be an issue for the Diocese of the Southern Cross, too. Davies, who was sworn in by fellow Anglican bishops on Thursday, has opposed it, as has Scandrett. But Condie ordains women. “This is not of the same order as the sexual ethics matters,” says Condie. “There will be a variety of views in the Diocese of the Southern Cross, but we accept ordained women.” When it is big enough to have its own synod, it will make its own decision.

Both sides of the latest schism hope there will not be a protracted legal fight. There’s already disquiet over the new church’s use of the term “Anglican”.

Gary Weatherill, the Bishop of Ballarat, questioned whether Sydney and Tasmania could straddle both sides. “More will need to be discerned about the integrity of being paid, fed and watered by an Australian Anglican Diocese, while simultaneously advocating that people should leave the Anglican Church of Australia to join this newly established ecclesial community,” he wrote to clergy on Thursday.

Meanwhile, rebel reverend Peter Palmer has now taken a job as a bus driver to make ends meet. His wife is also looking for a job, until the parish grows enough for them to survive on churchgoers’ donations. But he has no regrets. “It’s either all of the Bible, or none of the Bible,” he says. “God says marriage is between a male and a female. That’s it, end of story. I’m going to stand against this, even if it costs me everything I have.”