Follow
Home » World News » ‘It’s damn good to be back’: Crowds return to the Warrnambool races

‘It’s damn good to be back’: Crowds return to the Warrnambool races

Many businesses have dreaded turning away unvaccinated customers but for John King, manning the gates at the Warrnambool Racing Club on Thursday was a straightforward affair. 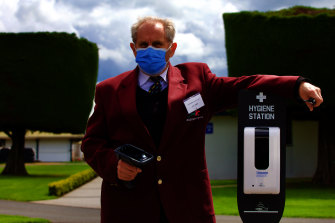 John King met punters at the gates on Thursday.Credit:James Mepham

Warrnambool is the first racing club in Victoria to have spectators at the track since July, with 300 double vaccinated or medically exempt attendees allowed in for what was set up as a trial for hosting events in the vaccine economy.

Mr King, who has been gatekeeper at the club for the past eight years, was centre of attention as punters flooded in.

“It’s damn good to be back,” the 75-year-old said. “Sitting at home doing nothing all the time, it’s not good.”

Racing has continued throughout the pandemic but only jockeys and industry participants have been allowed to attend, with horses racing to empty grandstands. 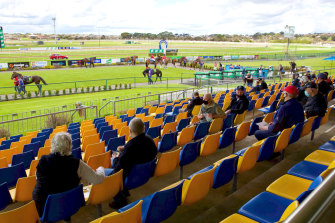 Punters return to the Warrnambool races – the first time Victorian spectators have been trackside since July.Credit:James Mepham

The race day was selected by Country Racing Victoria and the government for an event trial after Warrnambool hit 95 per cent of its eligible population receiving their first vaccination.

Attendees Matthew Bourke and Sarah McKenzie had a prime position in the grandstand, where they were introducing their newborn son to the races in one of his first outings at five-weeks-old.

The pair, from Ballarat, are keen racegoers and were happy to include a trip to the races in a visit to Warrnambool to see friends and family.

“Warrnambool is always beautiful, it’s turned the weather on and it’s really nice to be able to find some normality back in life,” Ms McKenzie said. 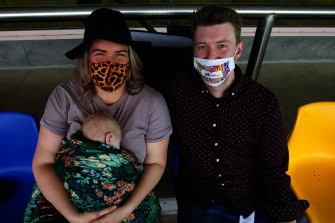 Sarah McKenzie and Matthew Bourke with their baby Finley Bourke in the grandstand.Credit:James Mepham

“The Service Victoria app was super simple to connect your [vaccine] certificate through to the app and then to show them on the way through the gates.”

Only one bookie was in attendance for the small crowd. Roger Wright from Wright Odds said that while he would have liked to see more people “it’s good to be here, win, lose or draw”.

A Warrnambool local, Mr Wright has been attending the races for 40 years and said it was not the same watching on television without the people or the atmosphere.

Small bookmakers like Mr Wright lost all their business during the lockdowns to the large online betting agencies. 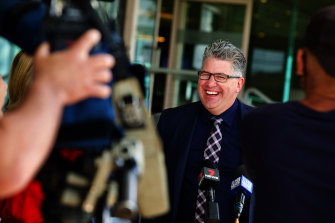 For the Warrnambool Racing Club and the broader racing sector, the day was an important trial.

Club chief executive Tom O’Connor said the club could hold up to 20,000 people at the track.

“We’re a strong membership club, so it means a lot to our members particularly, and the owners in the industry, just to see the smiles on their faces.”

He said the racecourse was near its limit of 300 people for the day and they didn’t have to turn anyone away.

“For us today it’s about learning,” Mr O’Connor said. “If we can learn one or two key things out of today that we can pass on to other businesses and other events and other race clubs … I think that’s a huge positive for moving forward into spring and summer and Christmas.”

Back at the gates, Mr King said the admission process worked well when patrons had already installed the Service Victoria QR code technology but some attendees had difficulty linking their certificate to the app.

The club is providing feedback to the government ahead of Melbourne Cup Day, where 10,000 racing fans will be in attendance on November 2 if the state reaches its 80 per cent double-dose threshold.

Macon and Morrison have ‘candid’ phone call over ‘broken trust’

Who are Aiden Fucci's parents Crystal Smith and Jason Fucci?