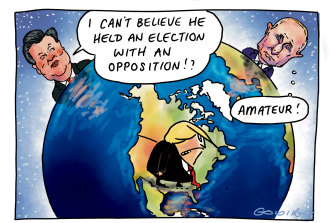 To submit a letter to The Age, email [email protected] Please include your home address and telephone number.

Your letters section (The Age, 23/1) illustrates the false dichotomy that has arisen in the debate over Australia Day: to question the wisdom of holding Australia Day on January 26 does not mean we can’t be proud Australians, as some have suggested. It is wilfully obtuse to suggest it.
It is very obvious that Indigenous people – or First People – all over the world still feel the painful echo of the colonial shock. Emotional time does not track clock time.

Years ago I asked an indigenous guide in Peru whether his people still felt the echo of the Spanish conquest. Yes, he said, and added that sometimes he felt that he had two identities, one indigenous and the other New Spanish.

By most measures Australia is one of the most benign places on Earth in which to live. That shouldn’t rule out self-critique and adjustment when it is for the greater good. A reflection on Australia Day, supported rather than routinely opposed by government, would be a sign of our maturity as a nation.
Michael Read, Carnegie

Accept the challenge
It is sad that it seems so hard to celebrate our nation on January 26. It would seem whatever date was picked there would be a problem for some.

Like all nations, we have a chequered history, things of which we are proud and things we regret – but we are Australians and we have the challenge of building a strong and inclusive future.
Tolerance, reconciliation and a desire for the common good are needed from us all.

A spirit of inclusion
Archie Roach, sharing his thoughts on the concept of creating a new national anthem (Spectrum, 23/1), offered the following: ″⁣We belong to an ancient land, we belong to an ancient story … That’s not just talking about First Peoples. I believe that everybody who lives in this country, whether they understand it or not, they belong to that story.″⁣

Thank you, Archie. Your spirit of inclusion, acknowledgement and respect is a shining example for us all.
Jo Firth, Highton

There are alternatives
So who cares if Google leaves Australia? Why do so many people think that the only search engine is Google? There are several others. I have used Microsoft Bing for many years because I don’t want to support Google (although I do watch YouTube).
Go on, be brave and do your searching elsewhere if Google won’t pay a proper fee for news from bona fide media companies.
Nigel Hungerford, Hawthorn East

Unnecessary gongs
The controversy over the awarding of Australia Day honours continues and will never be resolved until a line is drawn stating that people only get honours for helping or leading the community above and beyond what they do on a day-to-day basis.

People are heartily sick and tired of seeing the names of people getting gongs for doing no more than their day jobs, for which they are usually very well rewarded already. Massaging their egos is not necessary.
Ross Hudson, Mount Martha

Shameful stories
I am so ashamed. Friday’s Age (22/1) has more than one report on matters that might well cause us to hang our heads. Once again, Australia is rebuked internationally, when 31 United Nations member states called on Australia to raise the age of criminal responsibility.

How can we believe that 10-year-old children should be arrested, remanded and convicted? Especially when we know that more than half of them are Indigenous. Are we still living in the cruel days of the First Fleet, as the Prime Minister controversially reminded us?

There also seems to be no limit to the callousness with which genuine refugees are treated in our country. Those released last week after many years of detention, both offshore and then in Australian hotels, have been described by Peter Dutton as having been released ″⁣because it is cheaper″⁣ [than imprisonment in hotels].

I find this statement breathtakingly cruel. Where are our Australian traditions of fairness and compassion? I am still ashamed.
Gwenda Davey, Burwood East

PM is wide of the mark
It isn’t true, as Prime Minister Scott Morrison states, that the millions of different Australian historical stories are not in competition with each other (‴⁣⁣All stories should be respected’: PM″⁣, The Age, 23/1).

The whole point about opposition to the present choice of January 26 for celebrating Australia Day is that the stories of the appalling injustices from which stem the contemporary exceptional disadvantage of so many Indigenous Australians are neither being sufficiently heard nor adequately redressed.
Jennifer Gerrand, Carlton North

Conflicting emotions
Your correspondent’s letter fills me with conflicting emotions (″⁣Proud to celebrate our nation on January 26″⁣, 23/1). Australia has been kind to so many of us, and we have built a prosperous and largely peaceful nation. He is rightly proud of his achievements and thankful for his opportunities.

But let us not forget what allowed those opportunities to be created. Massacres, dispossession, deliberately spread diseases, poisoned rations and waterholes, the list goes on. Without these injustices, we wouldn’t have what we do; we still benefit from atrocities. If Australia is the lucky country, we are ″⁣lucky″⁣ these acts took place.

Have a little perspective, and think for a bit about those who are still suffering from what their ancestors endured, and what they still live through, not being so lucky as the rest of us.
Michael Puck, Maffra