‘It’s not tourism for me’: Meet Australia’s next space traveller

Like so many kids, Chris Boshuizen always wanted to go to space – since the age of four, according to his mum. And soon, albeit briefly, he’s going to realise that dream.

The Sydney-born venture capitalist is believed to become the third Australian to travel into space, following astronauts Paul Scully-Power and Andy Thomas before him.

Though unlike them, he is travelling only to the edge of space, on an upcoming joy flight with entrepreneur Jeff Bezos’s Blue Origin – a sub-orbital adventure just beyond the Karman Line, 100 kilometres above the mean sea level. 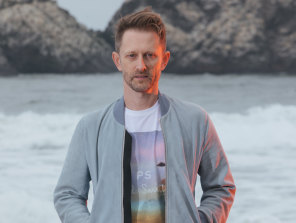 Australian Chris Boshuizen will join a 15-minute flight to the edge of space with Jeff Bezos’s Blue Origin.Credit:Peter Prato

Blue Origin’s New Shepard rocket will take off from Van Horn, Texas, 120 miles from El Paso, for a flight that lasts less than a quarter of an hour. Details are still tightly held – the trip is expected to occur in October, and there are rumours in entertainment media that 90-year-old actor William Shatner will be on board.

“It takes about four to seven minutes [to get up] – it’s very, very quick,” Dr Boshuizen said. “Then you’re in freefall. You’re in a little capsule and the capsule detaches. It floats by itself for about four or five minutes. You get to see the blackness of space and the curvature of the earth, the atmosphere and all of those things.”

The capsule then lands somewhere in the desert under the guidance of its parachutes.

This is the frontier of the nascent space tourism industry, propelled by high-profile billionaires like Mr Bezos, Richard Branson (Virgin Galactic) and Elon Musk (SpaceX). 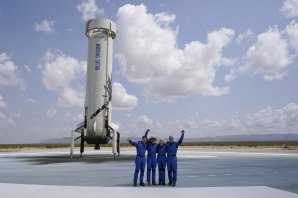 Jeff Bezos, second from left, in front of the rocket that landed safely after their launch from the spaceport near Van Horn, Texas, in July 20. Credit:AP

That brief glimpse of the planet doesn’t come cheap. Dr Boshuizen won’t talk about the ticket price, but Virgin Galactic recently opened sales for flights next year starting at $US450,000 ($618,000) a seat. He nagged Blue Origin about it for years, only to be brushed off and told to “join the mailing list”. In March he finally got the call. “They said, ‘hey, you’ve been persistent’.”

The fact so few Australians have entered space can be surprising. Melbourne-born Philip K. Chapman, who died earlier this year, trained as an astronaut with NASA in the 1960s but did not get to fly. A few years ago Brisbane man Tim Gibson won a seat on a Unilever-sponsored joyride to promote the deoderant brand Axe, but the plan never eventuated.

Dr Boshuizen likes to say he is “the first Aussie Aussie going up”, because unlike the others he has never taken out American citizenship. “I’ve been stubborn about it,” said the 44-year-old who lives in San Francisco. “I’m still on a work visa here in the US after 14 years.”

Space tourism has a slew of critics who argue it is a vanity project for the super-rich, a waste of money and environmentally destructive. The fact it has burgeoned this year (Mr Bezos and Mr Branson both boarded joy flights in July) amid the profound health and economic impacts of the pandemic has only served to underline these concerns. 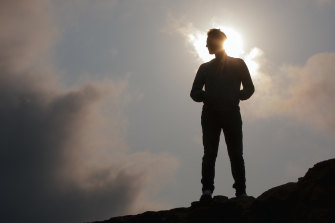 “The days of governments having control over space is over”: Dr Chris Boshuizen is a believer in democratising space flight.Credit:Peter Prato

But Dr Boshuizen – who had a humble upbringing, attending Tumbarumba High before receiving a housing scholarship from the University of Sydney – looks at it very differently.

“It’s not tourism for me,” he said. “I’m going up because I think this is an important mission to let the world know that the world has changed. The days of governments having control over space is over.”

Dr Boshuizen has spent much of his life improving and simplifying space technology – at NASA’s Ames Research Centre he worked on a program that turned a smartphone into a satellite, before co-founding Planet Labs, which has sent more than 450 mini camera satellites into orbit.

“My real goal is to open up the space frontier and for us to live and work in space,” he said. “For the human race to grow and be able to do that is really important.”

Space travel might be out of reach for most now, but Dr Boshuizen envisages a day when it is no more unusual than flying to London or New York.

“They didn’t have Ryanair in the 1950s. Jet travel was extremely expensive. [Now] we live in the jet age,” he said. “In 50 years people are going to look back at what’s happening now and go ‘yeah, that was the beginning of the actual space age’.”