Jay Leno maintains his sense of humor in his first interviews since the Nov. 12 car fire that left him with severe second-degree burns on his face, upper body, left arm and hands.

The former Tonight Show host, 72, sat down with Hoda Kotb, in his 140,000 square foot Burbank classic car garage, for an interview that aired on Wednesday's Today. He also gave a print interview to People magazine.

"The fact that I have smooth skin, pouty lips and a tighter butt has nothing to do with the accident," Leno quipped on Today in an interview that saw him telling joke after joke. "That was all secondary."

Leno was in his garage, with his long-time friend Dave Killackey, working on his 1907 White Steam car, which had a clogged fuel line. He was under the car. Air was blown through the clogged line, and Leno was hit with a face of gas. At that point, the pilot light jumped and "my face caught on fire." 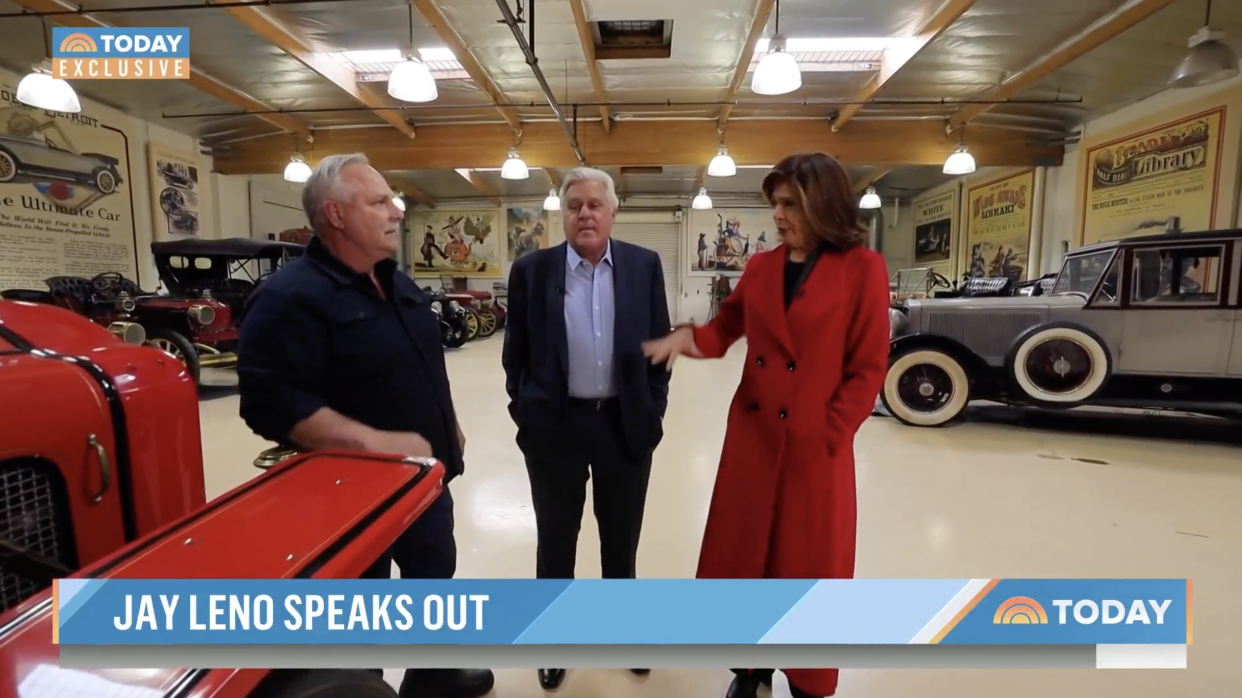 Killackey, who was just a few feet away, said Leno "downplays" what happened but he was "engulfed." His friend "couldn't see [Leno's] face. It was a wall of fire." He grabbed Leno and put the comedian's face against his chest to smother the flames. He then worked to put the the car fire out.

Leno went into the bathroom to put cold water on his face. When Killackey joined him, he said the Jay Leno's Garage host's injuries were "horrible… When the first two layers [of skin] are peeling off right now, you know, this is a real issue." He called 911 for his friend and paramedics arrived.

When doctors saw Leno, they advised that he immediately go to a burn center. However, he said," I drove home right after" and stayed there for the night. Of that decision he explained, "Well, my wife of 42 years, Mavis, "doesn't drive anymore. I didn't want her stuck and not knowing what was going on. It just seemed like the right thing to do — and I think it was." Leno, who joked that Mavis was "thrilled" when she saw him with his burns, went to the burn center the following day.

The couple spent the next 9 days at the Grossman Burn Center, with Mavis sleeping by his side. The treatment process involved doctors scraping away layers of burned skinned, obviously a painful procedure. They said Leno never complained while he was there, cheering up patients instead and delivering pizzas to the nurses. 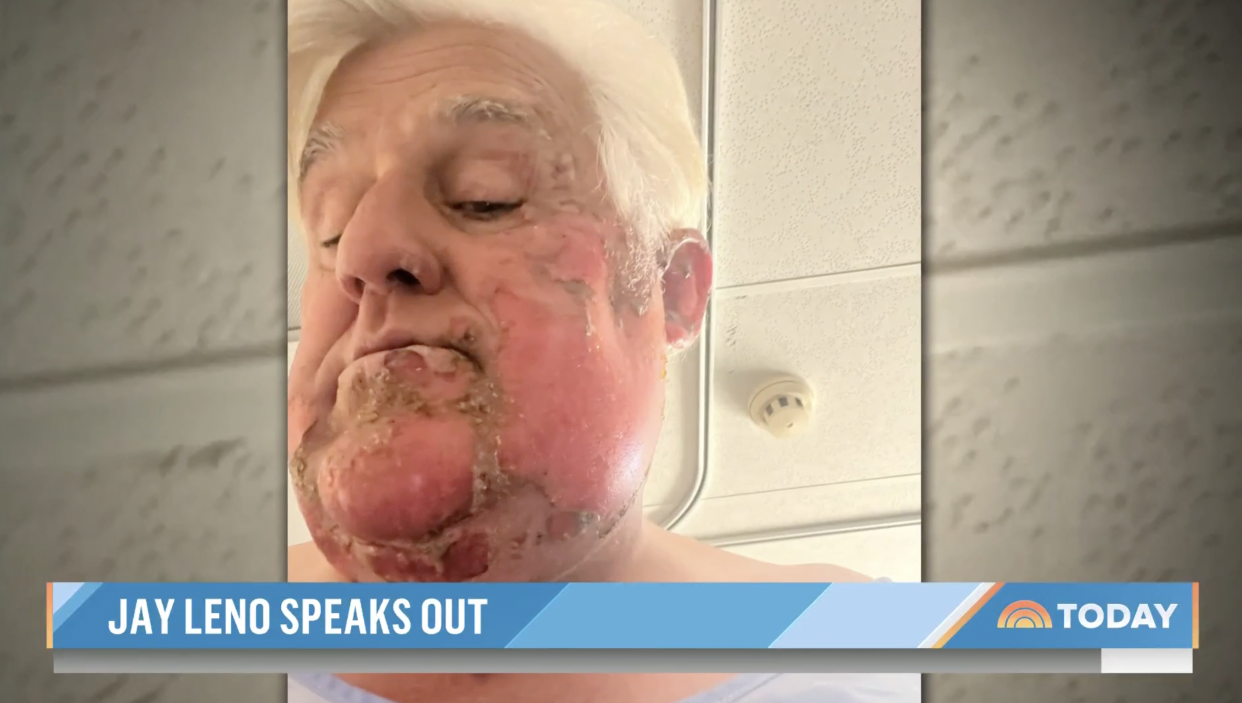 Leno underwent two skin grafting surgeries (one with human cadaver skin and another with pig intestine, according to People) to regenerate new, healthy skin on his face and neck. His ear had to be reconstructed. His hands were also badly burned. Kotb noted that Leno provided many images of his injuries but Today wouldn't be showing them all.

For eight hours a day, he was in a hyperbaric chamber — which he described as a sealed glass coffin — to help oxygenate tissue and help him heal. He said he'd think about his act and come up with new jokes to pass the time. 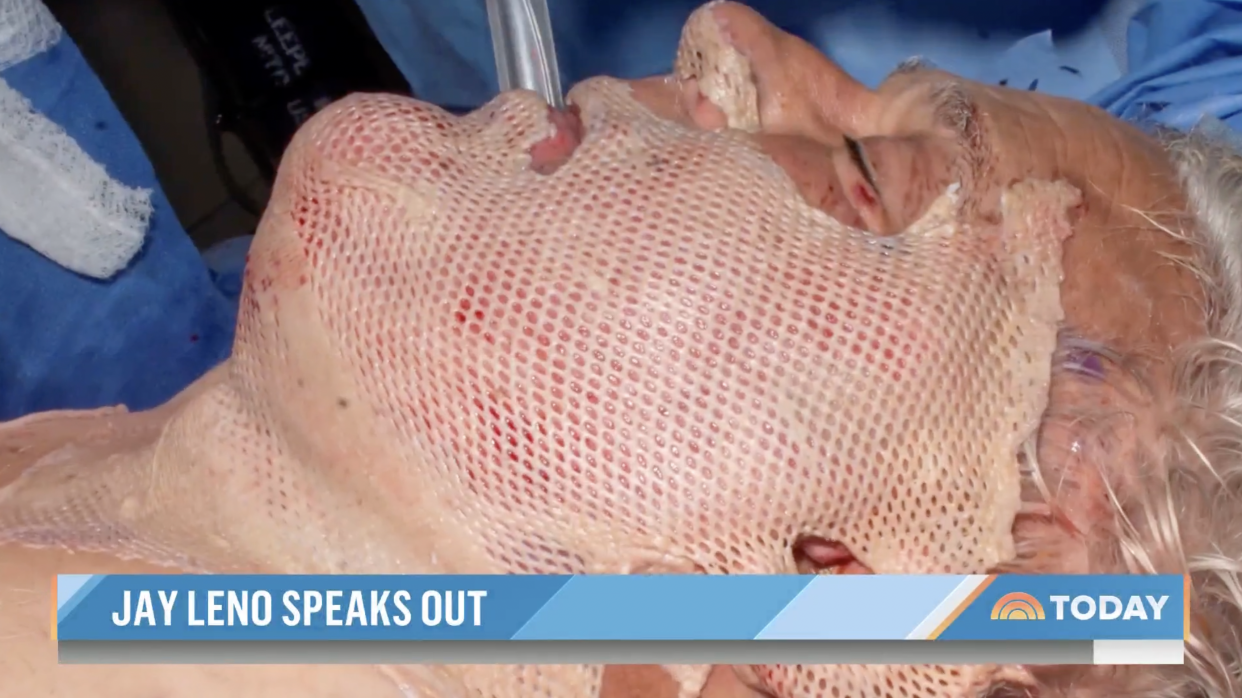 From the TV interview alone, one probably wouldn't even be able to tell that Leno just went through the ordeal. Kotb asked if he was worried about how he would look.

"When you look like me, you don't really worry about what you look like," Leno joked. "If I'm George Clooney, that's going to be a huge problem."

A week and a half after he was released from the burn center, Leno was back on stage telling jokes for a private event. He said the people in the audience "thought he'd be more burned up" than he was. "People are disappointed you're not a briquette."

Of maintaining a sense of humor about it all and not complaining publicly, Leno said, "In the real world … people who work with their hands get injured every single day. I don't want to be some whiny celebrity. Oh, boohoo. I don't want to be one of these people. 'I have all these cars and this beautiful house and look what happened to me!' People are like: Shut up!"

For the record, Leno is not skittish about getting back under his cars, his longtime pastime. "No," he replied. "Did I learn from this? Of course not."

In Leno's interview with People, he said that while his face was on fire, it felt "maybe like the most intense sunburn you've ever had, that'd be fair to say." He also said he knew to shut his eyes and hold his breath, before he was pulled out from under the car, because, "I'm not a panicky guy, but I knew if I breathed in I could scorch my lungs. I was under the car maybe 10 seconds before Dave pulled me out. Any longer than that I could have lost my eye."

He also said he declined to take pain medication during at any point, quipping, "The pain is a reminder that I'm an idiot!"

Leno also spoke about all the love he received after news broke. He got a phone call from President Biden. John Travolta sent him a "big Italian basket." Tom Selleck sent flowers. Russell Crowe reached out from Australia.

"I've been in this business a long time and to feel that love was really touching," he told the outlet.