Follow
Home » World News » Jessica Simpson is 5 years sober: I know I 'always will get through it'

Jessica Simpson is 5 years sober: I know I 'always will get through it'

Five years sober. Jessica Simpson commemorated the anniversary of her decision to stop drinking with an emotional social media post.

Read article: Stars Who Revealed They Got Sober

“I needed to be in my studio today because this is where I ground myself and heal. As much as I have learned to block out destructive noise,” the Texas native, 42, captioned a video of herself singing her song “Party of One” via Instagram on Sunday, November 6. “Peoples’ comments and judgements can still hurt deeply with their incessant nagging ‘you will never be good enough.’”

Simpson — who shares kids Maxwell, 10, Ace, 9, and Birdie, 3, with husband Eric Johnson — went on to explain that she’s found the strength to get through such challenges through her sobriety. “The most important thing I have learned through the last 5yrs without alcohol being a guard for escapism, is that I CAN and ALWAYS WILL get through it,” she explained. “I am capable of pretty much anything I care enough about to put my mind to. I am present. I am deeply inspired. I am determined. I am honest. I care about other people.”

The “I Think I’m in Love With You” singer first told fans about her battle with alcoholism in her 2020 memoir, Open Book. She recalled carrying a “glitter cup” that was “filled to the rim with alcohol,” and Simpson realized she needed to make a change after Halloween 2017. 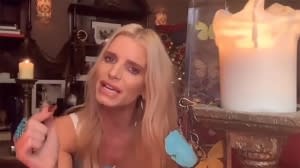 In the message marking her five-year sobriety journey, the Jessica Simpson Collection founder went on to explain that hitting the high notes helps her deal with hateful comments on social media. “I woke up at the same time anxious and insecure but also angry and defensive — like some of you,” she wrote. “I know what works for me and that is to let go and simply sing while lookin directly inside the mirror, straight in my eyes to really see and understand myself. I can connect with my heartbeat. I am stable and strong. I am home.”

Simpson concluded with “a little advice” for her fans: “Live inside your dreams and move through them. Don’t give up on yourself because someone else did. Stay true to YOU. It has worked for me in this chaotic life thus far. Nothin’ and nobody will rob me of my joy. Ya might come close but it is mine to own. Yours should be too.”

She received support from friends and family in the comments section, including sister Ashlee Simpson, who wrote, “Love you .”