On September 14, 1814, as he watched the British bombardment of Fort McHenry during the War of 1812, amateur poet Francis Scott Key wrote a verse that would become one of the most important in the national anthem of the United States: "And the rocket's red glare, the bombs bursting in air, gave proof through the night, that our flag was still there".

Two (and a bit) centuries later, and in the wake of a Capitol siege led by supporters of former President Donald Trump, Key's words hung heavily in the air at the 46th Presidential Inauguration. And then, in a way that only American television could package, Lady Gaga sang them. 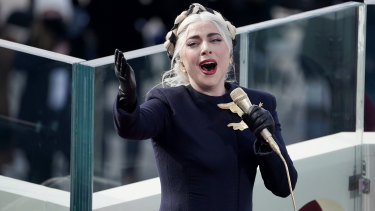 When viewed through the prism of American television, such moments in our shared cultural history inevitably become a strange amalgam of the pomp and circumstance inherited (and later rejected) by America from its British colonial parent, and the glittery and often insubstantial Hollywood circus which was built in its place.

Perhaps the most striking thing about this particular inauguration is that in a country not known for its appreciation of fine art, and in the wake of a presidency which favoured fast food over fine dining, such prominence was given to 19th century American painter Robert S. Duncanson and national youth poet laureate Amanda Gorman.

Duncanson's famous work, the oil on canvas Landscape with Rainbow, was chosen by incoming first lady Dr Jill Biden and placed on display in a Capitol ceremony, while Gorman became the breakout star of a day already bulging with celebrity heft, writing and reciting a poem titled The Hill We Climb.

But fear not if you are a fan of the Kardashians, America's pop cultural DNA is in no danger of up-scaling, but on such solemn occasions we gain a rare glimpse of the breadth of the American identity, not the slice which typically command's the lion's share of the media noise machine.

It is a by-product of the modern media age that we describe all such events as "made for television" simply because that is the way in which most people engage with them. In truth the inauguration of America's new president is properly made-for-television, because the COVID-19 pandemic requires it be so.

Though the pomp and pageantry played out as it has for more than 200 years, with military parades that evoke their ancient British equivalents, where mounted soldiers wear full dress uniforms and helmets with hackles, other aspects of Inauguration Day – the massive crowds which normally swarm through Washington DC, the private lunch held at the Capitol for the new administration and the Congress – were cancelled.

Instead, after performances by Lady Gaga, Jennifer Lopez and Garth Brooks at the inauguration itself, Americans got Parade Across America, a virtual "multi-community" event which would cross to the 50 states and six territories which fly the American flag, and is scheduled to feature Grammy-winning supergroup Earth, Wind & Fire, R&B singer Andra Day, the Trans Chorus of Los Angeles, the Washington Chorus and the Triumph Baptist Church Choir of Philadelphia. 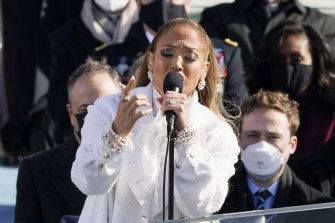 America's news channels and major networks all carried Inauguration Day coverage; some, such as the right-wing channels One America and The First were muted in their praise for the transition of power and the wave of change it seemed to augur.

Fox News, whose right-wing commentators drove much of the pro-Trump discourse, but whose masters no doubt appreciate the value of shifting with the tides, took a more centrist line. "The winds have calmed down here and the city of Washington has too," Fox News anchor Bill Hemmer said.

There was also an inescapable shift of tone that came with the absence of Donald Trump and the saturation-level coverage which followed his use of the Twitter platform as a de-facto press office; an unexpectedly powerful reminder of what the airwaves look and sound like when a single voice is not dominating what is carried on them.

And as much as it likes to tell you lies, television also inescapably reveals the truth: during his inauguration speech, as Biden's teleprompter reached a line where he was to thank former Presidents Clinton, Bush and Obama, who were all in attendance, Biden skipped it, perhaps thinking the omission of former President Trump, who broke with tradition by not attending, would contradict his message of unity.

At the same time, the camera's frame loves to tell heroic stories, so while Biden and vice-president Kamala Harris are billed as the stars of the show, the frame cannot resist zooming in on people like Capitol police officer Eugene Goodman, known as the man who engaged with and drew the pro-Trump insurrectionist mob away from the Senate chamber during the riots, who was given the job of escorting Harris to the inauguration stage.

And, of course, the day's breakout star was Amanda Gorman, the 22-year-old poet laureate, whose performance on the inauguration stage was easily as compelling as Lady Gaga's.

In the post-inauguration television analysis Gorman, who said her poem took its inspiration from the speeches of Abraham Lincoln, Martin Luther King Jr and Winston Churchill, became a widely praised piece of the visual jigsaw puzzle.

"We've seen a force that would shatter our nation rather than share it / would destroy our country if it meant delaying democracy / and this effort very nearly succeeded," she recited. "But while democracy can be periodically delayed / it can never be permanently defeated. / In this truth, in this faith, we trust. / For while we have our eyes on the future / history has its eyes on us."