Judges have been told they can ban the reporting of a transgender defendant’s previous name – or make their court appearance a total secret.

The ‘Equal Treatment Bench Book’, a 540-page document produced by the Judicial College, advises courts to avoid using gendered language and pronouns where possible and lays out guidance for dealing with trans issues in court.

The document is produced by the Judicial College – responsible for training judges in county, Crown, and higher courts in England and Wales, and tribunal judges in England & Wales, Scotland and Northern Ireland.

It states that a person’s ‘gender at birth or their transgender history’ should not be disclosed unless it is ‘necessary and relevant to the particular legal proceedings’.

The guidance continues: ‘In the rare circumstances where it is necessary in the proceedings to disclose a person’s previous name and transgender history, the court may consider making reporting restrictions to prevent the disclosure of this information more widely or directing a private hearing.’

The act makes an exception where disclosure is for the purpose of proceedings before a court or tribunal, but this exception ‘should be interpreted narrowly’, the Bench Book states. 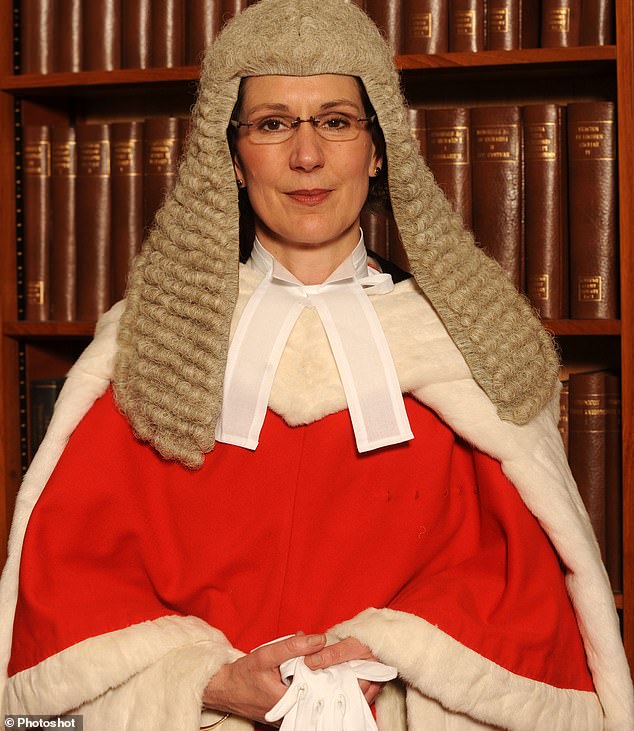 Chair of the college and Appeal Court judge, Lady Justice King (pictured) said the guidance is a ‘dynamic document’ which has served as a key reference to courts

A judge criticised the victim of an assault for refusing to call her transgender attacker ‘she’ in court.

Tara Wolf, 26, punched Maria MacLachlan, 61, at Speakers’ Corner in Hyde Park in 2017 when protesters clashed over the rights of trans women.

She was ordered to pay £430 in fines and costs after a judge declared the language of the transgender debate ‘antagonistic to say the least’.

Ms MacLachlan, who describes herself as a ‘gender critical feminist’, had her £120 Panasonic camera knocked out of her hand by hooded Wolf, who identifies as female.

Wolf claimed she was terrified any footage of her would be used to out her as transgender and acted in self defence.

She denied assault by beating but was found guilty by Hendon Magistrates.

Giving his verdict in April 2018, District Judge Kenneth Grant branded Miss MacLachlan ungraceful for failing to refer to Wolf as ‘she’ during the two-day trial.

He said: ‘When I asked Miss MacLachlan to refer to the defendant as she, she did so with bad grace.

‘The language of the debate is antagonistic and hostile.’

Wolf had admitted before attending the rally she had posted on a Facebook event page: ‘I want to f**k up some TERFS [Trans-Exterminatory Radical Feminists] they are no better than FASH. [Fascists]’.

Wolf, from Stratford, east London denied assault by beating, but was found guilty by Hendon Magistrates and ordered to pay a £150 fine, a victim surcharge of £30, and pay prosecution costs of £250.

It also raises the scenario of an offender who has changed gender and their right to be referred to in court using their preferred pronoun.

The guidance stated: ‘There may be situations where the rights of a witness to refer to a trans person by pronouns matching their gender assigned at birth, or to otherwise reveal a person’s trans status, clash with the trans person’s right to privacy.’

It went on: ‘In the rare circumstances where it is necessary in the proceedings to disclose a person’s previous name and transgender history, the court may consider making reporting restrictions to prevent the disclosure of this information more widely or directing a private hearing.’

Chair of the college and Appeal Court judge, Lady Justice King said the guidance is a ‘dynamic document’ which has served as a key reference to courts and it has been ‘admired and envied by judiciaries across the globe’.

Listed among its suggestions for more neutral language, the college advises judges to use the term ‘flight attendant’ instead of ‘air hostess’ and ‘chair’ instead of ‘chairman’.

‘It is important to respect a person’s gender identity by using appropriate terms of address, names and pronouns. Everyone is entitled to respect for their gender identity, private life and personal dignity,’ it adds.

The guidance also stated: ‘The ‘term queer is rapidly gaining accepted use as an umbrella term for those who are not narrowly heterosexual and not cisgender (ie identifying with their birth gender).

‘Stonewall advises that the term queer has been reclaimed by young people in particular who do not identify with traditional categories around sexual orientation and/or gender identity.

‘It has also become associated with various arts and cultural movements around the world, and it has entered academic discourse.

‘Nevertheless [the term queer] is still considered derogatory by some people in the LGBT communities, and it is therefore to be avoided’.

In criminal cases regarding violence against women, the college stated: ‘Some people object to the term ‘victim’ as it can imply passivity and helplessness. They may prefer the word ‘survivor’ which can convey resilience.’