The owners of an AirBnB based on the 1993 movie are now selling their creation for $1.3 million.

Todd Perkins finished building the three-bedroom, two-bathroom in a remote part of Washington State in Skamania County in mid-2021 but has already decided to put the unique property on the market.

Todd, together with his wife Jessica, built their prehistoric home over a period of two years before opening it up to guests on AirBnb.

Those brave enough to spend the night among the fearsome creatures can pay just over $500-a-night to stay over. 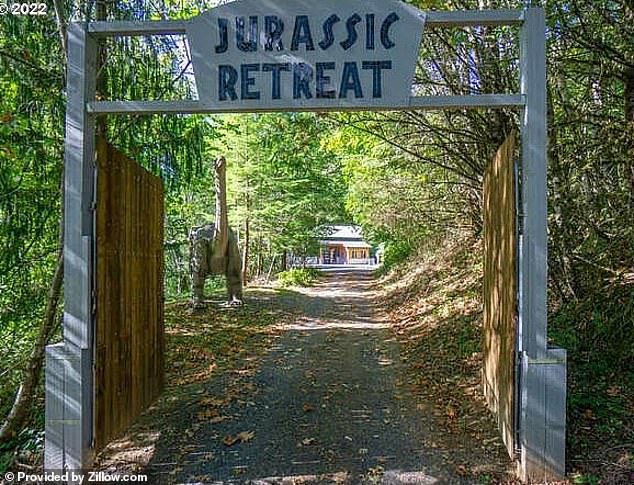 Welcome to Jurassic Retreat! A Washington State couple are selling their Jurassic Park-themed AirBnb for $1.3 million 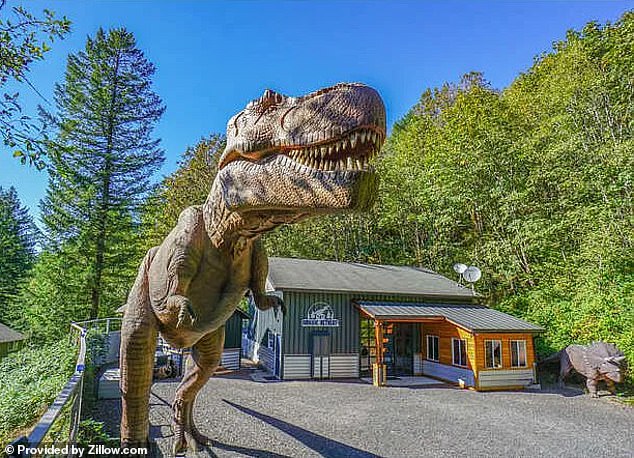 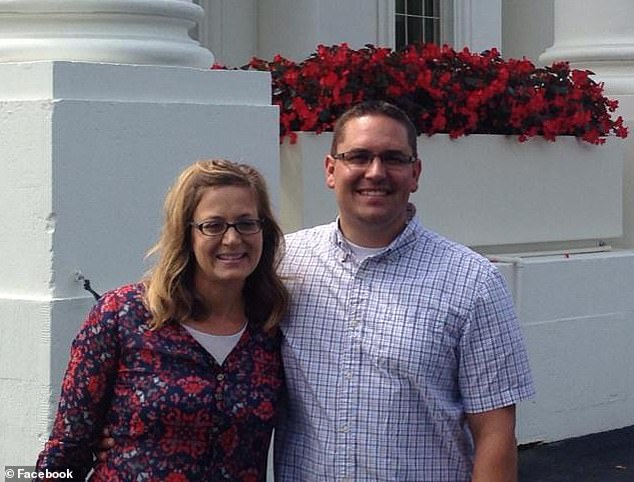 Todd, together with his wife Jessica, built their prehistoric home over a period of two years before opening it up to guests on AirBnb 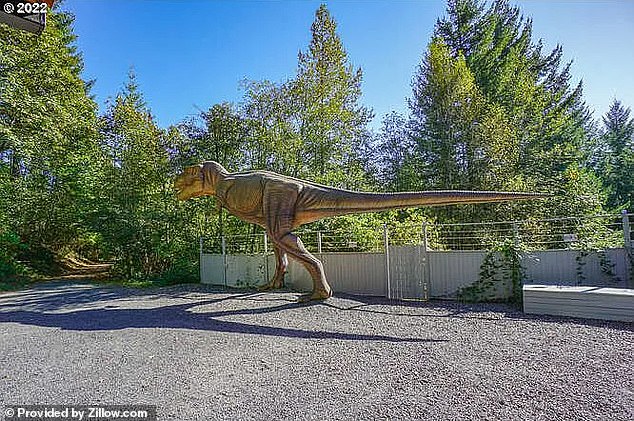 The animatronic creatures were built in China, move and make sounds 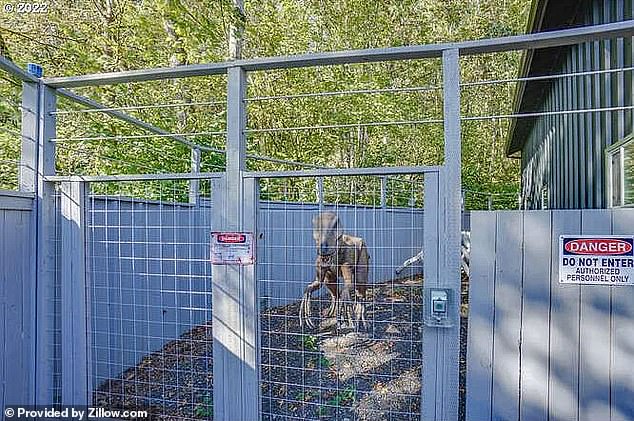 There are lots of small touches that pay homage to the 1993 film, including cages with signs warning of electric shock to hold back the prehistoric creatures 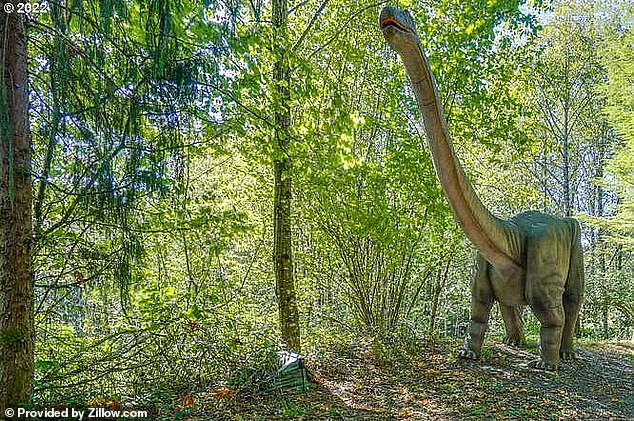 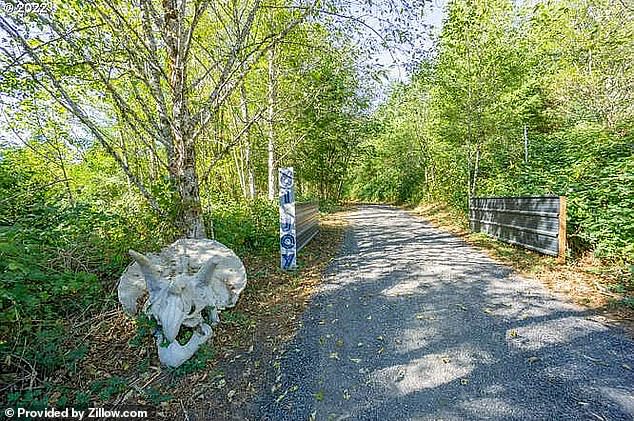 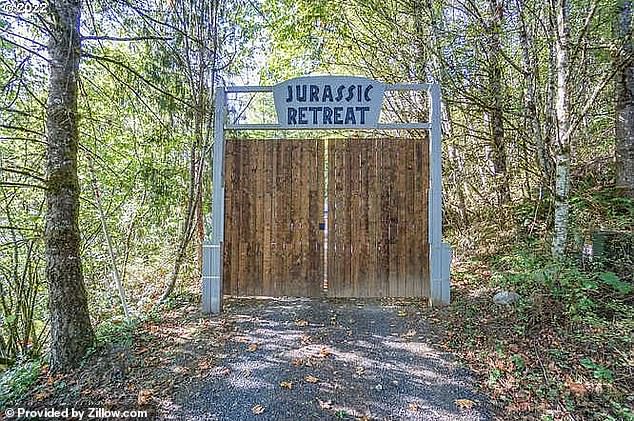 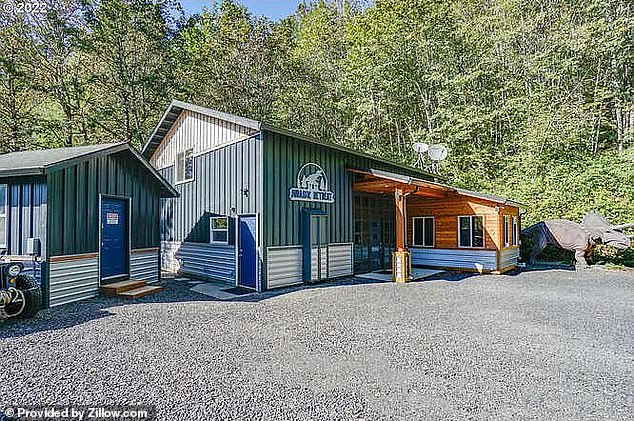 The home comes complete with its very own animatronic dinosaurs, including a lifelike and terrifying Tyrannosaurus rex that acts as a kind of guard to the entire compound.

All those visiting must pass through ‘Jurassic Retreat’ gates that resemble those from the Jurassic Park film.

Once on the other side, the landscape is almost jungle-like to resemble Isla Nublar, the fictional remote island where the movie was set.

A number of other creatures also reside close by including a Velociraptor that overlooks the home’s hot tub.

Other resident lodgers are also included in the sale price, such as a Triceratops and Brontosaurus.

Inside, there are a number of dinosaur-inspired touches from artwork on the walls as well as some dino footprints.

Todd, who described himself as a business owner and entrepreneur, said that he loved dinosaurs growing up and that was the inspiration behind the design of his quirky home.

‘Everything was dinosaurs from the age of five, throughout my childhood,’ he told TriCity News.

Perkins helped design the dinosaurs’ coloring and their postures with a manufacturer in China.

Each room in the house pays homage to characters from Jurassic Park, like Jeff Goldblum’s Dr. Ian Malcolm.

One of the bedrooms is themed after paleontologist Dr. Alan Grant, a main character in the first film played by Sam Neill. 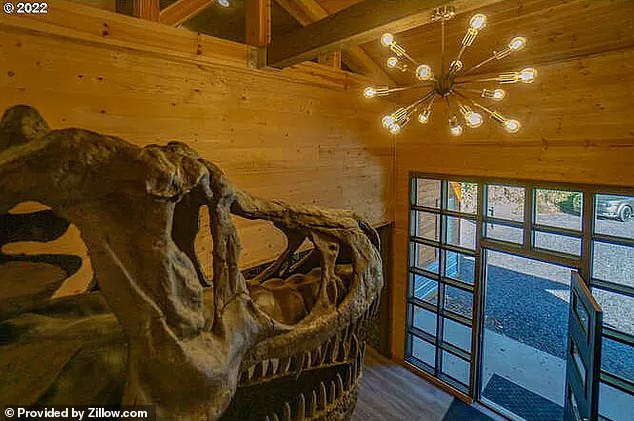 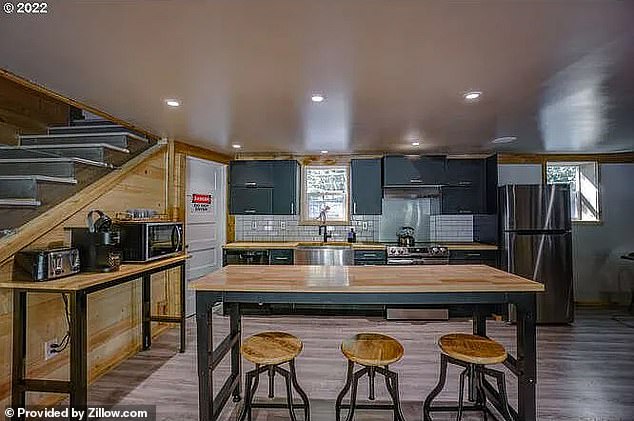 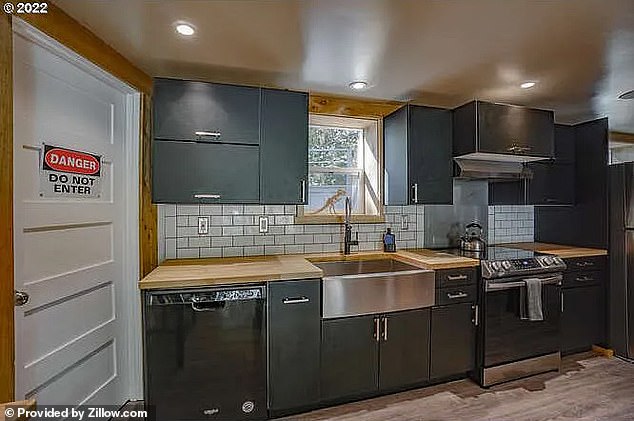 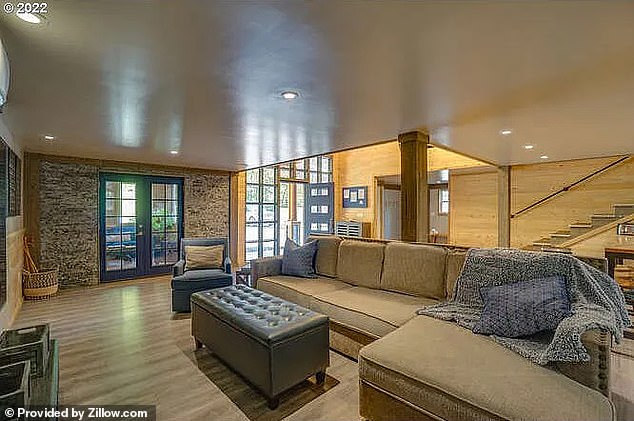 AirBnb guests can currently stay for just over $500-a-night 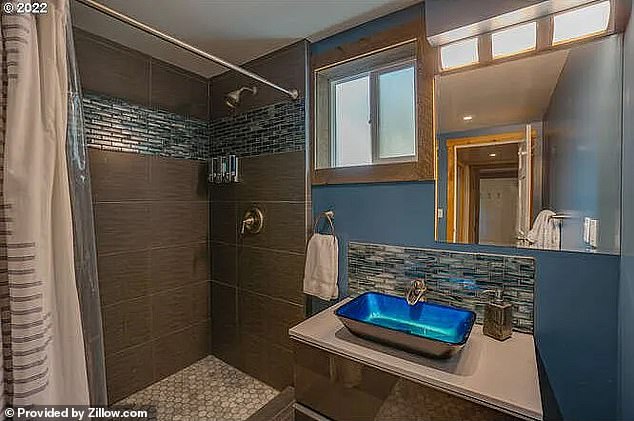 Over a period of two years, Todd, with the help of wife, Jessica, built the retreat 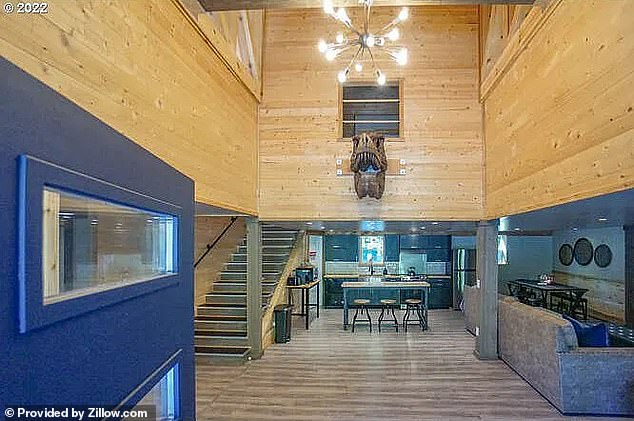 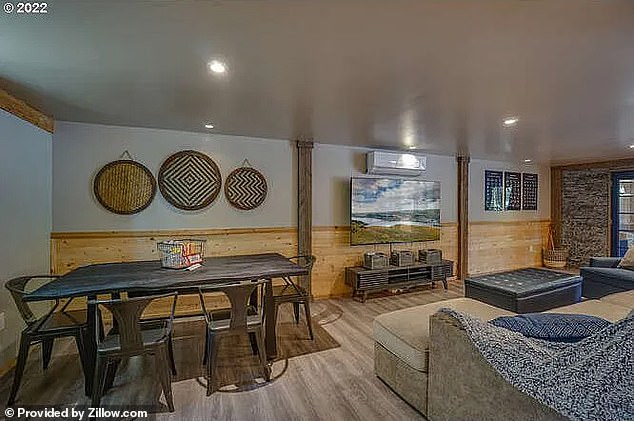 ‘We have a 75′ TV where you can watch those movies and then look out the window and actually see dinosaurs while you’re watching the movie in real life,’ said Todd

The inspired decorations include a magnifying glass, his iconic hat and paleontology tools like picks and axes.

‘Those little details for me is what kind of ties it all together,’ Todd said, although he notes the home was simply a tribute to the science fiction film and did not contain any exact replicas.

‘We have a 75′ TV where you can watch those movies and then look out the window and actually see dinosaurs while you’re watching the movie in real life,’ said Todd to KGW.

Todd and his wife don’t live in prehistoric times permanently but in another home 200 miles east in Pasco with their 11-year-old son and 14-year-old daughter.

He explained to DailyMail.com his reasons for selling-up: ‘I really enjoy the creative process of different projects/businesses. Having an idea and making it a reality is very exciting. I have a couple of new ideas bouncing around my head right now that I may want to pursue.

‘The Jurassic Retreat is an amazing place and was super fun creating. I’m happy that our family and hundreds of other families have been able to experience the property this year as well. Hopefully the new owners will continue to operate the place as a short term rental property for years to come.’ 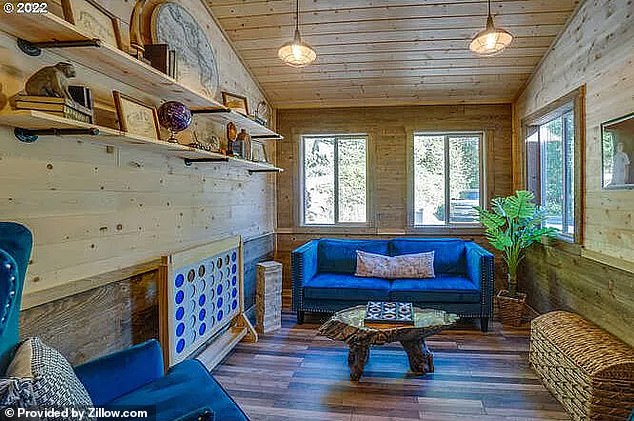 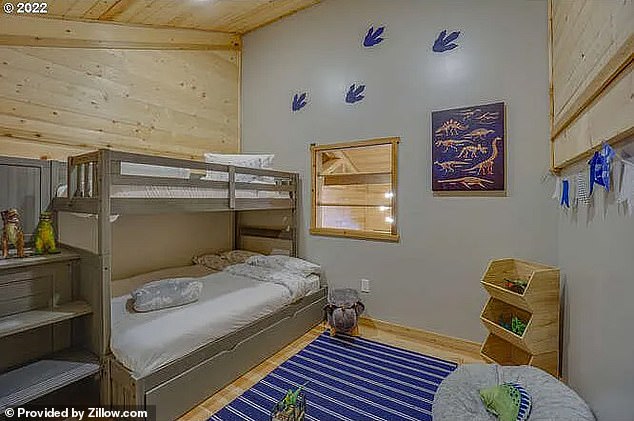 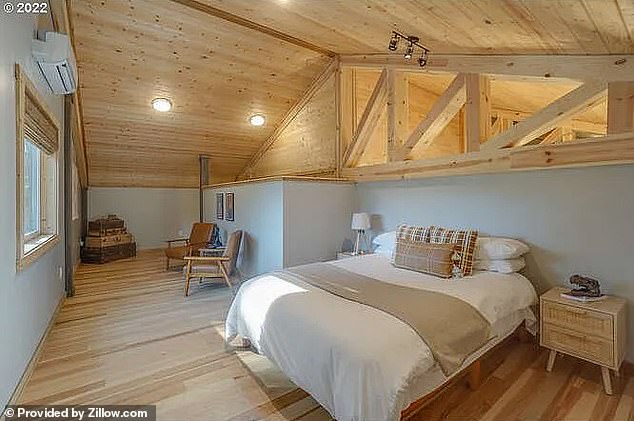 The home has three bedrooms and two bathrooms 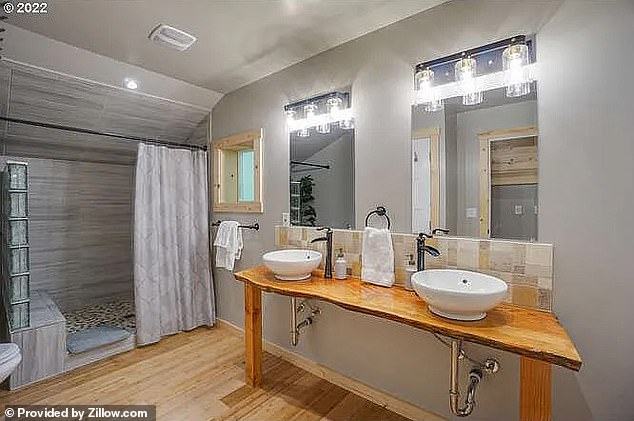 One of the two bathrooms is pictured here. This one has dual sinks