Colombia's marshlands have been home to the giant mammals since they were illegally imported in the late '80s by the drug lord Pablo Escobar.

When he was shot dead in 1993, the government took control of his extravagant estate, including his personal zoo.

Most of the animals were shipped away, but four hippos were left to fend for themselves in a pond, and now there are dozens living in the wild. Estimates put the total number between 80 and 100. Scientists forecast that will swell to almost 1,500 by 2040. 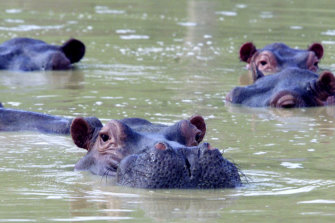 Columbia’s hippopotamus population is expected to rise to 1,500 without dramatic intervention. Credit:Reuters

They conclude that by then, environmental impacts will be irreversible and numbers impossible to control. "Nobody likes the idea of shooting a hippo, but we have to accept that no other strategy is going to work," ecologist Nataly Castelblanco-Martínez told the London Telegraph.

In their natural African habitat, hippos spend the long dry season competing for access to rivers that have shrunk to puddles. They are also vulnerable to disease and predators. In Colombia, it rains regularly and there are no problems with food or predators. Researchers believe this could have made the hippos more fertile. Locals see them as an unofficial mascot. Gift shops in the town of Puerto Triunfo sell hippo souvenirs. And there are warning signs on roads. At the amusement park built on the site of Escobar's former mansion, visitors can see the lake where several dozen hippos now live. 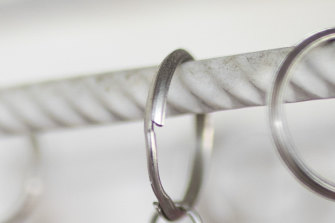 Hippo key rings are displayed for sale at a souvenir shop near the Napoles Park in Puerto Triunfo, Colombia.Credit:AP

But they pose an ecological menace, competing with native wildlife and polluting local waterways. Hippos' waste is toxic, and they carry dangerous bacteria, which can harm other species, including humans. In Africa, hippos are considered a major threat to rural communities, killing more people annually than any other African mammal. In Colombia, there are anecdotes of hippos chasing people after unexpected encounters.

Last year, a Colombian cattle farmer was caught unawares while collecting water. The hippo bit his leg and threw him into the air, breaking his leg, hip and ribs.

Environmentalists have long been trying to sterilise the hippos, but it can take three months to track an individual animal and the procedure is not easy. Male hippos have retractable testes and the females' reproductive organs are even harder to find, according to scientists. David Echeverri Lopez, a government environmentalist, said: "We tried to sterilise females on several occasions, and were always unsuccessful."

Scientists have estimated that the hippo population is growing by 10 per cent annually.

Just, scientists, shoot, Them, Wa
You may also like:

Major, 40, is dismissed from the Army