‘I’m waiting for JVT to say ‘Dealing with Covid is like making love to a beautiful woman’!’: Jonathan Van-Tam startles viewers by ripping off his shirt and tie at start of BBC Christmas lecture

England’s deputy chief medical officer has enjoyed soaring popularity since the start of the pandemic, quickly becoming known for delivering his public health announcements with humour and colourful similies.

Professor Van-Tam was last night hosting the Royal Institution Christmas Lectures on BBC Four, in which he, alongside other experts, dived into the microworld of viruses.

At the start of the show, he was seen dressed in a smart black suit, white shirt and black tie, standing behind a lectern daubed with the familiar message of ‘Stay Alert, Control The Virus, Save Lives’.

He told viewers: ‘Good evening, I’m Professor Jonathan Van-Tam, deputy chief medical officer for England. Many of you may have seen me giving public health announcements from the podium at No10 Downing Street. But tonight is different!’

The professor then proceeded to rip off his shirt and tie, disappearing into a cloud of smoke – before remerging in slightly less formal attire, wearing a more casual blue shirt underneath his jacket.

Pointing to the camera, he then said: ‘Tonight I’m speaking to you as a scientist and a doctor, not a government adviser. Welcome to the Royal Institution Christmas Lectures. Tonight, we’re going viral!’ 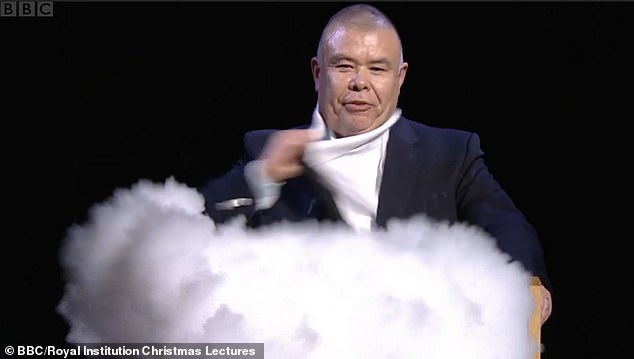 The professor proceeded to rip off his shirt and tie, disappearing into a cloud of smoke 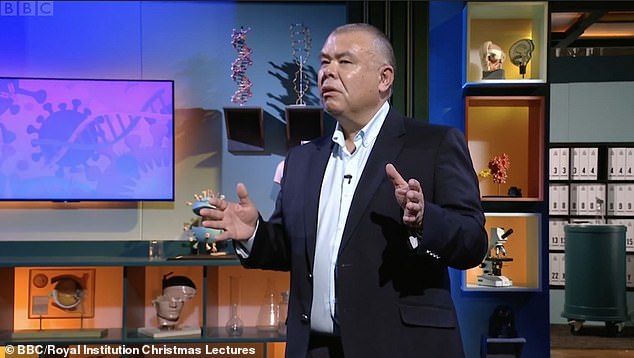 He then remerged in slightly less formal attire, wearing a more casual blue one underneath his jacket 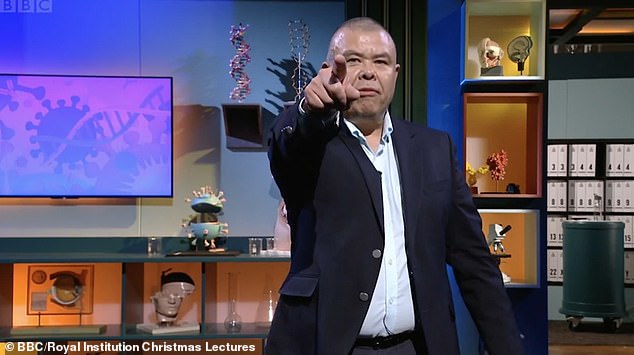 Pointing to the camera, he then said: ‘Tonight I’m speaking to you as a scientist and a doctor, not a government adviser. Welcome to the Royal Institution Christmas Lectures. Tonight, we’re going viral!’

But many others hailed the professor for clearly explaining the ins and outs of a complicated topic in an entertaining fashion.

One wrote: ‘I’m waiting for the similie loving JVT to say ‘dealing with Covid is very much like making love to a beautiful woman’.

Another suggested: ‘The best thing that could come out of the pandemic at this point is JVT hosting his own daytime quiz show called ‘Viral’.’

A third said: ‘Watching the first #RoyalInstitutionChristmasLecture. Absolutely amazing. I have SUCH a crush on Jonathan Van-Tam.’

The Royal Institution itself added: ‘It’s a bird! It’s a plane! No, it’s JVT! A very warm welcome to our 2021 Christmas Lecturer. We are very excited to begin this journey together, learning about how viruses work, how they spread and what we can do to fight them.’

The episode saw Professor Van-Tam explain how viruses can infect our bodies and how a revolution in testing may transform medicine forever. 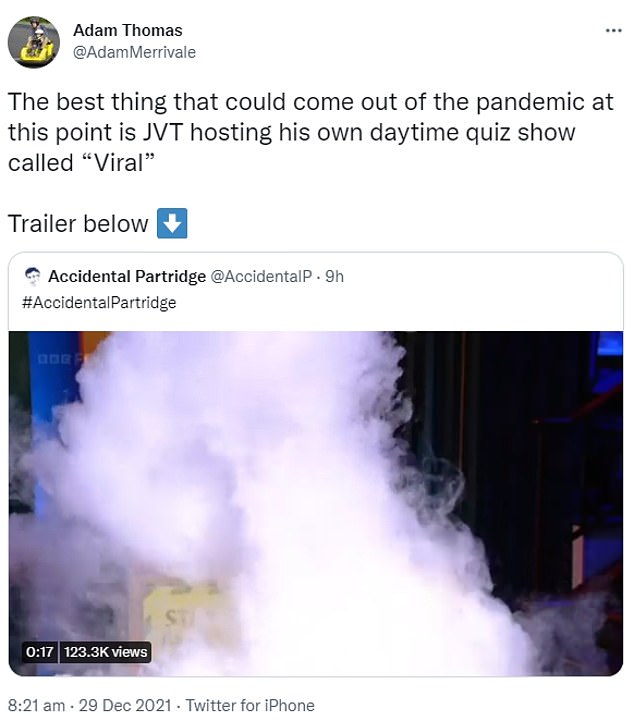 Alongside immunologist Professor Katie Ewer and virologist Professor Ravi Gupta, the lecture revealed the inner workings of the virus by blowing it up and invited the audience to take part in a heist mission.

The experts also dived into a nose to uncover the wonders of snot and looked at testing – peeling back the mysteries of PCR, hacking into a super-sized lateral flow and showing how modern diagnostic technology could shape the future of medicine.

The Christmas Lectures are the most prestigious event in the Royal Institution’s calendar, dating from 1825 when Michael Faraday founded the series.

They are the world’s longest-running science television series and aim to inspire and amaze each year through explosive demonstrations and interactive experiments with a live theatre audience.