Biden vows retaliation for the attack

Speaking at the White House for the first time since the attacks, US President Joe Biden, vowed retaliation.

“We will not forgive,” he said. Will not forget. We will hunt you down and make you pay.” 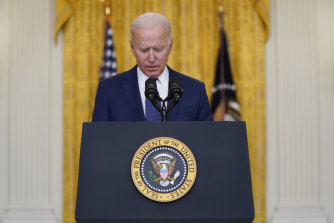 US President Joe Biden condemned the attacks that killed 12 US Marines. Credit:AP

“I will defend our interest and our people with every measure at my command.”

He said the 12 troops who died were “heroes” who had participated in a “dangerous, selfless mission to save the lives of others”.

Biden, addressed media after the deadly blast outside of the Kabul airport, said the situation is still in flux.

“The situation on the ground is still evolving and I’m constantly being updated,” he said.

“These American service members who gave their lives – that is an overused word but it is totally appropriate here – were heroes, heroes who have been engaged in a dangerous selfless mission to save the lives of others.”

US President Joe Biden condemned the attack in a televised address and has vowed to make the perpetrators pay for the suicide attack.

No Australian soldiers or officials have been injured in the blast that has claimed at least 12 US service members’ lives.

The Australian military’s Joint Operation Command earlier said it was “aware of reports of an explosion at Kabul Airport”.

“All ADF personnel supporting the Afghanistan evacuation are safe,” the JOC said on Twitter.

Defence Minister Peter Dutton confirmed Australia managed to get all of its troops out of Afghanistan before the bomb attack.

“Our troops will be devastated by the loss of their comrades,” he told Channel Nine’s Today show.

Dutton said there was “clear intelligence” that Islamic State’s local affiliate was planning a terror attack in the lead-up to Thursday night.

It is now highly unlikely Australia will operate any more rescue flights before the August 31 deadline the Taliban set to end evacuations.

Welcome to our live coverage of the overnight terrorist attacks in Kabul.

Here’s a summary of what we know so far:

attack, Doz, Kabul, LIVE, Updates
You may also like: