Putin’s Chechen warlord stooge claims he is sending his three sons, 14, 15 and 16 to fight in Ukraine as he posts video of them ‘showing their skills’ with machine guns and tanks

Chechen leader Ramzan Kadyrov has claimed he will send three teenage sons – aged 14, 15 and 16 – to the frontlines in Ukraine.

A close ally of Russian president Vladimir Putin, Kadyrov has been one of the most vocal advocates for increased military action in Ukraine and his troops have a reputation for being particularly brutal.

‘It’s time to prove themselves in a real fight, I can only welcome this desire,’ Kadyrov wrote on Telegram, posting a video of the young boys firing missiles in a shooting range.

‘Soon they will go to the front line and will be on the most difficult sections of the contact line.’

He added that Akhmat, 16, Eli, 15, and Adam, 14, have been trained for combat ‘almost from their youngest years’ and insisted he was ‘not joking.’

The video showed the boys in camouflage clothing and dark glasses, on tanks, guns strapped to their waists, shooting rocket launchers and machine guns.

The post came as the Kremlin today dismissed statements made by Kadyrov on Sunday in which he called on Putin to deploy low-yield nuclear weapons in Ukraine amid Russia’s ailing military campaign. 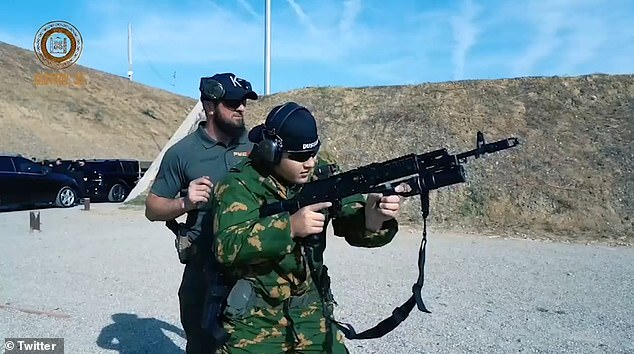 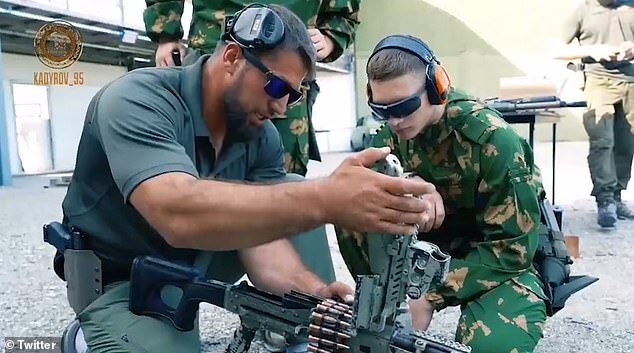 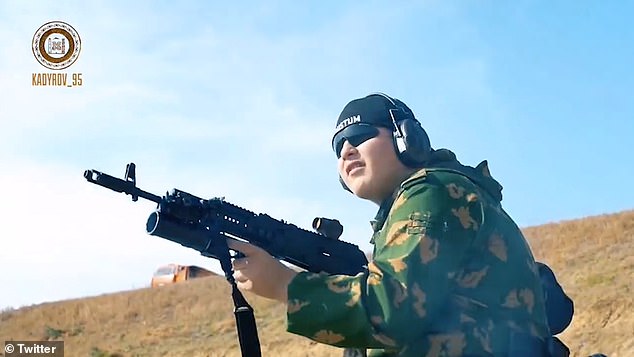 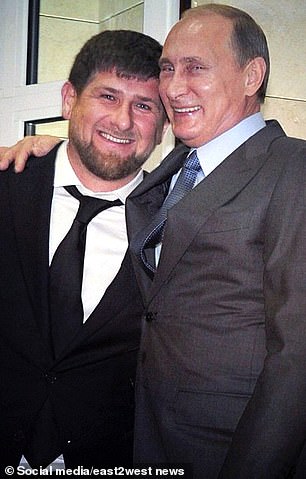 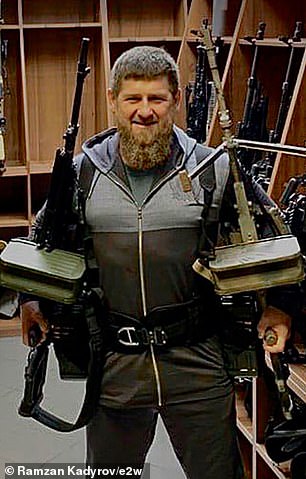 Kadyrov, a former warlord who leads the Muslim-majority Chechnya republic, has been one of Russia’s most vocal supporters of Putin’s Ukraine offensive (Kadryov pictured left with Putin) 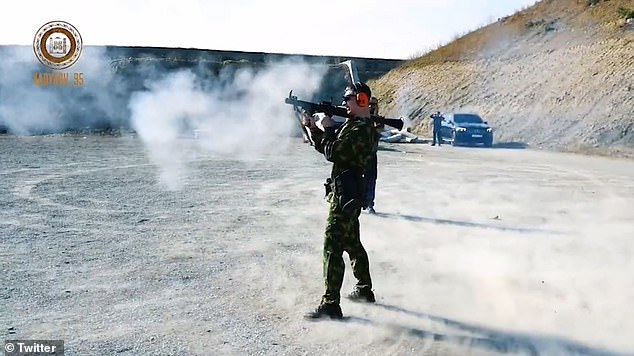 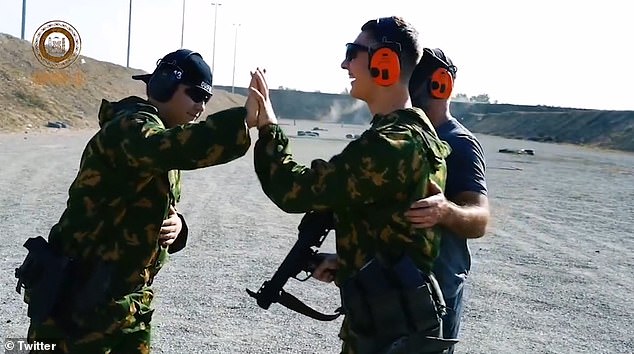 Kadyrov, a former warlord who leads the Muslim-majority Chechnya republic, has been one of Russia’s most vocal supporters of Putin’s Ukraine offensive.

He was slotted into power by Putin in 2007 to exert control over the region which had fought bloody wars for independence from Moscow throughout the 1990s and early 2000s.

Since Russian tanks rolled across the border on February 24, the Chechen leader has consistently called on Russia’s defence ministry to commit additional forces to the conflict and has called on fighting age men in Chechnya to volunteer to go to fight for Russian interests in Ukraine.

Kadyrov has also earned a reputation for forcing his sons to face adversity from an early age.

In 2016 he entered them – then aged 10, 9 and 8 – in a full contact mixed martial arts bout. Footage of the fights went viral and prompted widespread criticism, including from Russian MMA legend Fedor Emelianenko.

The Chechen leader made more headlines over the weekend when he called on Putin to deploy ‘low-yield nuclear weapons’ in Ukraine amid the latest spate of Russian defeats.

‘I do not know what the Defence Ministry reports to the Supreme Commander-in-Chief [Putin], but in my personal opinion, we need to take more drastic measures, up to the declaration of martial law in the border areas and use of low-yield nuclear weapons,’ he said.

Kadyrov complained that Putin’s commanders had failed to rout Ukraine’s supposed ‘Satanists and fascists’, and made no bones about his desire for nuclear weapons to be detonated on Ukrainian soil.

He also criticised Colonel-General Alexander Lapin, who is in charge of Russia’s forces fighting in the region, calling him ‘mediocre’. 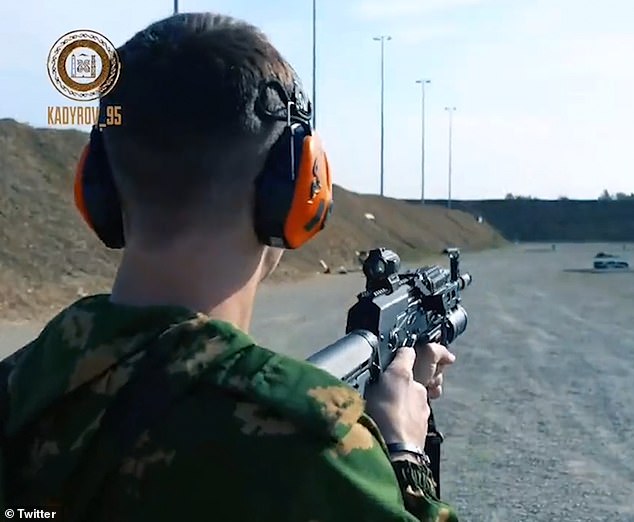 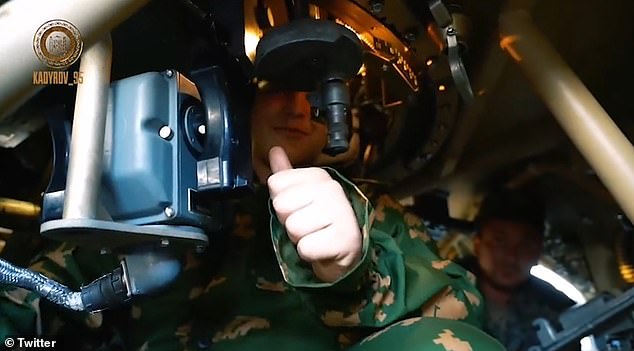 Images taken from the video posted by Kadyrov showed the children smiling, high-fiving and given thumbs up to the camera 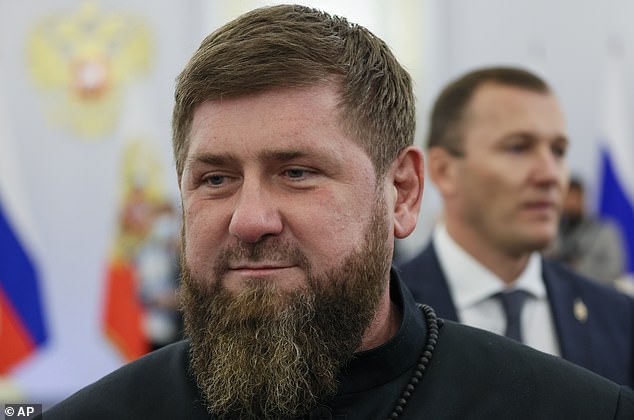 Chechnya’s regional leader Ramzan Kadyrov arrives to attend a ceremony to sign the treaties for four regions of Ukraine to join Russia, at the Kremlin in Moscow, Friday, Sept. 30, 2022 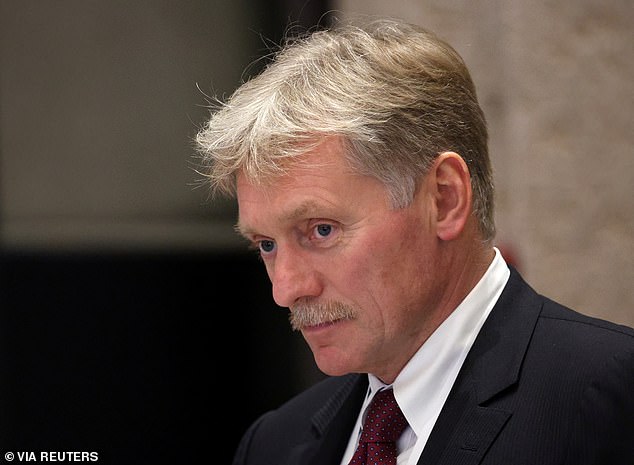 ‘This is a very emotional moment. The heads of regions have the right to express their point of view,’ Peskov said in a call with reporters on Monday.

‘But even in difficult moments, emotions should be kept out of any kind of assessment. So we prefer to stick to balanced, objective assessments.

‘In our country, the use of nuclear weapons happens only on the basis of what is stated in the relevant doctrine.’

The Kremlin mouthpiece nevertheless hailed the ‘heroic contributions’ of the Chechen leader to the military operation in Ukraine.

Last month, Putin warned the West he was ‘not bluffing’ when he said Russia was prepared to use nuclear weapons to protect its territory.

On Friday he said the United States had created a ‘precedent’ by dropping nuclear bombs on Japan at the end of World War Two.