He aims to please.

Game wardens with KDWPT first learned of the tangled deer last Thursday, after a concerned bowhunter in Jackson County alerted the department of their “unfortunate entanglement,” the wardens wrote on Facebook.

The wardens responded to find the bucks struggling to untangle their antlers, but they refrained from approaching, as the animals were still thrashing about in a creek.

Instead, the men came up with a riskier — but ultimately successful — idea.

As seen in the footage, one of the wardens gets close enough to throw a blanket over the heads of the deer. Once they were calm, he prepared to draw his gun.

“I think I got a good shot at the beam right now,” he says to the other warden.

“Without hitting the head?”

The incredible video then shows the warden — identified as Jeff Clouser by the Kansas City Star — fire his gun at one of the animal’s antlers. The deer then scurry away in opposite directions. 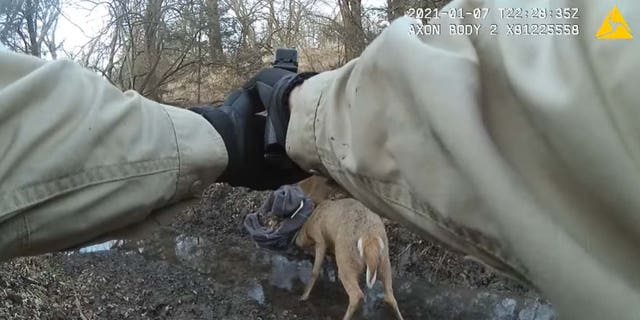 KDWPT wrote on Facebook that the wardens’ actions likely saved the animals from an “excruciating death,” and the department’s followers agreed.

“Thank you for saving these beautiful bucks, living to fight another day!” wrote one commenter on Facebook.

“Perfect patience and shot,” another wrote.

“Give that man a raise!” one declared.

A representative for the KDWPT was not immediately available to offer further comment, but the department issued a quick statement on the wardens’ behalf on social media.

“The Game Wardens would like to thank the bow hunter who reported it and cooperating landowners for their help in preventing [the animals’ deaths] from happening.”

frees, Game, kansas, tangl, Warden:
You may also like: