Labour fears another nightmare at the polls: Keir Starmer faces his first big test as leader after succeeding Jeremy Corbyn… but the Tories are predicting a night of big losses, too

Labour leader Sir Keir Starmer is facing a ‘very difficult’ first electoral test this week ahead of a historic vote that could have major implications for the future of his party.

Shadow Foreign Secretary Lisa Nandy said the party was not expecting miracles on ‘Super Thursday’ – the biggest-ever range of elections to take place on one day in Britain – but insisted that the mood among voters is shifting as the Conservatives become mired in sleaze allegations.

The Tories are also playing down expectations as Boris Johnson’s poll lead narrows after the Mail’s revelations about the redecoration of his Downing Street flat hit home with voters.

Miss Nandy told Sky News yesterday: ‘I think they are really concerned about the way that this Prime Minister carries on and the way in which it seems to be one rule for them and one rule for everybody else, so I think people are starting to think again about Labour.’ 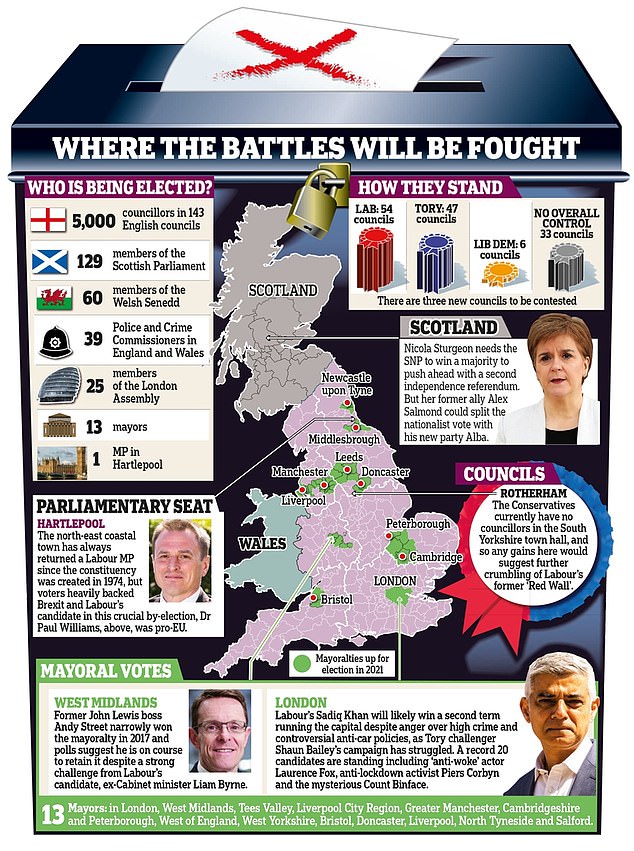 Voters in England, Scotland and Wales will go to the polls on Thursday for contests in the devolved parliaments, regional mayors and local councils, with Labour expecting a ‘very difficult’ night

But she went on: ‘Whether that translates into good results at these local elections, I’m not sure; to be honest, we’ve got a big mountain to climb and it’s going to take time to rebuild that trust.

‘Whether or not we get a good set of results in these local elections, I think they are likely to still be very difficult for us.’

Voters in England, Scotland and Wales will between them choose 5,000 councillors, 39 police tsars, 13 mayors, 189 members of devolved parliaments, and one MP. 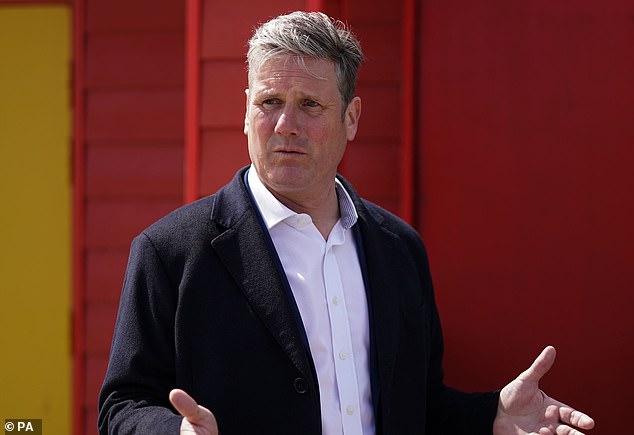 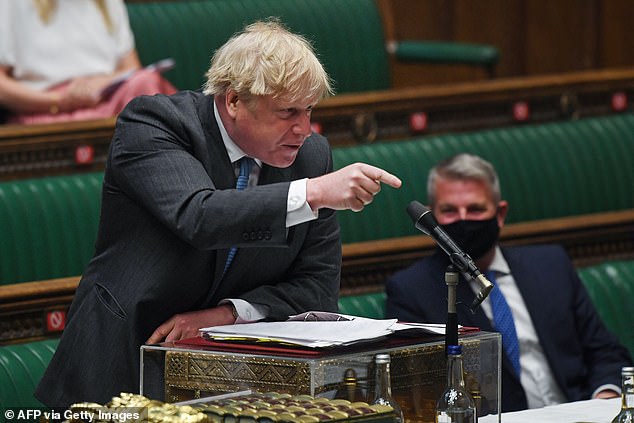 It is the first time that Labour leader Sir Keir’s popularity will be tested at the polls as no elections have been held since he took over from Jeremy Corbyn last April.

The most crucial contest for Labour’s leader is the parliamentary by-election in Hartlepool.

Billion-pound plan to save the union

Billions more pounds will be spent on Scotland by the UK Government in an attempt to further dampen support for independence.

A blueprint to save the union will see huge investment in road and rail links with England and patients waiting for treatment could be seen in NHS hospitals south of the border.

The plans are set to be revealed soon after Thursday’s Scottish Parliament elections to see off demands for a fresh independence referendum.

But polls published at the weekend suggest the SNP is unlikely to win a large majority, denting its mandate for a referendum.

One by BMG suggested the SNP would take 68 seats with Alex Salmond’s Alba Party getting two and the Greens nine – a total of 79 pro-independence MSPs out of 129.

Panelbase for the Sunday Times indicated the SNP may get 65 seats – a majority of one – with the Tories on 28 and Labour on 18.

It is a seat the party has held since it was formed in 1974 but the North East town voted heavily in favour of Brexit and Labour’s new candidate Dr Paul Williams is pro-EU.

If the Tories win in Hartlepool it would show that the party is continuing to become estranged from its heartlands and strengthen the Conservatives’ hold over former ‘Red Wall’ seats in northern England.

The other two big contests are the West Midlands and Tees Valley mayoralties, which were narrowly won by Conservatives last time.

Experts believe Labour will struggle to wrestle these from two popular Conservative incumbents.

Sir Keir personally has struggled on the campaign trail.

He was thrown out of a pub by an angry landlord in Bath and his stunt of going shopping in John Lewis to mock the Prime Minister’s redecoration of Downing Street backfired.

A video in which a young man posed for a photo with the Labour leader – then declared ‘Vote Conservative’ – went viral.

However, the Tories are expecting heavy losses in English council seats and stand no chance of winning the London mayoral contest.

A Focaldata poll of voters in northern ‘Red Wall’ seats put the Tories one point behind Labour, 44 to 45.

And an Opinium survey found their lead had been slashed from 11 points to five in a week, with the Tories falling two points to 42 while Labour rose four to 37.

a, facing, Keir, Starmer, VE
You may also like: