Keir Starmer is accused of piling pressure on police

In a high-stakes gamble, the Labour leader said he would ‘do the right thing and step down’ if Durham Constabulary fined him over his lockdown beer with aides.

But his opponents said this had placed detectives in the difficult position of knowing their decisions could decapitate the official opposition and leave Labour looking for new leadership.

Sir Keir’s deputy, Angela Rayner, also said she would quit if she was fined over her role in the ‘Beergate’ event in Durham on April 30 last year when all indoor socialising was banned.

After a day of crisis meetings with advisers, Sir Keir gave a brief statement yesterday in which he repeatedly stated that ‘no laws were broken’ and claimed that the allegations against him were politically motivated.

However, the former director of public prosecutions confirmed he would quit if sanctioned over the event, saying: ‘If the police decide to issue me with a fixed penalty notice I would of course do the right thing and step down.’ 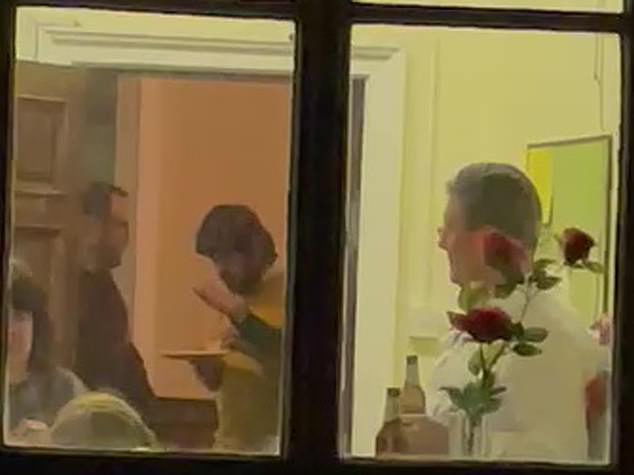 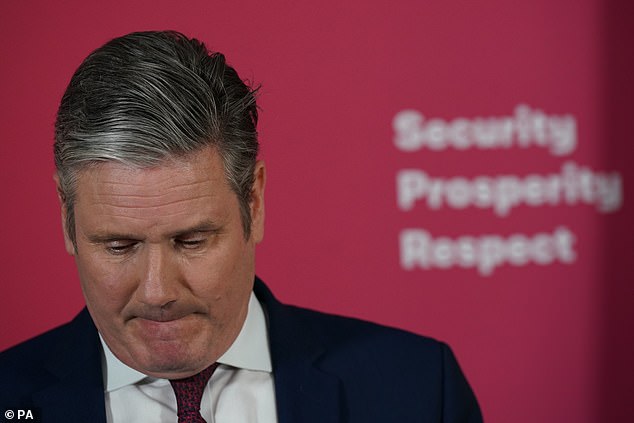 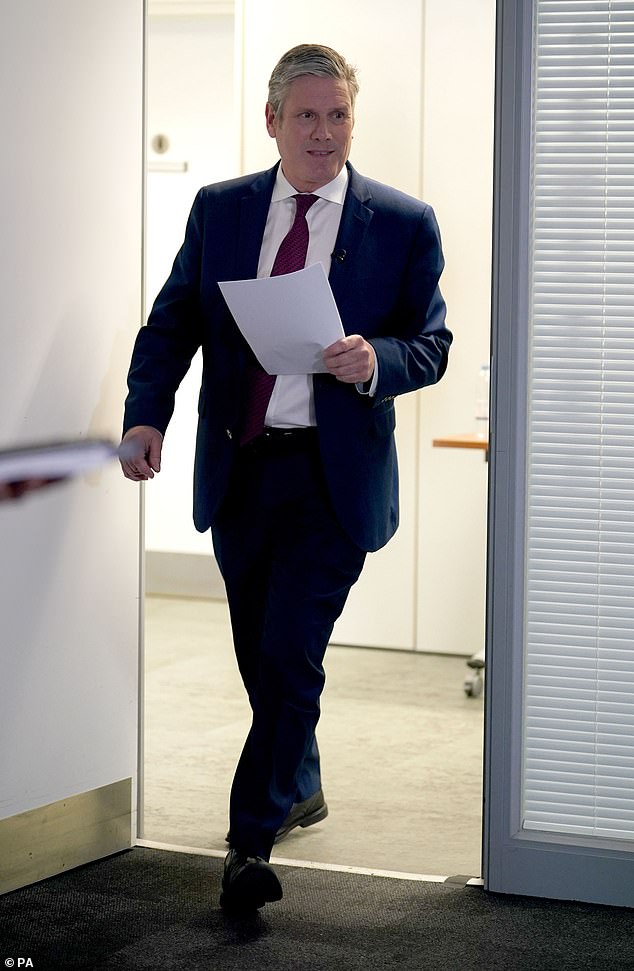 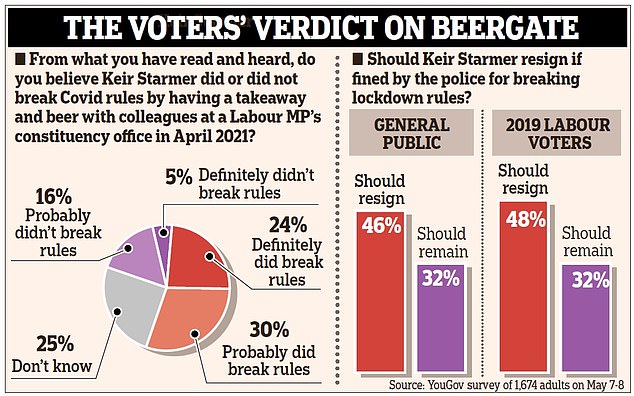 The Labour leader’s Shadow Cabinet immediately took to social media last night to proclaim him as a man of ‘honesty’ and ‘integrity’.

And Sir Keir appeared to give himself a loophole for avoiding resignation by fudging questions over whether he would still quit if Durham police found he did breach lockdown laws but stuck to its policy of not issuing Covid fines retrospectively.

He also dodged questions over why the launch of the police probe was not enough on its own to trigger his resignation when he had explicitly called for Boris Johnson to quit at the start of the Scotland Yard inquiry into Partygate.

A Government source said ministers were concerned that Sir Keir’s intervention could place ‘undue pressure’ on Durham Constabulary to clear Sir Keir, or at least refrain from fining him.

Digital minister Chris Philp hinted at the unease last night saying it was ‘deeply inappropriate that Sir Keir appeared to be attempting to pressure the police into clearing him’.

Barrister Francis Hoar also criticised the move, saying that ‘to undermine the presumption of innocence and put the police under pressure is wrong. A former DPP should know that’.

Sir Keir’s move echoes an intervention by Tony Blair, who is reported to have warned the police he would have to resign if he was interviewed under caution over the ‘cash for honours’ scandal, causing the officers to back off.

One ally of Sir Keir last night acknowledged that the move ‘puts some pressure on Durham police’ but insisted it only balanced out pressure from the Conservatives to investigate the matter.

As potential leadership hopefuls were warned they may need to be ready to launch their campaigns in weeks: 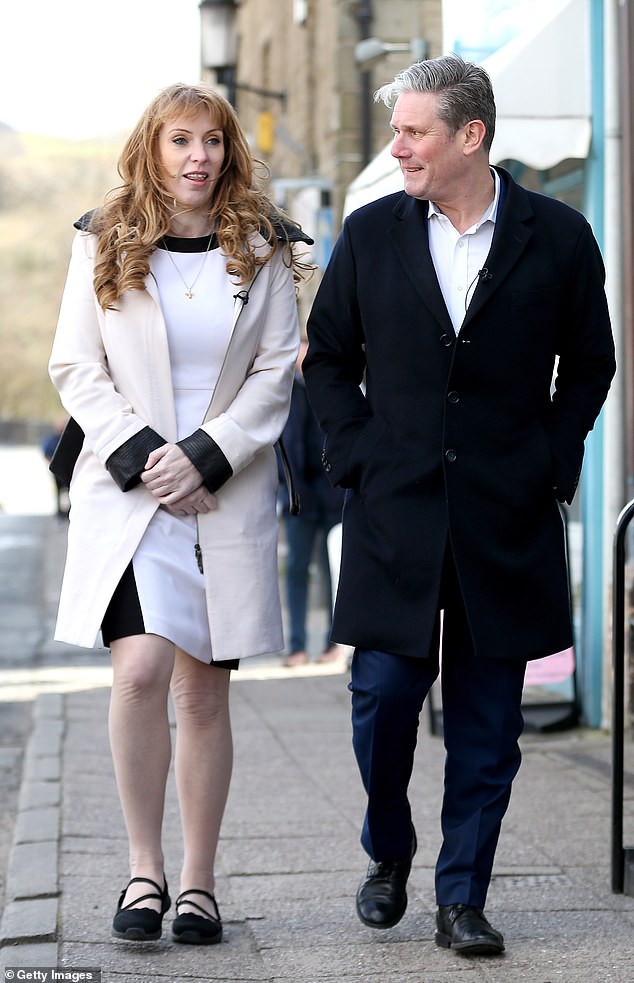 Sir Keir – who faces a full-blown investigation by Durham Police – pulled out of an Institute for Government event today, where he was expected to take questions. Labour declined to say why he had withdrawn 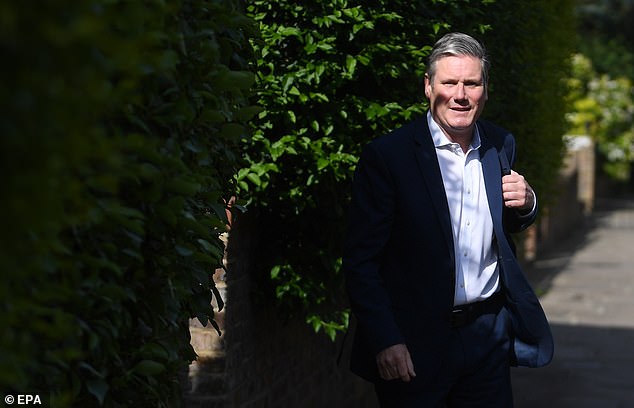 Durham Constabulary announced on Friday that it was launching a fresh probe into Beergate after receiving ‘significant new information’.

The move followed a string of revelations in the Mail about what really happened when Sir Keir gathered with MPs and officials in Durham Miners Hall in the run-up to last year’s local elections.

This newspaper revealed that, despite denials stretching back three months, Mrs Rayner was also present, along with Durham MP Mary Foy.

It has also emerged that the group, which may have comprised up to 30 people, shared £200 of curry when buffet-style meals were banned.

And Labour has failed to produce any evidence that Sir Keir and others continued to work after the curry gathering at 10pm on a Friday.

A source at the meeting has said no work was done afterwards, and that some of those present were ‘getting p*****’ – a claim denied by Mrs Foy.

Labour strategists believe that if Sir Keir is cleared it will pile pressure on the Prime Minister to resign over his own Partygate fine.

Mr McDonnell said that Sir Keir would have no choice but to go if there was a finding of fault.

The former shadow chancellor questioned why it had taken the leader days to decide on what he now says is a matter of principle.

A YouGov survey found that the public believe by a margin of 46:32 that Sir Keir should quit if fined and 54 per cent think he probably or definitely broke the rules.

Keir Starmer says it will be up to the police to determine whether he should be fined. But the former director of public prosecutions also stated his own view that ‘no laws were broken’.

Privately, some advisers believe his gambit will pile pressure on Durham Constabulary to clear him.

One ally of Sir Keir suggested it ‘puts some pressure on Durham police who are being leant on in one direction’.

The Labour leader made much of his pledge to quit if he was fined, saying: ‘If the police decide to issue me with a fixed penalty notice, I would of course do the right thing and resign.’

But he fudged questions about whether he would resign if Durham police found he did breach lockdown laws but stuck to their policy of not issuing Covid fines retrospectively.

Sir Keir initially said that ‘if you’ve made a law you should respect the law, and if you’re found to be in breach of it you should step down’.

But pressed on the issue he backtracked, suggesting he would resign only if fined.

A man of honour?

The statement was strong on self-righteousness, with Sir Keir declaring: ‘I believe in honour, integrity and the principle that those who make the laws must follow them.

This is a matter of principle and honour for me. It’s about who I am, what I stand for.’

What Sir Keir did not say was that he and his team had given out false statements about the evening when he was filmed enjoying a beer with activists, including claiming that deputy leader Angela Rayner was not present.

And they have failed to provide evidence of other claims, such as what work was done after the 10pm event.

Why he hasn’t quit

SIR Keir was quick out of the blocks in demanding that Boris Johnson resign over Partygate, calling for the PM to go as soon as Scotland Yard launched its investigation in January.

He tweeted: ‘Honesty and decency matter.  After months of denials, the Prime Minister is now under criminal investigation for breaking his own lockdown laws.

‘He needs to do the decent thing and resign.’

Sir Keir was asked twice yesterday why the launch of the Durham police probe did not trigger his own resignation, but dodged the question each time.

By Glen Keogh for The Daily Mail

Labour staff at the Beergate event being probed by police were drunk and did no work after a curry was ordered, it was claimed yesterday.

Hours before Sir Keir Starmer announced he would step down if fined over the alleged Covid breach, it was suggested the junior staff were ‘p***** and obviously not working’.

The claims could throw the Labour leader’s defence of the evening into disarray given he has consistently claimed that the meal was part of a work event and work continued afterwards.

It can also be revealed that, despite a leaked memo urging Labour delegates to maintain social distancing at all times, Sir Keir, Durham MP Mary Foy and other attendees were filmed drinking in a kitchen measuring just 6.5ft by 16ft.

Social distancing would have been impossible in a room so small it was described as a ‘store’ on floor plans.

Recounting what happened during the evening at Durham Miners Hall on April 30 last year, one source familiar with the event said that it ‘crossed the line’ and broke the Covid rules in place at the time. 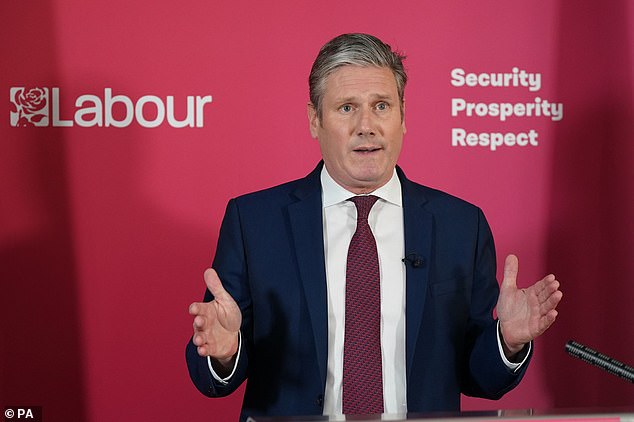 Junior staffers ‘were p***** and obviously weren’t working so I remember thinking, why are they here?’ the insider told news site Politico.

They added: ‘It was Friday night after nine o’clock and some people were drinking. Of course it crossed the line.’

The source said the plan was to have a ‘working dinner’ with Sir Keir where he and around 15 other people would have a curry while on a Zoom call with Labour activists. But the curry is said to have arrived late, after the Zoom call and work was finished.

A message was, however, posted from Sir Keir’s Twitter account at 10.13pm on the night in question, urging people in Hull to vote Labour after he spent the previous day campaigning in the city. It was also posted on Facebook three minutes later.

The post could be said to back up Sir Keir’s assertion that he had continued working if police conclude that the posting of a tweet constituted work.

Labour was asked whether Sir Keir posted his own messages on Twitter and Facebook but did not respond.

But the source, who said they would be willing to help any police investigation, told Politico: ‘There was no work being done. There just wasn’t.

‘The Zoom events had finished. If the curry was on time during the Zoom call it wouldn’t have been a breach. 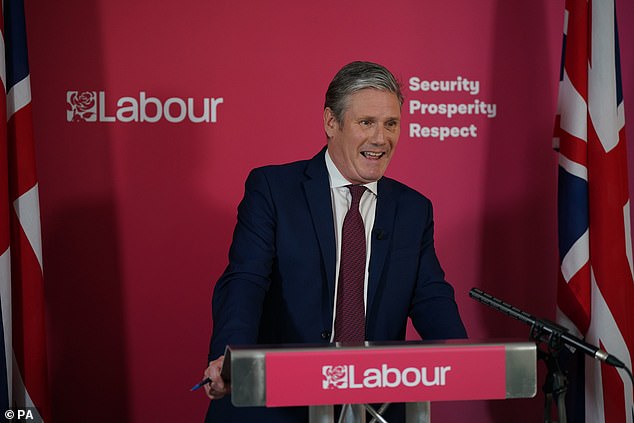 ‘But it was late and work had finished. It wasn’t work and there was no work afterwards that I’m aware of.’

Labour figures in Durham have defended Sir Keir, but also agree that he has to go if he is found to have broken the rules.

David Toner, treasurer of the North West Durham Labour Party, said: ‘If he is found guilty of a crime then of course that has serious repercussions.

‘The incident was completely different to Downing Street parties. You can see that it was a work event.’

Over the weekend, an attendee claimed that some others, including Mrs Foy and her staff, had turned up solely to socialise.

‘They were just there drinking. This made some people feel uncomfortable because they knew there was a risk we could be accused of breaking the rules,’ they told The Sunday Times.

‘It’s not something that I am prepared to defend. They just thought it was pretty cool to hang out with the leader and deputy leader of the Labour Party.

‘I wouldn’t say they were hammered but they were definitely a little bit tipsy by the end.’

The Mail on Sunday also reported that the dinner was planned and deputy leader Angela Rayner was always expected to be in attendance.

Labour initially denied that she had been present but was forced to admit she was when presented with evidence by The Daily Mail. A spokesman said it had been an ‘honest mistake’.

A Labour Party spokesman said: ‘Keir was working, a takeaway was made available in the kitchen and he ate between work demands. No rules were broken.’