‘You can’t vote for another party and get a Labour government’: Keir Starmer rules out coalition deal with Nicola Sturgeon’s SNP to hand him the keys to No10

The Labour leader used an interview ahead of a visit to Scotland to bluntly reject any link-up with the nationalists.

The SNP is the third largest party at Westminster with 45 MPs but they would almost certainly demand a new independence referendum as the cost of an alliance.

Mr Starmer used an interview with the Daily Record to rule out what proponents have called a ‘progressive alliance’ at the next election to try to unseat the Conservatives.

He said: ‘The questions going into that election are going to be generational questions – how do we ensure that as we come out of the pandemic we deal with the fundamental weaknesses that lead us with the highest death toll and the biggest impact of any major economy? And secondly, how do we meet the climate emergency?’ 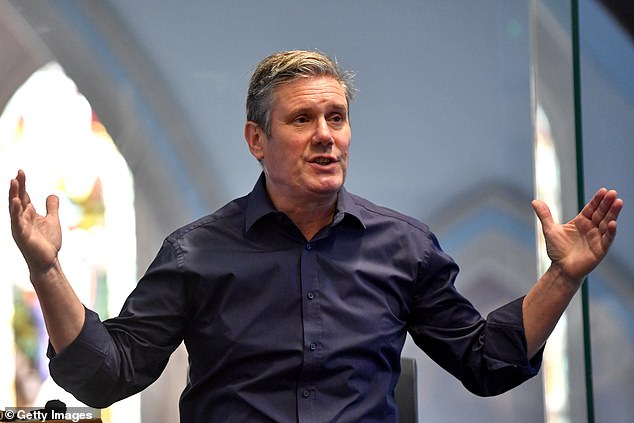 The Labour leader used an interview ahead of a visit to Scotland to bluntly reject any link-up with the nationalists.

Labour was once the major electoral power in Scotland, but it has constantly lost ground in the 21st century and currently holds just one seat after the disastrous 2019 election.

Sir Keir admitted he would be prepared to talk to Ms Sturgeon, but only about issues like climate change.

He argued the focus should be on the recovery from the coronavirus pandemic and climate change rather than Scottish independence, ahead of his two-day visit to Scotland.

He said he will happily sit down with the First Minister prior to November’s climate change summit in Glasgow ‘because leadership going into Cop26 requires that kind of diplomacy’.

Asked about whether there could be any arrangement with the SNP before or after the next general election, Sir Keir said: ‘Look, I will meet Nicola Sturgeon if she wants to talk through the challenges of the day.

‘But on the constitution, going into the Scottish election and since the election, we’ve been clear the focus is on the recovery and on the climate challenge.

‘We haven’t finished dealing with this pandemic. Many times in the last 12 months we’ve thought we’re coming out of it, only to find that there are rises in infections.

‘We’ve got to finish rolling out the vaccinations and then look to the recovery side. So any conversation has to start there, not on the constitutional issue.’

coaliti, Keir, out, Rules, Starmer
You may also like: