Kenyan nurse in Canada drowns while live streaming herself from pool

Horrifying moment Kenyan nurse living in Canada DROWNS while live streaming herself in a swimming pool: Father sobs as he pleads for donations to fly her body home for burial

A Kenyan nurse living in Canada drowned in a motel swimming pool while live streaming the horrifying moment on Facebook, as her father pleads for donations to fly her body home for burial.

Hellen Wendy Nyabuto, 24, could be seen diving into the deep end of a pool at the Key Motel in Chastworth, Ontario, where she was staying as a guest, on Thursday evening. She could be seen struggling to float above the water after diving in from the shallow end, footage of the moment on social media shows.

The young woman, who was a health worker living in Toronto, had been responding to comments from her friends and followers on the live stream just seconds before going back into the water.

Her body was discovered at the bottom of the pool later in the day after two men had mistaken her for a poodle, due to her long, curly hair and multicolored one- piece, according to the Kenyan newspaper The Star.

‘I’m not getting in that pool. It looks like an actual dead person,’ one of the two men can be heard saying in the Facebook live stream. The residents called the front desk before Ontario Provincial Police were notified of the incident.

The victim was in Chatsworth because she worked at Country Lane, a nursing home providing long-term care, The Toronto Star reported.

‘She worked with seniors right until the end,’ Alfonce Nyamwaya, one of Helen’s close friends, told the Canadian outlet, emphasizing that she one of the many health workers who had been working long hours in long-term-care homes during COVID.

‘She really had a passion for that,’ he added. 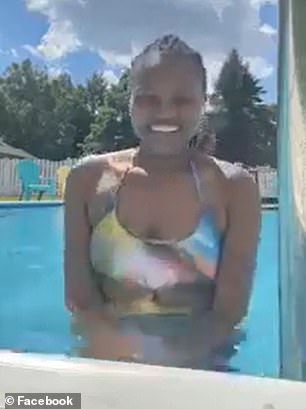 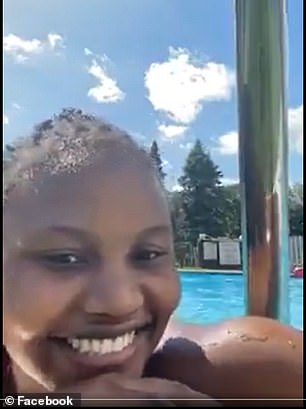 Hellen Wendy Nyabuto, 24, drowned in a residential swimming pool in Collingwood, Ontario, Canada, where she was working as a health worker while live streaming herself on Facebook last Thursday 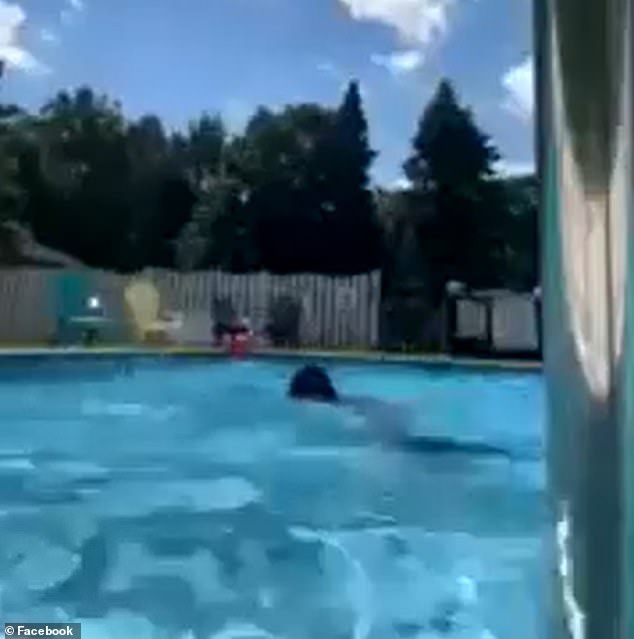 Hellen had been recording herself for almost ten minutes when she dove in the deep end of the pool before gasping for air, screaming for help and kicking both her arms and legs before she was found three hours later at the bottom of the pool

The Nyabuto family told CNN that Hellen was sharing an apartment in Toronto with her little brother and that she was studying nursing while working part-time.

‘She has been in Canada for about three years,’ added Enock, who comes from a family of six children counting his sister. Hellen had obtained a 10-year visa to pursue her studies in Canada.

Hellen was also the family’s provider after her father, Kyondi Nyabuto, assisting him with funding the education of her siblings back home in Kisii, Kenya.

‘Hellen was the breadwinner back home for her family,’ Nyamawaya told the Toronto Star. ‘She’s been supporting them and it’s left a big gap.’

Furthermore, Hellen had not gone back to Kenya since her arrival on Canadian soil in 2019.

‘She was assisting me financially to educate her siblings, particularly in terms of school fees and other expenses. I’m stuck now and back to square one. I’m wondering how her younger siblings will continue schooling,’ Kiyondi Nyabuto told CNN.

The father-of-six added that claims on social media saying Hellen had planned her death are untrue.

‘I hear some people claiming she had said on WhatsApp that she would soon die in Canada. As her father, she never shared with me any information that suggested she was in distress or any form of trouble,’ Nyabuto told The Standard, Kenya’s largest newspaper.

He further revealed that he only learned about Wendy’s death after receiving a text message from one of Hellen’s friends, notifying him about the drowning.

His daughter was rushed to hospital on Thursday evening and several attempts to revive her were carried out by emergency medical services. 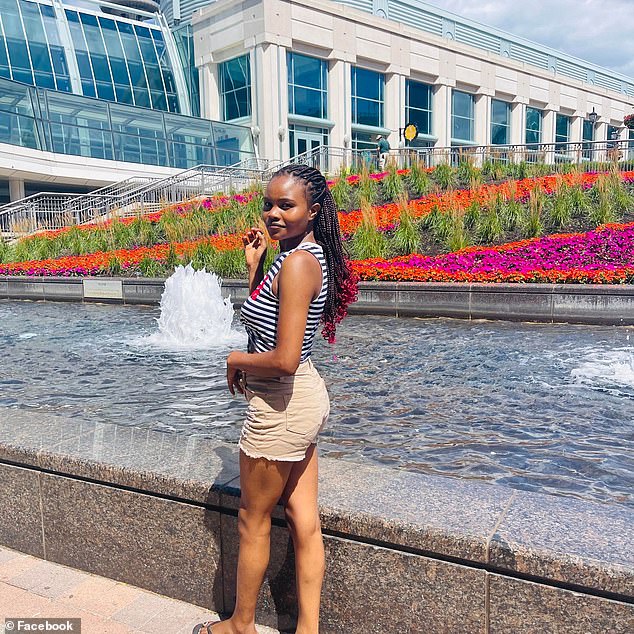 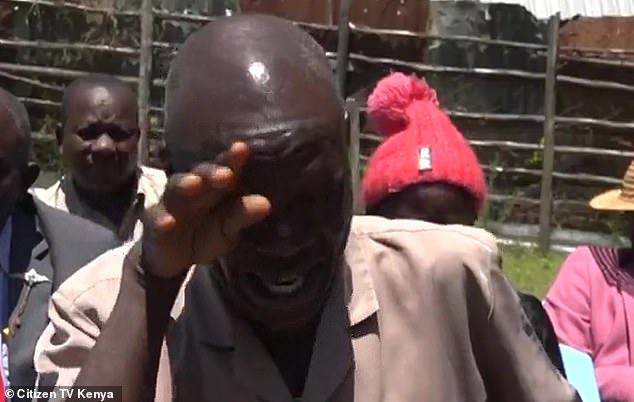 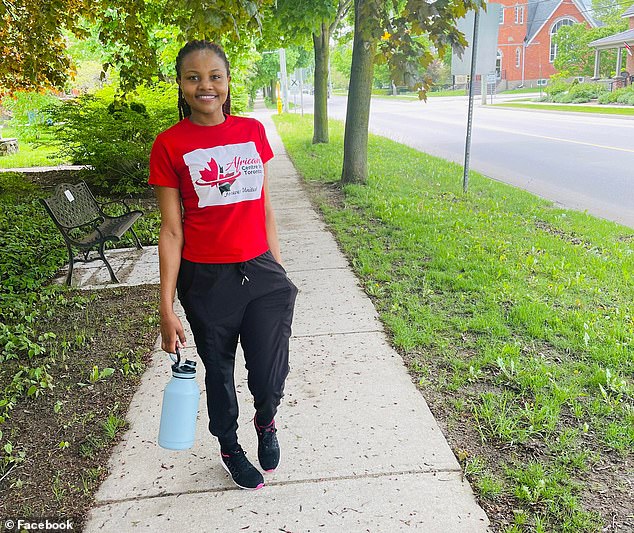 Canadian authorities contacted Nyabuto to alert him about his daughter’s condition but did not reveal what had happened to her or why she was going to the hospital.

Hellen was often smiling on her Facebook live stream while connecting with her friends and followers before the tragedy struck.

She constantly went in and out of the pool to check on her phone, where she was live streaming, and also ducked her head under the pool water several times. She would also hold her breath under water for several seconds in a breathing exercise.

The Kenyan health worker had been recording herself for almost ten minutes when she dove into the deep end of the pool. Seconds later, Hellen was struggling for air and was heard making loud cries while kicking and waving her arms.

Approximately two minutes later, there was no longer any activity in the pool water as it remained still and the area had gone quiet.

Three hours later, she was found dead in the water, while the video on her phone kept recording. 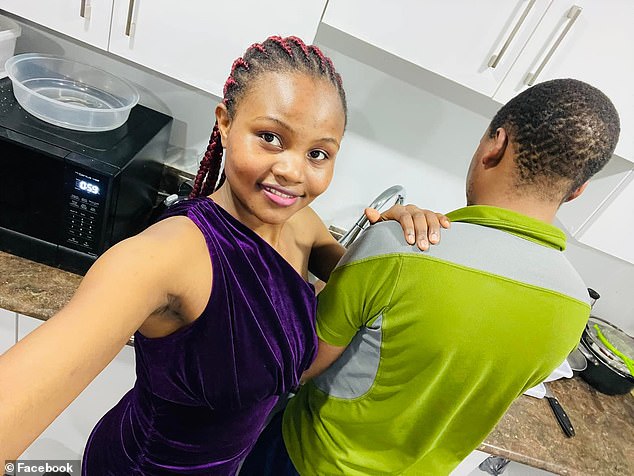 Hellen’s body is expected to be repatriated to Nairobi, Kenya, where most of her family lives

Meanwhile, Enock paid tribute to his older sister on Go Fund Me, describing her as ‘full of a life. With a warm smile and a charming heart. Everyone who met Wendy had their spirits lifted. She was passionate about her work and she touched many hearts.’

The funds will be invested into repatriating Hellen’s body to Nairobi, Kenya’s capital.

Meanwhile, Ontario Provincial Police told the Toronto Star that ‘steps are being taken’ to remove the video from social media.