Kim Jong Un has revealed his daughter to show the world his dynasty is going nowhere fast and North Korea’s nukes are here to stay, experts say

Kim Jong Un has revealed his daughter during the testing of North Korea’s largest ballistic missile to show the world that the fourth generation of Kims will inherit the dictatorship of the country, an expert has suggested.

North Korea’s despot was pictured holding hands with the girl as they toured and observed the ballistic missile testing. Kim Jong Un’s wife Ri Sol Ju was also pictured in attendance for the rocket launch.

The young girl is thought to be Kim Ju Ae. Her existence had never been publicly confirmed before.

The presence of his daughter, and his wife, at such a high security event suggests that the despot is signaling to the world that leadership of the totalitarian state will pass to a fourth generation of the Kim dynasty, Michael Madden, an expert on the North Korean dynasty, said. 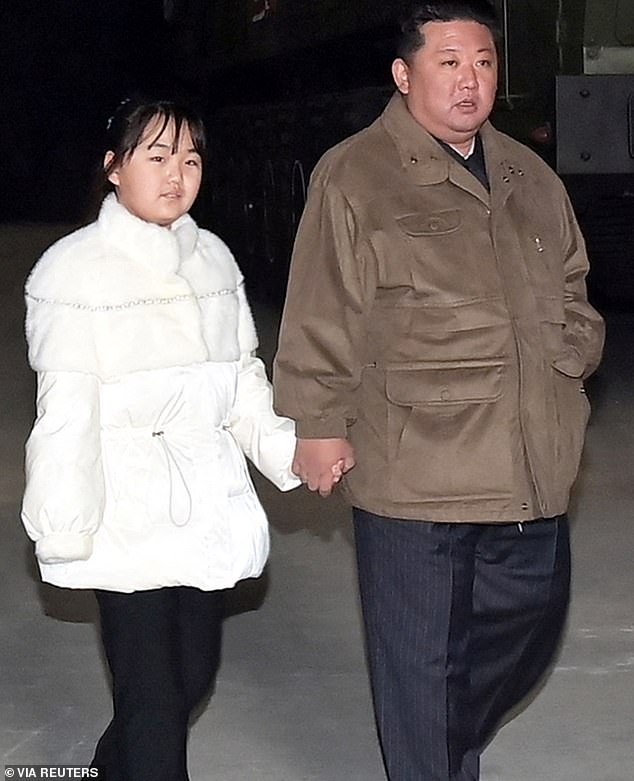 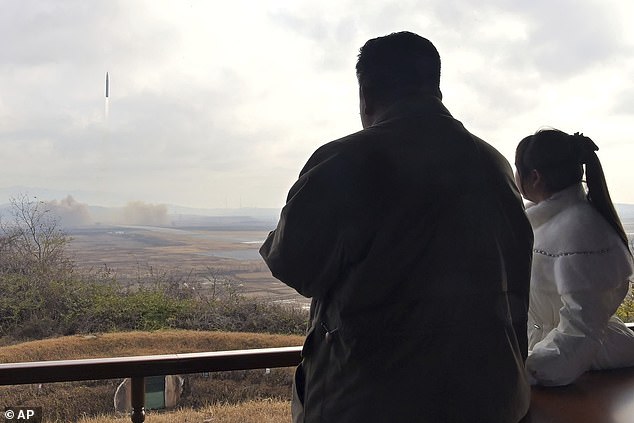 The North Korean leader Kim Jong Un and his daughter are pictured inspecting the testing of an intercontinental ballistic missile at Pyongyang International Airport, North Korea on Friday 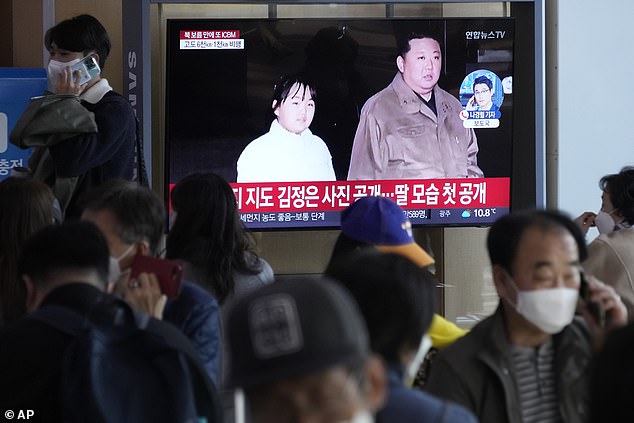 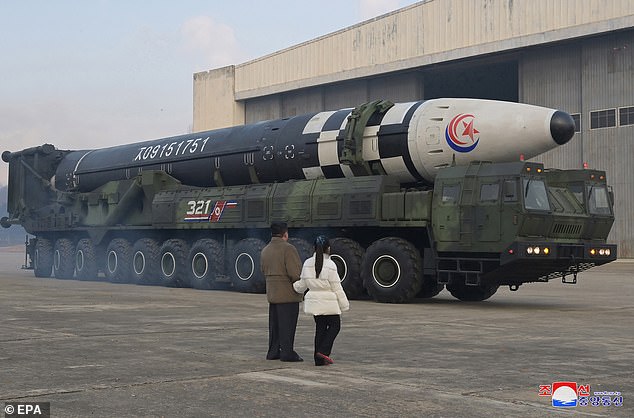 Michael Madden, a fellow of the Stimson Centre in Washington DC also said that the girl’s unexpected presence at the missile testing suggests that nuclear weapons will also be part of that inheritance.

North Korean state news did not name the girl in the photographs, although her name is understood to be Kim Ju Ae.

Mr Madden added: ‘This is the first observed occasion where we have seen Kim Jong Un’s daughter at a public event.

‘It is highly significant and represents a certain degree of comfort on Kim Jong Un’s part that he would bring her out in public in such fashion.’

He also said: ‘The nuclear weapons programme and Kim Jong-un’s accomplishments around them is a family legacy for whomever his successor is.

‘So, what we are seeing, is Kim telecasting that fourth-generation hereditary succession is highly likely to happen.

‘This is intended to communicate it to the wider North Korean elite as well as to foreign governments.’

Jenny Town, an expert on the totalitarian state from 38 North, a Washington-based North Korea research organisation, said that Kim Jong Un taking his daughter to the launch suggests he is not about to bow to pressure to slow his weapons programmes or return to negotiations.

The despot is ‘handing down a legacy’, she said. 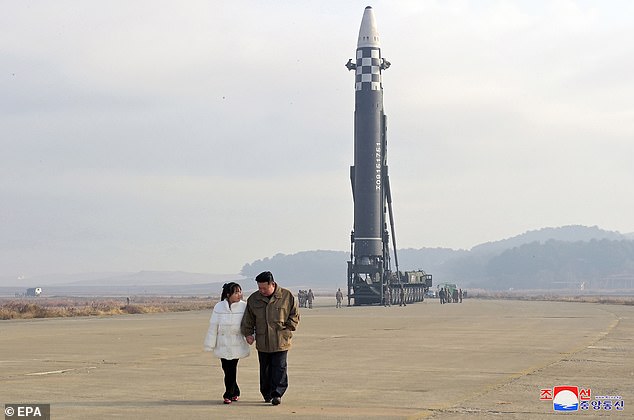 North Korean state news did not name the girl in the photographs, although her name is understood to be Kim Ju Ae 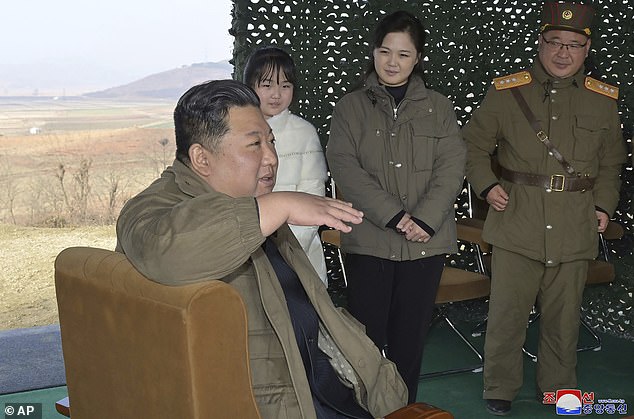 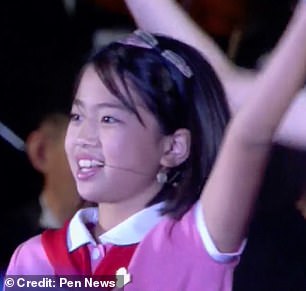 Kim Jong Un having a daughter had not been confirmed prior to this. However, American basketball star Dennis Rodman said that Kim did had a daughter after he made a controversial trip to the state in 2013. Mr Rodman said that he spent time with Kim and his family during his visit and held the baby.

‘This would indicate that she will be educated and trained to go into leadership – it could be preparing for her to assume the central leader’s position, or she could become an adviser and behind-the-scenes player like her aunt,’ he said.

The North Korean regime has never confirmed who would assume the tyrannical leadership of the country if Kim Jong Un were incapacitated.

Previous speculation has focused around his sister, Kim Yo Jong. Experts have suggested that she and a group of loyal advisors could play the role of regent until one of the Kim children were old enough to take over. 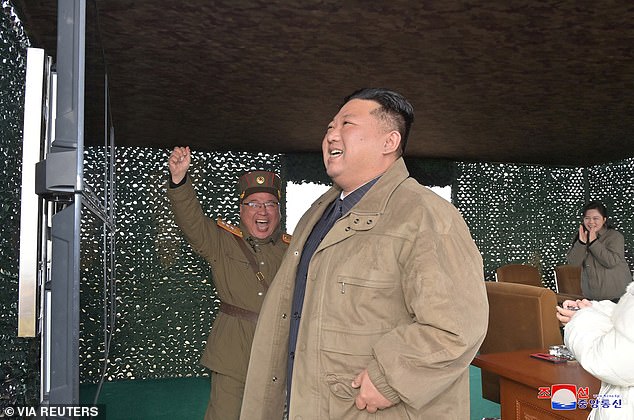 Expert Michael Madden said Kim Jong Un is ‘handing down a legacy’. He is pictured during the launch testing of the ballistic missile 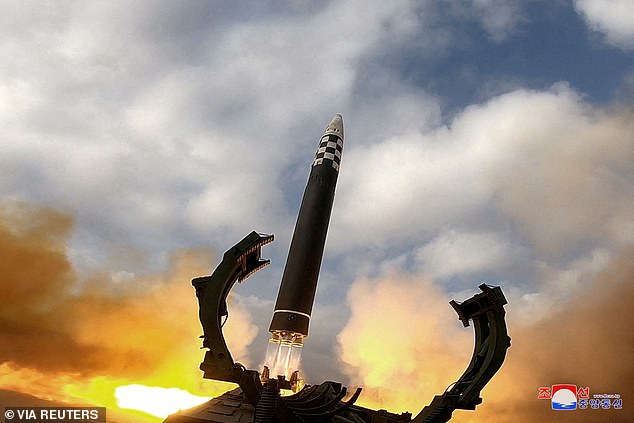 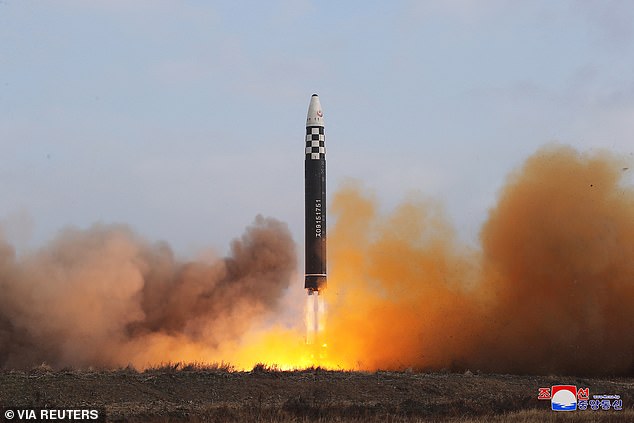 Michael Madden said: ‘The nuclear weapons programme and Kim Jong-un’s accomplishments around them is a family legacy for whomever his successor is’

He said: ‘Whenever Ri Sol Ju appears, there is strategic messaging involved. Normally designed to tamp down tensions, counter other aggressive messaging [like tests], or show Kim family cohesion in times of internal troubles.’