Kim Jong Un has warned that North Korea is facing a famine comparable with one in the 1990s during which millions of people are thought to have died.

The despotic leader said his country is in its ‘worst ever’ situation due to natural disasters last summer that devastated farmland, the Covid pandemic which has halted trade, and US-led sanctions over its missile programme.

Speaking at a party conference on Thursday, Kim drew parallels with the ‘Arduous March’ of the 1990s – calling on party cadres to prepare for a ‘more difficult’ crisis. 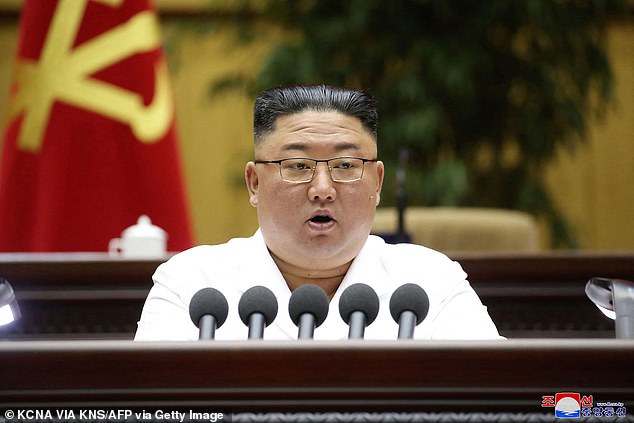 Kim Jong Un has warned party cadres in North Korea to prepare for a ‘more difficult’ crisis than the 1990s economic collapse and famine that killed up to 3.5million people

The ‘Arduous March’ is a term used by North Korean propagandists to refer to a crisis between 1994 and 1998 which saw the country’s economy collapse and led to widespread famine.

The fall of the Soviet Union – which North Korea relied on for aid – combined with drought, natural disasters and general mismanagement led to widespread deaths from hunger and related diseases.

While estimates of the death toll vary widely, it is thought that up to 3.5million North Koreans perished.

The country’s economy and food security has improved since, but the Hermit Kingdom is still hugely reliant on overseas supplies to feed its people.

North Korea is a mountainous nation, meaning suitable land for farming is in short supply and many of its farmers lack access to tools such as tractors, combine harvesters and threshers.

As a result, it is thought that North Korea relies on foreign imports and aid to feed around a third of its population.

Even with those imports, a 2017 UN report concluded that two fifths of the population are undernourished – meaning they don’t have access to the number of calories needed per day to maintain a healthy weight.

A third of North Korea children are also thought to be stunted, meaning they did not get enough calories during the early years of their life.

Imports and aid into North Korea have all-but stopped after the country closed its borders to stop it importing Covid cases.

Meanwhile a series of typhoons that hit last summer led to widespread devastation on farmland just before harvest season.

North Korea monitoring groups have not yet detected any signs of mass starvation or a humanitarian disaster.

But Mr Kim’s comments still suggest how seriously he views the current difficulties, which foreign observers say are the biggest test of his nine-year rule.

‘There are many obstacles and difficulties ahead of us, and so our struggle for carrying out the decisions of the Eighth Party Congress would not be all plain sailing,’ Mr Kim told lower-level ruling party members on Thursday.

‘I made up my mind to ask the WPK (Workers’ Party of Korea) organizations at all levels, including its Central Committee and the cell secretaries of the entire party, to wage another more difficult ‘arduous march’ in order to relieve our people of the difficulty, even a little,’ he added.

The speech came at the closing ceremony of a party meeting with thousands of grassroots members of the ruling party, called cell secretaries.

During his opening day speech on Tuesday, Mr Kim said improving public livelihoods in the face of the ‘worst-ever situation’ would depend on the party cells.

During the party congress in January, he ordered officials to build stronger self-supporting economy, reduce reliance on imports and make more consumer goods.

But North Korea’s problems are the result of decades of mismanagement, self-imposed isolation and sanctions over its nuclear program, analysts say.

Jong, Kim, Korea, North, UN, warns
You may also like:

How many people died at the FedEx shooting in Indianapolis?

Fidel Castro's brother Raul, 89, will hand power to his president