London: Having studied his mother’s attempts to unify Britain at this time of the year for 69 years, the King’s first televised Christmas address comes in turbulent times.

Charles III will become the first king to deliver the royal Christmas message since his grandfather King George VI’s last radio broadcast in 1951, and the first by a male monarch to ever be beamed into living rooms via television. 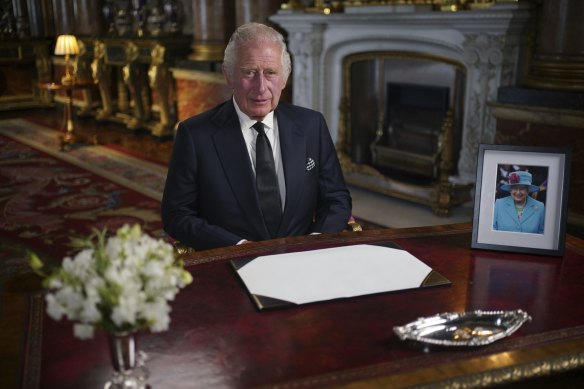 Britain’s King Charles III delivers his address to the nation and the Commonwealth following the death of Queen Elizabeth II.Credit:AP

Charles is a little more than 100 days into his new role and royal watchers believe he will likely feel the weight of expectation ahead of the speech that coincides with a fierce family feud with his son Prince Harry and wife, Meghan, as well as the economic uncertainty threatening Britain.

The King recorded the message on Tuesday last week, before the second instalment of Harry & Meghan, the Netflix documentary, was released. In the program Harry claims the palace “lied” to protect his brother, Prince William, and accuses his father of saying “things that just simply weren’t true”.

Royal commentators believe the King is likely to mention the Duke and Duchess of Sussex in his festive broadcast with the British press reporting that he had no desire to make any changes to his carefully considered message in the wake of their comments.

The late Queen Elizabeth II carried over the tradition started by King George V in 1932 and inherited by King George VI, her father, to deliver a Christmas address from Sandringham via radio every year. In 1957, she embraced the new technology and spoke to the Commonwealth via television for the first time. 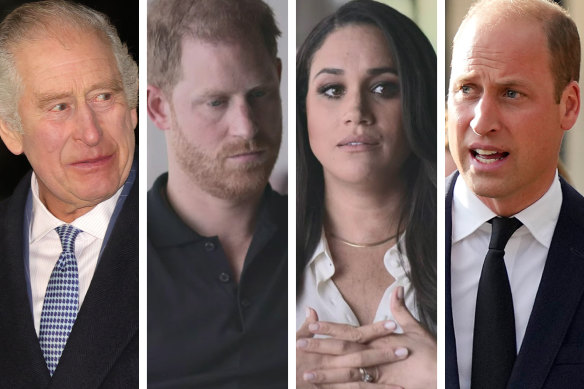 More than 9 million Britons tuned in to watch the Queen as she delivered her last message in 2021, about a million more than the previous year, making it Britain’s top-rating show on Christmas Day.

Royal biographer Hugo Vickers said the past fortnight has been a reminder that the new King’s family was fractured, although he was doing his best to retain a sense of togetherness.

“We have seen a united royal family out in force, attending snowy Christmas carols at Westminster Abbey,” he said. “With such displays, they are setting a tone for the new Carolean era and putting behind them the recent turmoil.

“After years of COVID restrictions and concerns, this is a chance for families everywhere to be together and celebrate more freely – although the challenges facing us today, particularly the cost-of-living crisis, are grave in a different way.”

Vickers said the broadcast was a chance for a “quiet message of unity and optimism”, which would be much needed in an increasingly uncertain world.

Averaging between seven and nine minutes, the speech was traditionally written by the Queen herself, with assistance from her husband, Prince Philip, and close aides. It is unclear how much of the blueprint set by his late parents will be retained by the King or whether he is likely to modernise it.

While the theme has not been confirmed, it is likely that Charles will pay tribute to his mother, who died in September. He delivered his first speech as sovereign that month, paying tribute to his “darling mama”, in a remarkably personal broadcast message.

Of his mother, he said: “We owe her the most heartfelt debt any family can owe to their mother; for her love, affection, guidance, understanding and example”.

The royals and their extended families will gather at Sandringham this year when they will mark a return to the festive seasons of old; the first gathering at the Norfolk estate in three years and the first any of them will have known without the Queen at the helm.

Prince Louis, 4, is expected to take part in the traditional Christmas Day walk to church for the first time, joining his siblings, Prince George, 9, and Princess Charlotte, 7, in scenes that will be broadcast around the world.

Camilla, the Queen Consort, is also expected to invite her children and grandchildren to Sandringham for Christmas for the first time, The Sun reported.

A source told the paper: “Camilla is keen that her family are at the heart of Christmas, particularly as Charles won’t have his youngest son there”.