Charles plays host with the very most: From Biden to Macron… King and Queen Consort welcome a who’s who of global leaders to ‘reception of the century’ at Buckingham Palace on eve of Queen’s funeral

King Charles III led senior royals in meeting with US President Joe Biden and other world leaders in a reception at Buckingham Palace last night.

The King enjoyed a warm handshake with Mr Biden and his wife Jill, after the President had earlier issued a touching tribute to the Queen, saying the ‘world was better for her’.

He was later engaged in conversation with the couple, along with the Queen Consort and the Prince and Princess of Wales.

His Majesty also met with dozens of other world leaders who have come to London for the Queen’s state funeral today.

Such a reception involving world leaders and British royals has not seen since the death of Queen Elizabeth II’s father George VI in 1952, more than 70 years ago. 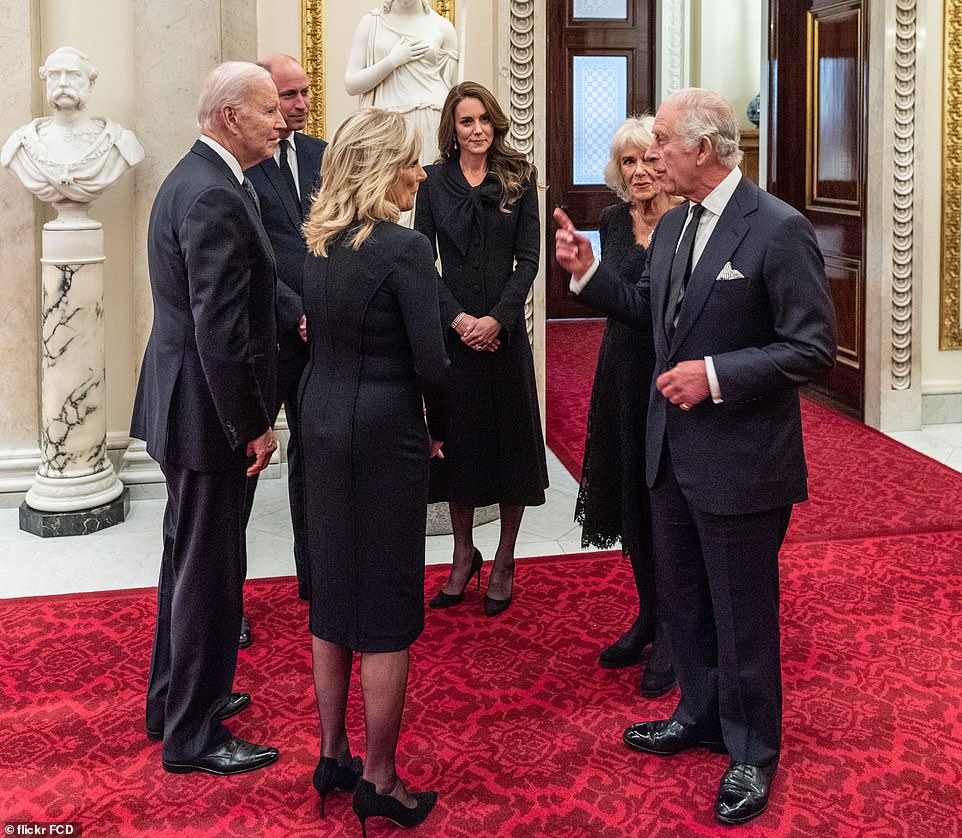 King Charles III led senior royals in meeting with US President Joe Biden and other world leaders in a reception at Buckingham Palace last night. Above: The King is seen in conversation with Mr Biden and his wife Jill, the Queen Consort and the Prince and Princess of Wales 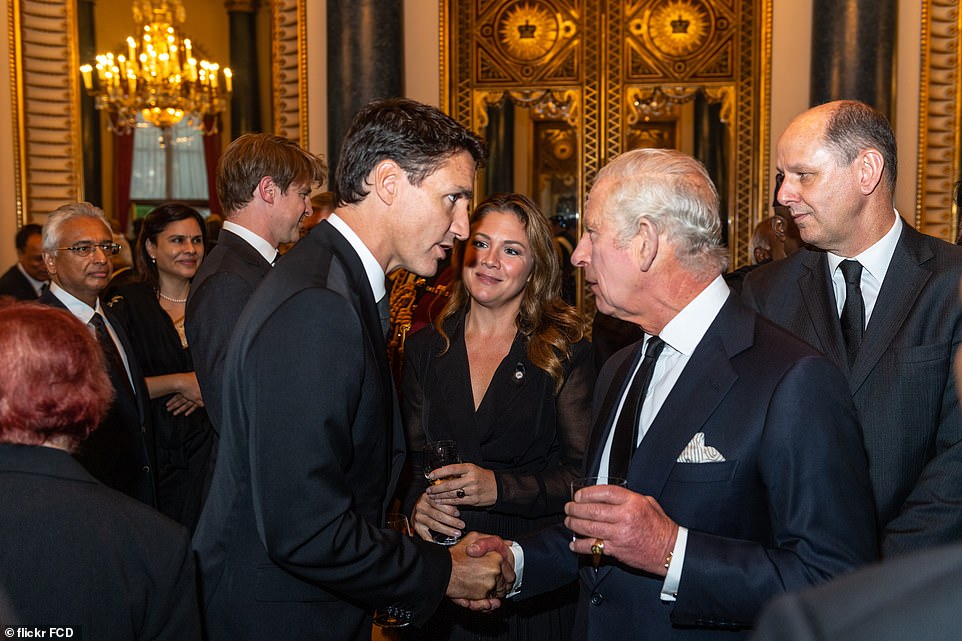 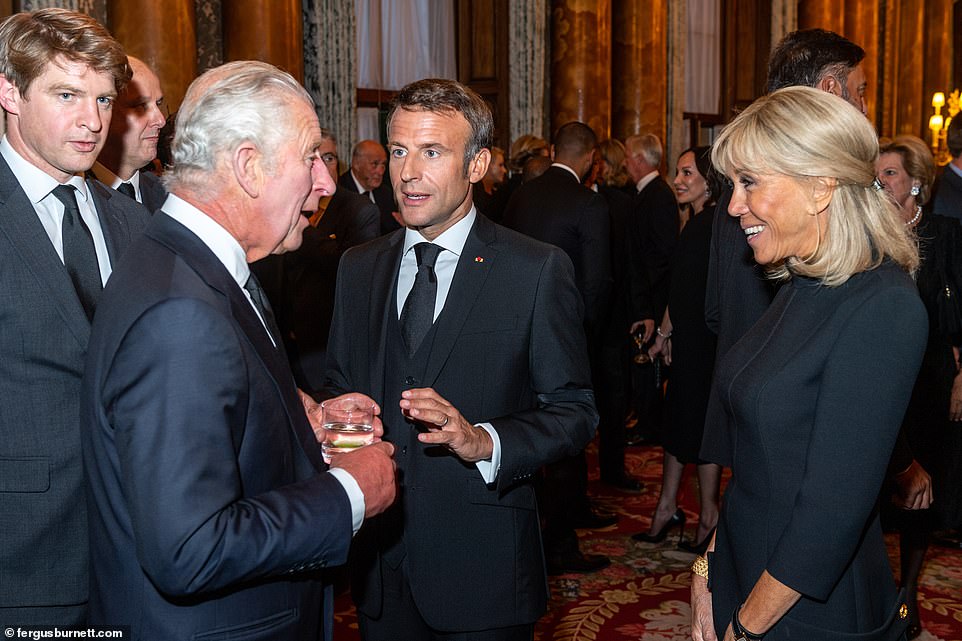 More recently, but not on such a grand scale, the now late Queen attended the G7 in Cornwall where she met and took part in pictures with the G7 leaders.

President of Ireland Michael D Higgins was seen being dropped off at the palace from a coach along with the former King and Queen Consort of Spain, Juan Carlos and Sofia and Ursula von der Leyen, the president of the European Commission.

Other working members of the royal family including the Earl and Countess of Wessex, the Princess Royal and Vice Admiral Sir Tim Laurence also mingled with guests including Japan’s Emperor Naruhito and the Kings and Queens from Holland, Norway and Sweden.

It came after the King and Queen of Bhutan last night paid tribute to the Queen while she was lying-in-state at Westminster Hall.

King Jigme Khesar and Queen Jetsun Pema, dubbed the ‘Prince William and Kate Middleton of the Himalayas’, made the journey to London ahead of the state funeral today. 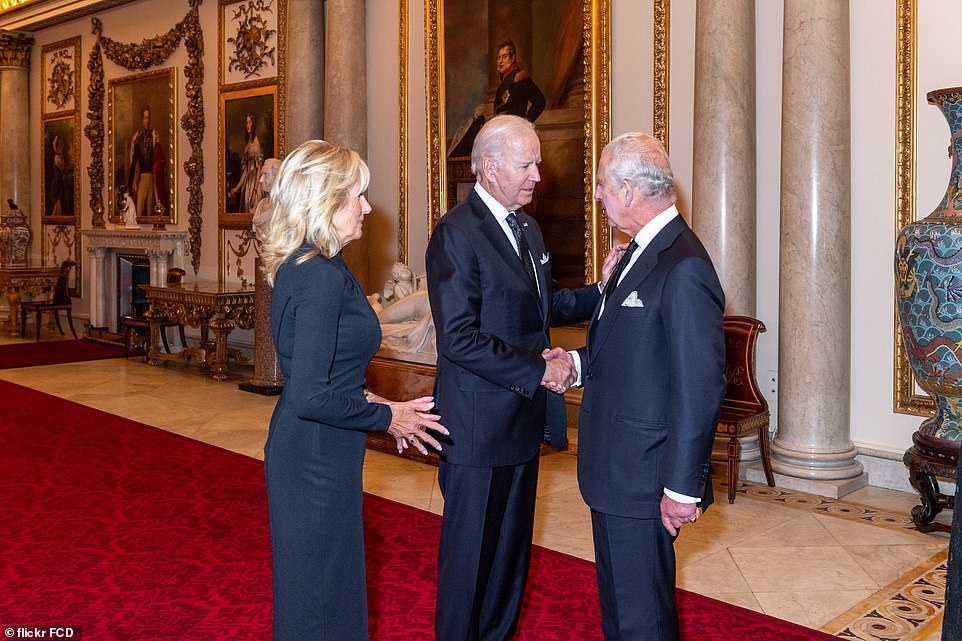 King Charles has a warm handshake with US President Joe Biden at Buckingham Palace last night, as his wife Jill stood by 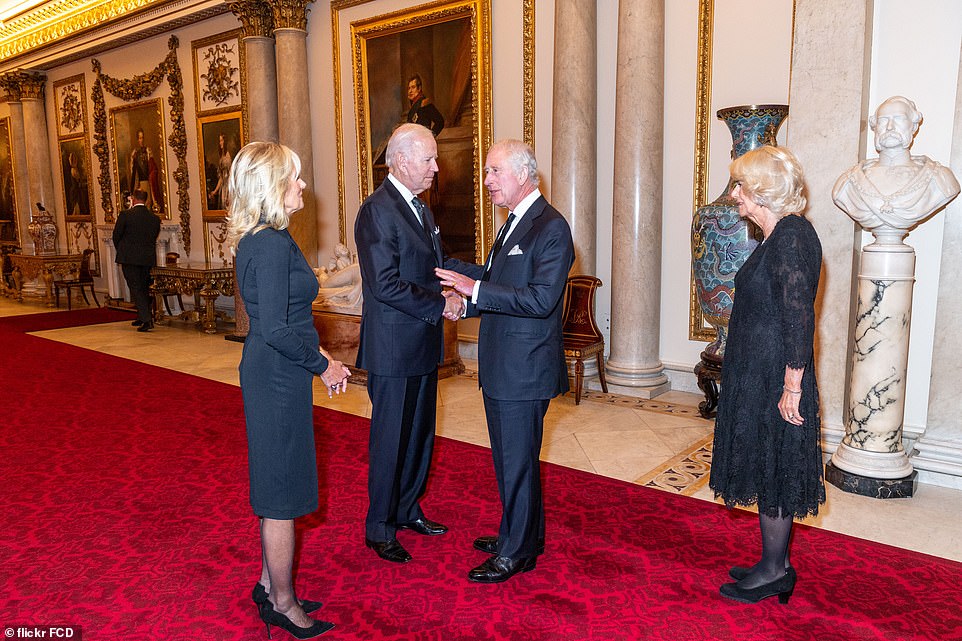 Camilla, the Queen Consort, was also at the reception for world leaders ahead of the Queen’s funeral today

They were photographed paying their respects at the Palace of Westminster, stopping to bow their heads and hold their hands in prayer.

The couple joined hundreds of monarchs, prime ministers, presidents and other foreign dignitaries last night for a reception hosted by King Charles III at Buckingham Palace.

King Jigme, the hugely popular fifth Druk Gyalpo, studied in the UK and the US and ascended the throne in 2006, aged just 26 after his own father abdicated.

Many dignitaries had already been viewing the Queen’s coffin in the ancient heart of Parliament after being given a VIP timeslot as ordinary mourners who queued through the night paid their respects with leaders of the free world.

The Prime Minister Liz Truss and Government ministers including Jacob Rees-Mogg and James Cleverly were also spotted heading towards tonight’s glittering state reception which took place in the picture gallery and state apartments and featured drinks and canapes.

Mr Biden visited Westminster Hall with first lady Jill Biden to pay his respects to the late monarch and after signing a book of condolence at Lancaster House said: ‘You were fortunate to have had her for 70 years, we all were.

‘The world is better for her.’ 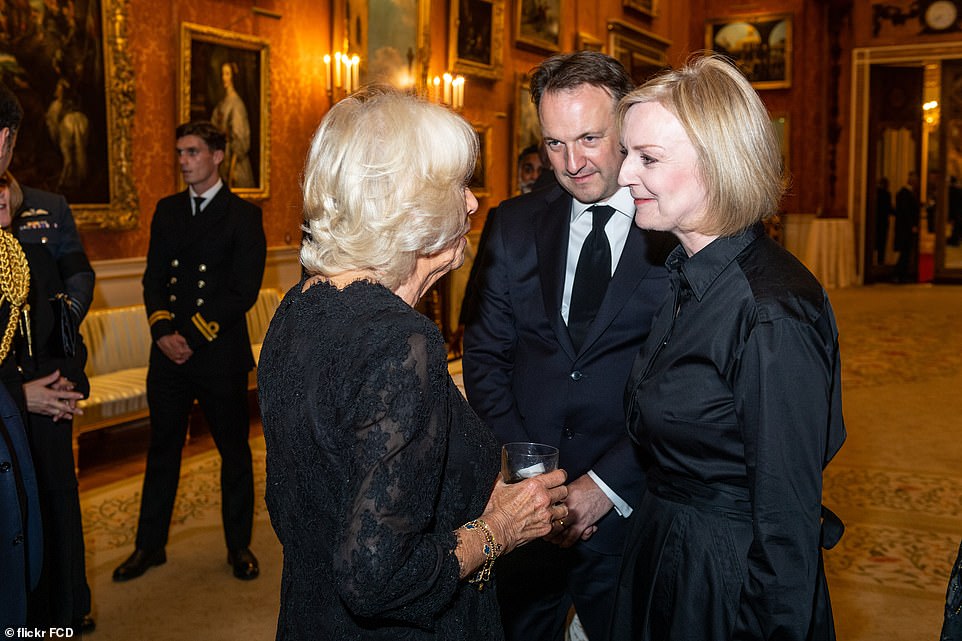 Also present at the reception was Prime Minister Liz Truss, who was seen with her husband Hugh O’Leary in conversation with the Queen Consort 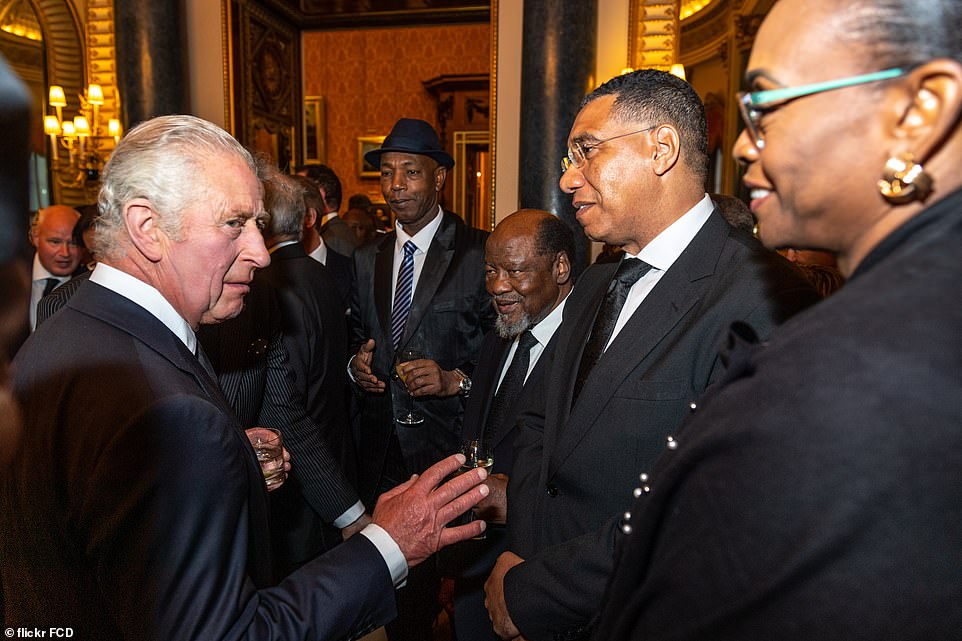 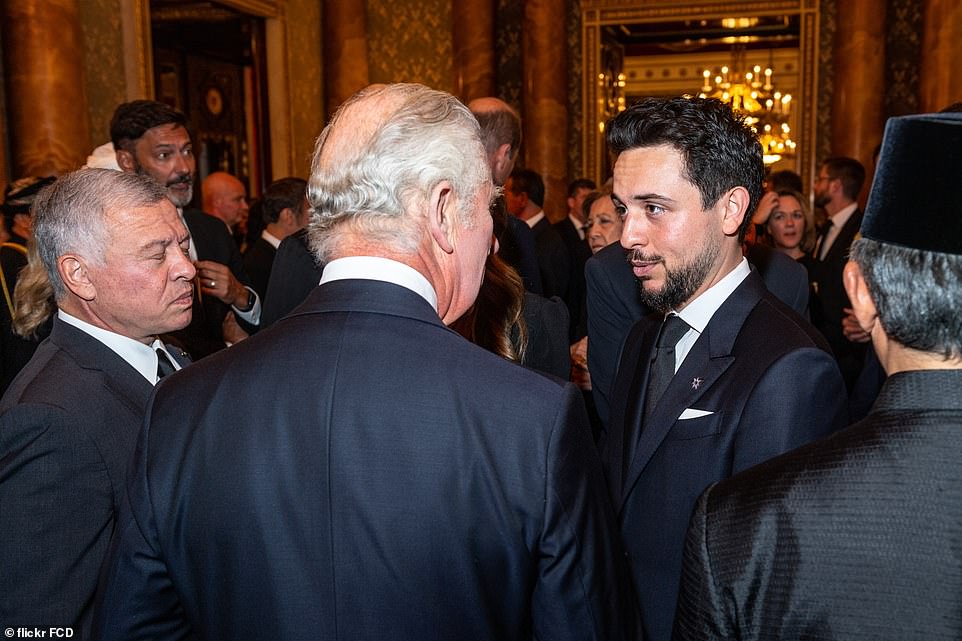 The King thanked the nation for the outpouring of support and warmth his family has received since the Queen’s death.

In his message issued by Buckingham Palace, Charles said: ‘Over the last 10 days, my wife and I have been so deeply touched by the many messages of condolence and support we have received from this country and across the world.

‘In London, Edinburgh, Hillsborough and Cardiff we were moved beyond measure by everyone who took the trouble to come and pay their respects to the lifelong service of my dear mother, the late Queen.

‘As we all prepare to say our last farewell, I wanted simply to take this opportunity to say thank you to all those countless people who have been such a support and comfort to my family and myself in this time of grief.’

A previously unseen portrait of the Queen smiling with joy was released by the Palace on the eve of her funeral.

The image was taken by photographer Ranald Mackechnie ahead of the Platinum Jubilee celebrations, and shows the monarch beaming brightly at the camera in her Windsor Castle home.

The Duke of York was the last of the Queen’s children to pay tribute, with Andrew saying: ‘Mummy, your love for a son, your compassion, your care, your confidence, I will treasure forever.’

Andrew hailed the Queen for her ‘knowledge and wisdom infinite, with no boundary or containment’, adding: ‘I will miss your insights, advice and humour.’