Lake Windermere has been covered in algae as ‘dying fish swim in circles’ and UK rivers and canals turn green during Britain’s extreme heatwave.

Aerial footage showed the iconic Lake District site overwhelmed with toxic blue-green algae after it continued to multiply in the hot and sunny weather.

A rapid increase in the number of algae, known as algal blooms, have transformed the water’s appearance from blue into a slimy pale green colour.

Fish looked to be choking on the water and ‘gasping for air’ as the blue-green algae in Lake Windermere continued to suck out the oxygen from the water.

Algae begins to multiply when the weather is warm and once the numbers are high they are likely to persist and dominate a waterway throughout the season.

An online petition to clean up Lake Windermere has garnered more than 100,000 signatures and will therefore be debated in Parliament.

Matt Staniek wrote about the dangers of blue-green algae on sea creatures such as fish and its impact on dogs and adults. 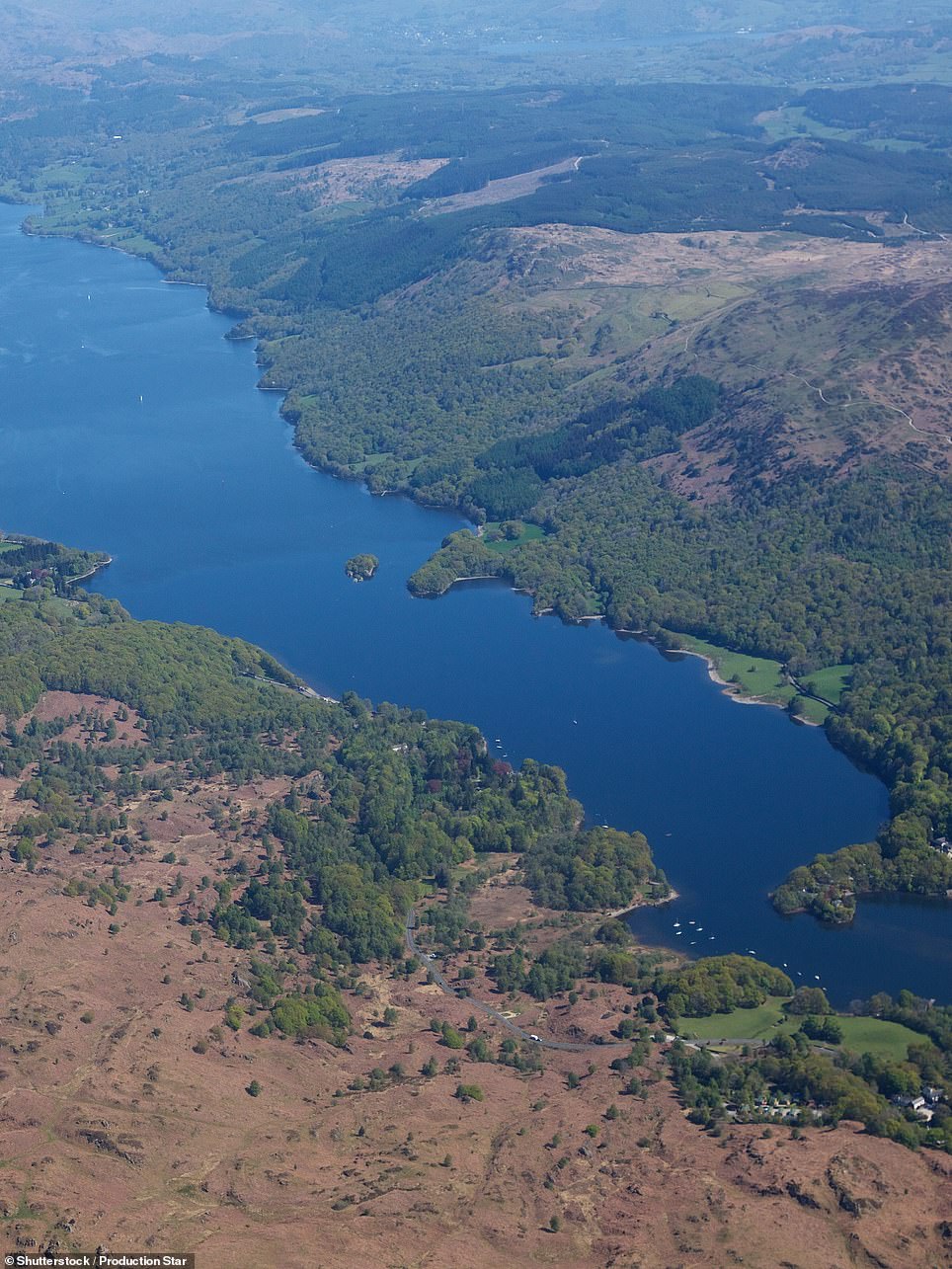 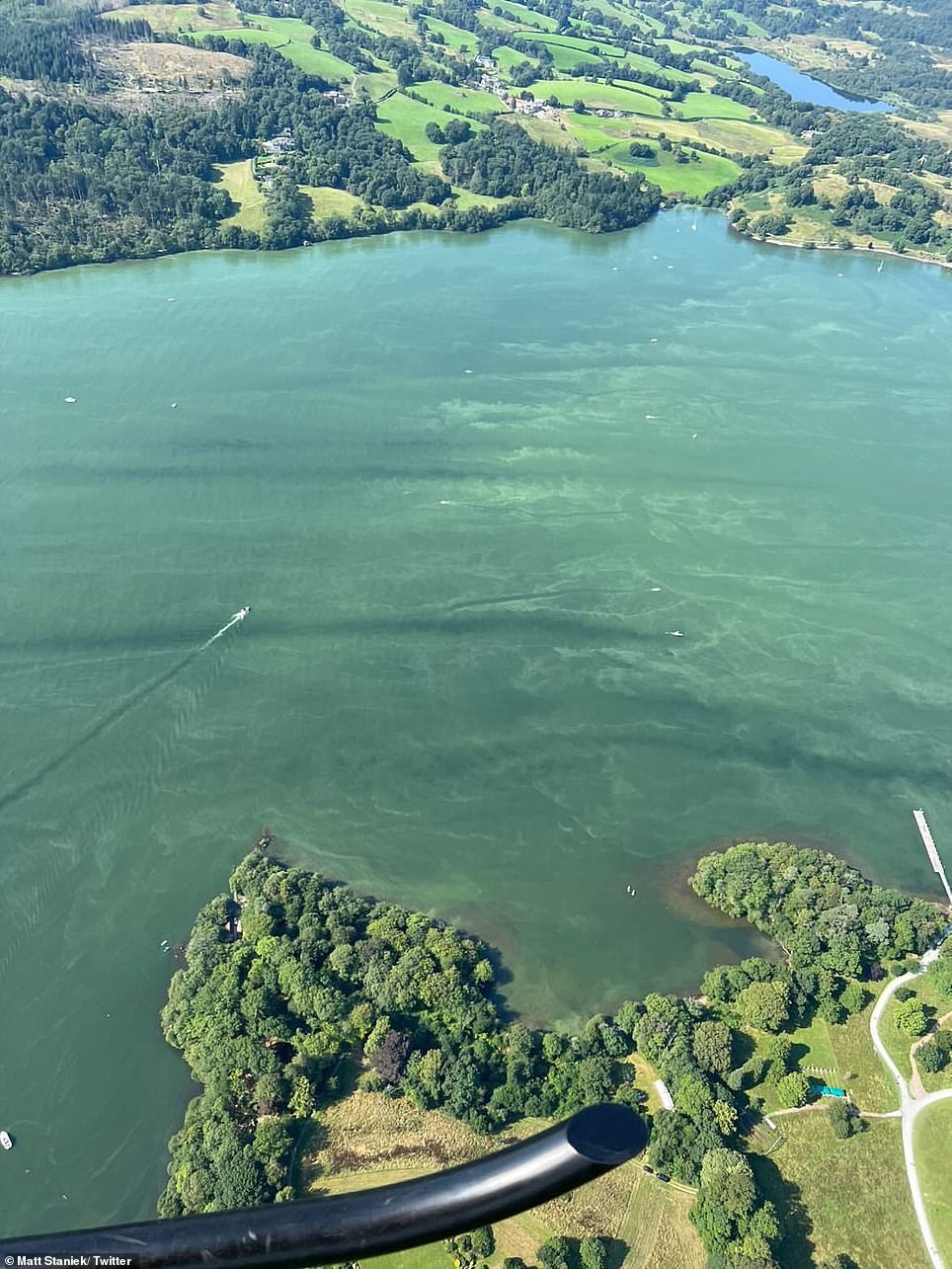 Meanwhile Britain’s waterways in cities such as Manchester and London show algal blooms developing because of sunny weather and high temperatures.

In Slough, Berkshire, algae can be seen completely covering the Jubilee River as temperatures soared and surpassed 30C once again –  and in Bedford day trippers have been warned about the algae at a local beauty spot which can cause skin rashes and lead to serious illness if consumed.

Barges and canal boats in Greater London were seen ploughing through pea-green soup algae which is covering the city’s canals, and where specialised boats have been called out on a daily basis to clean and clear the algae away.

Another image shows a horse drinking in a Hampshire lake while a swan in Bedford was seen trudging through the thick green mush. 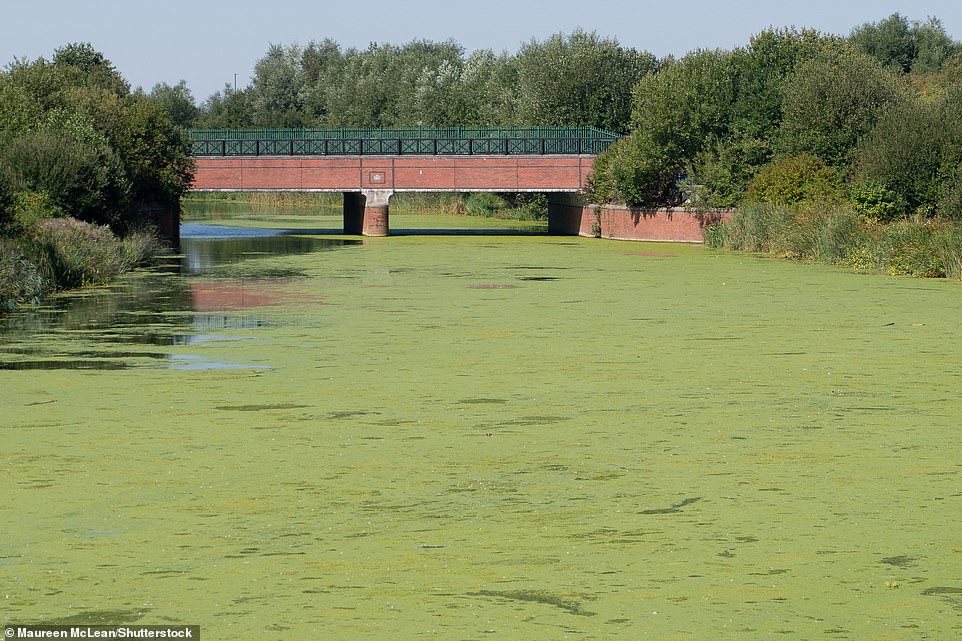 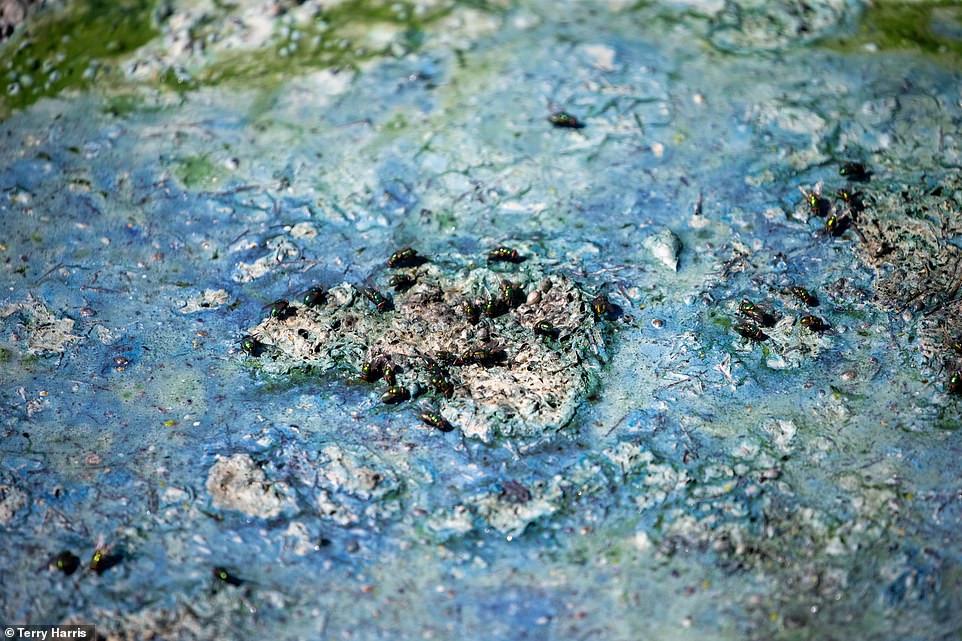 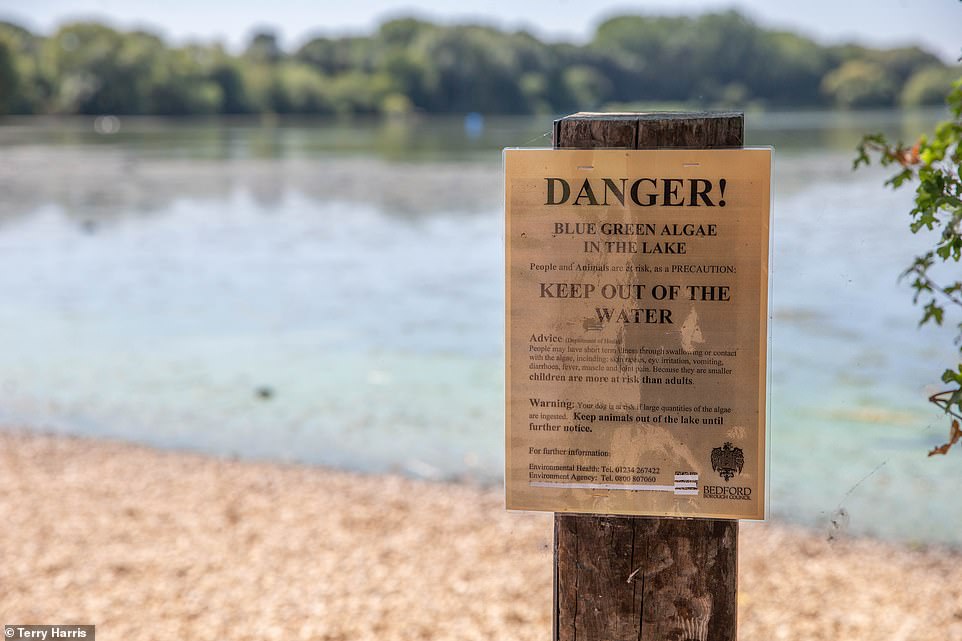 A warning post at popular Country Park, Priory Country Park, Bedford was put up to inform visitors of the dangers of blue-green algae which is toxic and poisonous 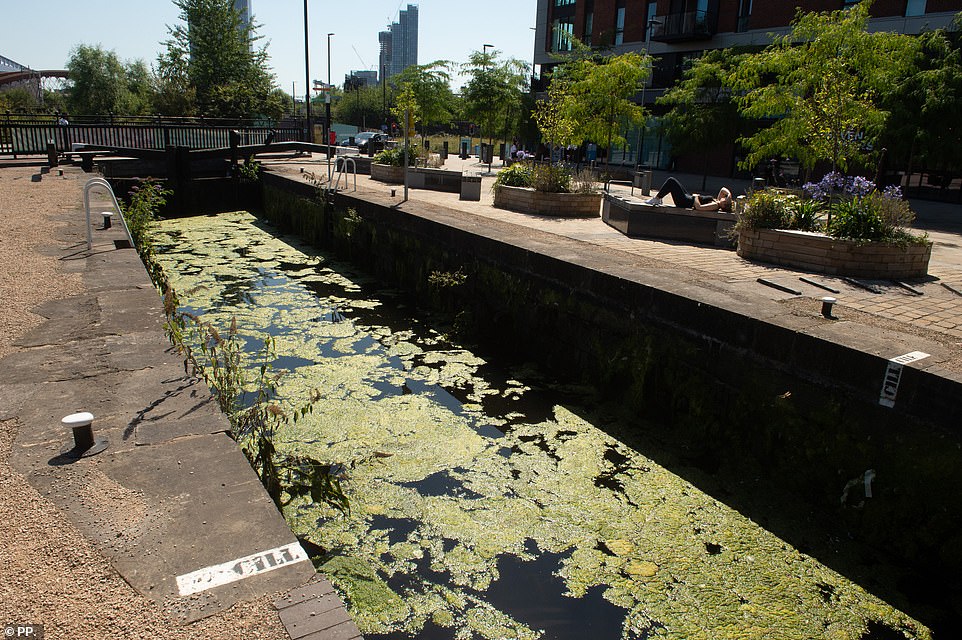 Algae floating in the water at Middlewood Locks, Salford, and blocking the natural sunlight for plants or other organisms at the bottom 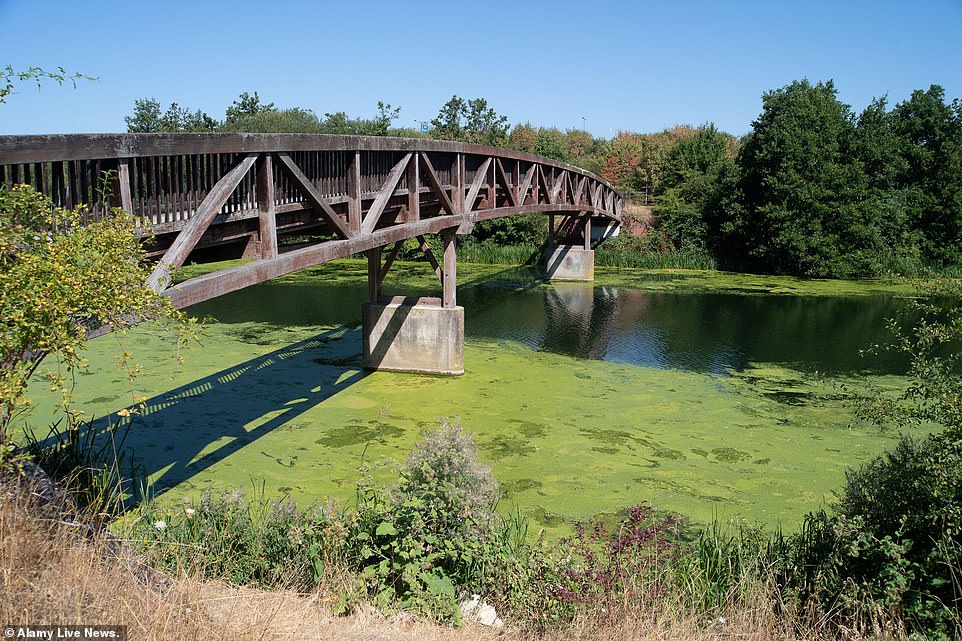 Algae blooms in Slough, Berkshire, are smothering parts of the Jubilee River as temperatures continue to increase across the country 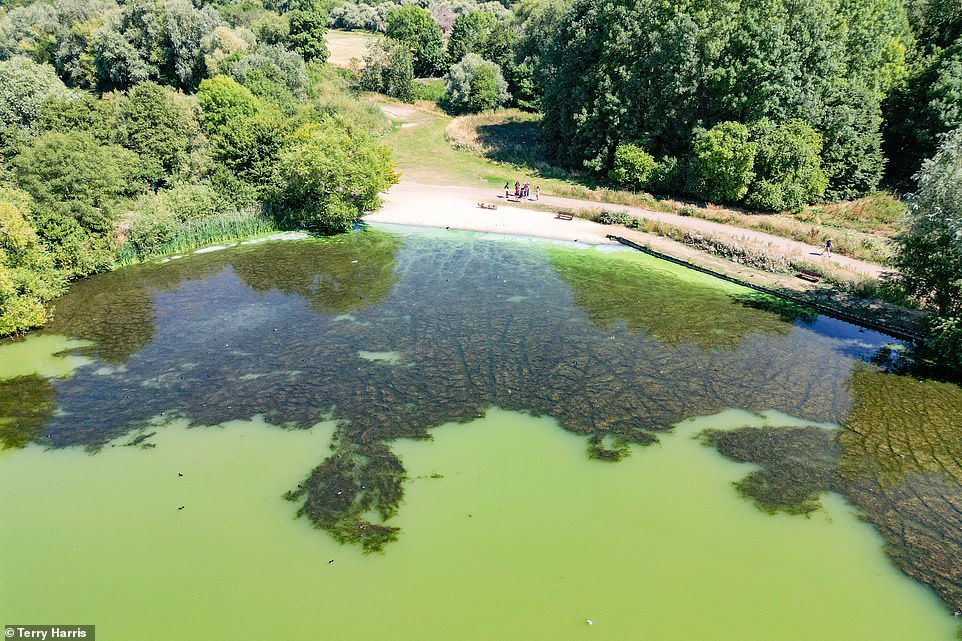 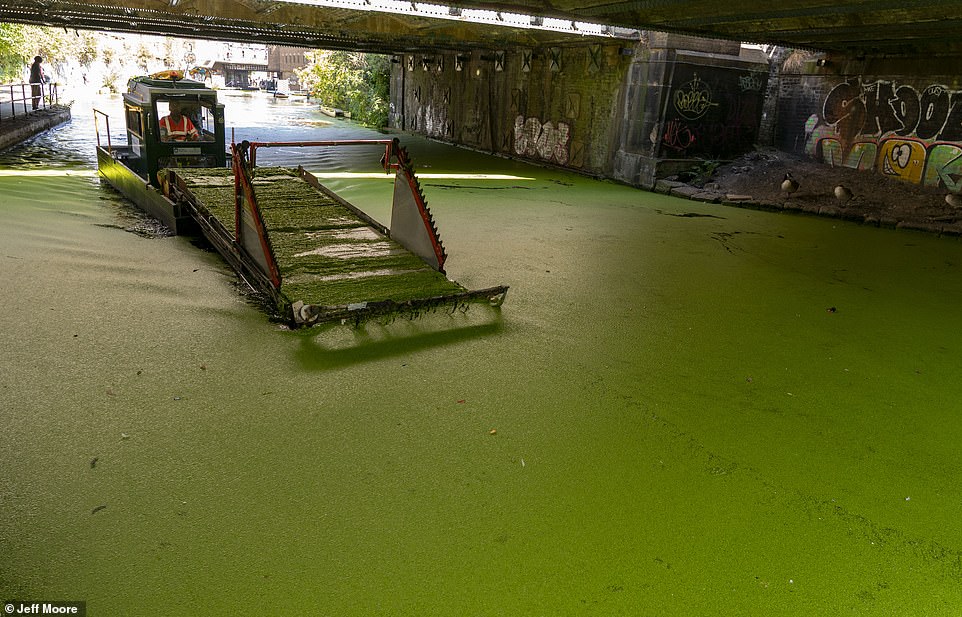 ‘Pea soup’ algae has begun to cover London’s canals, particularly in Regents Canal (pictured above), which looks as if it has been covered in a thick layer of green paint 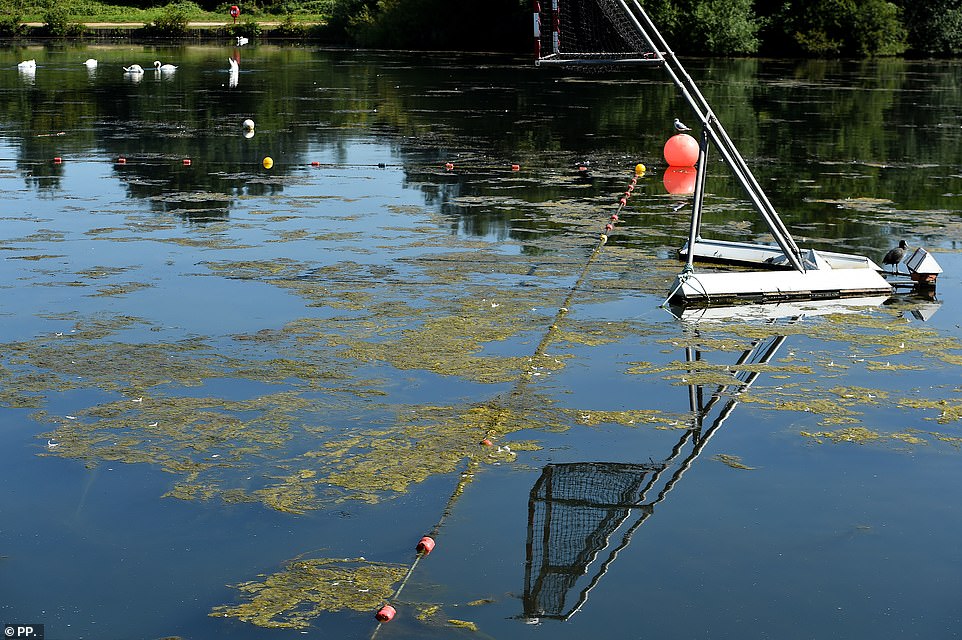 Photos from Sale Water Park, which is on the outskirts of Manchester, showed swans and birds navigating their way around the thick clumps of brown algae 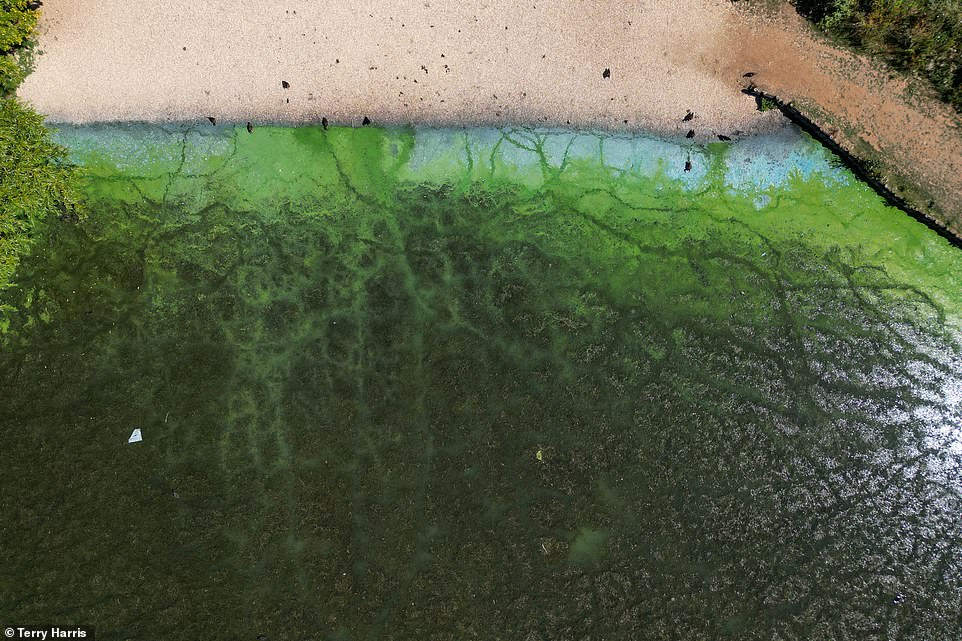 Blue-green algae, a toxic type which can be harmful for humans and other animals, covered a popular country park in Bedford on Thursday – pictured from above 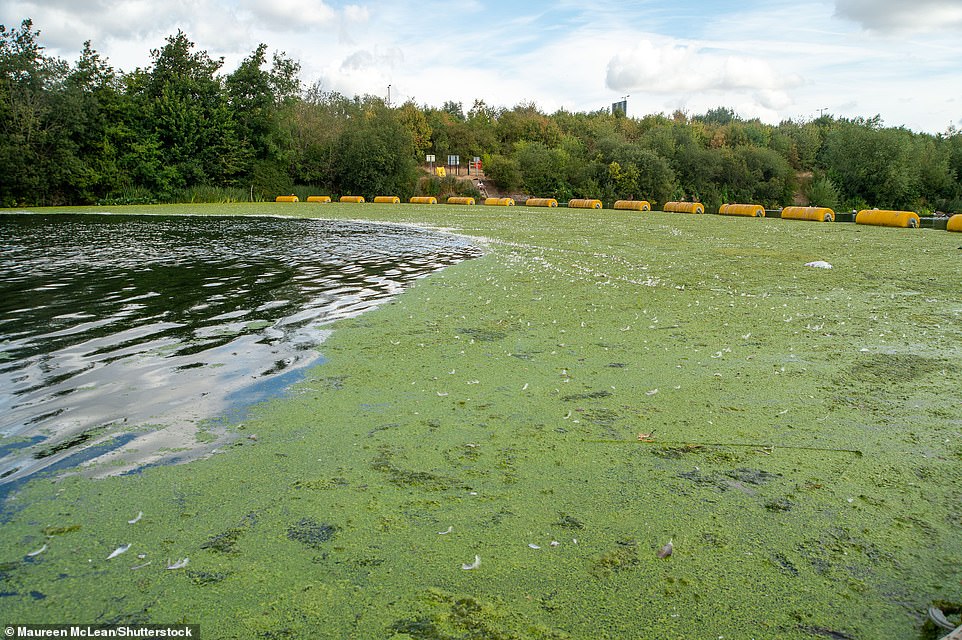 As the dry weather continues there is still no forecast for rain for the foreseeable future, more algae can be expected. Pictured: Algae and weed forming on the Jubilee River in Slough 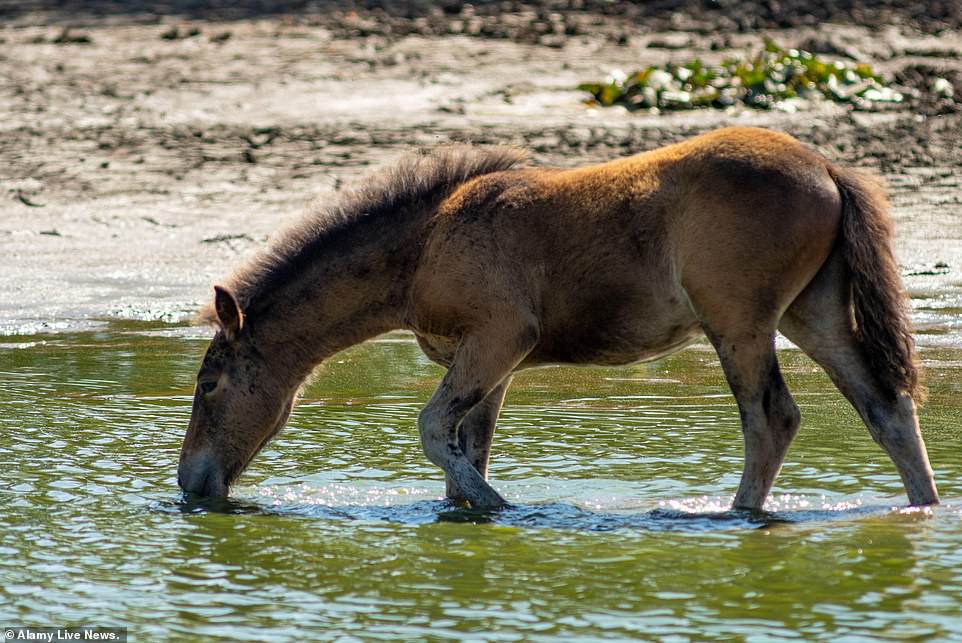 A pony foal drinks and cools down in Janesmoore pond in the New Forest, Hampshire as temperatures soar and surpass 30C 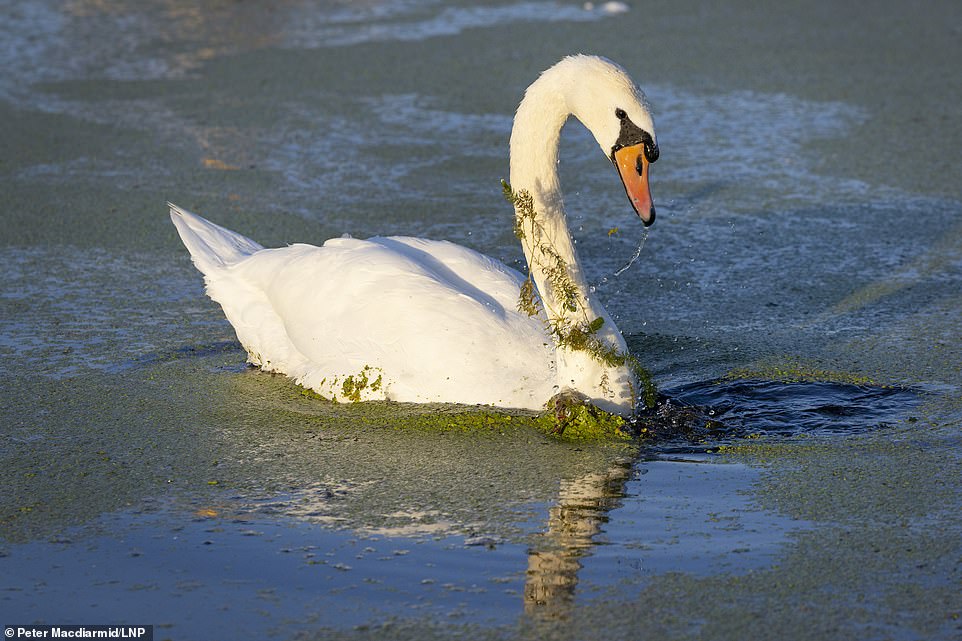 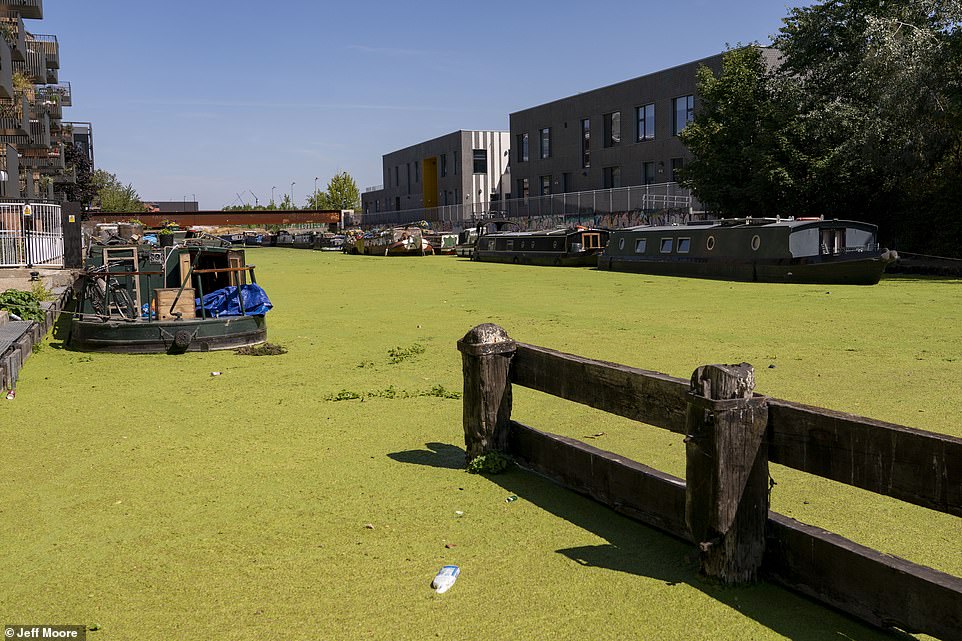 Due to the extreme hot weather algae has begun to cover London’s canals, where specialised boats are currently being used on a daily basis to clear the algae 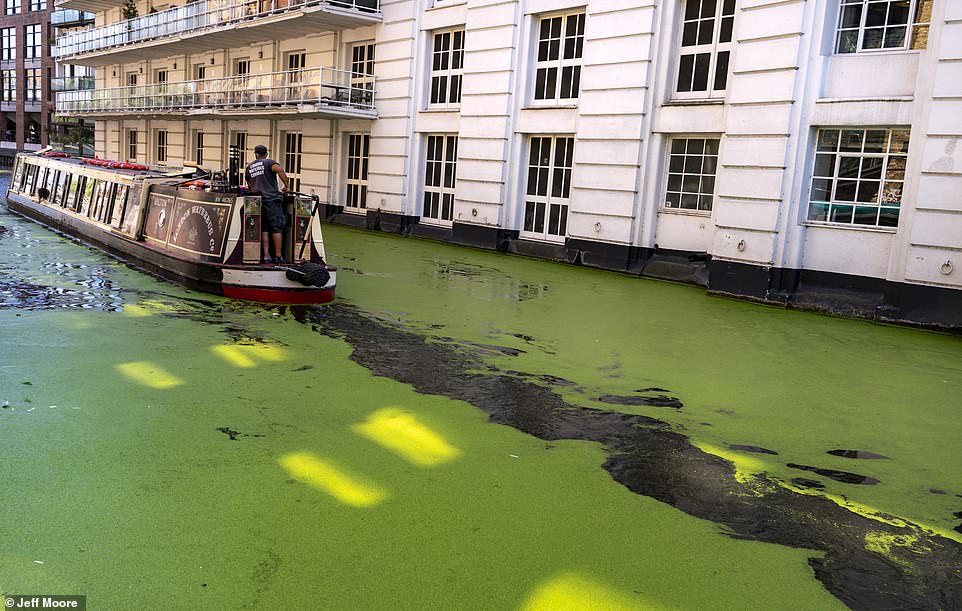 A narrowboat makes its way down a London canal in the extreme weather: the tracks are the only parts of the water which are not covered in algae 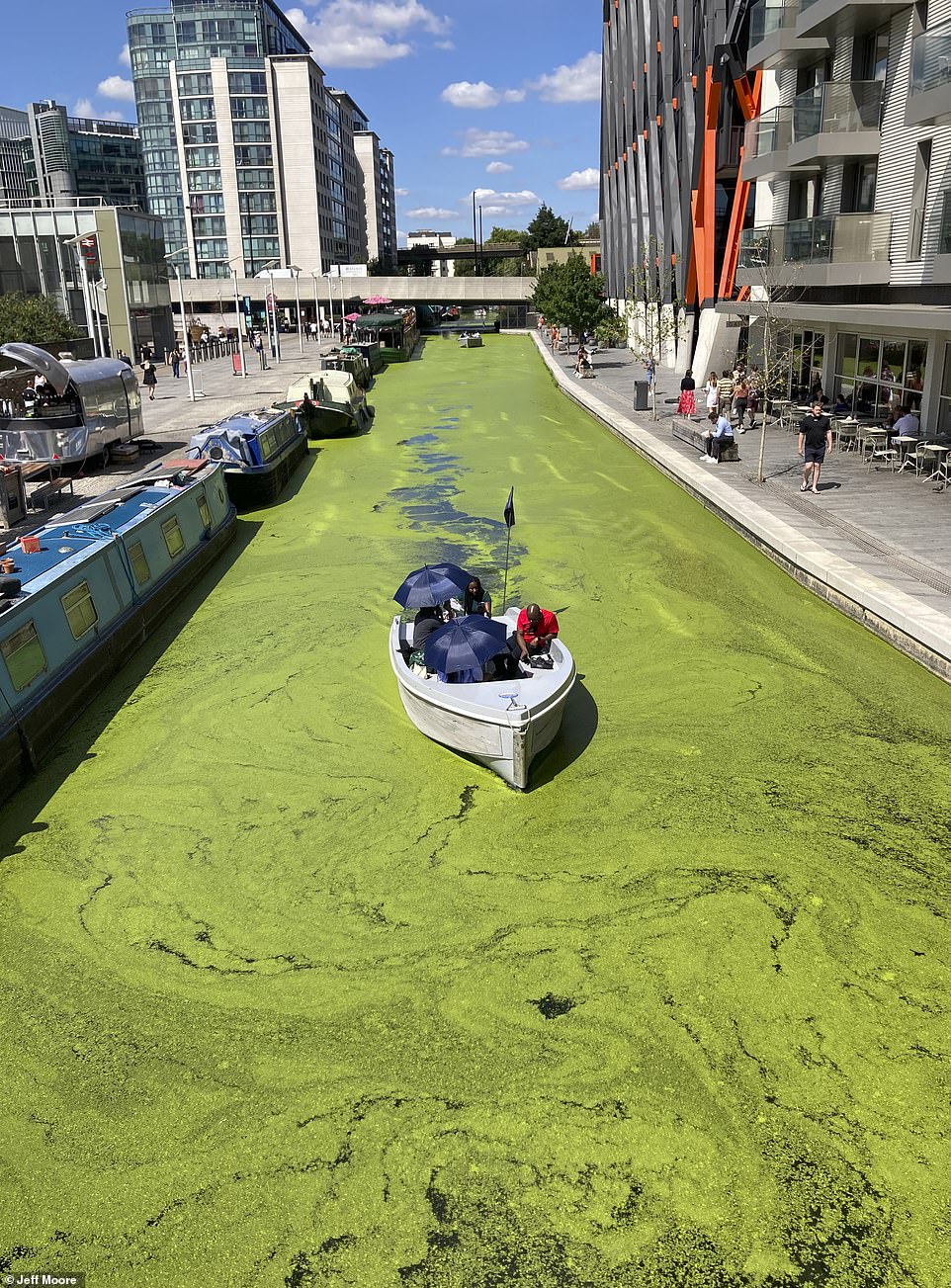 Although the pea soup algae has begun to cover London’s waters, a group of small people are making their way through Regent Canal while protecting themselves from the sun with large umbrellas

A warning sign was put up by local authorities at the Priory Country Park in Bedford which strongly advised children, adults and their pets to stay away from the lake there.

The blue-green algae at Priory Country Park, which produces an unpleasant odor, was seen swarming with flies and insects.

Snapshots of Sale Water Park, which is on the outskirts the Manchester, found swans and other birds navigating their way through the clusters of brown algae lying on top of the water.

An Environment Agency spokesperson said: ‘Hot, sunny weather can result in algal blooms forming and removing dissolved oxygen from our waters, which fish need to survive.

‘Environment Agency officers are out on the ground ensuring our fisheries are supported, deploying aeration pumps to restore oxygen levels and, when necessary, performing a fish rescue.”

Algal blooms usually develop in the summer months and occur due to higher temperatures, an abundance of sunlight and more nutrients.

Once they have multiplied the water becomes less clear and can appear as thick green paint, discoloured small clumps or brown paste.

Some such as blue-green algae can be poisonous and produce toxins which can make humans and animals very ill.

If they cover the whole water surface they can block much needed sunlight for plants at the bottom of Britain’s waterways.

As the temperature increases the level of oxygen in water decreases, which directly affects fish in rivers, canals and still waters.

Algae exacerbates this as it sucks up even more air which can lead to creatures and wildlife suffocating.

Algal blooms cause levels of oxygen to widely fluctuate over a 24-hour period placing additional stress on sea creatures.

The photosynthetic organisms are the base of all food chains.

Algae occurs naturally in rivers, ponds and canals but the right conditions can trigger an algal bloom. When one happens the water looks less clear and may look green, blue green or light brown. They come in different shapes and sizes, ranging from a thick brown mushes to green layers of paint.

Four key factors are usually at play to kick-start one, which include more of the right nutrients, warmer weather, atmospheric stability and lots of light.

Algae feed off nutrients such as carbon dioxide, nitrogen and phosphorous. High concentrations of these nourishments can spark a major outbreak of Algae in rivers, ponds and canals.

Another contributing factor which affects production is sunlight. Green plants like Algae need sunlight for photosynthesis, which is where green plants convert light energy into chemical energy.

With enough sunlight the number of green plants can explode in numbers.  Blue-green algae, such as cyanobacteria, prefer stable conditions and need them to proliferate. They also prefer warmer weather, according to British Columbia, and are more likely to develop at temperatures over 25C.