Follow
Home » World News » Lamar Odom would be open to dinner with ex Khloé Kardashian, just to 'be a friend'

Lamar Odom would be open to dinner with ex Khloé Kardashian, just to 'be a friend' 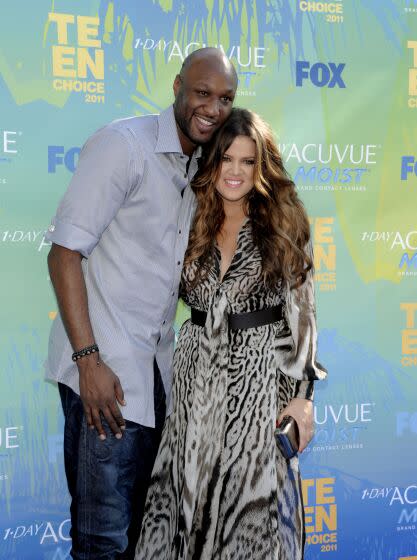 More than six years after the end of his turbulent marriage to Khloé Kardashian, Lamar Odom said he's open to reconnecting with the reality TV star.

"I would love to just take Khloé out for dinner," Odom told TMZ's Harvey Levin. "[To] be a friend. That's it."

The former NBA player spoke to Levin for the documentary "TMZ Presents: Lamar Odom: Sex, Drugs & Kardashians." The 43-minute special, which aired Monday on Fox, tracked the former couple's relationship — from their meeting at an L.A. party to the basketball star's infidelity and substance abuse, which led to their divorce.

Odom, who began dating the Good American co-founder in 2009, said he found Kardashian's "power and strength" attractive and enjoyed spending time with the "Keeping Up With the Kardashians" stars. After 30 days of dating, Odom and Kardashian tied the knot in September 2009 and shortly became the stars of their own self-titled series.

The reality TV spotlight, Odom told TMZ, was a "blessing." But the relationship was less than perfect, as began abusing drugs and seeing other women. "Drugs was my — that was my girlfriend," he told Levin. "I had a wife and cocaine."

Holding his head in his hand and tearing up, Odom praised Kardashian as "a good wife."

"She wasn't dismissive," he said. "She was protective, wanted to protect me."

Also laughing out of "embarrassment" over his past actions, Odom said he once went "so heavy with drugs" that a woman he was seeing used his phone to call Kardashian to pick him up. Despite Kardashian filing for divorce in 2013, the athlete's drug habits and infidelity continued well into October 2015, when he overdosed at a Nevada brothel. The couple called off their divorce while he recovered, then refiled and completed the split in 2016.

Even after their breakup, Odom said he's confident that Kardashian was the love of his life but told Levin that he's "too shy" and "afraid" of being denied to rekindle the past flame.

Meanwhile, Kardashian has moved on. The reality star now shares two children with basketball star Tristan Thompson. (That relationship has its own share of drama.)

"When she gets hurt, of course, that hurts me. I think what hurts me more is that it's not in my place to protect her," Odom said of Kardashian's on-and-off relationship with Thompson. "I can only protect her when she say, 'Lamar, I need your help with this.'"

Even if he doesn't hear back from her, Odom said he only wants what's best for Kardashian.

"Hopefully the next guy in her life will do a lot better," he said. "Hopefully he'll learn from me and Tristan."