PASADENA, Texas (AP) — A powerful storm system took aim at the Gulf Coast on Tuesday, spawning a tornado that downed utility poles and power lines, overturned vehicles and ripped roofs off homes and businesses in communities east of Houston. There were no immediate reports of serious injuries.

The National Weather Service had issued a tornado emergency for that area, warning that a “large, extremely dangerous and potentially deadly tornado" was on the ground Tuesday afternoon and was headed toward Baytown, about 25 miles (40 kilometers) east of Houston. The warning expired as the system moved to the east, leaving behind cooler temperatures.

Strong winds damaged commercial buildings, homes and power lines in nearby Pasadena, a city southeast of Houston. Utility poles and power lines were downed, and several vehicles, including a trailer, were damaged or flipped over in a parking lot.

Footage from Houston TV station KTRK showed several businesses suffered major damage, including the city’s animal shelter. Nearby, fences were laid over and shingles and sections of roofs were torn from homes, but there were no immediate reports of injuries. 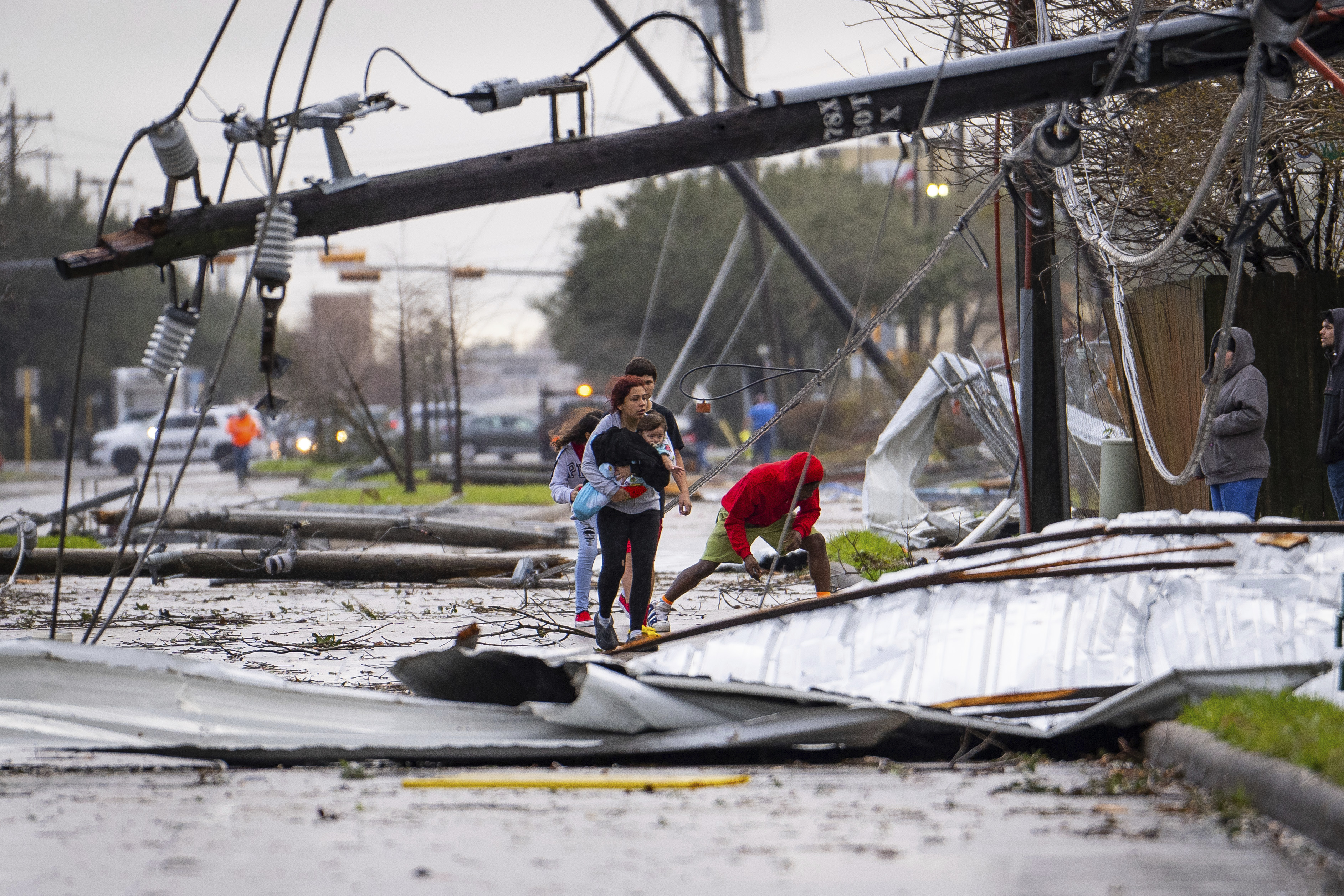 The American Red Cross said it was opening a shelter in Pasadena.

In Baytown, there were downed power lines and damage to homes and businesses, but no reports of serious injuries, said Baytown spokesperson Jason Calder.

Officials in nearby Deer Park said the tornado did severe damage to a nursing home. Residents had to be taken away, but no one was hurt.

As emergency crews worked to restore power, Deer Park Mayor Jerry Mouton Jr. urged anyone who needed a place to stay to look outside his city.

There is one aspect of me that’s amazed that no one got injured. We will deal with the property and recover and rebuild.Deer Park Mayor Jerry Mouton Jr.

“There is one aspect of me that’s amazed that no one got injured,” Mouton said. “We will deal with the property and recover and rebuild.”

Many of the suburbs in the area have a heavy presence of petrochemical industry sites.

Shell Chemicals’ location in Deer Park was flaring, or burning off natural gas, after it lost steam because of severe weather, according to Shell spokesperson Curtis Smith.

“We are taking steps to minimize any noise, light, or smoke associated with this activity, though it’s expected to continue until the units are restarted,” Smith said via email. “There is no threat to the community, nor are there any indications a nearby tornado touched down within the Chemicals facility.”

The website PowerOutage.us, which collects live power outage data from utilities across the United States, reported about 67,000 Texas customers were without power Tuesday night, mostly in the Houston area and surrounding counties. The site reported about 28,000 outages in neighboring Arkansas, and about 25,000 in Louisiana.

The storm system was also bringing snow and ice to much of the central U.S.

Schools and businesses were closed Tuesday across Oklahoma, which saw snowfall totals of between 1 and 6 inches (3 and 15 centimeters) across central and eastern parts of the state. Several school districts in southwest Louisiana dismissed students early Tuesday in anticipation of severe weather in the area.