It was more than a decade ago that former prime minister Kevin Rudd declared climate change “the great moral challenge of our generation”. Regrettably, the generation that has walked the halls of power since that time, most notably in federal Parliament, has largely proven not up to the task. And those who will be most affected by a warming planet, the younger generation, are not happy.

In pre-pandemic times, the most public display of this was the tens of thousands of students who took time out from school to flood the streets in protest across Australia. Despite being criticised by some politicians, it was a striking display of the passion that many younger people brought to the issue. 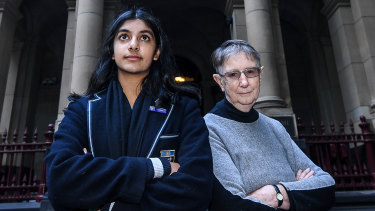 Lead claimant Anjali Sharma,16, and Sister Brigid Arthur, who is acting as the group’s “litigation guardian” because they are under 18.Credit:Justin McManus

While collective action has been largely curtailed by COVID-19, eight teenagers from across Australia have taken their demands for stronger action from the streets to the courts. In a landmark class action that begins in Melbourne’s Federal Court on Tuesday, the group are challenging the federal Minister for the Environment, Sussan Ley, to protect young people from climate change and the future harms of coal mining.

The five-day trial will determine the future of the proposed Vickery open-cut coal mine extension in New South Wales. The proposal would increase the mine’s coal production by about 25 per cent and emissions by 100 million tonnes of greenhouse gases over its lifetime. The teenagers want the minister to call a halt to the mine’s expansion.

Principal lawyer in the case David Barnden described it as public interest litigation, saying politicians and other people in power have specific rights and responsibilities to protect vulnerable people. “We are asking the court to recognise that the Environment Minister has a duty to protect younger people from the impacts of future climate harm. It’s the first time the court has been asked to recognise such a duty,” he said.

While it may be new in Australia, there have been many similar cases in a range of countries, most notably the United States. They rarely appear to get the backing of the judges involved, but to a degree that is not the point. This is a generation making a point – whether it be on social media, with placards on city streets, and in the courts – that our political leaders have failed to act with the urgency and decisiveness that is needed.

The teenagers are under 18 years old. Without the ability to make their voices heard at the polls, they are using whatever means they have at hand. For a generation which will have to live with the full consequences of climate change, it is hardly an unreasonable level of concern.

The Environment Minister, in her submission to the court, does acknowledge that “the Earth’s climate is changing and humans are primarily responsible” and that “increases in temperature affect the environment, economy and society”. But Ms Ley has no intention of conceding ground on the broader responsibility government may have for not acting quickly enough. She puts it bluntly: “The Minister does not owe a duty of care as alleged.”

In a legal sense, there is little doubt that Ms Ley has the stronger case. It would take a brave judge to set such a precedent. But if Australia’s political leaders think they can ignore it, they do so at their peril. The younger generation may not be able to vote yet, but when they can, they are sure to have little time for those who have dragged their heels tackling climate change.

foolhardy, leaders, shun, teen, to
You may also like: