Militant lecturers yesterday threatened to bring every university in the UK ‘to a complete standstill’ with strikes in a bitter dispute over pensions and pay.

More than 70,000 staff at 150 universities could walk out before Christmas, causing massive disruption to millions of students across the country.

Members of the University and College Union (UCU) voted ‘yes’ to strike action in two separate ballots, which may lead to ‘unprecedented’ industrial action.

It is a further blow for undergraduates who have already suffered campus closures during the pandemic and extended use of online learning.

The UCU announcement was immediately condemned by the Office for Students (OfS), which said it ‘cannot be right that students face further disruption to their studies’. 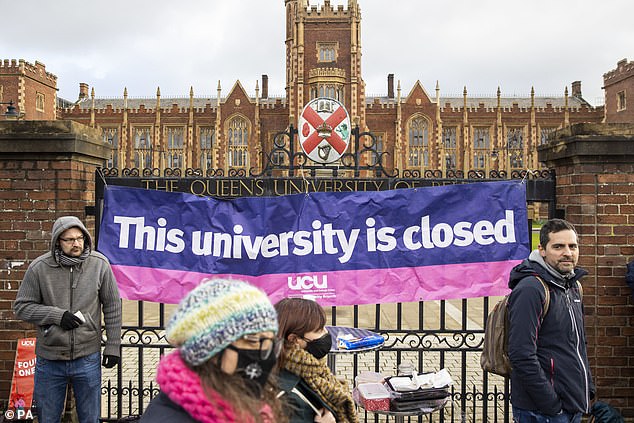 Militant lecturers yesterday threatened to bring every university in the UK ‘to a complete standstill’ with strikes in a bitter dispute over pensions and pay (Pictured: University Belfast as staff embarked on 10 days of strike action on February 14, 2021)

The higher education regulator said it was ‘very concerned’ about the potential impact of these strikes, urging employers and trade unions to ‘work quickly so that any industrial dispute does not materially affect students’.

An OfS spokesman said: ‘Universities are subject to consumer protection law, and they should consider how they will make up for any disruption caused by industrial action.

‘This might include rescheduling any teaching which is missed, delivering course topics in a different way or considering whether partial refunds of tuition fees are appropriate. Students should not be disadvantaged academically because of any disruption.’

The UCU, which represents academics, lecturers, researchers, managers, administrators and other staff such as librarians, has called on vice chancellors to enter negotiations in order to avoid strikes. 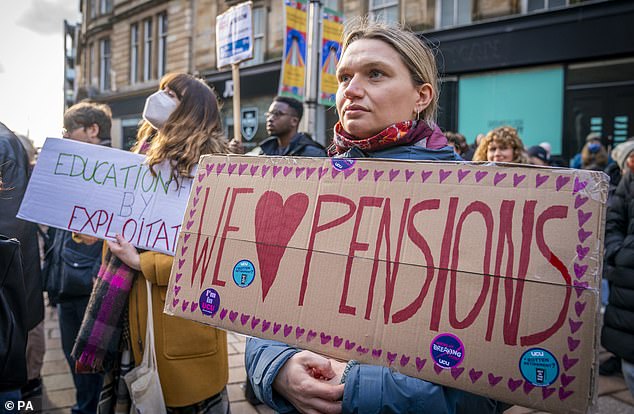 (Pictured: Members of the University and College Union (UCU) during their rally in Glasgow on February 14 this year)

The union’s higher education committee meets on November 3 to discuss next steps.

UCU general secretary, Jo Grady, yesterday said universities have a ‘small window’ to ‘get serious’ in negotiations and reach an agreement.

She added: ‘But let me be crystal clear – if you do not take this opportunity, we will bring every university in the UK to a complete standstill.’

UCU members at 145 universities were balloted on pay and working conditions. Turnout was 57.8 per cent, with 81.1 per cent voting for strike action.

In the separate pensions ballot, members at 67 institutions were asked to vote. Turnout reached 60.2 per cent and 84.9 per cent were in support of walk outs.

Both ballots were aggregated for the first time, which means that 150 universities in the UK could be hit by strike action in total.

In previous UCU walk outs, individual institutions had to meet the 50 per cent turnout threshold, with a majority yes vote, which led to patchier action.

UCU said it has become the only union to secure a national mandate for action in the education sector since the Trade Union Act 2016.

It is demanding a ‘meaningful’ pay rise to deal with the cost-of-living crisis. Staff were offered a three per cent pay rise this year, and many are on temporary contracts.

In the pension ballot, UCU is calling for employers to revoke a previous 35 per cent cut made to the guaranteed retirement income of the average members. 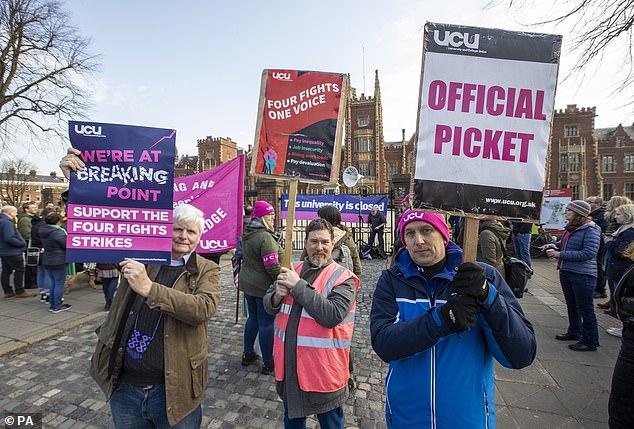 (Pictured: University and College Union (UCU) workers and supporters on a picket line at Queens University Belfast on March 21)

But Raj Jethwa, chief executive of the Universities and Colleges Employers Association (UCEA), said threatening industrial action ‘will not create new money for the sector’.

He said: ‘We hope UCU will carefully consider how to react to this ballot outcome.

‘If UCU is genuinely interested in discussing the challenges facing the sector, UCEA is willing to work with them, but attempts to try and take more industrial action may simply hurt some students and staff for no realistic outcome.’

A Universities UK spokesman, on behalf of USS (Universities Superannuation Scheme) employers, said the ballot results may leave students ‘concerned’ about the impact of potential industrial action on their degrees.

He said: ‘Universities are adept at mitigating the impact of strikes on student learning, and so prepared for any further possible industrial action over the coming months. 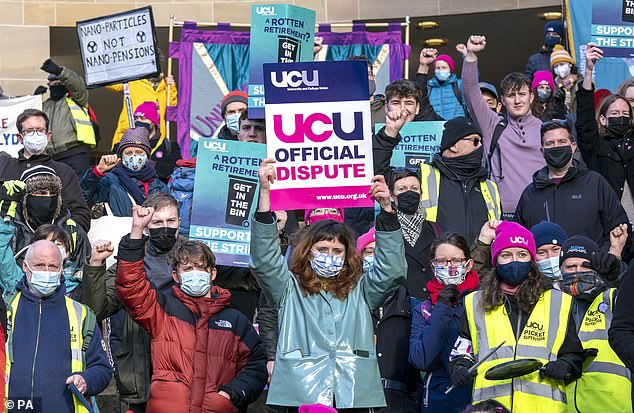 Members of the University and College Union (UCU) voted ‘yes’ to strike action in two separate ballots, which may lead to ‘unprecedented’ industrial action (Pictured: Glasgow rallies on February 14)

‘Universities will put in place a series of measures to minimise the impact of any industrial action on students, other staff and the wider community.’

In previous waves of UCU industrial action, students across the country have demanded refunds from universities after missing out on lectures and tutorials.

‘Lecturers would have a stronger case if they put the interests of students first.

‘The proposed action will be a self-inflicted wound leading to the closure of some universities. Lecturers need to understand that the money has run out. Some grossly overpaid vice-chancellors, however, should take a pay cut to help out.’

By Sean Poulter and Elly Blake for MailOnline

A new round of strikes at one of Britain’s biggest ports is threatening to wreak Christmas chaos with empty supermarket shelves in the run-up to Christmas.

Liverpool dockworkers resumed a two-week strike today after talks collapsed in an ongoing dispute over jobs and pay.

Nearly 600 dockworkers at the Port of Liverpool said they were staging the walkout, due to end on November 7, after talks with Peel Ports, the dock’s operator, ended in ‘chaos’.

Meanwhile, industrial action at the UK’s biggest container ship port, Felixstowe, is expected to be stepped up as stores prepare for the crucial Black Friday and Christmas trading period.

David Jinks, head of consumer research said: ‘Eagerly-awaited customer orders and key components for manufacturers will either be delayed or diverted to other ports, meaning increased delivery costs as trucks are forced to travel sometimes hundreds of miles to alternative ports.

‘Someone will have to foot the bill for all these increased transport costs and history tells us that it is usually the consumer.’ 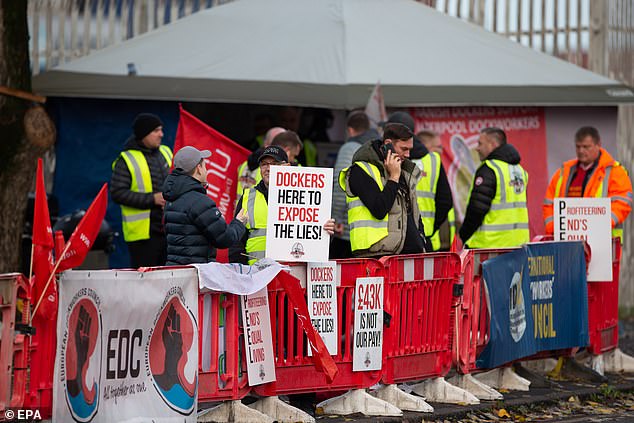 Meanwhile, Andrew Opie, director of food and sustainability at the British Retail Consortium said: ‘Retailers are adept at handling disruption in the supply chain and will be working closely with their suppliers to ensure customers can get the goods they need, such as by rerouting some freight through other ports or using alternative transport.’

Michelle Ovens, founder of Small Business Britain, added that ‘ongoing supply chain disruption has been wreaking havoc for an extended period now, and for this to be further exacerbated, particularly as businesses approach their vital peak selling period, is likely to cause a huge degree of harm.’

A spokesman for the Co-op said that the supermarket had ‘alternative arrangements in place’ and was not expecting ‘any significant disruption’ to food or non-food availability.

In Liverpool, Peel Ports said today that the decision for dockworkers to go on strike today was ‘hugely disappointing’.

The dock operator said Unite rejected an improved 11 per cent pay offer, however Unite disputes this, saying the true figure offered stands at around 8.2 per cent when pay scale and job role is taken into account.

The union is demanding a pay rise in line with inflation (RPI), which is currently 12.3 per cent and has accused Peel Ports of intervening to stop a deal from going ahead.

It comes as Britain braces for a winter of discontent as union workers across the country threaten to walk out over ongoing pay disputes, with 15,000 ambulance workers set to vote on whether to strike over a below-inflation pay rise today. 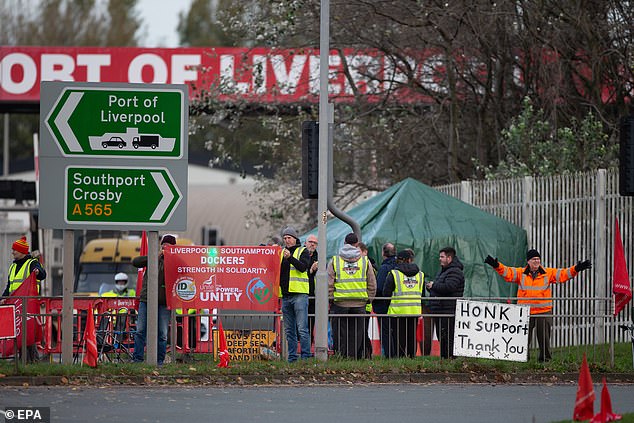 Liverpool dockers want a pay rise in line with inflation and accuse Peel Ports, the dock’s operator of making ‘untrue statements’ about what it has actually offered 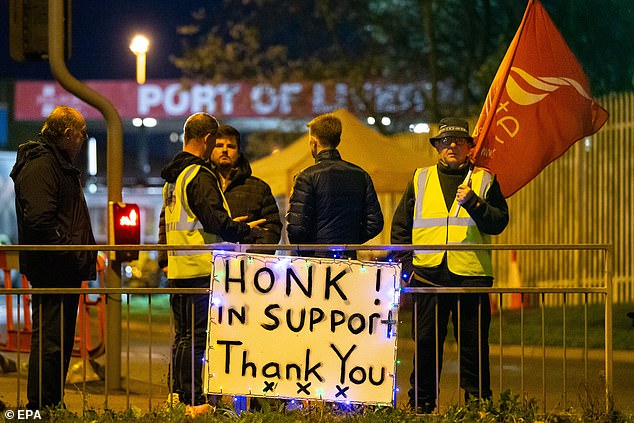 Meanwhile, Unite has accused Peel Ports of refusing to give dockworkers a ‘decent pay rise whilst profits soar’.

Paramedics, nurses and midwives are among the latest to vote on whether they will strike this winter as widespread discontent continues to hit many sectors of the economy.

It comes as 15,000 ambulance workers across 11 trusts in England and Wales will vote today on whether to strike over a below-inflation pay rise.

On Thursday, a Unison strike ballot of 400,000 NHS workers in England, Scotland and Wales will open and a ballot of Royal College of Midwives members in Scotland will come to a close.

Next week, on November 2, the Royal College of Nursing’s (RCN) ballot of 300,000 members will close.

If the Midwives union votes to strike, industrial action could begin as early as November 11.

Rachel Harrison, GMB acting national secretary, said: ‘Ambulance workers don’t do this lightly and this would be the biggest ambulance strike for 30 years.

‘They are desperate. This is much more about patient safety at least as much about pay.’

The union’s general secretary Sharon Graham said: ‘The Unite team negotiated in good faith with Peel Ports. But the talks ended in farce, with the deal agreed between Unite and senior management being pulled by the board.

‘Strike action by our members and with the full support of Unite will go ahead.

‘Peel Ports’ untrustworthy behaviour and its attempts to threaten the workforce are only escalating the dispute.’

‘This is the highest percentage increase of any port group in the UK by far and would see average annual pay rise to £43,275.

‘Given we have now improved our offer six times and Unite have consistently blocked the involvement of ACAS to help arbitrate, you have to question whether the union really wants to resolve this damaging industrial action or is simply prolonging it for their own ends.

‘The fact that they have refused to give all employees an independent postal vote on this 11 per cent offer, free from the pressures and undue influence of an outdated show-of-hands, is very telling.

‘Our feedback from many, many workers is that they are in favour of accepting but are too reluctant to do so in a mass meeting.

‘Meanwhile, the latest two-week strike will cause yet further damage to our customers, the business and the Liverpool City Region, threating even more jobs at the port.

‘It’s wholly irresponsible of Unite to prolong this self-defeating strike. They should have the courage to put this to members and let them have their say.

‘It’s the only way to safeguard as many jobs as possible and implement the most generous pay increase in the industry.’

The series of dockers’ strikes began on September 19, with a week-long strike staged on October 11-17.

Unite said that since then, workers have also been subject to ‘job threats’, when Peel Ports issued redundancy notices to 132 employees, despite plans to expand the port.

This saw the scope of the dispute widened to include jobs and pay.