Legal action and a beating: The efforts to silence ‘Fast’ Eddie Zhi

“Fast” Eddie Zhi has a habit of speaking out about the inner workings of Australia’s meat export industry, and it has apparently made him an unpopular man.

Two years after Australian company Southern Meats appointed him as an agent to help overturn a crippling Chinese government ban on the lamb producer’s export licence, the company in August launched an extraordinary Supreme Court bid to silence him. 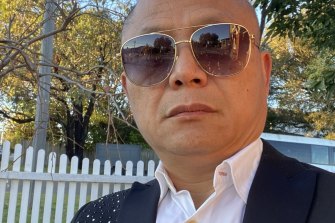 And months before that, in November last year, Mr Zhi was the victim of an unprovoked assault outside his Sydney home.

Mr Zhi suspects the attack was linked in some way to his involvement in the recruitment and supply of Chinese workers to a number of Australian meat companies, but he did not have enough evidence to suggest who might have ordered it. There is no suggestion the attack is connected to his dispute with Southern Meats.

The Age and The Sydney Morning Herald have obtained footage of the attack, which shows Mr Zhi tending his front garden before repeatedly being punched in the head by a younger and bigger man of Asian appearance.

A NSW Police spokeswoman said the force was still investigating the incident and looking to re-establish contact with the man’s accomplice who filmed the assault on his smartphone.

On August 30 this year, Southern Meats applied in the NSW Supreme Court for an urgent injunction to stop Mr Zhi talking. The lawsuit alleged that public statements he had made – including to The Age and The Sydney Morning Herald – about a meeting in Beijing he helped arrange in 2019 with a top Chinese customs official had falsely implied that “corruption” was involved in the arrangement. The legal action was later withdrawn.

The meeting between the official, Wang Gang, and Southern Meats’ general manager was contrary to advice from the Australian government, but weeks afterwards the export licence worth $10 million was reinstated.

Mr Zhi has recently fallen out with others in the industry and provided the Australian Border Force with information about what he claimed was widespread visa fraud in the provision of foreign meatworkers by recruitment agencies. 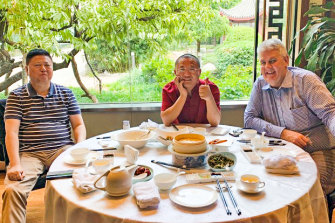 In its written submission to the court in August, Southern Meats accused Mr Zhi of “injurious falsehood” motivated by “personal spite”.

In response, the self-described “wheeler and dealer” prepared an affidavit that included references to voice recordings of his former business partner, David Zhu, allegedly talking about how his official connections in Beijing could assist Southern Meats.

The Age and the Herald revealed earlier this year that Mr Zhu had accompanied Mr Zhi to the meeting with Dr Wang, the senior Chinese customs official, and the meat company’s boss Craig Newton. Weeks later, Southern Meats’ Chinese licence was restored.

Mr Zhu and Mr Zhi later had a bitter falling out after Southern Meats cut Mr Zhi out of a labour supply contract.

On September 15, Southern Meats withdrew its application for an injunction against Mr Zhi, with a lawyer for the company telling the court the company would pay Mr Zhi’s costs.

“The horse had bolted as such,” Mr MacRury said, adding the company was reserving its right to apply for another injunction if necessary.

But Mr Zhi said he was vindicated by Southern Meats’ decision and believed the company was concerned about what other information might have come out in court.

Of his bashing, Mr Zhi said he was disappointed no one had been charged, especially as he and his wife had detained and delivered to police an accomplice of his attacker who filmed the incident on his smartphone.

“So much time has passed. Almost a year, no action,” he said.

Mr Zhi and his immediate family have this year received threats from business rivals in China. In one written message, the China-based boss of a labour supply agency warned Mr Zhi that unless he stopped causing trouble, “you and people around you will need to pay a great price”.

“We businessmen should prioritise harmony. If you continue having actions that are of non-sense, you will face consequences not only to others but also yourself. Please think twice before taking any further action,” the businessman warned Mr Zhi.

Mr Zhi met with his former business partner Mr Zhu and prominent labour supplier Scott Shi in Sydney earlier this year to discuss the attack on him. In an audio recording of the meeting, both men denied any knowledge or involvement in the attack on Mr Zhi.

The Age and the Herald are not suggesting Mr Zhu or Mr Shi had any knowledge or involvement in the incident. Mr Zhu did not respond to questions and Mr Shi could not be contacted for comment.

a, action, And, beating, Legal, th
You may also like: