Moscow: On the same day that President Vladimir Putin gave a nationally televised speech warning the West against threatening Russia, the challenge to his government was on home soil.

Thousands of people protested in cities across the country on Wednesday (Thursday AEST) for the first time in months, responding to the opposition’s call to support jailed Kremlin critic Alexei Navalny as his allies warned that his health is failing and his entire network probably will be outlawed soon. 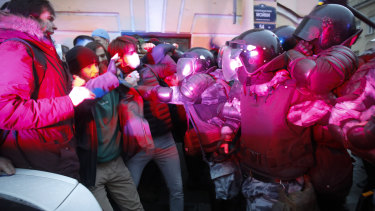 People clash with police during a protest in support of Alexei Navalny in St Petersburg, Russia. Credit:AP

The last time such demonstrations took place – in January and February, shortly after Navalny was arrested – major crowds turned out and more than 11,000 people were detained, according to independent rights monitors.

The Kremlin’s crackdown has grown more intense in the months since, targeting independent journalists, human rights organisations and Navalny’s associates. Wednesday’s rallies, though smaller than the demonstrations earlier in the year, were a show of defiance.

“In our constitution, at the very beginning, it says we have freedom, but in reality we don’t,” said Anna, a 19-year-old student at the protest in Moscow, who like others spoke on the condition that only her first name be used because the demonstrations are considered illegal by authorities.

The government is “stomping on our throats, so we don’t say anything,” she said. 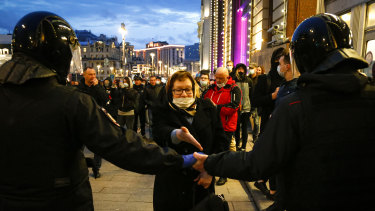 A woman gestures in front of riot police blocking traffic during the opposition rally in support of jailed opposition leader Alexei Navalny.Credit:AP

One independent Russian news outlet estimated that 25,000 people came to Moscow’s demonstration. They chanted “Putin is a thief,” “Freedom to political prisoners” and “Let him go,” in reference to Navalny. Video on social media showed Navalny’s wife, Yulia Navalnaya, in a crowd of protesters chanting her name.

One hour into the rallies in Moscow and St Petersburg, Russia’s two largest cities, more than 400 people had been detained, the monitoring group OVD-Info said.

The protests in Russia’s eastern regions were held as Putin delivered his annual state-of-Russia address in Moscow. In the far-eastern city Khabarovsk, near Russia’s border with China, video on social media purported to show protesters in a square surrounded by armoured vehicles and lines of masked riot police. Putin’s address was broadcast on a giant screen, and the person filming the video said authorities had turned up the volume.

Putin devoted the majority of his speech to promising better times ahead and more government support for Russians facing economic hardships. But he saved his most fiery remarks for the end with a message for the international community: Anyone who threatens Russia “will regret it like they’ve never regretted anything before.” 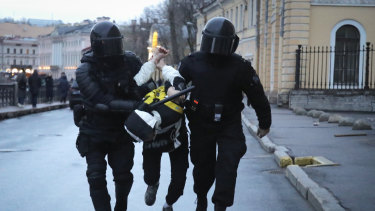 Police detain a man during a protest in St Petersburg, Russia. Credit:AP

His warnings to the West come amid tense relations with Moscow on several fronts.

Russia’s recent military buildup along the Ukrainian border has been criticised widely.

But despite the redeployment of forces around Ukraine, which has been at war with Russia-backed separatists for seven years in the eastern Donbas region, Putin did not announce any new moves, barely referencing Ukraine.

Washington has vowed to support Kiev. The United States imposed economic sanctions on Russia last week in response to a cyberespionage campaign and efforts to influence the US presidential election. On Monday, the Biden administration vowed “consequences” for the Kremlin if Navalny dies in prison.

“We don’t want to burn bridges, but when someone views our good intentions as indifference or weakness and intends to blow up these bridges in turn, they must know Russia’s response will be asymmetrical, swift and harsh,” Putin said on Wednesday.

“I hope no one will cross the red line in regards to Russia. And where this red line will be drawn, we will decide for ourselves,” he added.

Navalny, who returned to Russia in January after surviving a poisoning he said was ordered by Putin, is serving a more-than two-year sentence in a penal colony east of Moscow. He is three weeks into a hunger strike, demanding access to a doctor at his own expense, and his personal physician said Navalny’s health has deteriorated so much that he “could die at any moment.”

On Sunday, Navalny was transferred to a prison hospital in a different penal colony. He said he received a glucose drip.

“I laughed when I read the quotes from the luminaries of medicine, that with such a level of potassium, as in my tests, I should be either in intensive care or in a coffin,” the post said. “You can’t take me that easily.”

Although Navalny’s allies initially said they would announce new demonstrations once their online database reached 500,000 signatures, Navalny’s condition meant they could not wait any longer, a statement on his website said.

“Things are developing too quickly and too badly,” his allies wrote. “An extreme situation demands extreme decisions.”

Prosecutors have requested that Navalny’s network of regional offices and his Anti-Corruption Foundation be added to a list of “terrorist and extremist” groups, clearing the way for the organisations to be banned in Russia, with possible jail time for their members. That means Wednesday’s demonstrations probably will be the last for the group before it’s forced underground.

Two of Navalny’s allies in Moscow who were under house arrest, top aide Lyubov Sobol and press secretary Kira Yarmysh, were detained before lunchtime.

“The detention of supporters of Alexei Navalny in advance of planned protests in Russia today are deplorable,” European Council President Charles Michel tweeted Wednesday. “Authorities must respect the right to assembly.”

Dmitri, a 48-year-old protester in Moscow, said “Russia is in the Dark Ages. In the past 25 years, the country has been completely destroyed.”

He added that he came to Wednesday’s protest because of his two children.

“I want them to live in a good and normal country,” Dmitri said.

Go, him, let, protester, russia
You may also like: