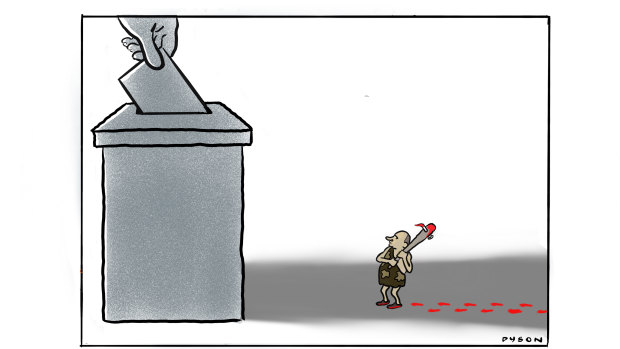 Surely it was the right-wing elements of the Liberal Party that did not appeal to voters. If John Pesutto can bring the party back to the moderate centre, the Liberals will have a better chance next time, especially as there is a good likelihood of ″⁣Dan fatigue″⁣ after 12 years. However, if Jacinta Allen is Labor leader by then, it might be a whole new ball game.
Marie Nash, Balwyn

Forget better ground game, it was the young
No, John Pesutto, Labor didn’t win because of a better ″⁣ground game″⁣. Labor won because most young people did not vote Liberal. They looked long and hard at what you stood for and didn’t like it. As did the majority of Victorians.
Frank Flynn, Cape Paterson

Pesutto has the qualities to bring renewal
Congratulations to John Pesutto for becoming the new state Liberal leader. He has the qualities to renew what has been seen as a fractured and divided party. His vision for the renewal of the party is bold and with his strong leadership as shown by him in the past through his resilience, courage, fortitude and passion can being about the necessary changes and create a strong opposition which is so needed in maintaining any democracy.
Glenise Michaelson, Montmorency

Back to the future leads nowhere
It’s hard to understand the logic of the Victorian Liberal Party. It holds an election for a new leader and who do we have? A new leader who lost his seat in the 2018 state election and only regained it by the barest of margins this year. If this provides stability for the Liberal Party it obviously has a far different way of looking at things than most people.
Bill Walker, St Andrews Beach

This surely is not the centre
Just how “centrist” is the new Liberal leader John Pesutto? Once employed by the right-wing think tank the Institute of Public Affairs, he now welcomes an alleged ultra-religious adherent into the Liberal Party to sit in the party room.
Malcolm McDonald, Burwood

An election victory like no other
Given the terrible effects of the pandemic and the unprecedented hate campaign waged against Daniel Andrews the fact that Labor is poised to exceed the 2018 ″⁣Danslide″⁣ must rate as the greatest and most emphatic election victory in Australia’s political history.
Phil Alexander, Eltham

Not far enough
Federal Labor’s response to Graeme Samuel’s review of the EPBC Act includes positive initiatives such as the establishment of a National Environmental Protection Agency; and the commitment to a “capacity investment scheme” to underwrite clean power projects (8/12) is a practical step towards decarbonising the energy sector.
But these commitments are undermined by Labor’s refusal to deal with the elephant in the room – climate. New laws and initiatives alone will not protect our unique wildlife and places, or the humans, unless we address global warming. If federal Labor is fair dinkum, it must go further and heed the International Energy Agency’s advice to stop approving new fossil fuel projects, cease subsidising fossil fuels by $11.6 billion a year and introduce a climate trigger law to ensure all relevant projects are assessed for their climate impact.
Matilda Bowra, Fitzroy North

Ancient bigotries
Samantha Selinger-Morris’ article ″⁣My silence stops at Kanye West″⁣ (9/12) is timely but reflects nothing new about the very ancient need to scapegoat others. When I was a little girl, my father Simcha (meaning ″⁣joy″⁣ in Hebrew), took pleasure in telling me about the experience he had as a little nine-year-old boy growing up in pre-World War I Poland. When asked by non-Jewish schoolboys to take off his hat to show them his horns, he replied: ″⁣And would you also like me to pull down my trousers to show you my tail?″⁣ This story never left me and told me much about the world then, and now.
Jan Epstein, North Carlton

Ignorance goes West
How ignorant is Kanye West? (Comment, 9/12) Has he ever watched Hitler’s reaction to Jesse Owens’ victory in the 100 metres at the Berlin Olympics? If he did, he would realise that there is a sad irony about his admiration for the evil dictator: that is, that he may very well ″⁣like″⁣ Hitler and even go as far as to defend him by claiming ″⁣he didn’t kill 6 million Jews″⁣, but it’s certain that Hitler wouldn’t have liked him. Indeed, he would have viewed him along with the rest of the ″⁣Negro″⁣ race as degenerate untermenschen, who were to be denied German citizenship, many of whom were to be detained, sent to concentration camps and even murdered.
Ivan Glynn, Vermont

Applause, please
I walk past the South Melbourne Town Hall most days and it breaks my heart to see this iconic building so diminished, decrepit and locked up.
In the wake of the 2018 roof collapse it was clear that this gutted building needed to be saved.
Further to the article (9/12) the local community should be celebrating the fact that a not-for-profit, world-class music academy, not a corporate behemoth, or a giant hotel chain, is committed to saving the building, indeed breathing life and vitality back into its community.
The plans submitted show a vision, together with funding, to restore this historic town hall. The Australian National Academy of Music should be applauded.
Janette Brown, South Melbourne

Let the music begin
ANAM’s plans indicate a desire to throw open the doors of the South Melbourne Town Hall to welcome everyone in, rather than let it go the way of so many other inner-city town halls, hosting rug sales and computer swaps. As an Albert Park resident and a music lover, I can hardly wait for world-class music to return to South Melbourne. And as general manager Nick Bailey clearly states, there is room for all.
Lee Palmer, Albert Park

Take the transition
Could someone please explain why subsidies continue to be given to the fossil fuel industries in Australia? If they are not needed any more, apart from increasing companies’ profits, it is possible that those subsidies could be spent on the transition to renewables?
Jenny Callaghan, Hawthorn

No one worth this much
If the rumoured $313 million, 2-year deal by the Saudi Arabian soccer club Al-Nasser for Ronaldo is true, it must rate as one of the most obscene financial contracts ever. I am happy to acknowledge the brilliance of Ronaldo as a soccer player but at the age of 37 his best playing years are behind him. Regardless, how can a pay packet of over $340,000 a day to anyone be justified?
Tony Wheeler,
Templestowe Lower

Disappointing Kyrgios
Nick Kyrgios’ comment, “at this point in my career I will always do what’s best for me” (9/12) is very disappointing. No giving back for Kyrgios to Tennis Australia and the Australian tennis-loving public by doing what is the right thing as our number one player. Playing Davis Cup. Surely the greatest tennis honour of all. Let’s hope with some self-reflection he sees that playing Davis Cup in the future is indeed what’s best for him.
Mandy Morgan, Malvern

This country’s failure
Today commemorates the 75th anniversary of the Universal Declaration of Human Rights. Every day millions of people are denied many basic human rights. It is in the right to seek asylum that Australia has failed thousands of people identified as genuine refugees.
We have incarcerated them in detention for many years. Many thousands struggle daily in our communities on temporary protection visas. We have contributed to the breakdown of many in their mental and physical health. The time has come to give them permanent protection and dignity, so they can rebuild their lives as is their right. Australia, having signed the Refugee Convention, has a moral duty to uphold that Convention.
Judith Morrison, Nunawading

Wrong priorities
Every day a community service or advocacy group declares that they desperately need more government funding. All these services, including health, NDIS, education, welfare and poverty relief are worthy causes. The money to pay for them has to derive from taxes, innovation and efficiency measures and good management. Clearly, business is not pulling its weight and is projected to pay proportionately even less in a decade. Closing tax loopholes that allow the rich to become ever richer is essential.
We can either move to the balanced Scandinavian system or keep heading down the path to the immense wealth disparity and social dislocation we see in America.
Peter Barry, Marysville

Misguided Batman
Spot on Bryan Fraser (Letters, 9/12). John Batman should have taken one look at the area around the mouth of the Yarra, said, ‘You have to be joking’, hopped back into his boat, travelled another couple of thousand kilometres east and north to find a location fit for human habitation and left this frigid, icy windswept swamp to the wallabies, the wombats and the tiger snakes.
Helen Moss, Croydon

Love’s presence
I discovered that my parents were the givers of Father Christmas presents when I heard a noise as they wrapped a board game that had marbles in it. (I should have been asleep.) Years later I told them that the revelation had made Christmas much more special. My mother’s reply was, ″⁣That was a year when we could afford very little″⁣. Eighty years on, that poignant comment and the memory of the Paddy McGinty’s Goat game are still precious reminders of love.
Lorraine James, Burwood

Santa tales
My brother has a better Father Christmas story than mine. I woke to see Father Christmas wearing my father’s dressing gown and I pretended I was asleep.
My brother woke to see our father standing at the end of his bed and my quick-thinking father said that he was just checking to see if Santa had been.
Susan Munday,
Bentleigh East

Politics
Congratulations and good luck to John Pesutto. I hope he will have more success in taming the right wing of the Liberal Party than did Malcolm Turnbull.
Kevan Porter, Alphington

It looks like the Liberals have realised that copper coins are no longer in circulation.
John Mosig, Kew

If Donald Trump were the leader of the opposition in Victoria, he would be demanding a recount because Andrews won an extra seat.
Bruce Dudon, Woodend

Thank goodness that someone is going to at least polish the jewel in the crown in the City of Port Phillip.
Geoff Gowers, Merricks North

When Nick Kyrgios plays for Australia I barrack for the opposition anyway.
Ralph Frank, Malvern East

In saying that Russians would “defend ourselves”, President Vladimir Putin confirms that truth is the first casualty of war … sorry, of a ″⁣Special Military Operation″⁣.
John Hughes, Mentone

David Warner, when you desecrate the most noble of Australian sporting icons, the punishment is life. The baggy green is not for sale. Never has been and never will be.
Andrew Dowling, Torquay