THIS is the moment a lion was taken down after going head to head with a buffalo in a brutal HOUR-LONG fight to the death.

The stunning pictures shows the two huge animals face off in a truly ferocious battle, with the bloodied feline eventually toppled by its stronger counterpart. 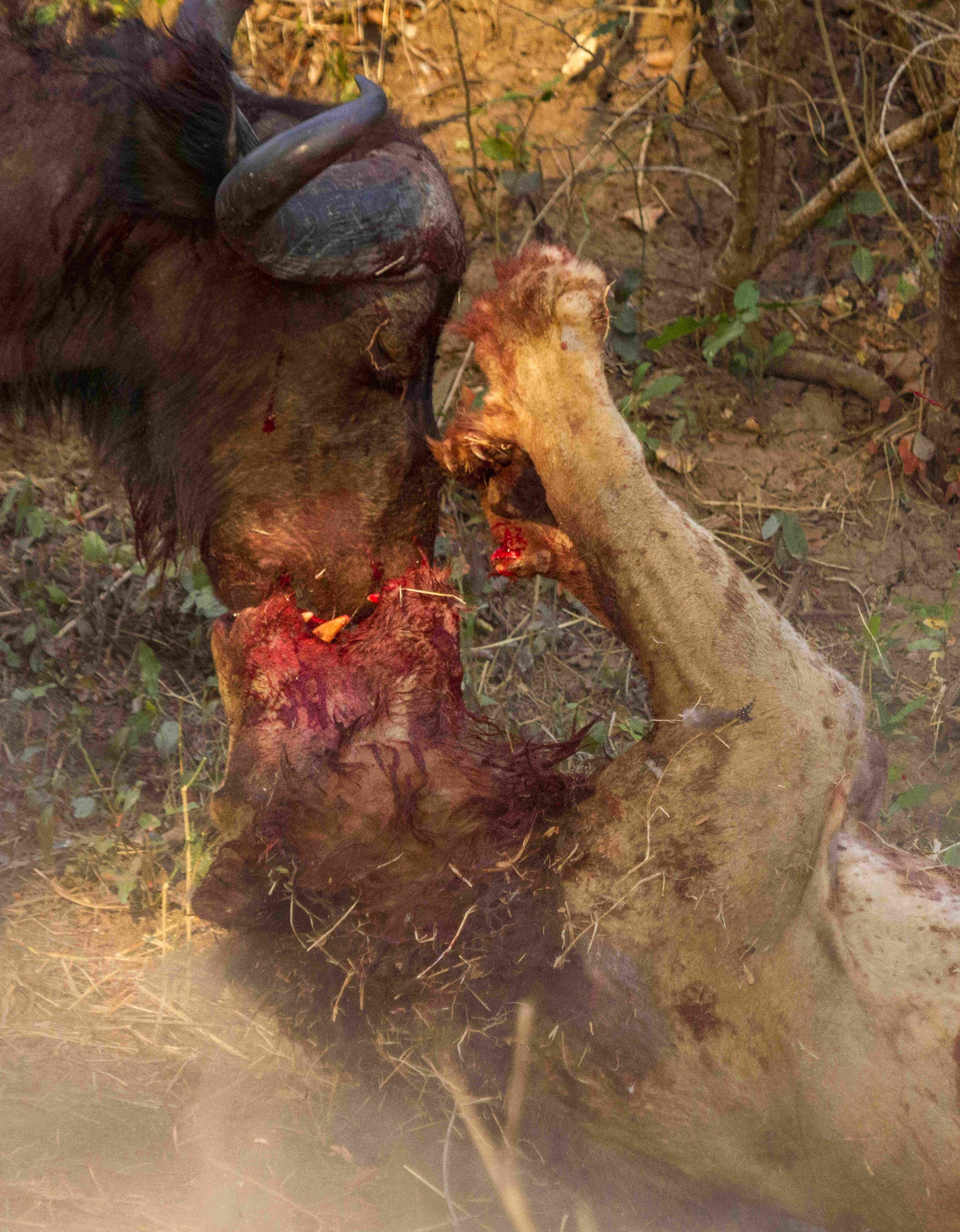 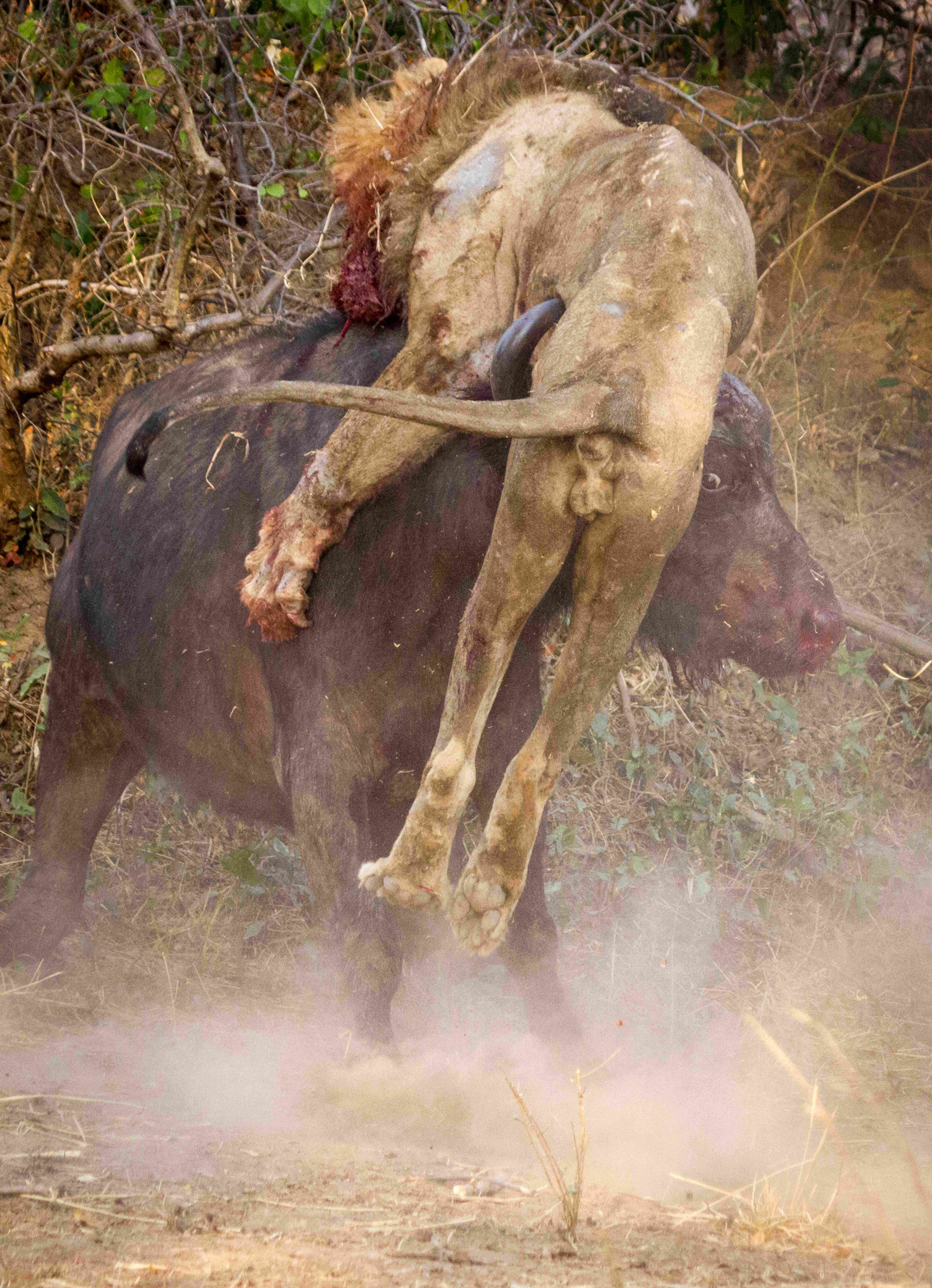 The images were taken in the South Luangwa National Park, Zambia by a photographer stood just 100 foot away as the prdeators fought away.

In one image, a 420-pound lion clung onto a 1,900-pound buffalo, sinking its claws into the animal’s hide whilst being impaled by the buffalo’s horn in the process.

In another, the bloodied lion then lays on the floor in defeat as several of the buffalo gathered around him.

The 31-year-old photographer Matt Armstrong-Ford, described the battle as a “boxing match between two heavyweights. ”

He recollected: “When we arrived, we saw the lion with its jaws clamped around the buffalo’s muzzle.

“For the next hour or so, the two would go at each other in two to five minute intervals and in between that, they’d just stare – waiting for the other to make a move.”

“Eventually, with both animals at the point of total exhaustion, a large bull emerged from behind the bushes and with a powerful blow to the lion, put an end to the proceedings.”

To the amazement of onlookers the lion did not die right away and managed to successfully hunt that night. 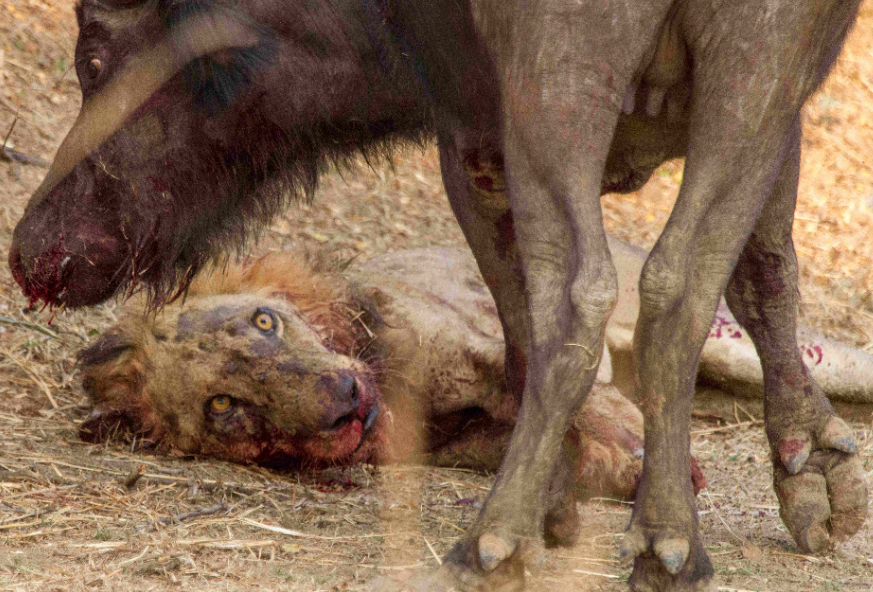 However, he was found dead a few days later from a suspected hyena attack.

The Scotsman, who is from the Isle of Bute, added: “It was exhausting and incredibly emotional, especially as the lion was known to us.

“I don’t think anyone took a single breath throughout the encounter. It was draining emotionally and mentally.”

Male buffalo horns fuse together creating a tough shield which is known as a ‘boss.’

Some also refer to them as ‘black death’ or ‘widow makers’ as they reportedly trample or kill around 200 people a year.

As a result, they are considered to be one of the most dangerous animals in Africa.

Mr Amstrong-Ford concluded: “I hope that people see the images and understand the hardships of the animal kingdom, let alone the addition of having to deal with countless other human influences.

“These images show that, if we let her, nature will survive and thrive in her endless cycle of life and death and will continue to find her own balance for many millennia to come.”

buffalo, by, killed, lion, one-ton
You may also like: