Liz Truss last night vowed to protect the Rwanda immigration scheme with UK laws in a bid to block challenges to the controversial plan.

The Foreign Secretary used a TV interview to cement her lead over Rishi Sunak by promising to take Britain’s immigration policies back into the government’s hands.

She also pledged to strike Rwanda-style deals with more countries and to take a hard line on the French, who she said were not doing enough to stop migrants at the borders.

In the one-hour programme – The People’s Forum on the GB News TV channel – Miss Truss fielded questions from a live studio audience, Daily Mail readers and viewers on subjects including slashing VAT, the cost-of-living squeeze, education and housing. 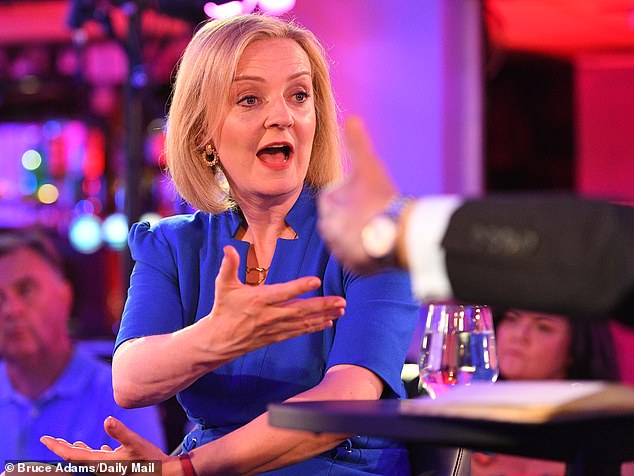 Foreign Secretary Liz Truss last night vowed to take back control of Britain’s immigration system if she is elected leader of the Conservative party by its 160,000 members 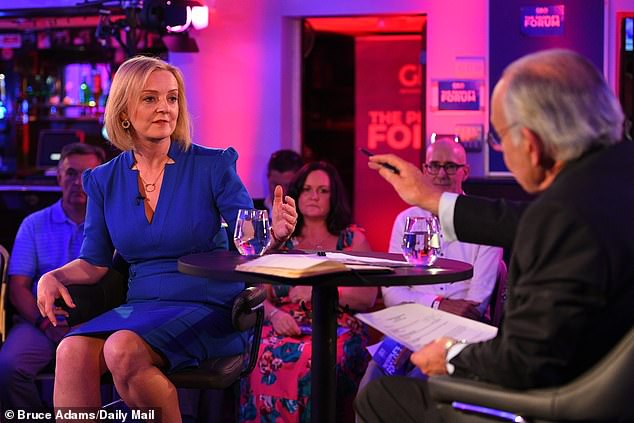 During the interview in Leigh, Greater Manchester, Miss Truss took aim at those attempting to stop the Rwanda scheme from going ahead – and pledged to keep Britain’s borders safe 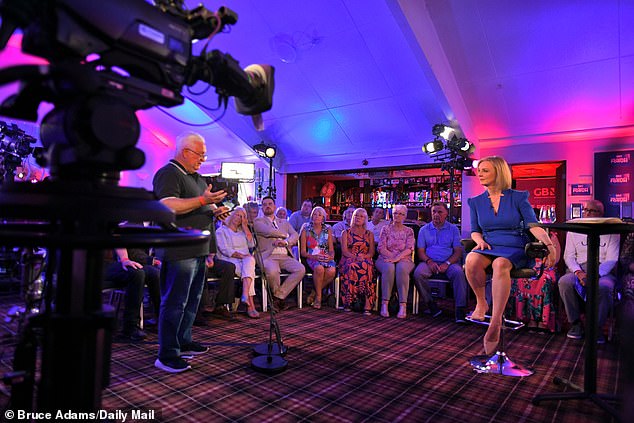 During the interview in Leigh, Greater Manchester, Miss Truss took aim at those attempting to stop the Rwanda scheme from going ahead – and pledged to keep Britain’s borders safe.

She said she would bolster the current policy and ensure Britain can no longer be overruled by the European Court of Human Rights (ECHR). Asked by an audience member about her plans for immigration if she became prime minister, Miss Truss condemned the ‘appalling’ criminal operation by people traffickers in the Channel.

‘What I would do if I’m elected as your prime minister is make the Rwanda policy work through the British Bill of Rights, ensuring that we can’t be overruled by the ECHR because we know that’s been a problem … and that stopped the policy going ahead.

‘So, I would make sure we legislate for Britain, that we are in control of our own policy, and we can’t be overwhelmed by the ECHR.’

She added: ‘I would also work with other countries to get new deals to find new locations.’ Britain has paid £120million up front to Rwanda as part of a deal in which migrants who cross the Channel in small boats are flown to the country. But the first flights have been grounded until late autumn at the earliest after European judges upheld a legal block.

The Strasbourg-based ECHR has said removals cannot take place until UK courts have conducted a full judicial review of the policy.

The Bill of Rights, which is currently going through Parliament, says ‘no account is to be taken of any interim measure issued by the ECHR’. Rishi Sunak has vowed to keep Boris Johnson’s flagship policy, despite sources claiming he tried to block the scheme when he was chancellor.

An audience member described the French government as ‘completely uncooperative’ on immigration, to which Miss Truss replied: ‘You don’t say’. She later responded to Daily Mail reader, Penny, by saying: ‘The French are not putting enough staff on the borders at Dover to deal with the long backlogs and I will be very clear and robust in my negotiations with the French.’

Questioned over the growing cost-of-living crunch, Miss Truss said she was willing to launch an emergency budget to ensure that the public got the right support as soon as possible, pledging to do ‘everything I can’ to support hard-pressed families.

Although the Foreign Secretary was clear that she believes it is essential to keep taxes low, she did not rule out giving struggling Britons further cash payments to help with winter energy bills.

Miss Truss also pledged to make the housing market more accessible for young first-time buyers, crack down on grooming gangs – and said she would ensure police do not spend more time monitoring social media than the streets.

Notably, she said she didn’t want her Cabinet to ‘spend their time briefing the press and talking to the press’, a possible dig at Mr Sunak following claims he ‘stabbed’ Mr Johnson in the back.