Liz Truss is expected to meet Joe Biden and other world leaders for private talks before the Queen’s state funeral next week.

The US president and Emmanuel Macron are among the senior figures due to fly into London for the ceremony on Monday.

It is understood several leaders have requested meetings with the PM, who only took charge in Downing Street last Tuesday.

However, as a mark of respect to the former monarch no details or photographs of their discussions will be released, and there will be no press conferences.

Meanwhile, Tories have been voicing anger over China being invited to send a representative to the state funeral.

Vice-premier Wang Qishan is expected to attend, despite the country’s ambassador being banned from the Houses of Parliament after Beijing sanctioned a group of MPs. 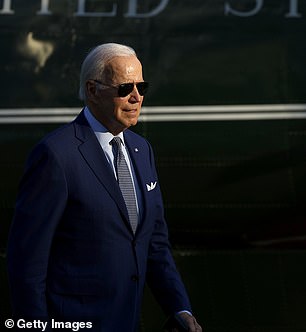 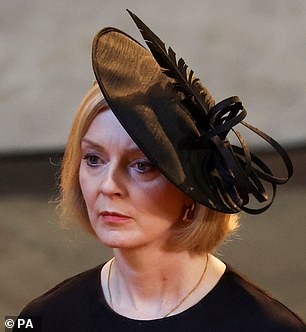 US president Joe Biden (left) is among the senior figures due to fly into London for the state funeral on Monday. It is understood several leaders have requested meetings with Liz Truss (right) 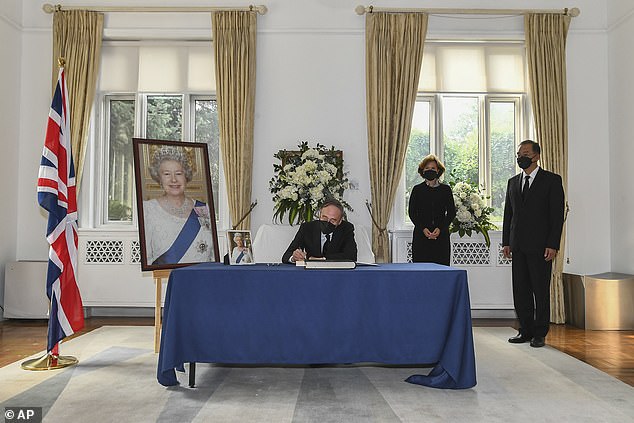 Former Cabinet minister Iain Duncan Smith told Politico: ‘How can they ban Belarus, Russia and Myanmar and not say no to China?

‘They have a huge record of human rights abuses, including what we believe to be genocide, smashing churches and persecuting Christians.’

Mr Macron said he spoke to the King yesterday to offer his and his country’s condolences, and will be at the funeral.

The event will see several hundred dignitaries from around the world in London to pay their last respects to the Queen, in what is set to be one of the biggest logistical and diplomatic events in the UK in decades.

They will join members of the royal family, British prime ministers past and present, and key figures from public life at Westminster Abbey – which can hold about 2,000 people – at 11am on Monday.

No guest list has been released yet, but Mr Biden was among the first to declare he will be attending with his wife, Jill.

The leaders of most Commonwealth countries are expected to attend, with New Zealand Prime Minister Jacinda Ardern saying she will make the nearly 24-hour journey with a delegation of five others.

Mr Macron said he spoke to the King yesterday to offer his and his country’s condolences, and will be at the funeral

Her Canadian and Australian counterparts, Justin Trudeau and Anthony Albanese, have also confirmed their presence.

Mr Albanese announced that he will not be travelling alone, tweeting that at Buckingham Palace’s invitation, he and Governor-General David Hurley will be accompanied by ’10 Australians who have made extraordinary contributions to their communities’.

King Felipe of Spain and his wife, Queen Letizia, are among the European royals who will attend.

Emperor Naruhito of Japan is also expected to travel to London in what would be his first overseas trip since ascending the throne in 2019.