Most Australians would have been blissfully unaware of the large and angry crowds gathering on the streets of Melbourne and Sydney on Saturday afternoon.

It wasn’t until the protests turned ugly that the images and footage spread like wildfire on social media. News websites and TV bulletins completed the picture. At best, an unedifying and poorly executed event; at worst, a display of misguided defiance that defeated the entire point the protesters were trying to make.

The premiers of NSW and Victoria spoke for the vast majority of their citizens who are enduring harsh lockdowns when they reacted to the protests on Sunday morning.

“Can I say how absolutely disgusted I was. It broke my heart,” NSW Premier Gladys Berejiklian said. “Millions and millions of people across our state are doing the right thing and it just broke my heart that people had such a disregard for their fellow citizens.”

Victorian Premier Daniel Andrews was equally appalled: “We can’t vaccinate against selfishness, and these people should be ashamed, absolutely ashamed. It’s just wrong.”

In joining the widespread condemnation of the protesters, Prime Minister Scott Morrison described their behaviour as reckless and selfish. 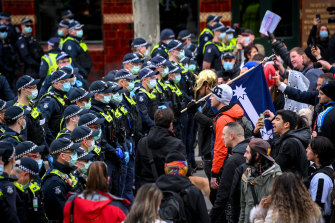 Police and protesters come face to face in Melbourne on Saturday.Credit:Eddie Jim

The protests were particularly reckless considering what we know about the Delta variant – contact tracers have established it can be passed on at the crowded entry gate of football games, or in the stands as people shout support for their team. It’s for this reason that the Olympians in Tokyo were forced to wave at empty stands at a pared-back opening ceremony and are enduring eerie silences at their events.

But thousands in Sydney and Melbourne chose to ignore all that, voluntarily attending their own potential super-spreading event. If that’s what these protests become, it would probably delay, not hasten, the thing the protesters – in common with all of us – crave, namely “freedom”.

“We don’t want a setback, and yesterday could have been a setback – time will tell,” Ms Berejiklian said. “We rely on people not only to do the right thing but not to openly threaten the health and safety of the broader community. I hope it won’t be a setback, but it could be.”

Mr Andrews agreed, saying, “Everyone is entitled to an opinion, but not entitled to put other people in danger. And that’s what yesterday was about.”

We all grumble about lockdowns. We might have lost income, time at school, contact with families, the ability to go to weddings or funerals. We’re required to endure the inconvenience of masks. We might, as too many are, be suffering psychological harm from the isolation and uncertainty that lockdowns bring.

To that extent, we can understand the frustration of the protesters. But what should concern us is that, in our community, so many do not believe in the existence of the virus at all, or do not believe in vaccinations against it, or believe that, somehow, our governments are conspiring against us. That so many should be prepared to risk harm to themselves and others to “prove” those points is alarming and disappointing.

Chanting for freedom will not achieve freedom. Abusing the police, hitting a police horse, will not speed our exit from the threat of COVID-19. It will not hurry the all-too-slow vaccination process. It will not magically render the Delta variant less infectious, or the coronavirus generally less harmful.

If we needed reminding of the importance of that, the death from COVID-19 announced on Sunday of a woman in her 30s – a woman who had no other underlying health conditions – should ram home the message.

The quickest way to ensure our freedom is for as many of us to get a vaccine as possible – something at least a proportion of Saturday’s crowds were dead against.

Saturday’s protests were, in The Age’s view, wrongheaded in the extreme. The situation we are in is hard and frustrating for everyone, but if this virus is teaching us one thing again and again, it’s that we must really be all in this together if we are to defeat it.