London Indian variant cases soar 80 per cent in one week

LONDON has seen an 80 per cent rise in cases of the Indian variant in one week.

The numbers are relatively small, but it shows how quickly the virus has been able to spread between people. 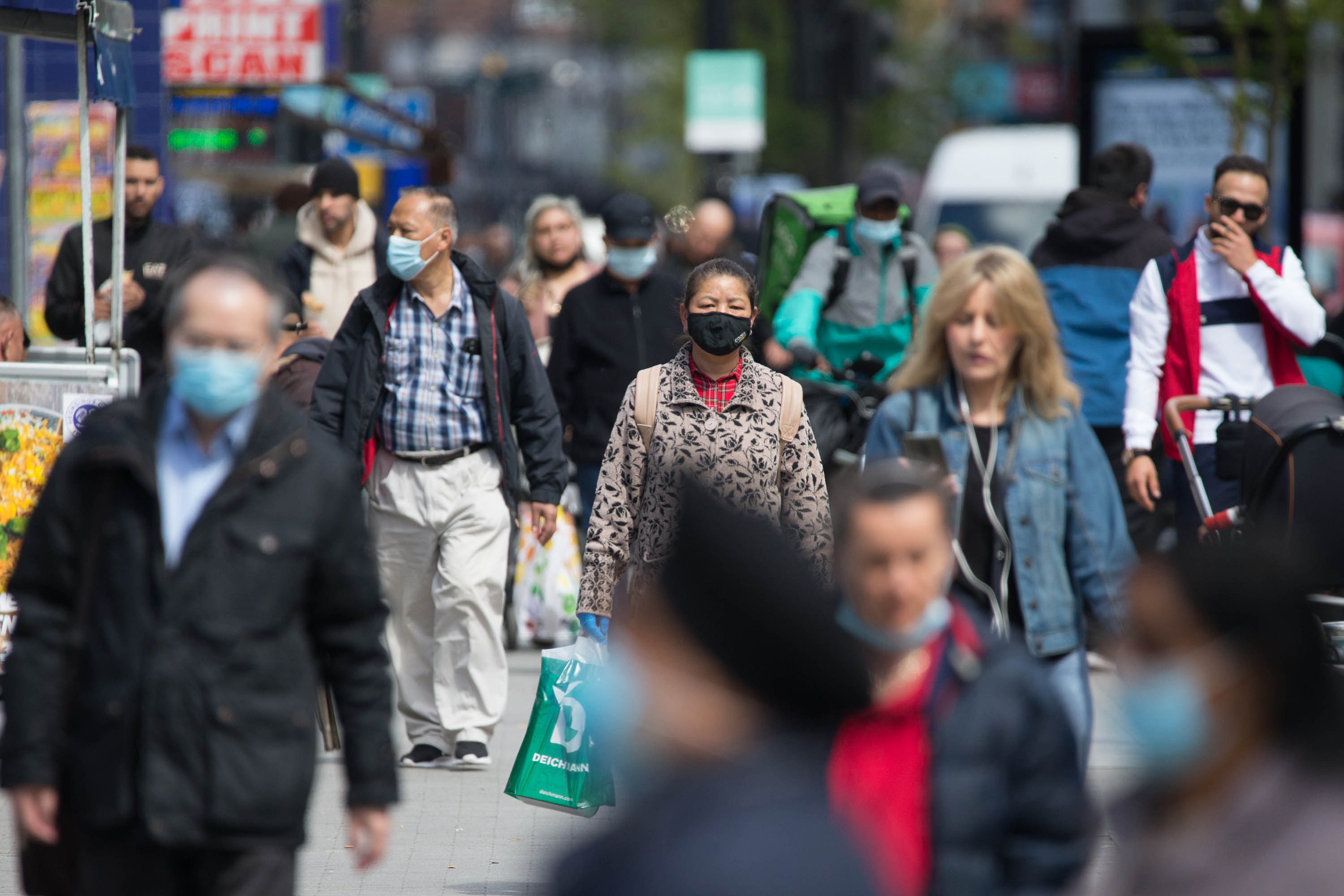 The variant B.1.617.2 has only been in the UK for a matter of weeks, and is already becoming dominant in some areas – including Hounslow, London.

Public Health England revealed yesterday that now 3,424 cases have been detected, up from 2,111 the previous week.

A breakdown by region reveals there have been 720 in the capital alone, up from 400 last week, according to the Evening Standard.

The B.1.617.2 cases in London are believed to be largely caused by people returning from India to the UK and then passing Covid onto their close contacts, the paper reports.

If this is contained to just those close contacts by NHS Test and Trace, it’s hoped it will not spread too much within the community.

Some parts of London are being clamped down on with surge testing to find more cases and limit the spread.

It includes Hounslow, where the case rate per 100,000 people is 51 – the highest of any London borough and the sixth highest in England.

Hackney, which is also part of the testing blitz, has a case rate of 9.3 compared with England's current hotspot Bolton, where the infection rate is 341.5 per 100,000 people.

Other hotspots of the Indian variant are in Blackburn with Darwen and Bolton, and PHE said there were “clusters of cases” across England.

People living in these areas have been warned not to be complacent, to take the vaccine if eligible and remember "hands, face, space, fresh air". 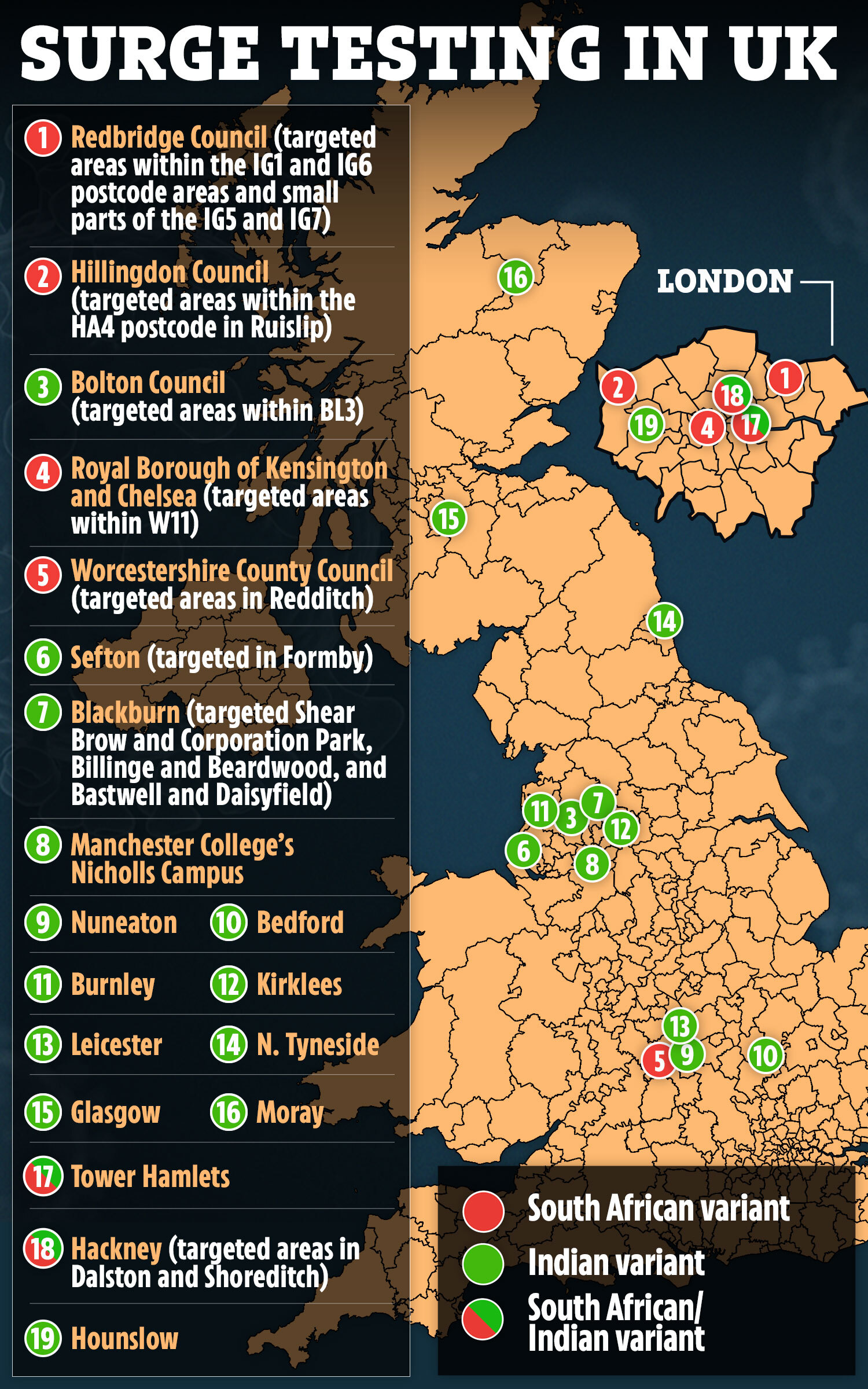 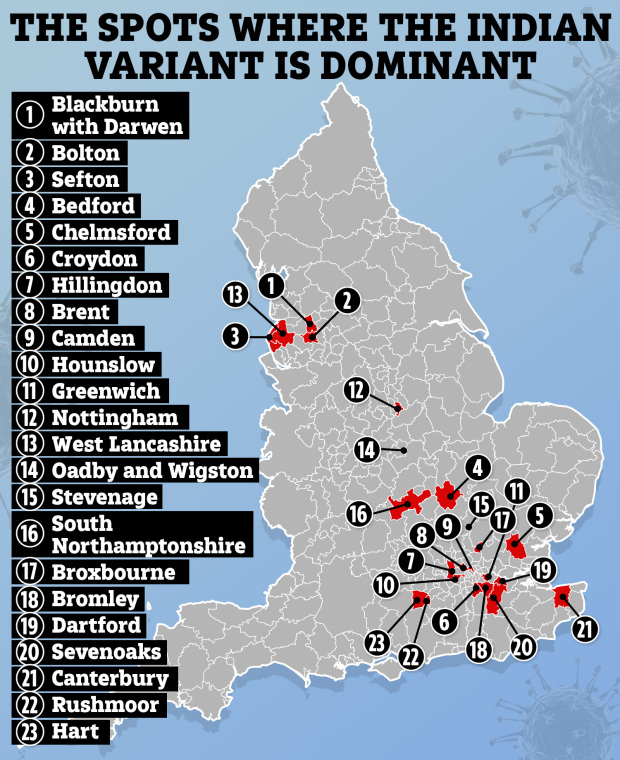 What is the Indian variant?

There are in fact three variants that are from India that emerged in the UK around mid-April.

PHE says there are almost 3,500 cases that have been identified in the UK since around mid-April.

The true numbers are likely higher because there is a lag period with detecting cases.

And only half of all positive swab tests are checked to see which type of variant they were caused by.

In England, infections are spread across the country, but there are hotspots which are now receiving surge testing.

The B.1617.2 variant is now believed to be the dominant strain across 23 areas in the UK.

Case numbers are still relatively small. But scientists say it is the speed at which the numbers are growing that is of concern.

Sage – the scientists that advise Government – believe the Indian variant could be up to 50 per cent more easily spread than the strain from Kent.

The Kent variant put England back into a third national lockdown because it spread so much faster than the original strain from Wuhan, China.

It could infect those who are unvaccinated – currently a third of the population – or vulnerable people who have not been able to get the jab or for whom the jab does not work for.

But both the Health Secretary and Prime Minister say the data shows there is the jab should work against the new variant.

London mayor Sadiq Khan has called for younger people to get their vaccines earlier.

He asked Health Secretary Matt Hancock and Vaccines Minister Nadhim Zahawi for the “flexibility to give younger people the vaccine in those parts of London concerned about this strain”.

Mr Khan told Sky News on Monday that “what we are saying is be nimble in those pockets where we know there is an issue – let’s use the vaccine sensibly”.

Prof Adam Finn, from the Joint Committee on Vaccination and Immunisation (JCVI), said because of the delay in aquiring immunity after a jab, any action taken now will have a limited impact on the spread right now.

It comes after a report claimed spread of the variant had been fuelled by failures in NHS Test and Trace.

For three weeks in April and May, eight local authorities in England did not have access to the full data on cases in their area, a report seen by the BBC revealed.

Although those patients were told that they had Covid via testing, the contact information of their friends and family were not obtained by the NHS Test and Trace.

One of the areas is was Blackburn with Darwen, Lancashire, which now has has the second highest Covid rate in England.

Local leaders said the tech glitch had "had an effect on the residents" while a report said the "rapid spread" of the Indian variant may have been exacerbated by the contact tracing failure.

The Government said the problem was "quickly resolved" and denied it was a single factor that spurred spread of the variant.

Meanwhile, a completely new Covid variant has emerged in Yorkshire and the Humber, PHE said yesterday.

It has been temporarily named AV.1 and spotted 49 times so far.

Nothing is yet known about the mutated coronavirus strain, which has been designated a "variant under investigation".

cases, Indian, London, So, variant
You may also like: