Follow
Home » World News » London night tube map: What is it and what lines stay open? – The Sun

London night tube map: What is it and what lines stay open? – The Sun

LONDON's 24-hour transport network is back on the Central and Victoria lines.

Here's all you need to know about the night tube. 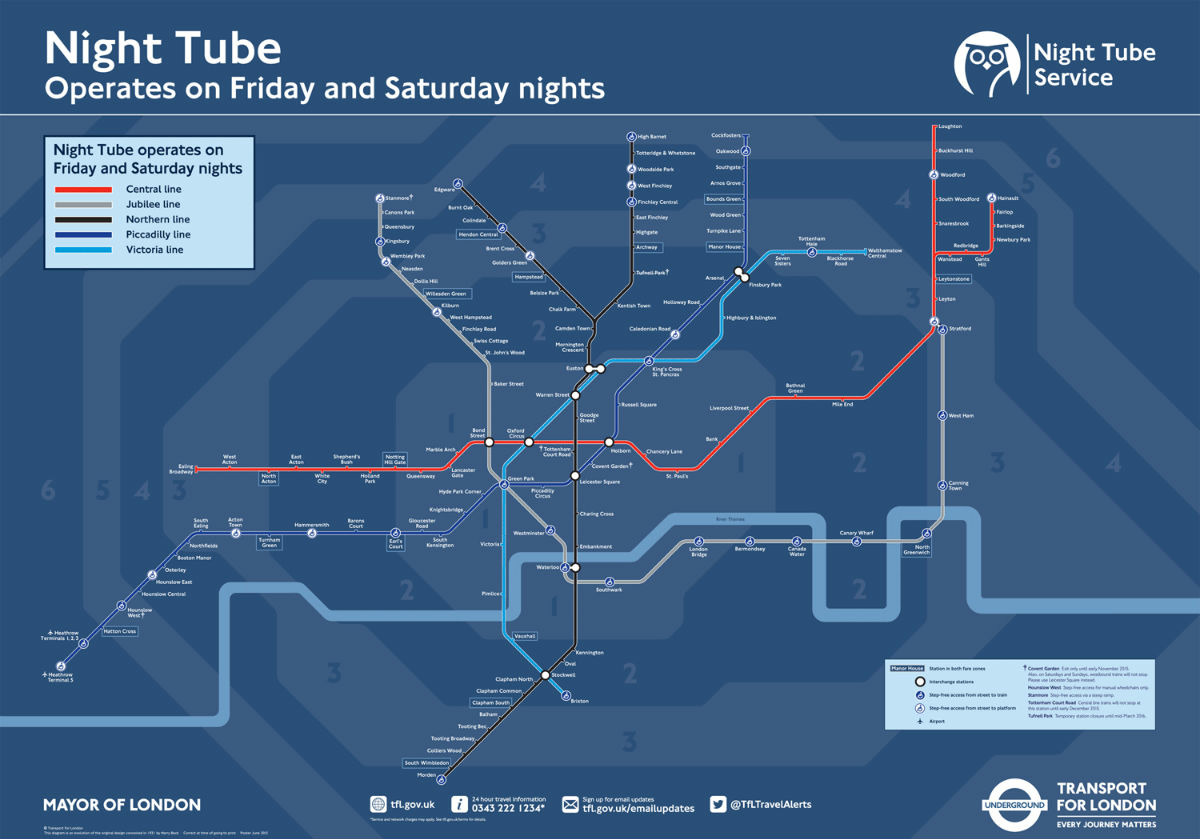 What is the night tube?

The night tube is the metro in London that runs throughout the night on certain days and lines.

Former Mayor Boris Johnson's brain child was held back by a year as the Rail, Maritime and Transport Union (RMT) clashed with TfL over pay and conditions.

But the project took off in 2016 and after a staggered start all five proposed lines are running all-night services for Londoners on the weekends with the London Overground now set to join them.

The first lines to take on the 24-hour service were the Central and Victoria lines on August 19, 2016.

Services were then launched on the Northern line and the Piccadilly line joined the network in.

And in July, 2017, it was announced the London Overground, also referred to as the Orange Line, will operate all night on Friday and Saturdays between New Cross Gate and Dalston Junction – with the service to then be extended to Highbury & Islington in 2018.

The Northern line ran a 24-hour from Morden via Camden Town and on to Edgeware/High Barnet with no service on the Bank or Mill Hill East branches.

Piccadilly line ran between Cockfosters and Heathrow Terminal 5 with no services on the Terminal 4 loop or between Uxbridge and Acton Town.

TfL said they "plan to expand the night time service to parts of the Metropolitan, Circle, District, and Hammersmith & City lines once our modernisation programmes are complete”.

Since the pandemic when the Night Tube stopped, only the Central and Victoria have been announced to make a come back. The Jubilee, Piccadilly, Northern and Overground lines have not returned yet.

What lines are on the Night Tube and how regular are the trains?

Northern line – trains run on average every 8 minutes between Morden and Camden Town and approximately every 15 minutes from Camden Town to High Barnet / Edgware. Night Tube services will not stop at Charing Cross until July 2017. No service on the Mill Hill East and Bank branches

Piccadilly line – trains run on average every 10 minutes between Cockfosters and Heathrow Terminal 5. No service on the Terminal 4 loop, or between Acton Town and Uxbridge

London Overground – trains will run between New Cross Gate and Dalston Junction, before being extended to Highbury & Islington in 2018

How regular are the trains?

Victoria line services run every 10 minutes between all stations.

No night tube services run between Loughton and Epping, Woodford and Hainault or North Acton and West Ruislip.

Jubilee services run at 10 minute intervals calling at all stations.

Piccadilly line trains between Cockfosters and Heathrow Terminal 5 are also expected to run every 10 minutes.

Northern line services run at eight minute intervals between Morden and Camden Town and every 15 minutes on from there to High Barnet/Edgware.

Normal off-peak fairs apply across the service with day travelcards valid until 4.29am the day after purchase.

There is also staff on hand at all stations while the service is in operation to assist passengers.

Additionally TfL has said there is "an enhanced policing presence during the overnight services", as more than 100 cops have been deployed to patrol the 144 stations that will stay open through the night each weekend.

City Hall believes the Night Tube provides a boost of over £70million a year to London's economy, as well as supporting approximately 2,000 jobs.

Mayor of London Sadiq Khan said: "Our Night Tube services have been a real success right across the capital, so I'm delighted to announce that we'll be bringing the night Overground to the East London line later this year.

Is the Night Tube safe?

is, London, map, night:, Tube, what
You may also like: