Tragic end of the loneliest man in the world: His Amazon tribe was fatally poisoned. And for 26 years he survived alone, firing arrows at intruders and hiding in 10ft holes he dug. Now he has been found dead covered in macaw feathers, writes TOM LEONARD

Some called him ‘the Man of the Hole’ thanks to his fondness for digging deep holes in the ground in the Amazonian jungle — where he would apparently trap prey and hide from his own predators.

But his other name — the World’s Loneliest Man — was even more fitting. He spent half his life entirely alone with all his friends and family dead — while doing his utmost to avoid their fate and to remain invisible in the rainforest.

Anyone who came too close to him could find themselves at the sharp end of his bow and arrow — or he’d simply disappear into the almost- impenetrable foliage.

Nobody even knew the name of the man or the language he spoke.

And nobody ever will — because the World’s Loneliest Man has died: the last-surviving member of an isolated Amazon tribe that had avoided almost any contact with the outside world.

His decomposing body — he was thought to have been about 60 — was found in western Brazil on August 23 near the Bolivian border. 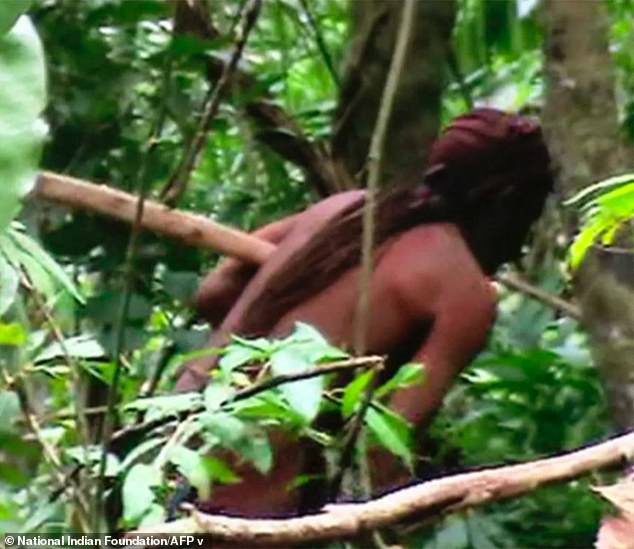 The World’s Loneliest Man (pictured in 2011), who spent half his life entirely alone in the Amazonian jungle, has died. He was thought to have been about 60. He was found in a hammock outside a straw hut with bright macaw feathers laid over his body

Officials from the Brazilian Government’s Indian Affairs agency (FUNAI) had been quietly monitoring him from a distance in the Tanaru indigenous area in the state of Rondonia.

For at least the last 26 years of his life, he was entirely without company. But even though he died — as he had lived — alone, lying in a hammock outside a straw hut, he appeared to know his end was coming as he had laid bright macaw feathers over his body. 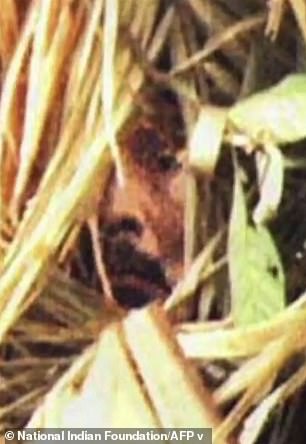 He was the last-surviving member of an isolated Amazon tribe that had avoided almost any contact with the outside world. Anyone who came too close to him could find themselves at the sharp end of his bow and arrow — or he’d simply disappear into the almost- impenetrable foliage.

Macaw feathers are a sign of fertility and healing in indigenous cultures, so perhaps in his final hours he was trying to cure himself of an illness. Or maybe he wanted his most valuable possessions around him as he died.

‘He was waiting for death, there were no signs of violence,’ said Indigenous expert Marcelo dos Santos.

The man’s peaceful passing — the government says he died of natural causes — is in stark contrast to the fate of other members of his tribe.

Most of them are believed to have been killed in the 1970s and 1980s by greedy ranchers intent on expanding into the jungle — in what the London human-rights charity Survival International described as a ‘secret genocide’.

Ranchers had cruelly poisoned his tribe by leaving out sugar laced with rat poison.

And his complete isolation began in the 1990s, when the final six or so remaining members were shot dead.

The charity’s research director Fiona Watson said: ‘One can only imagine what this man was thinking, going through, living on his own, not able to speak to anybody and I think very frightened because any outsider for him represented a threat, given his terrible experience.’

In 1996, a cameraman accompanying FUNAI officials captured a rare glimpse of the man on film: his frightened eyes staring out from a straw hut where he was hiding next to a fire. He made no sound, even as he poked a sharpened wooden stick through the hut wall to scare off the visitors.

‘We tried to establish a conversation and offered corn and arrows, but he was terrified and very aggressive,’ said Marcelo dos Santos, who led the expedition.

‘From this moment on, we had to respect his isolation.’ Over the years, FUNAI teams entered his territory with members of neighbouring tribes to determine what language he spoke and to learn more about him. However, the man made clear he wanted nothing to do with anyone, once seriously wounding a FUNAI visitor by shooting them with an arrow.

Since then, researchers had given him a wide berth and restricted their visits to simply checking he was still alive.

The only other known footage of him was captured in 2018 when — during a chance sighting in the jungle — the muscular man was seen hacking away at a large tree with an object resembling an axe. 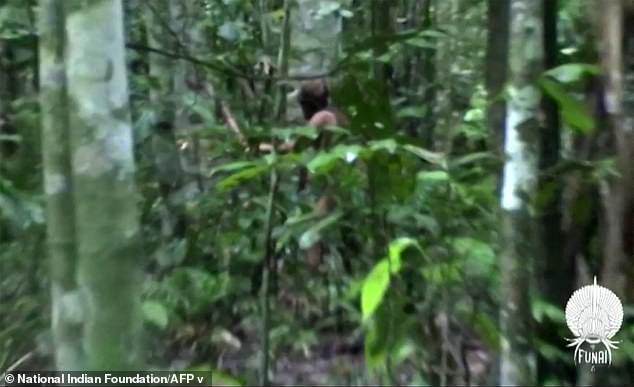 The man made clear he wanted nothing to do with anyone, once seriously wounding a FUNAI visitor by shooting them with an arrow

The Man of the Hole called about 8,000 hectares of undeveloped rainforest home. He was surrounded by cattle ranches and soy plantations. FUNAI staff had to keep finding proof that he was there — or risk the government giving in to pressure from ranchers to allow the jungle to be razed for yet more agricultural land.

In 2009, protection officers on a routine patrol of the area found empty shotgun cartridges on the ground. It was assumed that ranchers, who had frequently complained about a single indigenous tribesman sitting on so much land, had paid hunters to kill him. Clearly, however, they failed.

No doubt he knew several hiding places: if direct sightings were rare, his trail was easier to follow. Wherever he went, he built straw and thatch huts — 53 in all — with a single entrance and, inside, a hole up to 10 feet deep and sometimes lined with sharpened stakes. Of all the indigenous peoples in the region, only he dug the holes. Experts believe that while the holes had a practical purpose, they sometimes contained strange ‘scratch marks’ on the walls, suggesting they also held some kind of mystical significance.

As well as having a bow and bamboo arrows for hunting, the man cultivated gardens and grew papaya, cassava and corn. Visitors describe his gardens, hewn out of clearings where he’d cut down each tree, as beautifully kept. 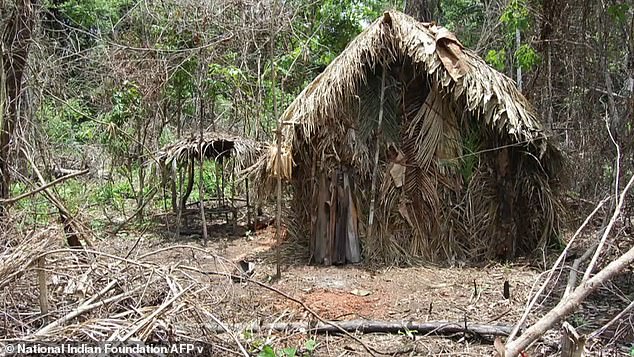 Wherever he went, he built straw and thatch huts (like the one pictured) — 53 in all. He also cultivated gardens and grew papaya, cassava and corn

Fiona Watson visited in 2005 and described the experience as ‘eerie’, adding: ‘His presence is everywhere and I can sense him watching our every move.’

The border region of Brazil, Peru and Bolivia contains the highest concentration of the estimated 100 uncontacted tribes on the planet, seasonally crossing back and forth over the national borders in small, extended family groups.

Experts believe they reject contact with the outside world because they know the likely consequences — death and disease.

During the Amazon rubber boom around the turn of the 20th century, thousands were killed or enslaved. Following millennia of isolation, their immune systems are vulnerable to common infections. Even a cold could kill them. 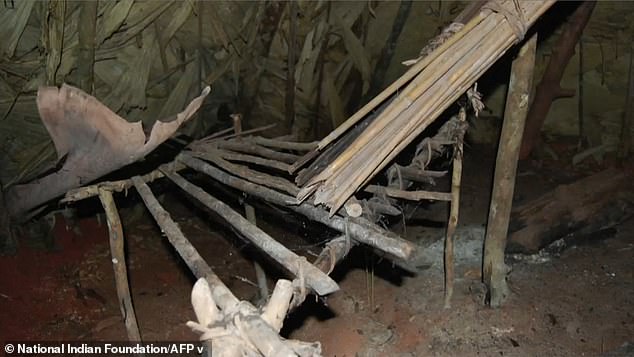 His huts had a single entrance and, inside, a hole up to 10 feet deep and they were sometimes lined with sharpened stakes

However, the pressures on them are growing. Illegal logging has forced uncontacted Peruvian tribes to flee over the border into Brazil. Tribes have also fallen foul of drug traffickers, illegal miners and loggers (the area is rich in tropical hardwoods as well as oil and gas).

Given Brazil’s populist president Jair Bolsonaro and his emphatic support for mining, logging and ranching in the Amazon, those who would drive out the tribes have been emboldened in recent years. This has led to an upsurge in violent attacks on these people, say human rights organisations.

The death of the Man of the Hole should be a ‘wake-up call’ to the Brazilian government to treat the plight of uncontacted people as an emergency, said Fiona Watson, adding: ‘A very important part of rich human diversity is gone for ever.’ He had shown, she added, ‘extraordinary courage and resilience’ in continuing to live in complete isolation for so long.

Campaigners passionately believe that uncontacted tribes should be allowed to choose whether to engage with the rest of the world or live apart from it.

Given the terrible fate of his tribe, the determination of the World’s Loneliest Man to have nothing to do with the rest of us seems entirely understandable. 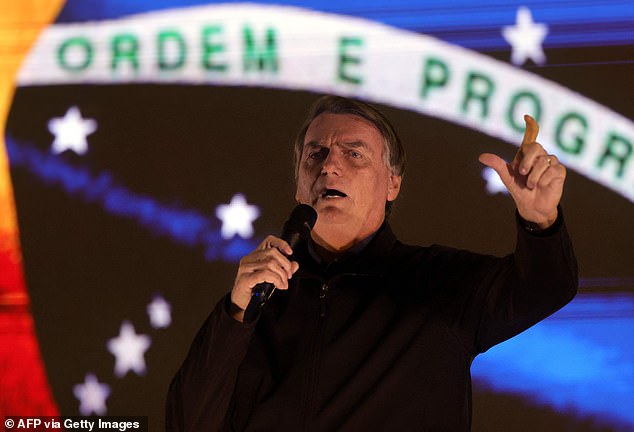 Given Brazil’s populist president Jair Bolsonaro (pictured giving a speech on Saturday) and his emphatic support for mining, logging and ranching in the Amazon, those who would drive out the tribes have been emboldened in recent years