Looking for a career change? How coding boot camps could make tech jobs a reality

These were Annie Cochran’s jobs to pay her bills a year ago: freelance graphic designer. Contractor. Model and whiskey sales representative.

She ditched those gigs to pursue a career in tech. Now Cochran, who lives in Cincinnati, leads a team of software engineers to ensure online deliveries go smoothly for the Kroger grocery chain.

Around the same time, Wes Woods struggled to make ends meet. He was a bartender, a DJ and a delivery driver in Cleveland. He, too, made a similar career pivot to tech and now works as a software developer at J.P. Morgan Chase in Columbus, Ohio.

Both were recipients of Represent Tech, a scholarship to get more women, people of color, and those in the LGBTQ community working in tech. It’s part of Tech Elevator, an intense 14-week software developer training program also known as a “coding boot camp.”

“I took a bet on myself. I didn’t have any coding background besides putting sparkles on my MySpace page back in the day,” said Woods, 34. “It’s rigorous work in a short span, but if you want something bad enough to change your life, you’ll find a way to do it.”

Woods is among the more than 3,100 students nationwide who graduated from Tech Elevator, now considered one of the top-ranked coding boot camps in the U.S. by the Council on Integrity in Results Reporting (CIRR), a nonprofit that reviews boot camps and report their data, and the Course Report, an online research platform.

For Cochran and Woods, their unique entries into the competitive tech workspace also come at a juncture when women and underrepresented groups in tech still remain dismal.

Women hold about a quarter of all jobs in tech, while Black Americans have 7% of employment, Hispanic Americans have about 8% of jobs, and Asian Americans about 20% of positions, according to a report of various statistics compiled by Zippia.com.

Women also hold about 28% of supervising jobs in tech, the Zippia study shows.

“It’s exciting,” said Cochran, 36, who has been working in Kroger’s technology and digital division since May. “I have a great team that works so collaboratively.”

Back to work: Women from 25 to 54 are returning to the job market

‘We shouldn’t have to tolerate it’: More Asian Americans are calling out the racism they experience at work

Are coding boot camps worth it?

While coding boot camps have been seen as popular routes for computer science training, some problems have been reported.

In July, three students reached settlements with the San Francisco-based Lambda School (now called Bloom Tech). The students claimed that the school misled them either through inflated job placement rates or by having them sign income sharing agreements, or ISAs which let students defer most or all of the tuition payments until after they get a job.

Similar to doing research while looking for a college, aspiring students should do their due diligence with coding boot camps, said Liz Eggleston, co-founder of Course Report.

She said students should consider available free coding courses and ask for data on graduation and job placement rates.

“Any reputable boot camp should be able to give you that information,” Eggleston said.

The short road to a career in coding

They’re offered in an effort to bring more employees into the in-demand tech sector which contributed around $1.8 trillion to the U.S.’ overall economy and about 9.3% of total the country’s total gross domestic product (GDP), according to business data website Statista.

Completing a tech boot camp is “one big piece of a large puzzle” to get a lot of job offers in your inbox, said Kyle Elliott, a career coach who works with Silicon Valley’s high-end talent.

“It is not a golden ticket to landing a job in tech,” Elliott said. “There’s also networking, building your portfolio, having a clear objective, and setting realistic expectations.”

Eggleston said coding boot camps are similar to traditional vocational training programs that teach skills like becoming a mechanic or a welder.

Some boot camps offer courses ranging from 14 to 24 weeks, or even up to a year. In addition to Tech Elevator, other notable boot camps include the Flatiron School, Launch Academy, Caltech, Codeacademy, Fullstack Academy, Thinkful, Coding Dojo, and App Academy.

Roughly about 25,000 students in the U.S. and Canada graduate annually from full-time immersive boot camps that last for 10 to 14 weeks with an average tuition of $14,000, Course Report’s Eggleston said.

In a study of nearly 400 boot camps by Swtichup.org, the average employment rate for boot camp graduates at five of the biggest tech companies is around a respectable 6%, as competition is fierce for those positions.

And another study conducted by the Council on Integrity in Results Reporting (CIRR) said about 71% of coding boot camp graduates found jobs within 180 days.

“You’re not just paying for the curriculum and knowledge that comes with a coding boot camp, but also for their resources and access to the companies they partner with,” said Elliott, the career coach.

Tech Elevator says its graduate job rate is about 90%, Launch Academy says its rate is about 78%, and Codesmith in Los Angeles is at about 83%, according to their respective sites.

Because coding schools are privately owned and operated, they are not subjected to accreditation similar to colleges and universities with the Department of Education or the Council on Higher Education Accreditation.

Instead, many coding schools self-report their data to the nonprofit CIRR, which audits on-time graduation rates, those working full-time six months after graduating, and their average salaries. 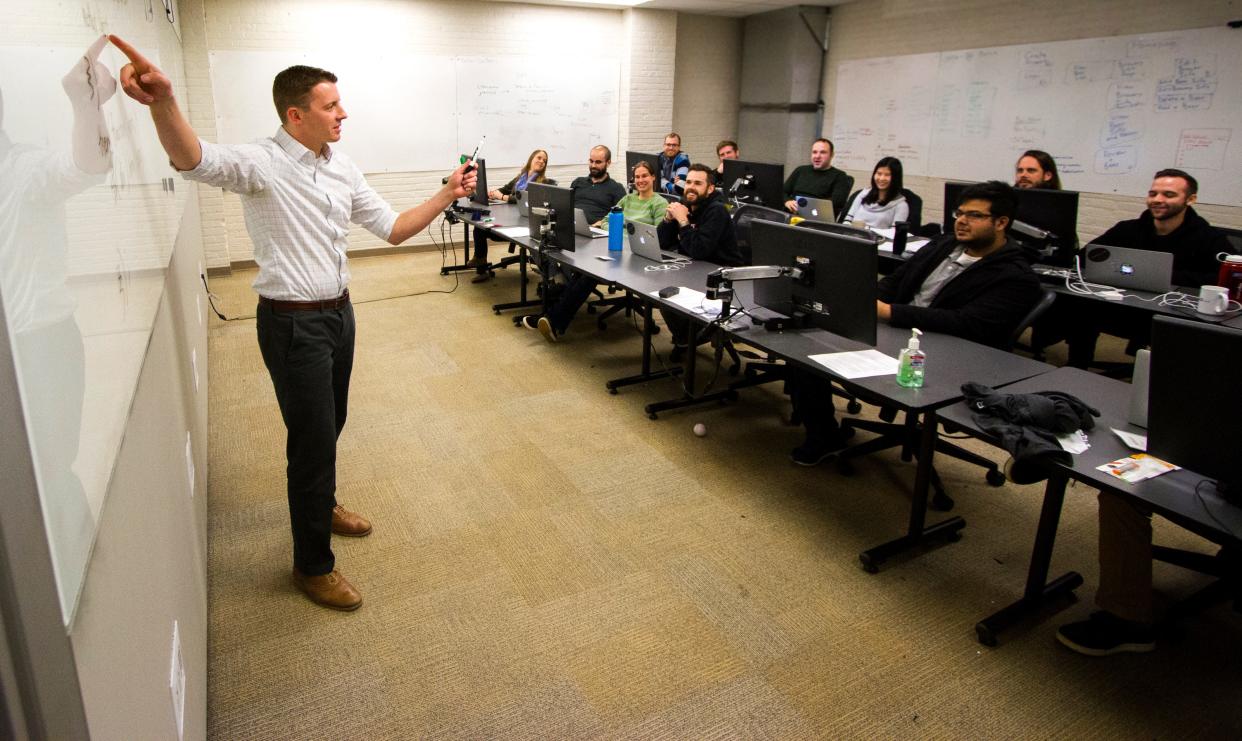 How much does a tech boot camp cost?

Tech Elevator’s boot camp cost is nearly $16,000, its site said. Cochran and Woods each received a Represent Tech scholarship, roughly $13,175, that covered a majority of their tuition.

More than $1.1 million in scholarships has been awarded to nearly 100 students since Represent Tech began in 2020, Tech Elevator said. Additionally, the organization said 90% of overall scholarship recipients graduate and 94% of them find a job.

The average age of students is 31 as most don’t come straight out of high school or college, said Monika Royal-Fischer, a campus director at Tech Elevator’s Cincinnati location.

“In fact, we don’t expect you to have ever touched a line of code,” Royal-Fischer said. 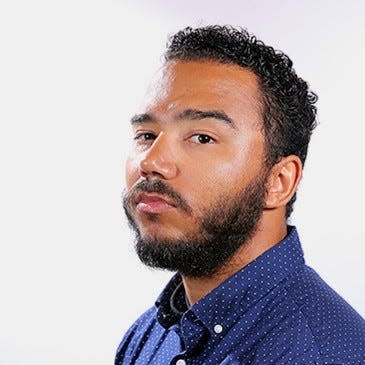 Wes Woods said he was always interested in technology, he just didn’t know how to get into the field after getting his associate’s degree in applied science at a Cleveland community college.

He was grinding with his multiple jobs until his then-girlfriend urged him to really commit to getting a tech job. He heard about Tech Elevator and applied. Days later, Mordarski called Woods, who was in the middle of a delivery route, that would take him down a new path.

“After that chat, I was invited to take the assessment to get into the program. Marty was the one who delivered the news to me that I was accepted,” said Woods who also received a Represent Tech scholarship and kept working on weekends to make ends meet.

He also believes that Tech Elevator’s Pathway Program, which pairs students with a professional coach, sharpened his skill set to prepare for interviews with potential employers.

But Woods had some doubts two months after graduating and seeing some of his classmates already lined up with tech jobs. “I was getting anxious,” Woods said. “I’ve got to pay rent and wondering, ‘Am I going to have to do bartending full-time?'”

He had a heart-to-heart with his Pathway director Katie Schrader about his “limbo” state. Soon, Woods got a call from JP Morgan Chase for a job interview. He was later offered a software developer job to work in either New York City, Chicago, or Columbus, Ohio.

Woods chose Columbus to be closer to home and the city’s lower cost of living. He works on a team at JP Morgan Chase called Regulators and it works on Consumer & Community Banking, or CCB.

“This has been a life-changer for me,” he said.

MORE WORK TO DO: A new gender gap surfaces. Men recovered all jobs lost during the pandemic. Women have not.

Before her current job , Annie Cochran admits having some tough times.

Two years ago, she returned home to Northern Kentucky from England. Cochran had a small catering company and a baking business there when she split up with her husband who worked overseas as a researcher.

Cochran said the split, and subsequent divorce took their toll.

Cochran’s brother, a software developer, encouraged her to give his profession a shot.

“The more I looked into it, I thought (being a developer) really is about solving problems, using logic and your creativity, something that I would really enjoy and be challenged that’s also learning and enriching,” Cochran said, who has degrees in Spanish and literature.

She looked into Tech Elevator in Cincinnati and thought she could afford the tuition – if she kept her multiple jobs and got a corporate sponsor to help offset costs. The sponsorship didn’t materialize, but Tech Elevator insisted Cochran apply for a Represent Tech scholarship, which she got last September.

Cochran’s supervisor at Kroger, Yuka Sakumoto-Schmidtsaid Cochran is “building strong partnerships” and “a great culture” with her engineering team.

“She is quickly wrapping her arms around the technical product she owns and is connecting the dots in a highly complex environment,” Sakumoto-Schmidt said.

At Kroger, Cochran helps run the national grocery chain’s new Boost customer loyalty upgrade, where an annual membership gives customers unlimited grocery deliveries on orders of $35 or more and fuel discounts of up to $1 per gallon.

“Switching careers is definitely scary,” Cochran said. “But if you’re not feeling challenged enough, don’t be afraid to take a leap of faith.”

This article originally appeared on USA TODAY: How coding boot camp can lead to new career path with a tech job