LOUISE PERRY reports on the creeping war against motorists

How long before the Traffic Taliban make driving so miserable we’ll never get in our cars again? LOUISE PERRY reports on the creeping war against motorists as dozens of LTNs pop up across the country

Not far from our home in South London, some large, colourful flowerbeds are at the centre of a nasty row. Set up in the middle of a junction that is now dubbed ‘Dulwich Square’, these planters filled with geraniums were installed to block the traffic that used to run between the South Circular and Central London.

They are designed to protect residential roads from noise and pollution as part of a controversial Low Traffic Neighbourhood (LTN) scheme, one of a flurry that were introduced in 2020 with £225 million in emergency government funding, which was allocated to councils to encourage walking and cycling.

In this mission creep in the war against the motorist, dozens of LTNs have popped up all over London, as well as in York, Bath, Sheffield, and Manchester. In Cambridge, it was reported that residents are outraged over the prospect of a £5 charge being introduced if they want to drive their car into the city centre.

And now in Oxford there are new proposals to divide the city into zones — with strict rules limiting the number of times drivers can leave their neighbourhoods in their cars. 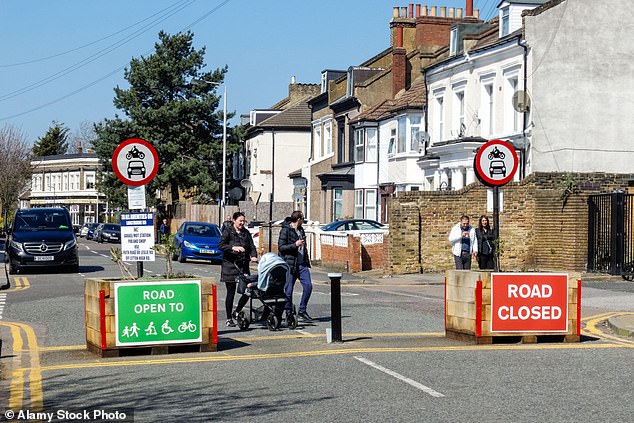 In this mission creep in the war against the motorist, dozens of LTNs have popped up all over London, as well as in York, Bath, Sheffield, and Manchester

Dulwich residents whom the scheme near my home is meant to benefit are not entirely supportive. They believe that all these measures do is push traffic on to larger ‘arterial’ streets, while depriving local businesses of customers, forcing some to shut up shop because of plummeting footfall.

And those that survive often find their turnover has been hit badly. The owner of a pizzeria in East Dulwich says his restaurant has lost 40 per cent of its customers.

Residents suffer too. One father who uses taxis to take his disabled son to school says the scheme has cost him £100 a week in increased fares because of the build-up of traffic on the route.

Ardent eco-warriors claim that this is all worth it in the name of lower emissions. Yet this argument is crumbling under the weight of contradictory evidence. Figures released this week by the Department for Transport reveal that LTNs have spectacularly backfired, actually increasing the total number of vehicle miles travelled.

The problem has its roots in the pandemic and lockdowns. Traffic levels plummeted and the virtue-signalling Traffic Taliban saw their opportunity. Emergency rules allowed them to implement measures to make our streets permanently quieter and less polluted without any consultation with residents.

But, as anyone could have predicted, with the end of the lockdowns came a return to normal traffic levels. And in the ten London boroughs that introduced LTNs in 2020 by blocking off the central thoroughfares, total vehicle miles increased last year by 11.4 per cent. In the two London boroughs that didn’t, the rise was only 8.9 per cent.

This is because the LTNs force motorists to take longer routes to get around the new barriers.

In Dulwich, the conflict has grown particularly heated. A public consultation found that two-thirds of residents want the council to remove the LTNs. Last week, 1,000 people staged a protest in Dulwich Square. 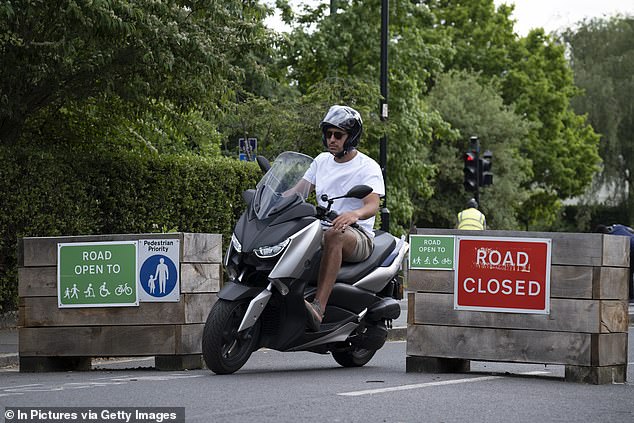 Dulwich residents whom the scheme near my home is meant to benefit are not entirely supportive. They believe that all these measures do is push traffic on to larger ‘arterial’ streets, while depriving local businesses of customers, forcing some to shut up shop because of plummeting footfall

Road blocks and LTN signs have regularly been vandalised, and last year a pair of furious moped drivers tried to throw chairs through the window of a cafe in Dulwich Square after customers told them not to drive through the area. But it’s not just motorists who feel slighted — the scheme is also turning neighbour against neighbour.

Our local LTN has been lovely for the people of affluent Dulwich Village, whose quiet neighbourhood is now even quieter.

On streets surrounding Dulwich Park, the lucky residents of the large detached houses — worth upwards of £2-3million — are able to amble down the middle of their leafy avenues and allow their children to play in the street without fear.

But little more than half a mile away, the people of neighbouring East Dulwich Grove — where the house prices are comparatively low — are furious, since their road is now permanently choked with traffic. A survey conducted by a local organisation found that an overwhelming 86 per cent of East Dulwich Grove residents objected to the LTN.

And research backs up what these residents instinctively feel to be true: it is the wealthiest homeowners who are benefiting most from LTNs.

In fact, across the country average property prices within these zones are up to 70 per cent higher than on the roads that surround them.

Supporters of the LTN scheme bleat that the solution to this traffic problem is for people simply to ditch their cars and walk, cycle, or take public transport instead. But not only is this proposal impractical, it’s positively cruel.

Before I had a baby, I had no idea how unfriendly public transport really is to anyone who isn’t completely able-bodied and unencumbered.

Let’s say you are a parent with three children, one of whom needs to be dropped at nursery, and the other two then taken to a primary school on the other side of the LTN — a journey of only 1.2 miles, which would normally take mere minutes to drive. Now, though, your driving route is more than twice as long, and impeded by traffic created by the LTN.

It would be nearly impossible to travel with three children in a cargo bike, and you’d be lucky if there was a bus that served the entire route.

Supporters of LTNs might argue that the hostility of the public transport system is a temporary problem which only applies to parents of small children. But how on earth do disabled people cope?

The answer, usually, is that they don’t. Data collected by the Department for Transport reveals that disabled people are much less satisfied with public transport than non-disabled people, and are much more likely to travel as a passenger in a car.

And those not lucky enough to have access to a vehicle of their own often end up stuck in their houses, unable to go out at all, or else suffer through long and miserable journeys to vital engagements such as doctors’ appointments. No wonder Dulwich’s elderly population is speaking out against the scheme.

‘Age means that we cannot move around as easily as when we were young,’ says Joan Evans of Age Speaks, which represents more than 100 elderly and disabled Dulwich residents.

‘Walking is often painful and slow, carrying more than small loads difficult [and] cycling (with some energetic exceptions) unthinkable.’

It might seem surprising that Southwark Council — responsible for the ‘Dulwich Square’ initiative — has remained deaf to public opinion. Perhaps less so when you consider that these schemes have become something of a cash cow for local authorities.

Southwark officials issued more than £8 million in £65 fines for offences recorded by only five cameras in Dulwich between January and December 2021. That’s 340 fines a day.

It’s the same story with Labour and Green councils up and down the country. Yet, alarmingly, Oxford City Council is taking this anti-car agenda even further.

Dissatisfied with their standard LTN, Oxford is now planning a scheme which would see cars banned from driving without a permit at peak times on six roads across the city.

The plan is fuelled by a desire to reduce traffic drastically in the centre, it seems, at whatever the cost to local people.

Plans are being met with pleas of desperation from some residents.

‘As a father with a son with severe autism,’ pointed out David Henwood, a former Labour and now independent councillor for Cowley Ward in Oxford, ‘getting him to his special needs school has increased his anxiety and journey times, and this has further burdened similar families.’

He will be lucky if anyone pays any attention to his protests. Oxford politics has always been skewed by the presence of its two large universities.

During term time, almost a quarter of Oxford adult residents are full-time students — the overwhelming majority of whom are childless, able-bodied, and not looking after elderly or disabled relatives.

Of course these young adults are going to be in favour of the council’s war on cars, particularly when it’s presented as a woke, eco-friendly endeavour.

They can virtue-signal without any cost to themselves.

But across the country, these measures are causing so widespread misery, dividing neighbourhoods and only making traffic worse.

Now that we have proof that they do not achieve their environmental aims, councils across the country must think again.

It’s time to scrap these ill-conceived schemes — and undo the anguish they have caused to so many.