The driver of a school bus that crashed down a steep embankment on the Western Highway has been praised for climbing back into the wreckage to free injured students and teachers, despite being hurt himself.

Little’s Coaches bus driver Wayne, who does not want his surname published, is recovering at home in Ballarat after his bus collided with a truck and rolled several times down the embankment before coming to a rest on its side. 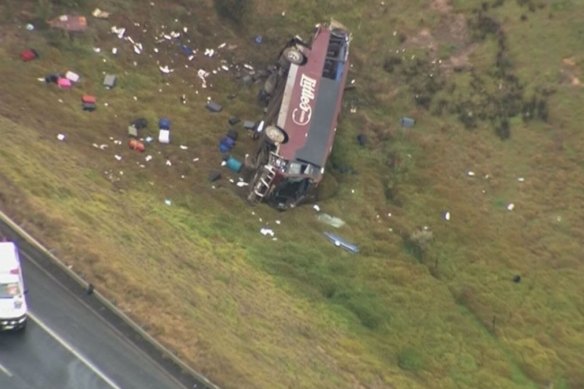 Thirty-three people, including 27 schoolgirls, were taken to hospital following the crash.Credit:Nine News

Wayne was ferrying 27 students and several teachers from Loreto College Ballarat to the airport to attend a NASA space camp in the United States when the bus was rear-ended by the truck and shunted from the road at Bacchus Marsh about 3am on Wednesday.

Two teenage girls were airlifted to hospital with serious injuries. Five students needed to be cut from the wreckage and paramedics took 33 people to six different hospitals.

Tow truck company owner Trevor Oliver, who was among the first on the scene, praised Wayne for his actions after the crash.

He said the 56-year-old driver had done a “magnificent job” helping the schoolgirls, despite being injured.

“He refused to go to hospital until every girl had left that accident scene,” he told ABC radio.

“It was like the captain of the ship going down.”

Bus Association Victoria director Chris Lowe said Wayne was an experienced driver whose sense of community responsibility kicked in immediately after the crash.

“He’s a hero in this whole affair. He managed to get [a number of] souls including himself off the bus and render assistance and care for them until such time the emergency services arrived,” he said. 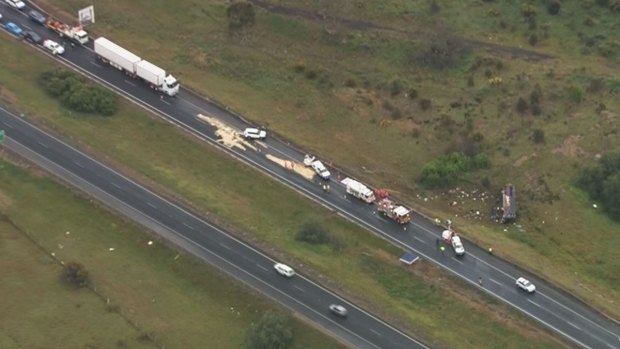 “That’s just what bus and coach drivers do. They have an extraordinary sense of community of responsibility.”

Lowe said Wayne had been discharged from The Alfred hospital and had returned home to Ballarat, where he was nursing a sore leg and being supported by his wife and two sons.

He said Wayne went into shock following the crash but has received some counselling and is doing well.

Lowe said most people on board the bus were wearing seatbelts when it crashed, which had contributed to saving their lives. 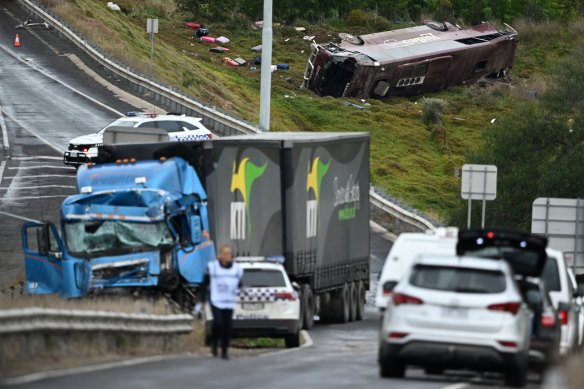 The badly damaged truck and bus that collided in Bacchus Marsh.Credit:AAP

“The situation could have been a whole lot worse had it not been a seatbelted bus or had more students not been wearing seatbelts,” he said.

Oliver, the tow truck driver, agreed, saying some girls were stuck hanging from their seats, with fellow students assisting in the rescue. He said one girl’s leg had been partially amputated.

Images of the crash site taken hours after the accident show debris, suitcases and other personal belongings strewn all over the grassy embankment. Paramedics treated more than 30 people at the scene.

Ben Amor, the owner of the bus company, also drove to the crash site in a coach to take some students to Ballarat Base Hospital as ambulance crews struggled to transport all of those involved.

Three students who were taken to the Royal Children’s Hospital were in a stable condition on Friday, including a girl with lower-body injuries.

The truck driver, a man aged in his 50s, remained at Royal Melbourne Hospital in stable condition on Friday after suffering lower-body injuries.

Loreto College opened on Thursday to provide counselling and support to students, despite the public holiday to mark the death of Queen Elizabeth II.

In a statement, the school said the students and their families had been overwhelmed and heartened by the support of the Ballarat community.

An image shared online by the college showed a shrine decorated with blue and pink silk cloth, candles, fairy lights and flowers.

“We extend our sincere thanks to all and continue to keep all those recovering in our prayers,” the school said.

On Thursday, the college warned parents and members of the public against making donations online after becoming aware of a fundraising campaign using the school’s logo without permission.

The fundraiser, which had been set up on the popular online platform GoFundMe, has since been taken down.

“Loreto College has not approved any GoFundMe accounts and cautions against these sites,” the school wrote on Facebook.